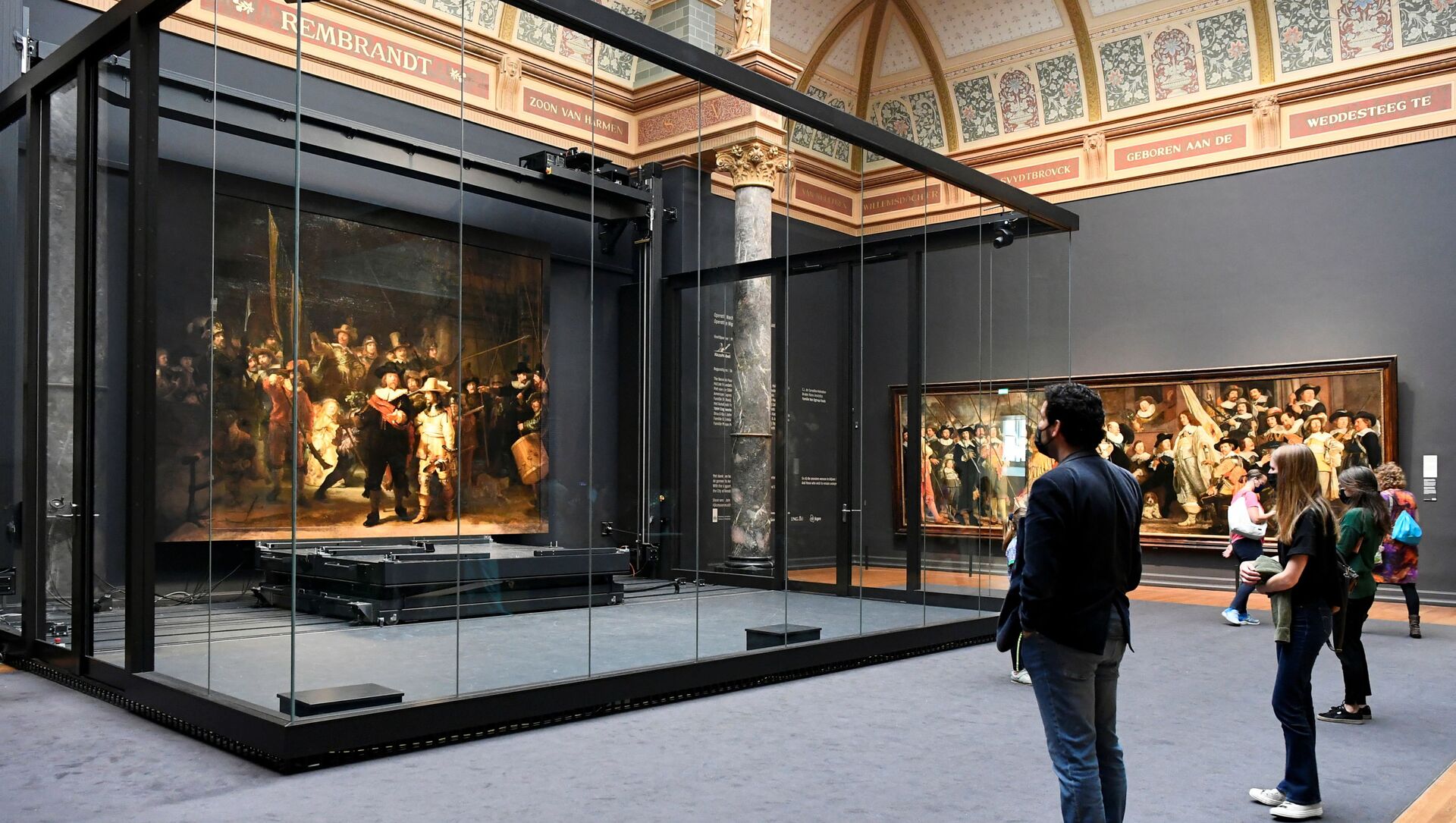 Kirill Kurevlev
Correspondent
All materialsWrite to the author
The painting was commissioned by the Kloveniers, a detachment of the civilian militia of the Netherlands, in 1642. In the 18th century, it was cropped on all sides so that it could fit inside Amsterdam's city hall at 363 cm × 437 cm (142.9 in × 172.0 in). The left side of the painting suffered the most, from which two militiamen were removed.

One of Rembrandt van Rijn's most famous works has finally been restored to its original, even bigger size, thanks to a combination of art and artificial intelligence to recreate elements of the master's classic painting that were chopped off approximately 70 years after he completed it.

The printed strips are now flush with the margins of the 1642 picture in the Honor Gallery of Amsterdam’s Rijksmuseum. The museum's addition restores the work's original off-center focal point, which was intended by Rembrandt.

"It can breathe now,” museum director Taco Dibbits is quoted in the AP report about the work as saying.

Captain Frans Banninck Cocq and Lieutenant Willem van Ruytenburch, the two primary actors in the crowded picture, are central in the chopped-down painting. The major figures are effectively pushed to the right with the additional digital embellishments, particularly a strip on the left of the picture that contains two men and makes it clear that a youngster is staring over a railing.

Researchers and restorers used a battery of high-tech scanners, X-rays, and digital photography to methodically examine the work for nearly two years, combining the massive quantity of data they collected with the 17th century smaller copy, attributed to Gerrit Lundens, to reproduce and print the missing strips.

"We made an incredibly detailed photo of the Night Watch and through artificial intelligence or what they call a neural network, we taught the computer what color Rembrandt used in the Night Watch, which colors, what his brushstrokes looked like," Dibbits said.

The museum was also able to correct perspective distortions that were evident in the Lundens copy due to the artist sitting in one corner while painting Rembrandt's work.

The artwork was cut for the most trivial reason since it could not fit on a wall between two doors when it was transported from the commissioner militia's clubhouse to the town hall. After some very basic clipping with a pair of scissors, the painting took on the dimensions that have now been established for generations of viewers. The destiny of the canvas pieces that were clipped off is unknown.

‘Can Only Have Been Painted by a Madman’: Museum Confirms Graffito on Munch’s ‘Scream’ is by Artist
During World War II, the painting fell into the hands of the Nazis. It was rolled up in storage, which also negatively affected the safety of the canvas.

The 1642 masterpiece, which was slashed by a knife-wielding assailant and is now showing blanching in portions of the canvas, was last restored more than 40 years ago.

The new printed additions, according to Dibbits, are not designed to deceive visitors into thinking the artwork is bigger than it is, but rather to give them a clear understanding of what it was supposed to look like.

"Rembrandt would have definitely done it more beautifully, but this comes very close," he concluded.