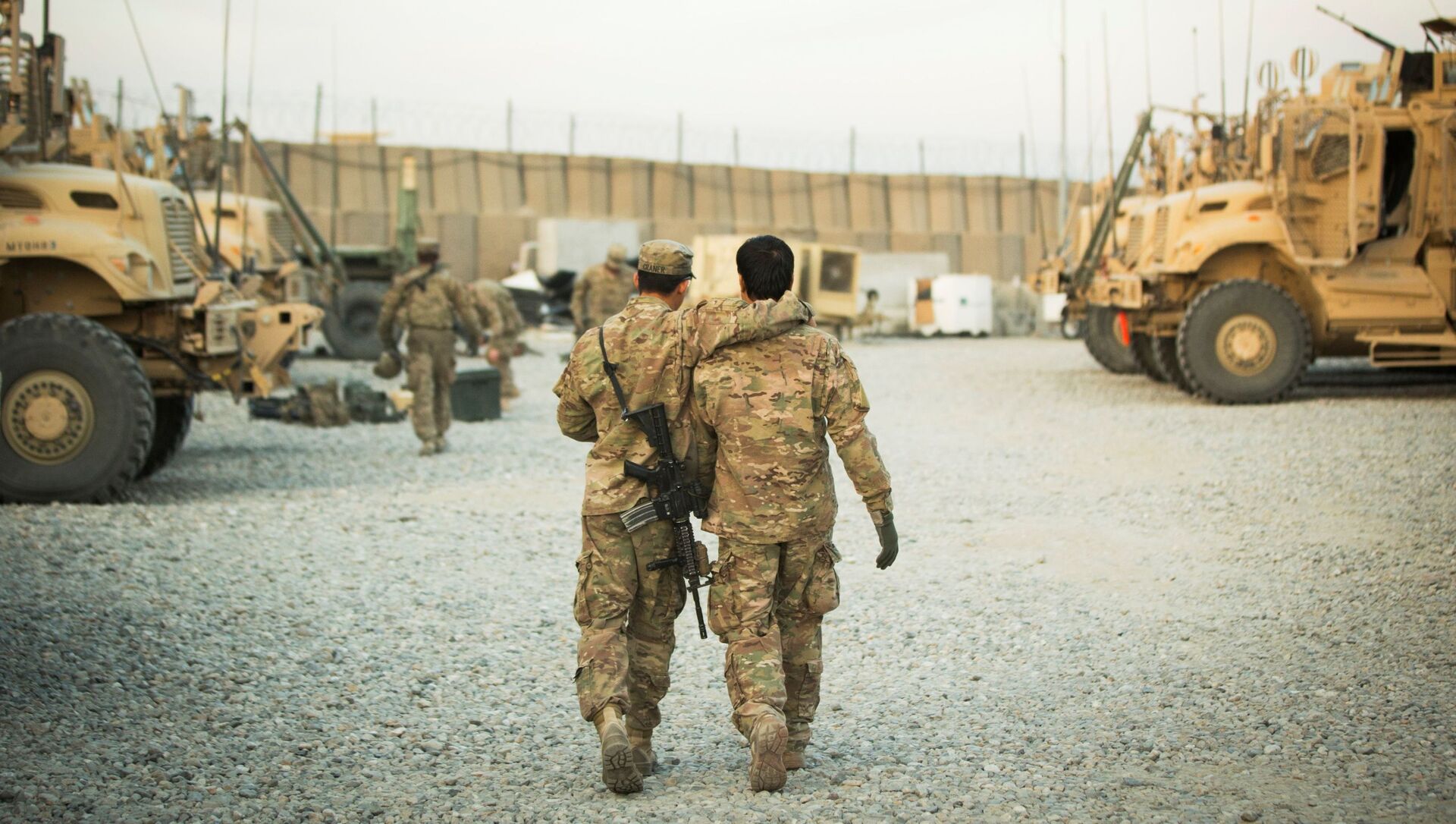 © REUTERS / Lucas Jackson
Subscribe
International
India
Africa
Ilya Tsukanov
All materialsWrite to the author
The move comes in the wake of fears in the US intelligence community that the Afghan government may collapse within six and 12 months of the completion of the US withdrawal from the war-torn nation.

The Biden administration is getting ready to evacuate “thousands” or even “tens of thousands” of Afghans who assisted US forces during the 19+ year war to third countries before they can apply for entry into the United States, the New York Times reports, citing unnamed senior administration officials said to be familiar with the situation.

The people in question – among them interpreters, drivers, security guards, embassy clerks, engineers and others who worked to smooth the US’s generation-long occupation of the country – have been struggling in their attempts to apply for special immigrant visas, with thousands said to have been "trapped in bureaucratic limbo" of the application process.

US lawmakers and the Pentagon have put increasing pressure on the Biden administration to step up protections for these individuals, amid fears that a resurgent Taliban may carry out revenge attacks against them.

Officials did not specify which third countries the persons in question would be made to wait in, or whether the proposed countries have even agreed to take them in, but confirmed that some 18,000 people and 53,000 members of their families have applied for the US visas.

The United States has a special immigrant visa programme for Afghans who face threats in their home country for their work for or on behalf of the US government, but applicants have run into difficulties amid the large number of applications, stringent entry requirements, lack of staff and problems said to be associated with the coronavirus pandemic. NYT’s sources insist that the problem is being dealt with, with the White House ‘working to streamline’ the process and adding personnel to handle the applications. The cap for the visa programme was raised from 4,000 to 26,500 in December.

One official told the NYT that the evacuation would include both the US employees and their families, but also warned that the movement of the people out of Afghanistan was not a guarantee that they would eventually be allowed to enter the United States. It was not made clear to the newspaper whether the persons rejected for a visa would be forced to go back to Afghanistan or stay in the third country indefinitely.

President Biden is set to meet his Afghan counterpart Ashraf Ghani on Friday to discuss the escalation of violence, and to call for "unity" among Afghan leaders against the Taliban. Biden is also expected to promise Ghani continued US security and humanitarian assistance, with the former reportedly valued at some $3.3 billion.

Asia
Tajikistan's Border Guard on High Alert Amid Crisis in Afghanistan's Kunduz, Official Says
Pentagon chief Lloyd Austin told a congressional budget hearing Wednesday that he was “confident that at some point,” the US would “begin to evacuate some of” the Afghan nationals assisting the US. At the same hearing, Joint Chiefs Chairman Mark Milley said that “taking care” of the Afghans who have assisted the United States was a “moral imperative,” and that his office was “prepared to execute whatever we are directed.”

The US and its NATO allies began their “final” exit from Afghanistan in May after nearly two decades of war. President Biden has promised that US troops would be out of the country completely by the 20th anniversary of the 9/11 attacks, with US security and "counterterrorism" operations to be limited to air, drone and missile strikes after that.

The US was originally supposed to leave  Afghanistan by 1 May, 2021, in accordance with the US-Taliban peace deal approved by the Trump administration, but Biden delayed the process after stepping into office in January.

In his withdrawal speech, Biden urged Russia, China, India and other countries to step up and “do more” to support Kabul against the Taliban, which is now active in almost every region of Afghanistan. Beijing has expressed concerns over the speed of the US exit, suggesting that a “hasty withdrawal” has already “dealt a serious blow to the peace process” and “negatively affected regional stability.”

Asia
Russian Defence Minister Believes Civil War in Afghanistan is Possible After NATO Withdrawal
On Wednesday, Russian Defence Minister Sergei Shoigu warned that the Western exit from the country makes it “highly probable” that the decades-old Afghan civil war will resume, “with all its negative consequences,” including “the spread of extremism to neighbouring states.”

Also Wednesday, the Wall Street Journal reported on a US intelligence community assessment which warned that the Afghan government could collapse within six to 12 months of the US withdrawal, or even in as little as three months.

Afghanistan is the longest war in American history. Over 100,000 Afghan civilians and security forces personnel, tens of thousands of Taliban fighters, 3,500 US and coalition troops, and 4,000 Western mercenaries have been killed in the conflict, with hundreds of thousands more injured and millions fleeing. The west Asian nation has been wracked by instability for over two generations, with the current conflict’s roots going back to the Cold War and CIA support for jihadist militants fighting the Afghan government and its Soviet allies.