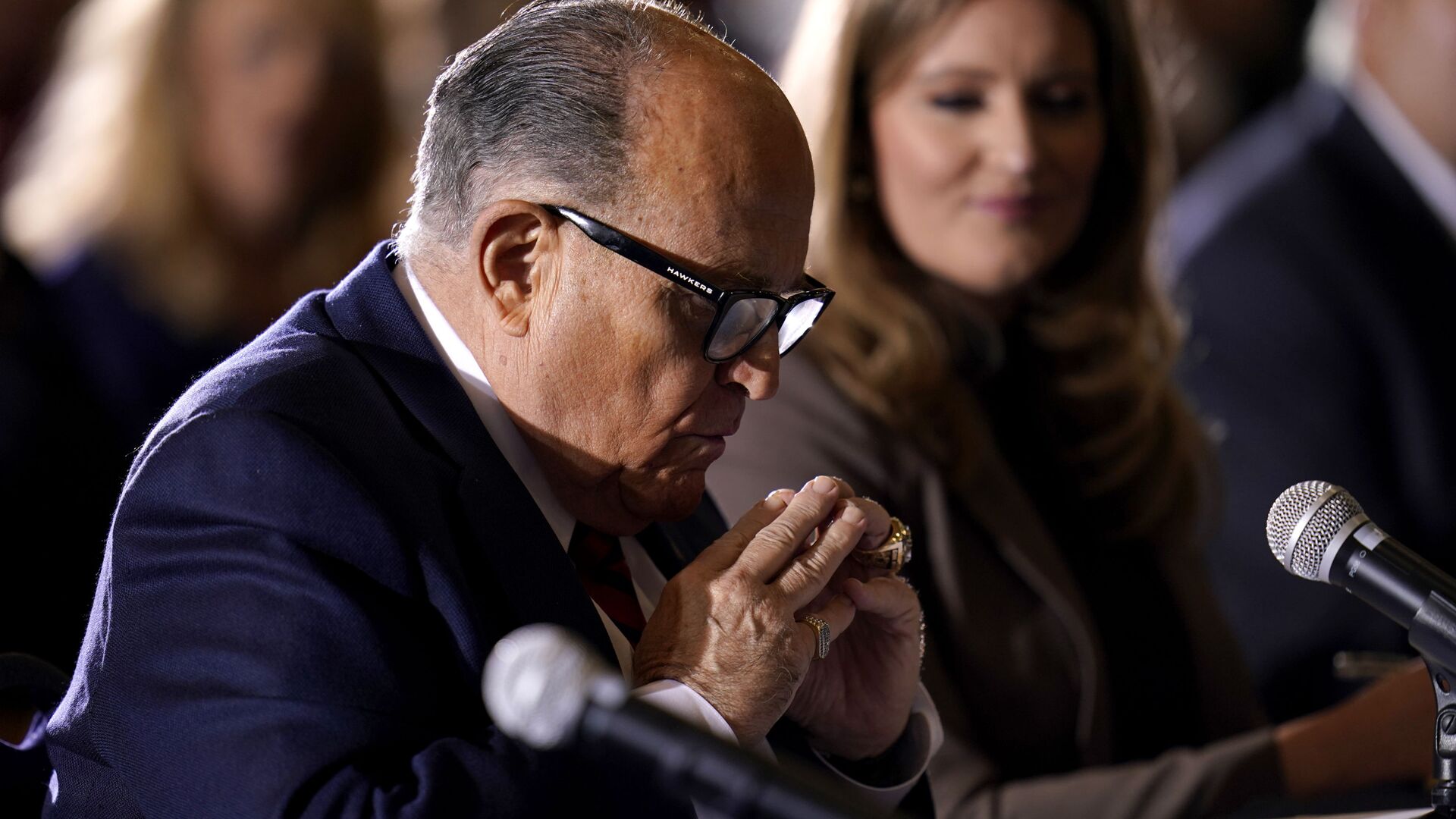 Ilya Tsukanov
All materialsWrite to the author
The 77-year-old attorney and former New York City Mayor was central to Donald Trump's probe into suspected pay-to-play politics by Joe Biden in Ukraine during the Obama years, which itself sparked impeachment proceedings against Trump. In late 2020, the lawyer represented Trump in lawsuits to overturn the election over alleged fraud.

New York State suspended Rudy Giuliani's licence to practice law on Thursday over the "false statements" he allegedly made in his capacity as President Trump's lawyer in the aftermath of the 2020 presidential election.

"For reasons that follow, we conclude that there is uncontroverted evidence that [Giuliani] communicated demonstrably false and misleading statements to courts, lawmakers and the public at large in his capacity as lawyer for former President Donald J. Trump and the Trump campaign in connection with Trump's failed effort at reelection in 2020," the New York Supreme Court said in a 33-page decision put out on Thursday morning.

"These false statements were made to improperly bolster [the] respondent's narrative that due to widespread voter fraud, victory in the 2020 United States presidential election was stolen from his client. We conclude that [the] respondent's conduct immediately threatens the public interest and warrants interim suspension from the practice of law, pending further proceedings before the Attorney Grievance Committee," the statement added.

The court went on to list Giuliani's alleged improper activities, including his comments on the election at press conferences, legislative hearings, media appearances, and one court appearance.

Giuliani is said to have defended himself by suggesting that the AGC's probe violated his First Amendment right to free speech. The court indicated that it "rejects" this argument, however, citing a legal precedent which recognises that "speech by an attorney is subject to greater regulation by speech by others."

FBI Helped Organise and Coordinate Capitol Unrest, Tucker Carlson Claims in Bombshell Report
The decision went on to list off the attorney's misconduct, including his comments after 3 November about a host of alleged problems with the election, including possible mail-in ballot vote dumps, voting machine irregularities, and other suspected manipulations in then-Democratic candidate Joe Biden's favour in key battleground states including Pennsylvania, Georgia, and Arizona.

Last month, New York Judge J. Paul Oetken ordered the appointment of a "special master" to review evidence seized from Giuliani's home and office in an FBI raid in April after the attorney complained that some of the materials may be subject to attorney-client privilege. Giuliani has been accused (but not yet charged) with the violation of US foreign lobbying laws by failing to notify authorities that he represented the interests of Ukrainian officials. The former New York mayor denies that he did anything wrong, and has expressed his frustration over the FBI's apparent lack of interest in Hunter Biden's laptop amid claims that the president's son engaged in improper and potentially illegal activity to lobby a Ukrainian gas company's interests with his father Joe Biden during the Obama presidency.

US Judge Orders Appointment of 'Special Master' to Review Evidence Seized From Giuliani's Home
The Biden-Ukraine allegations and Trump's claims about systemic fraud in the 2020 election were central to Democratic lawmakers' impeachment proceedings against him in 2019 and early 2021. In the first impeachment, Trump was accused of using his office to dig up dirt on a potential rival. In the second, he was charged with inciting the 6 January riots at the Capitol. The Senate threw out the impeachment charges on both occasions, frustrating Democrats' efforts to have Trump permanently banned from politics.

No charges have been filed against the Biden family over their alleged illegal activities in Ukraine.