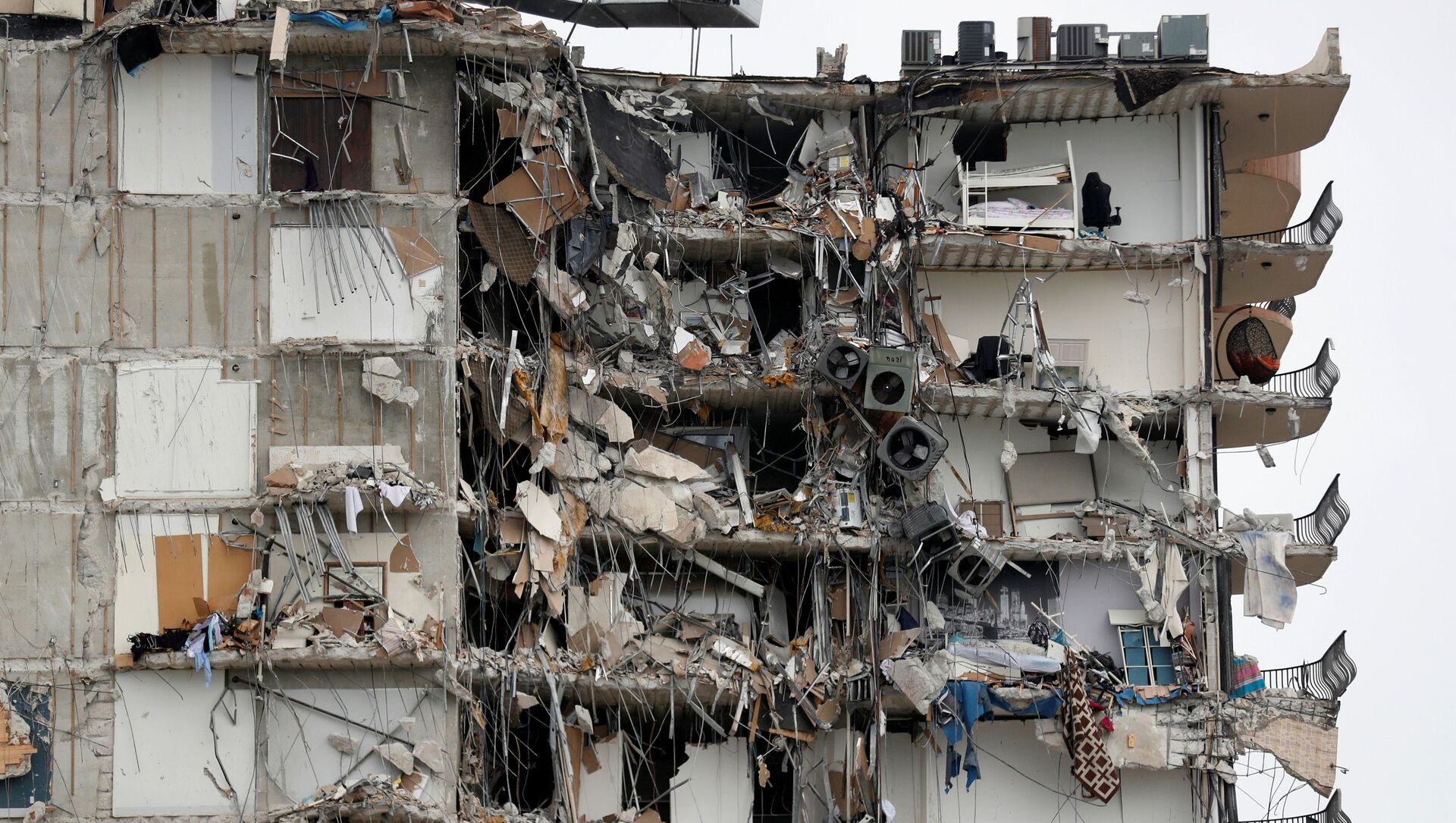 © REUTERS / OCTAVIO JONES
Subscribe
Gaby Arancibia
All materialsWrite to the author
A 12-story residential building collapsed early Thursday in the Floridian town of Surfside, destroying 55 of the apartments and prompting a bevy of first responders to be dispatched to the area. Rescuers have evacuated dozens, however, many remain unaccounted for.

Law enforcement officials in Miami, Florida, revealed in their latest update to reporters that 99 people remain unaccounted for after the Surfside building collapsed in the area.

To date, officials have indicated that the partial building collapse killed at least one individual and injured 11 others, four of whom have been hospitalized. A total of 37 people have been removed from the rubble.

Approximately 102 people have been accounted for, officials stated in a late Thursday conference.

Officials have stressed that an official tally of injuries and fatalities remain unclear as the situation is still "fluid."

Commissioner Sally Heyman underscored to the outlet that individuals who have been designated as "unaccounted for" have been tallied as such "because they have not been heard from or have not called family or friends to say they are okay."

The partial collapse of the Champlain Towers South Condo unfolded shortly after 1:30 a.m., trapping many residents who were likely asleep at the time.

Heyman has also noted that the Miami-Dade Police Department's homicide unit is currently in charge of the investigation into the missing individuals.

Surveillance footage released earlier Thursday captured the exact moment that the collapse occurred, and showed several lights on in some of the units when the building collapsed.

Incidentally, the 40-year-old building's partial collapse took place a day after it had passed an inspection, Surfside Vice Mayor Tina Paul told the Washington Post. At present, investigators are still unsure what prompted the collapse.

US President Joe Biden has stated that he has been in contact with Florida officials, including Miami-Dade Mayor Daniella Cava and US Rep. Debbie Wasserman Schultz (D-FL), telling reporters earlier that he had a "long discussion" with Cava about the development.

Hours after Biden stated federal assistance was available for the Sunshine State, Florida Gov. Ron DeSantis declared a state of emergency, setting the stage for assistance from the Federal Emergency Management Agency.

000000
Popular comments
Just visible start of the decline of the American empire? I thought that American buildings were SUPPOSED to be build better than in Mexico, India, Pakistan and many other 3th world countries. Apparently it ain't so.