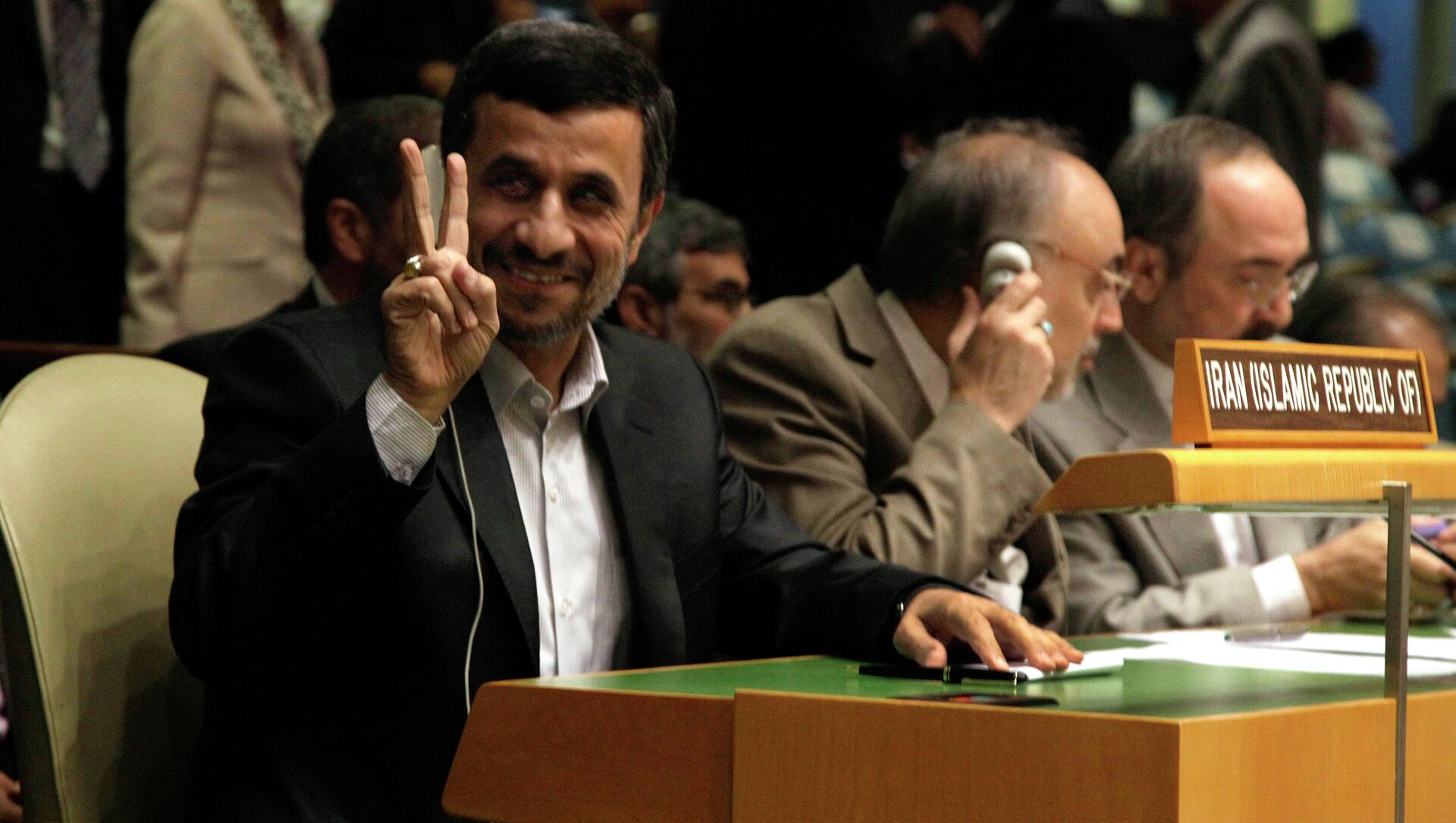 © AP Photo / Richard Drew
Subscribe
International
India
Africa
Ilya Tsukanov
All materialsWrite to the author
The veteran politician, who served as Iran's president between 2005 and 2013, and as Tehran mayor and Ardabil province governor before that, attempted to take part in both the 2017 and 2021 presidential elections, but was barred from doing so by Iran’s powerful Guardian Council.

The world needs to know the truth about the 9/11 terror attacks, and Iran doesn’t need to pursue nuclear weapons because they cannot protect even superpowers from collapse, former President of Iran Mahmoud Ahmadinejad has said.

“Deciphering the events of 11 September, 2001 will be the key to an understanding of all political events and processes in the sphere of global security over the past 70 years, and this will pave the way for us all to a better world,” Ahmadinejad said, speaking to Russian media in a broad ranging interview published on Thursday.

“When the terrorist attack took place, I announced to the United Nations the need to create a consolidated investigative group to establish all the circumstances of the incident and to find the culprit, and said that the Americans themselves were investigating this incident, holding court themselves, deciding everything themselves and fighting wars in other countries on this basis, not allowing anyone to comment on what is happening,” the former president recalled.

“I remember at this time the United States was very angry with me. But all I said was that there was a need for an international investigation, so that the whole world could know who carried out these attacks, and what connections [the attackers] could have to US intelligence and the American security apparatus to be able to break through all defensive barriers and destroy two towers in the very heart of the American nation,” Ahmadinejad added. 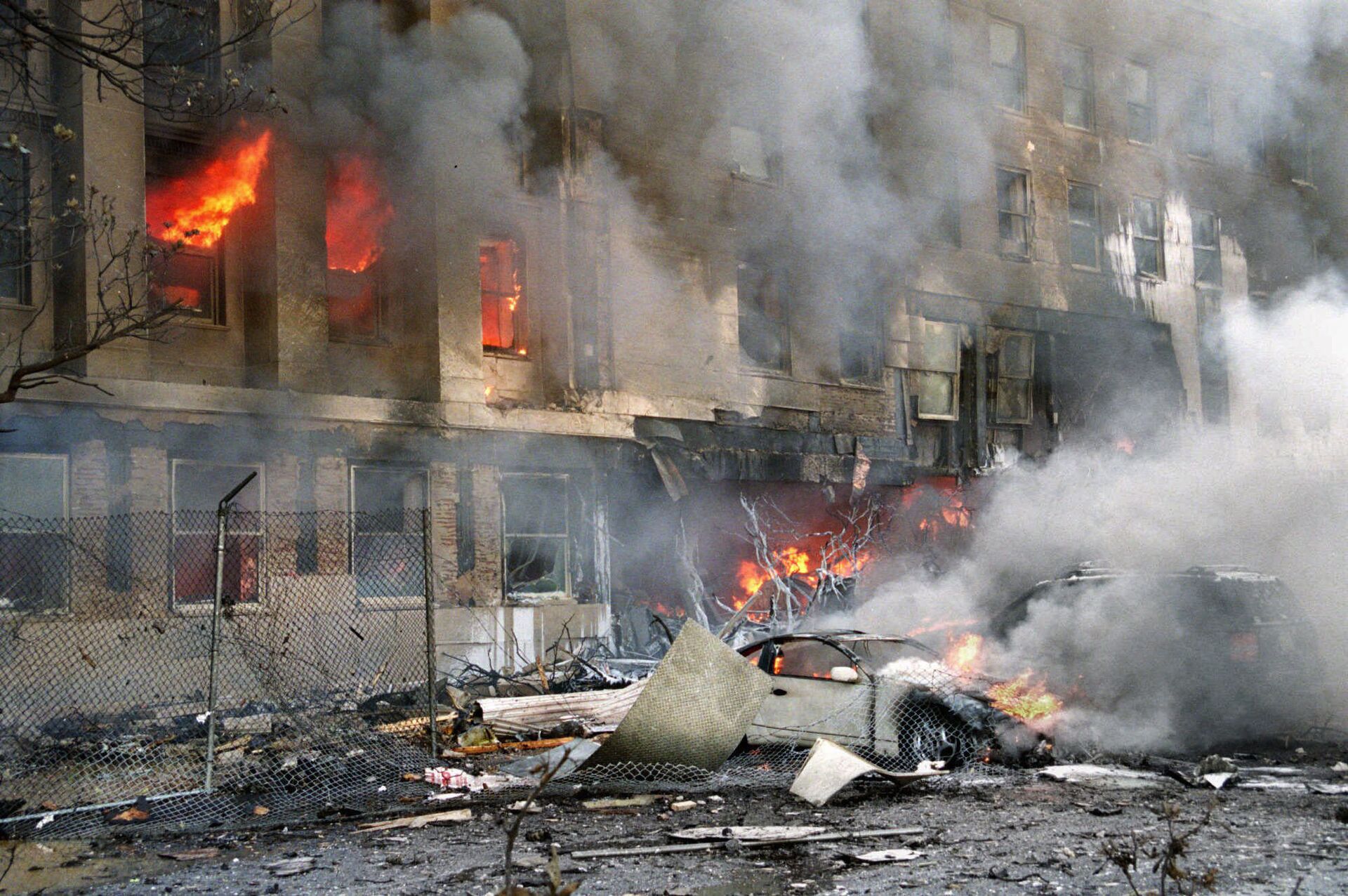 In this 11 September 2001 file photo, damage to the outer ring of the Pentagon is shown after a hijacked airliner crashed into the building
© AP Photo / Will Morris

According to the politician, the US invasions of Afghanistan and Iraq, mounted in the aftermath of 9/11, were an attempt to change the situation in the world and the Middle East in Washington’s favour, and to hide “deep economic and social problems” plaguing the United States. Time has shown that neither war was a success, Ahmadinejad said, with both wars continuing to claim lives and forcing people to flee as their countries, while the states’ infrastructure collapses and their future remains uncertain.

No Need for Nukes

Commenting on Iran’s commitment not to pursue nuclear weapons, and recent attempts by the Biden administration to return to the 2015 Joint Comprehensive Plan of Action agreement, Ahmadinejad said the Democratic president has failed to make any substantive changes to his predecessor’s policies, but that this was because US foreign policy is not controlled by presidents – who are only a small part of the decision-making process.

As for nuclear weapons, Ahmadinejad suggested that “today, nuclear weapons have no practical application, so all the costs of their creation are superfluous. I in principle consider the production and accumulation of weapons an inhuman act and am categorically opposed to it. If world powers reject hegemony and are not looking for disagreements and wars, why start an arms race? Why should the wealth of nations be spent on the production of weapons intended only for murder and not for prosperity?”

“In my first meeting with Mr. Putin at the UN in 2005, I asked him if nuclear weapons could have prevented the collapse of the Soviet Union. These weapons were highly developed, yes, but they did not stop the collapse of the USSR. Because weapons, in principle cannot improve human relations. Today, the capitalist world order led by America is in decline. Can American atomic bombs stop the collapse of US global hegemony? I don’t think there is a single wise person in the world who would say yes,” the Iranian politician added. 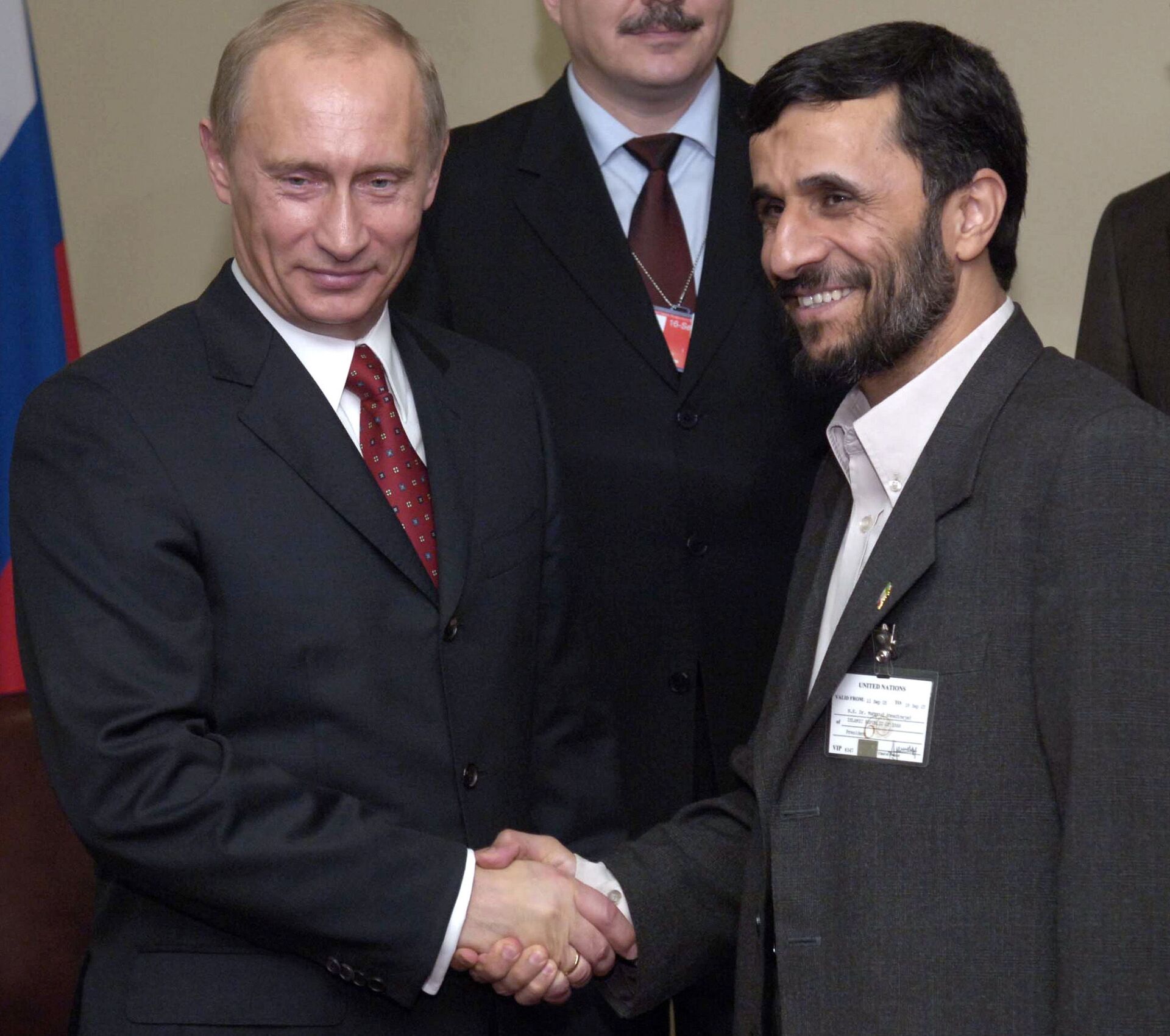 Ahmadinejad expressed certainty that the current world order is unsustainable and is in need of “fundamental changes.”

“Over the past 100 years, it has spawned hundreds of wars, assassinations, arms races, broad class divisions, poverty and social constraints for nations. I believe that we must all join hands and build a new world – a world in which all people will be free and respected –and where justice is central. And I believe that the noble people of Russia can play a very important role in this process,” he stressed. 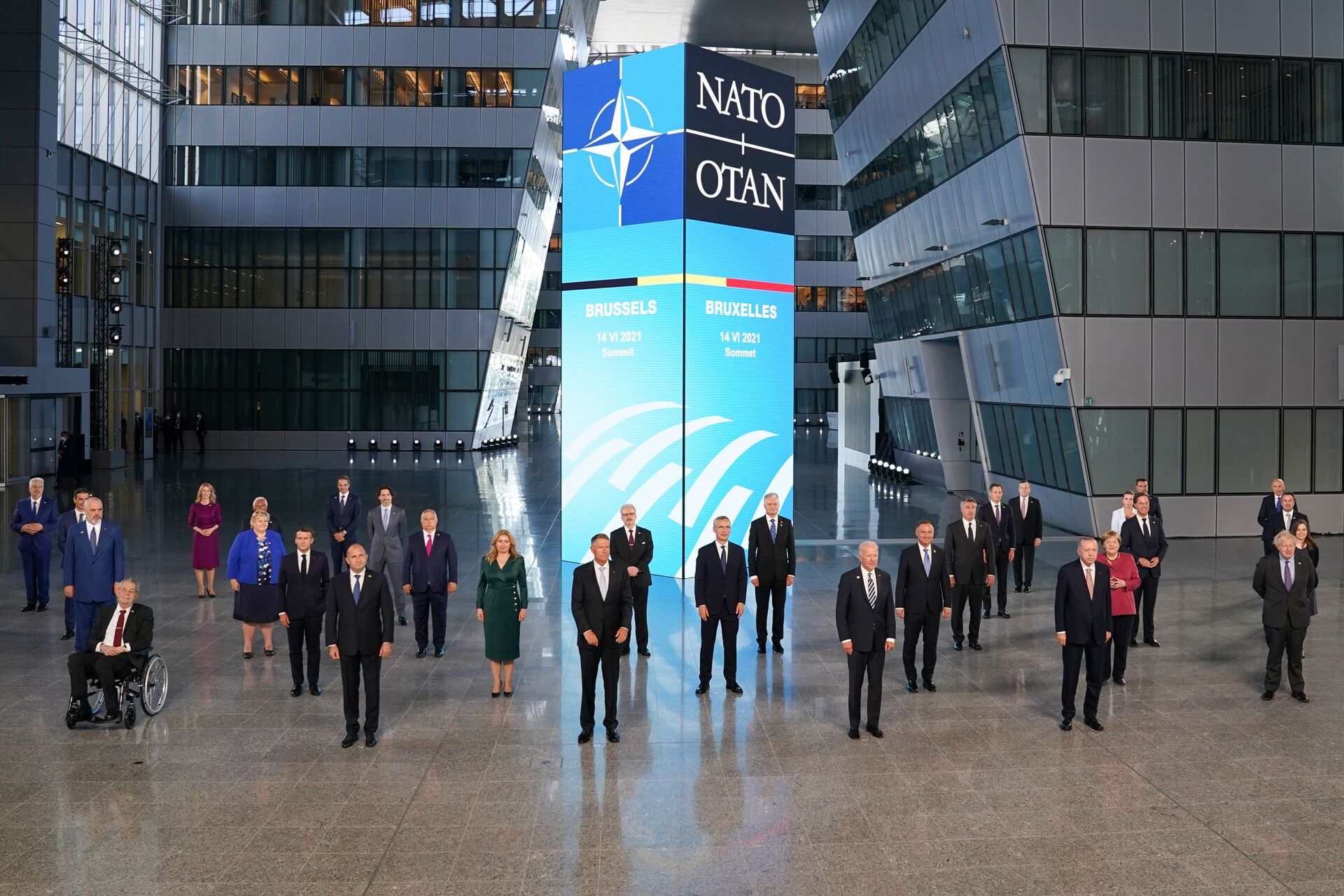 U.S. President Joe Biden and other NATO heads of the states and governments pose for a family photo during the NATO summit at the Alliance's headquarters, in Brussels, Belgium June 14, 2021. REUTERS/Kevin Lamarque/Pool
© REUTERS / KEVIN LAMARQUE

Who is Iran's New President and What Can Be Expected of Him Both Domestically and Globally?
Ahmadinejad was barred from running in Iran’s presidential elections twice in a row, first in 2017 and then in the June 2021 vote, which was handily won by Chief Justice Ebrahim Raisi, a conservative with close ties to the clergy and Supreme Leader Ayatollah Ali Khamenei. Ahmadinejad did not contest the decision to bar him, made by the Guardian Council – Iran’s powerful constitutional watchdog of six high-ranking Shiite clerics appointed by Khamenei and six lawyers chosen by parliament from nominations by the judiciary.

In the West, Ahmadinejad is best remembered for his war of words with the Bush administration over the invasions of Iraq and Afghanistan, as well as his 2006 statement that Israel must “vanish from the page of history,” often misquoted as “wiped off the map,” which sparked outrage in Tel Aviv and conservatives in Washington. Also in 2006, CNN famously misquoted his statement that Iran has a “right to nuclear energy” as Iran’s “right to nuclear weapons,” with that scandal prompting Iran to boot the US cable news network’s journalists out of the country.

In 2007, Ahmadinejad stirred up anger among liberals during a trip to New York when he told students at Columbia University that gays and lesbians “don’t exist” in Iran.

Since completing his term as president in 2013, Ahmadinejad has occasionally popped up in the news cycle, especially while quoting the lyrics of well-known American rap artists, who he apparently vibes to, to make a political point. Last year, the politician’s use of the late Tupac Shakur’s “Pull the trigger kill a N**** he’s a hero” to refer to the death of Minnesota black man George Floyd got him in trouble online.

In his home country, Ahmadinejad is better known for his ascetic lifestyle, populist economic policies, campaigns against corruption, and programmes to improve Iran’s self-sufficiency in a range of areas, including defence. During his time in office, he advocated for a compromise between Western-style capitalism and socialism. Under him, Tehran was also able to form a strategic alliance with Venezuela – with that partnership remaining strong to this day.