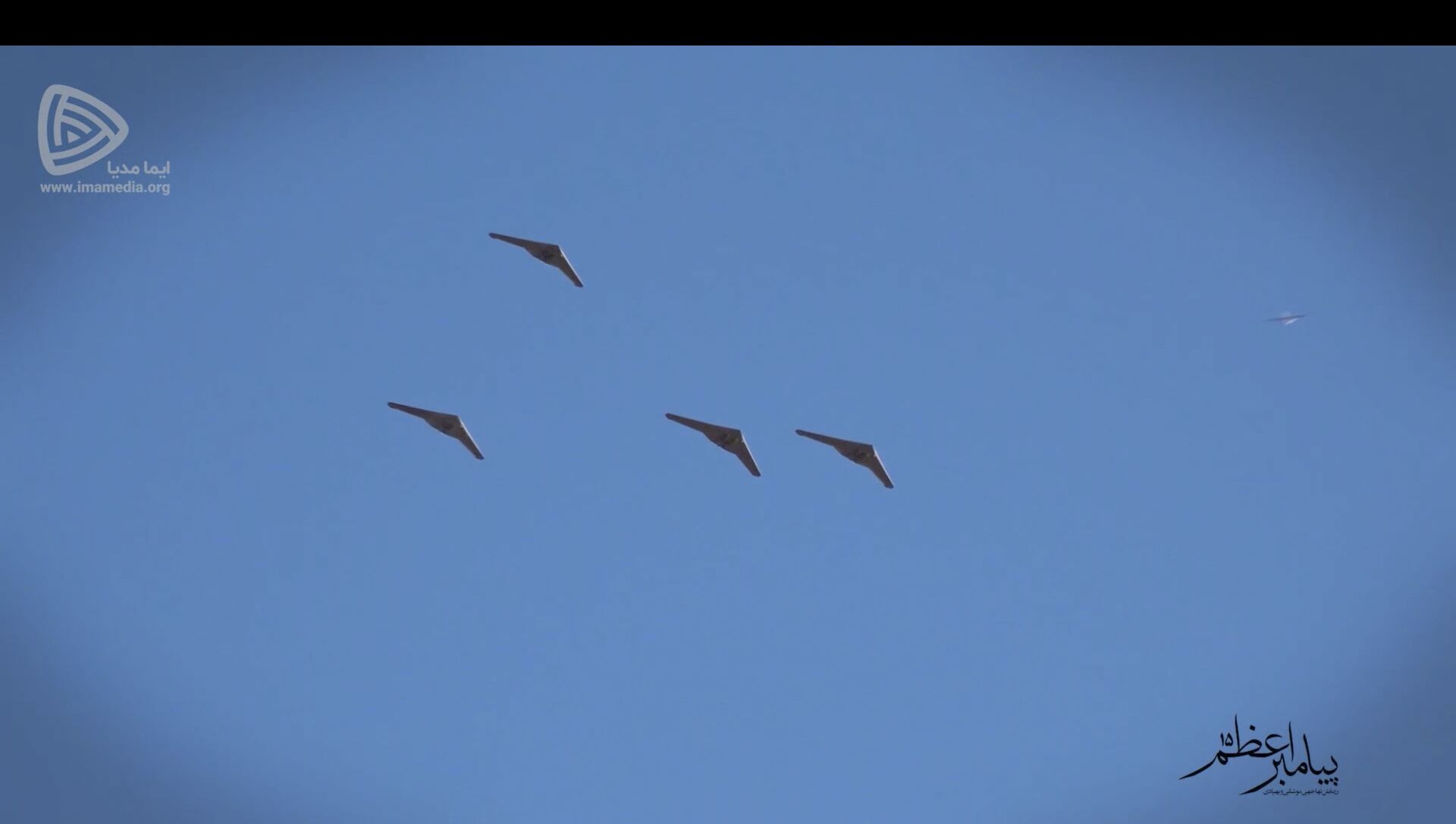 Kirill Kurevlev
Correspondent
All materialsWrite to the author
Israel has been bombing Syria for nearly a decade, allegedly attempting to prevent Iran and affiliated Shia military groups, first of all — Hezbollah, from advancing their attacks against the Jewish state, as well as to hamper the transfer of advanced weapons to militia operating in the region.

The US and Israel have conducted talks on joint counteraction against Iranian drones, as they suspect the Islamic Republic of weaponizing Shia militias in the region, Axios reported on Wednesday.

The meeting reportedly touched upon the establishment of a so-called "no-fly zone" for Iranian UAVs in the Middle East.

According to the report, an interagency working group dealing with the threat of Iranian drones and precision-guided missiles toward Israel and other US allies convened for the first time three weeks ago, building on an April agreement by the two countries' national security advisors Jake Sullivan and Meir Ben Shabbat.

The Israeli delegation reportedly proposed a regional cooperation structure encompassing Arab countries that are threatened by Iranian drones and missiles in a similar way.

The report said the American team was led by White House National Security Council Coordinator for the Middle East and North Africa Brett McGurk, and the Israeli team was led by deputy national security adviser Reuven Ezer, citing both senior US and Israeli officials who participated in the negotiations.

Citing Israeli sources, the outlet noted that the working group will continue to meet because the Biden administration considers the drone threat to US soldiers in the region to be a top priority and is concerned that as the technology spreads, the threat will only become worse.

Al Asad Airbase, which houses the majority of US soldiers in Iraq, has regularly been targeted by drones and missiles strikes, and US officials have frequently blamed Iran-backed militias in the region for the attacks. Media reported previously that a drone strike on May 8 damaged a hangar, and two armed drones were shot down there on June 6.

In May, Israel shot down a drone as it neared Israeli airspace in the northeastern city of Beit She'an, with then-Prime Minister Benjamin Netanyahu subsequently claiming that the drone was launched by Iranian forces either from Syria, or Iraq.

A drone was flown into northern Israel from Syria in a similar occurrence in 2018, before being shot down by an Israeli chopper. In response, the IDF launched a series of strikes in Syria against alleged Iranian assets.

Earlier this week, Israel's former Prime Minister Benjamin Netanyahu criticized new foreign minister Yair Lapid for the alleged "no surprises" agreement with their US counterparts, which reportedly envisaged a commitment to notify each other in advance regarding planned actions against Iran and its nuclear program.

Proxy Wars in the Middle East

Israel seems to be seriously concerned about its own security, given the latest conflict with Gaza-based Hamas and Hezbollah's expanded regional outreach in recent years.

Israeli Military Claims to Have Downed Hezbollah Drone Crossing From Lebanon
Hezbollah has fought scores of skirmishes with the Israeli military, including a significant conflict against Israel back in 2006.

Earlier this month, a top member of the group's central council urged Israel to avoid issuing threats against Lebanon because it will suffer a hitherto inconceivable response if the Jewish State attempts to attack Hezbollah.

That statement came in response to Israeli Defense Minister Benny Gantz warning the militant group against any attempt to carry out attacks on Israel's soil, saying that "if an attack comes from the north, Lebanon will tremble."

Several rockets were launched against Israeli territory from southern Lebanon during the most recent Gaza confrontation, which concluded in a tenuous ceasefire. The IDF retaliated with artillery and airstrikes over the Lebanese border. 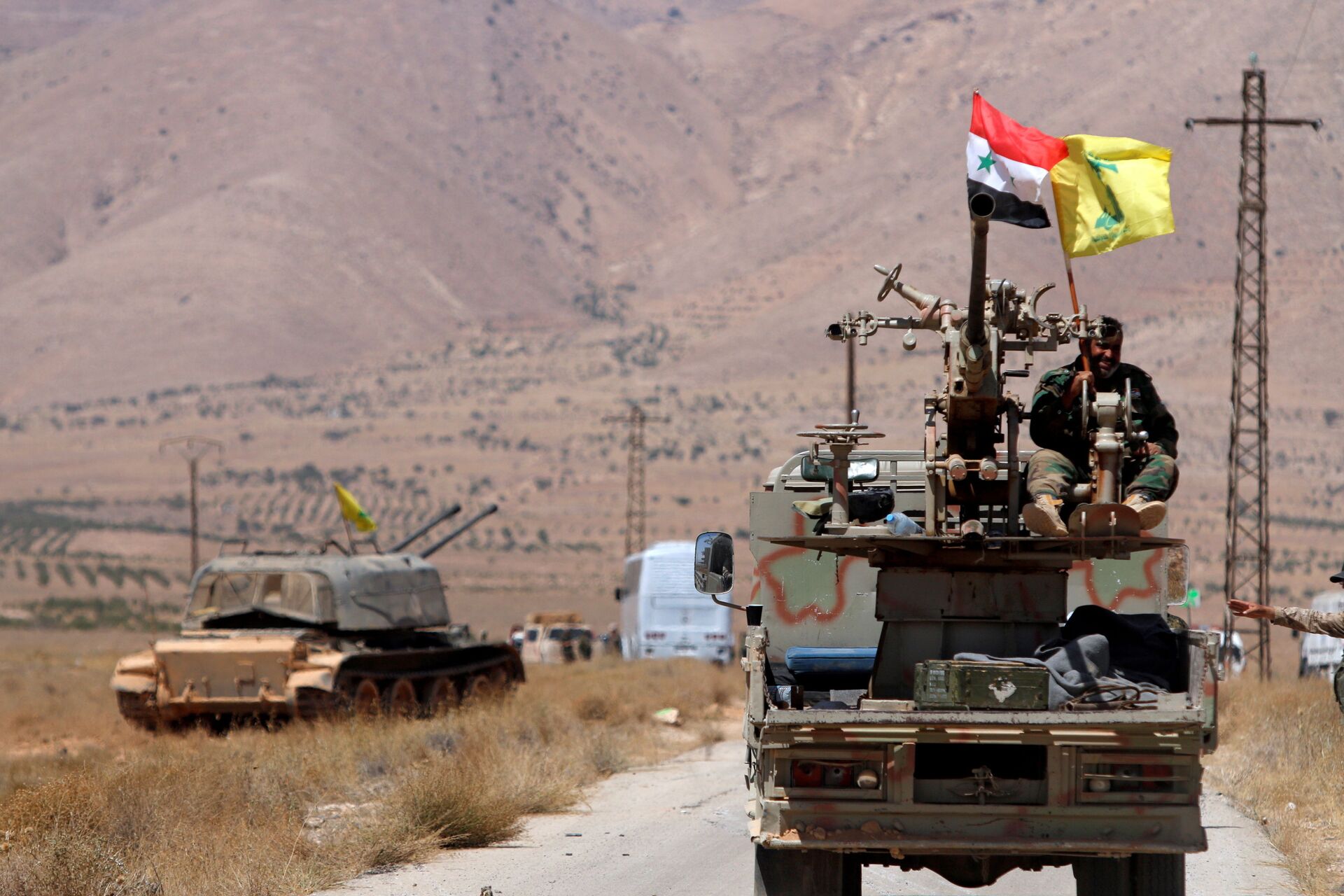 Meanwhile, Syrian territory has suffered multiple airstrikes from the Israeli side, which the IDF claimed were targetting Iran-backed militias and other military targets, allegedly used to counter Israeli actions in the region. While Tel Aviv usually avoids commenting on the airstrikes, IDF Chief of Staff Lt.-Gen. Aviv Kochavi claimed in December that the Israeli army had launched numerous attacks in Syria targeting what he called "Iranian entrenchment" in the Arab Republic.

The Syrian government has repeatedly called on the international community to denounce the Israeli strikes as both violations of international law and Syria's sovereignty, but in vain.

In May, Iran's Major General Mohammad Hossein Baqeri, the Chief of Staff of the nation's Armed Forces, pledged Tehran's readiness to assist Syria in bolstering its defense capabilities, assisting in the reconstruction process, and addressing other issues arising from the fight against terrorists still active in the region.