'We Lived With One Goal': Soviet Veteran on First, Last Days of Great Patriotic War 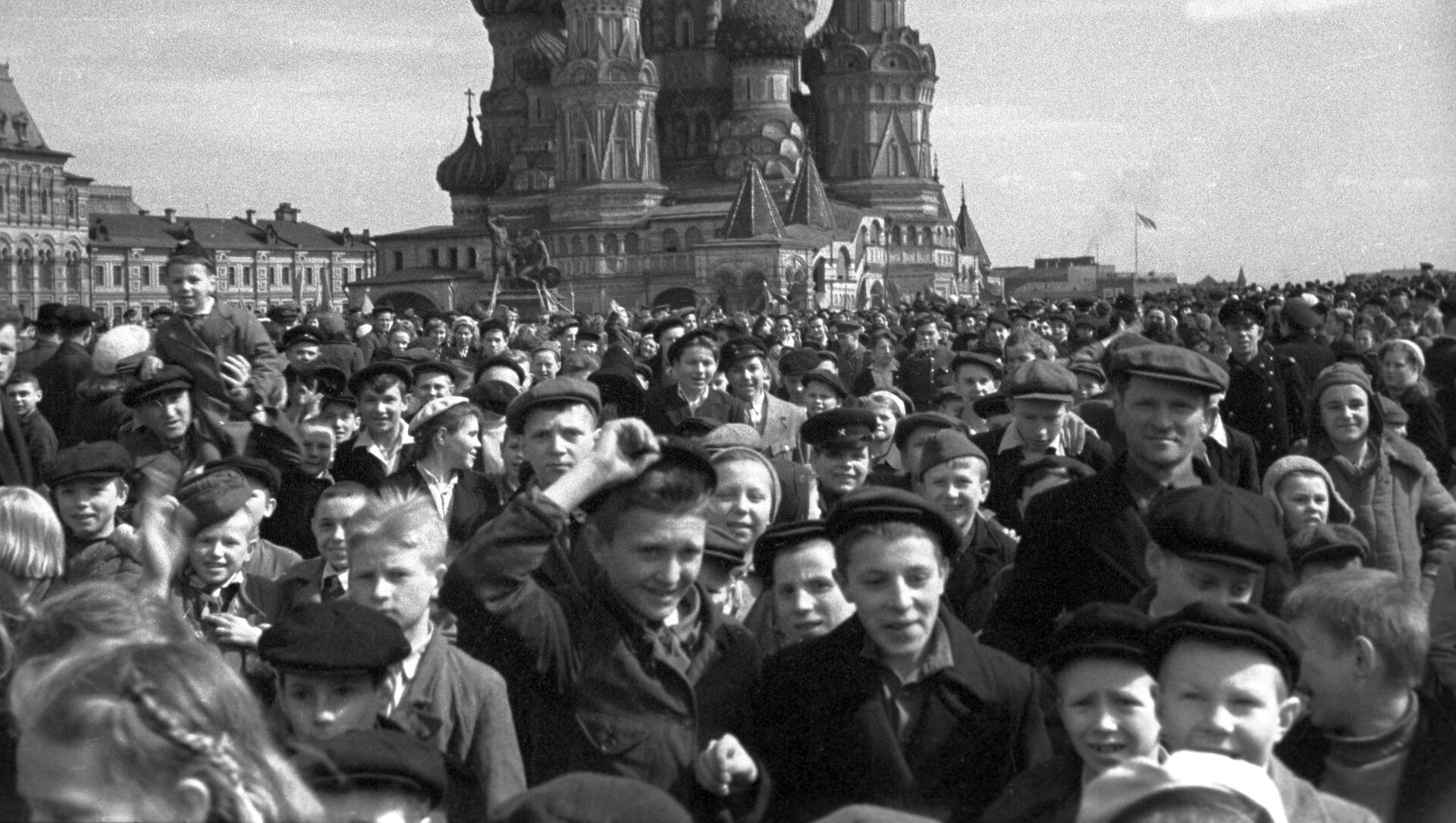 "Of course, the news of the invasion [of the Soviet Union] caused consternation. I have felt that all of us somehow were confused: How are we to live now, what are we to do?" Zaitsev, who now lives in New York, said.

Zaitsev said he was a 16-year-old student in a small township near Barnaul in Siberia when Nazi Germany supported by the Axis forces attacked the Soviet Union on 22 June 1941.

"The director of the school gathered all our teachers and gave instructions as to who had to go to the military commissariat to enlist in the Army. It was the signal to us, students, and we lashed out there", he said. 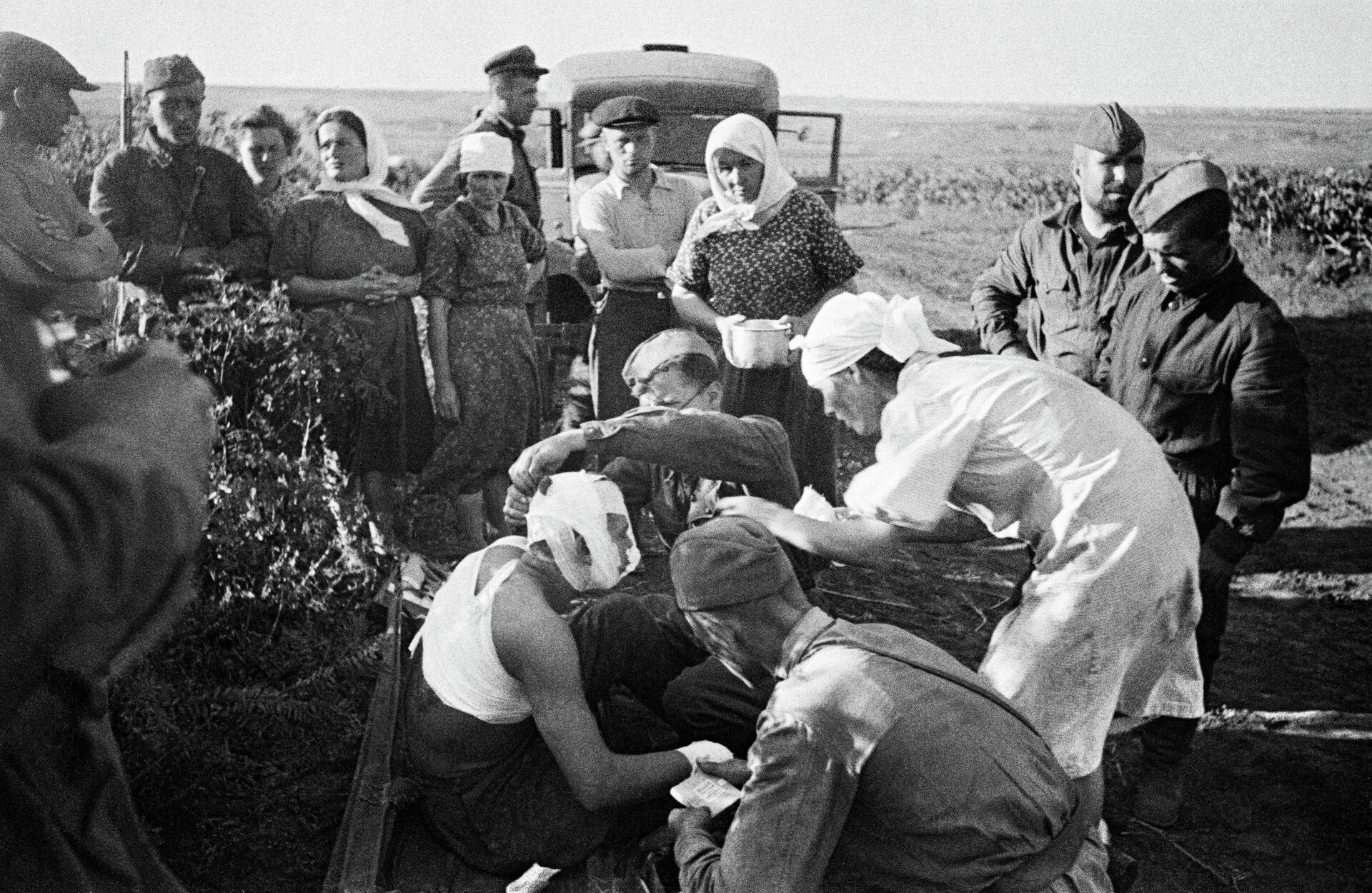 Zaitsev recalled that just one day before the invasion, he and his classmates held their high school graduation party.

"I completed 9th grade and along with our schoolmates from the 10th and 11th grades celebrated cheerily in our school", he said.

The school administration decided to organise a joint picnic in the nearby nice forest the next day and provided a shuttle train for the trip, he noted.

"The next morning, Sunday, 22 June, we gathered together awaiting the train to that wonderful place in the forest. Everybody was ready, but our director was late", Zaitsev said.

The war veteran explained that those gathered realised the school director was instructed to wait for an important telephone call from the local authorities. The school was some 200 meters away from the railroad station and soon everybody saw him running from the door and screaming: "War! War! War!" Zaitsev said. 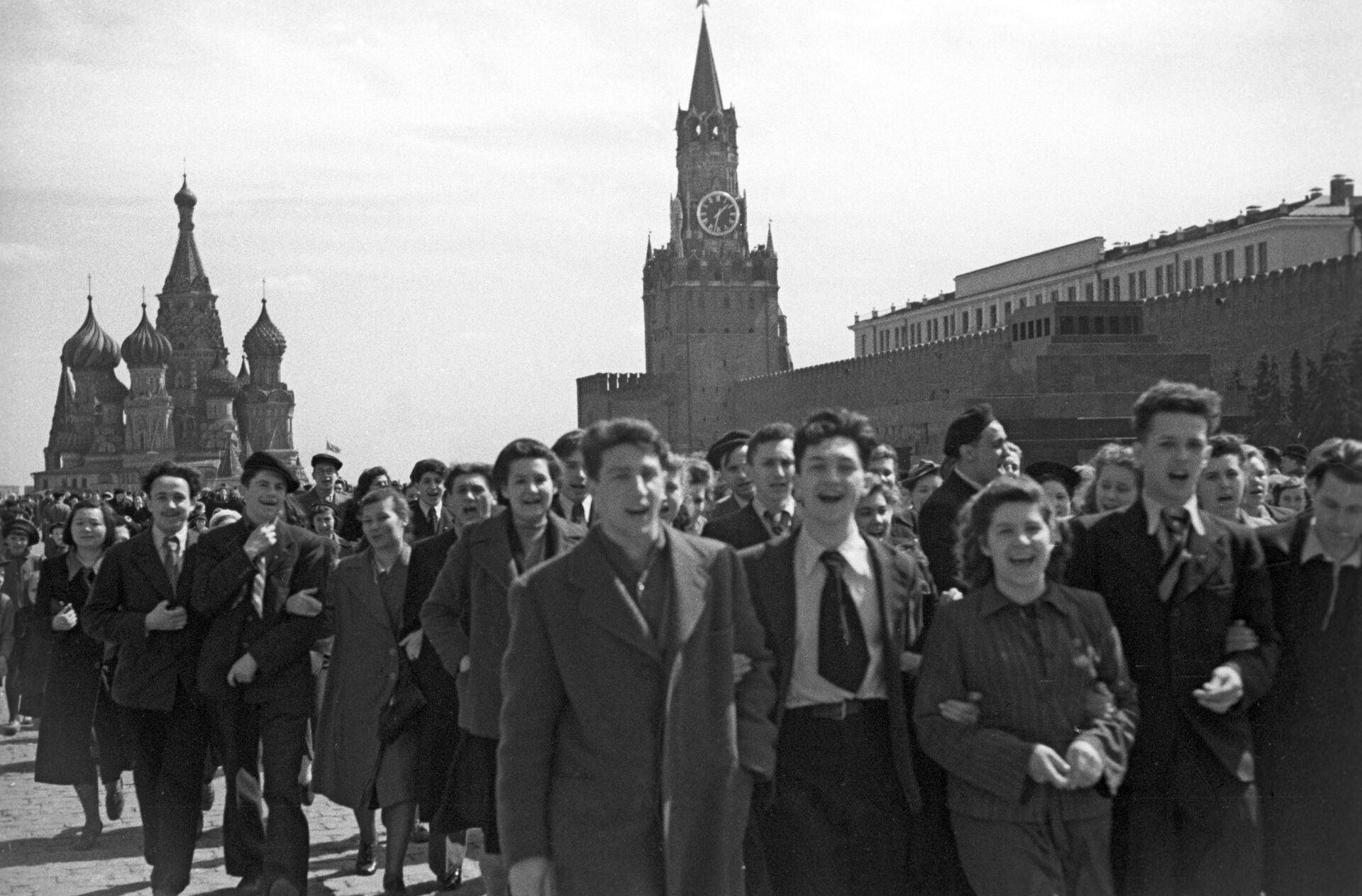 The school director ran to the students and struggling to catch his breath informed them the Hitlerites had treacherously invaded the Soviet Union, are bombing cities and the first battles were taking place near the western border, he noted.

"The director said that we cannot live as usual anymore, a nation-wide mobilisation had been declared and everybody enlisted in the military should be ready for a new life at the front and in the rear," Zaitsev said.

Zaitsev said many of the young men went to the commissariat asking that they be enlisted as volunteer fighters in the so-called skiers battalions.

"We knew about those battalions, which were forming in Siberia. We grew up in the snow and knew how to ski very well", he said.

However, the commissar told the students the Army will defeat the enemy without them enlisting and they should continue their education, he said.

"This answer did not satisfy us, we continued asking, but none of us was able to stay at the commissariat to process documents that day", the veteran said.

Despite the given advice, the students decided education was not their major goal then and began helping local collective farms amid the new circumstances, he noted.

"We felt no panic whatsoever. All of us lived with a common goal. The war urged us to think about how to link our personal destiny to the country’s fate and be helpful to the front", Zaitsev said. 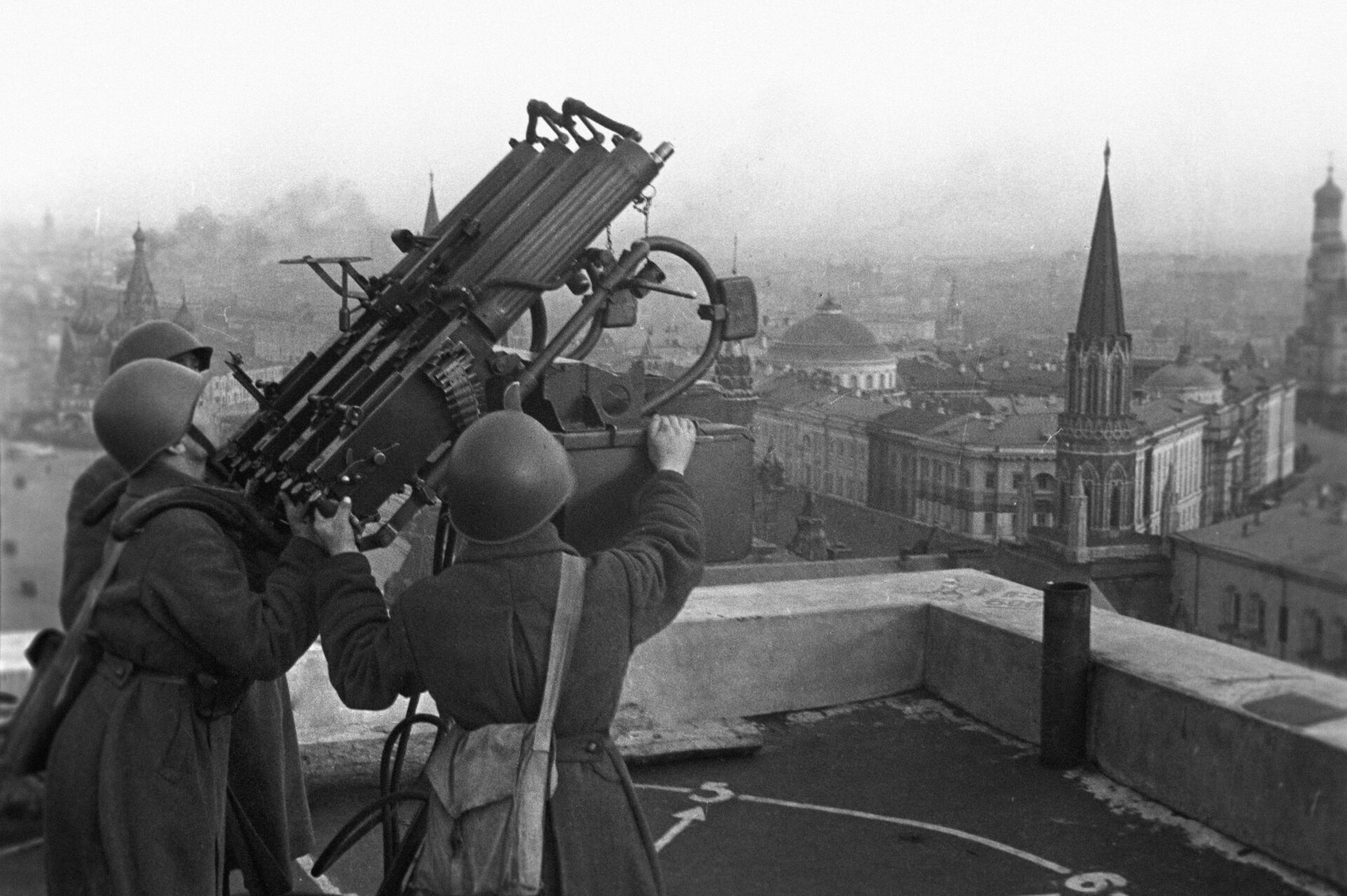 When a wagon building plant was evacuated from Ukraine, he added, the students began working there and helped produce parts for missiles.

"We had to unload these machines from platforms at the railroad station and drag them to the plant", Zaitsev said.

Before the conveyor was built, the students and other young persons dragged and grinded 18-kilogram heavy missile noses under the supervision of a few adult engineers.

"We had to prepare 225 noses, half as much than the adult workers did before the evacuation. Our master came to me once and said: 'You are all great guys. You are doing more than adult men'", Zaitsev said.

Joining the Army, Engaging in Battle

Zaitsev said he "at last" joined the Soviet Army in August 1942 and nine months later engaged in battle as a member of a mortar regiment.

"There was an extremely difficult situation in 1943 and 1942, but in 1945 as well, when we liberated Hungary", he said. "Despite the fierce resistance from the Nazis, we took control over the city of Szombathely near the Austrian border and entered Austria". 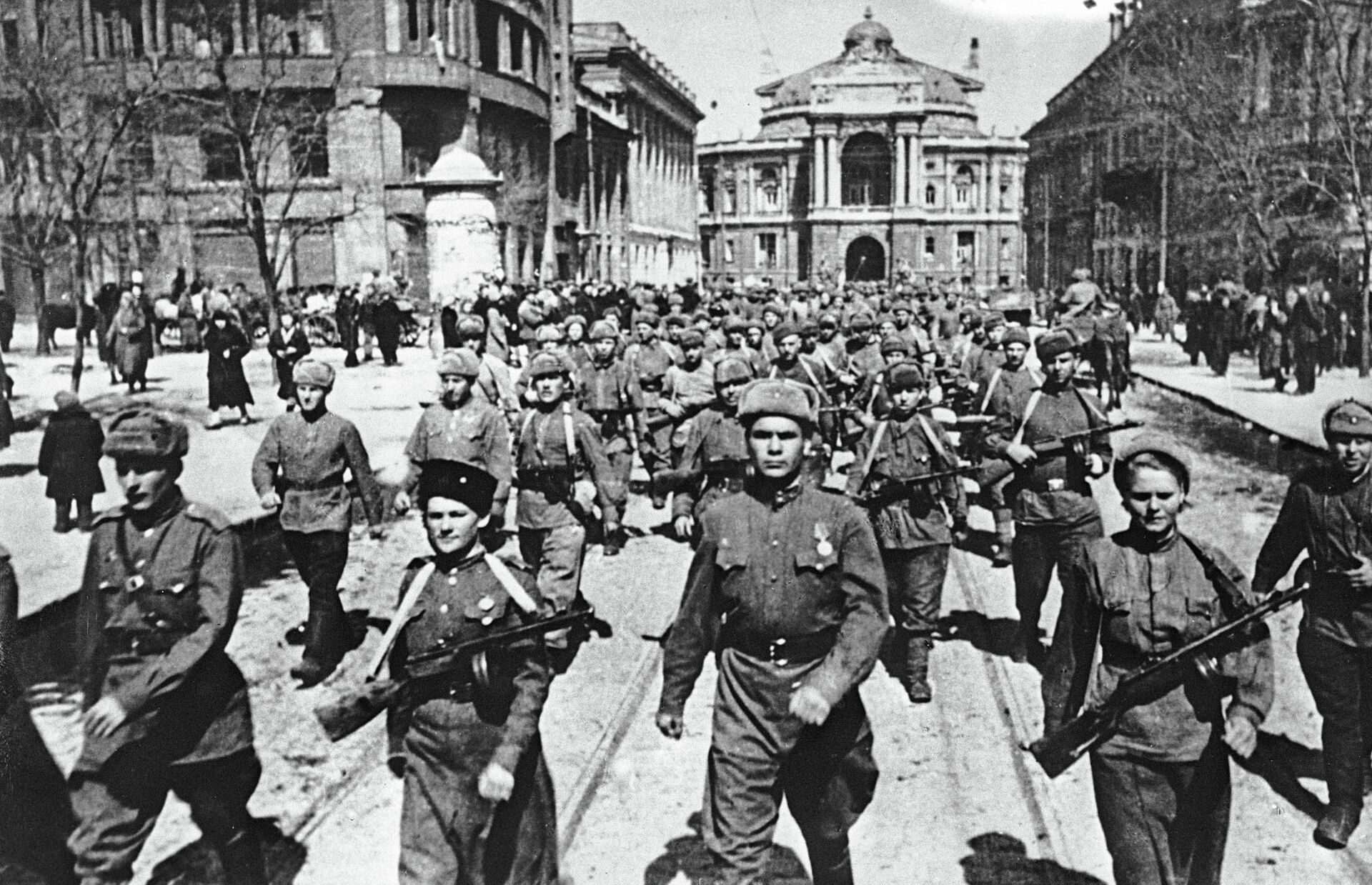 His reconnaissance unit received an order on 5 May 1945 to cross the Danube River and meet with US troops in Czechoslovakia, Zaitsev said.

"On the night of May 9, my radio operator warned me about an important government announcement soon", Zaitsev said. "I took earphones and heard the words that I'd remember forever: 'Germany has capitulated, we won!'"

Zaitsev said he remembers vividly the emotions, the firing in the air and the "Hurray" shouts once word spread of Nazi Germany's surrender.

However, the veteran pointed out that his unit was tasked to continue moving forward.

"On 9 May, 1945, we were fraternising with American soldiers near the city of Pisek not far from Prague", Zaitsev said. 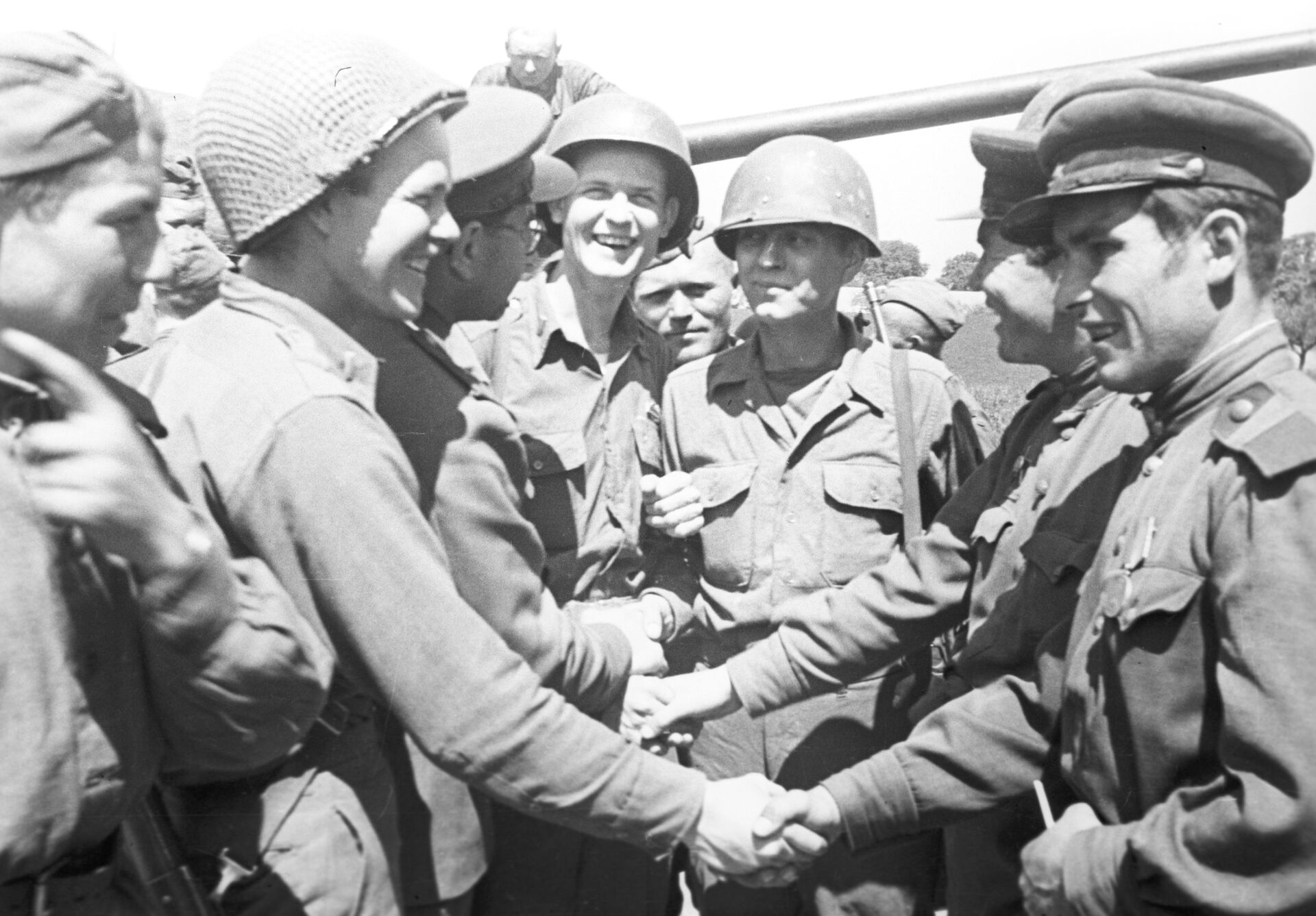 US soldiers congratulating Soviet officers on winning the Great Patriotic War of 1941-1945.
© Sputnik / Olga Lander
/
Go to the photo bank

Local residents greeted the Soviet and US troops and organised a big rally to celebrate the victory, he added.

"A small girl approached me and looked very serious. My right arm was injured, but I took her on my left hand and came to that meeting with this girl and her parents. I finished the war with this girl in my arms", Zaitsev concluded.