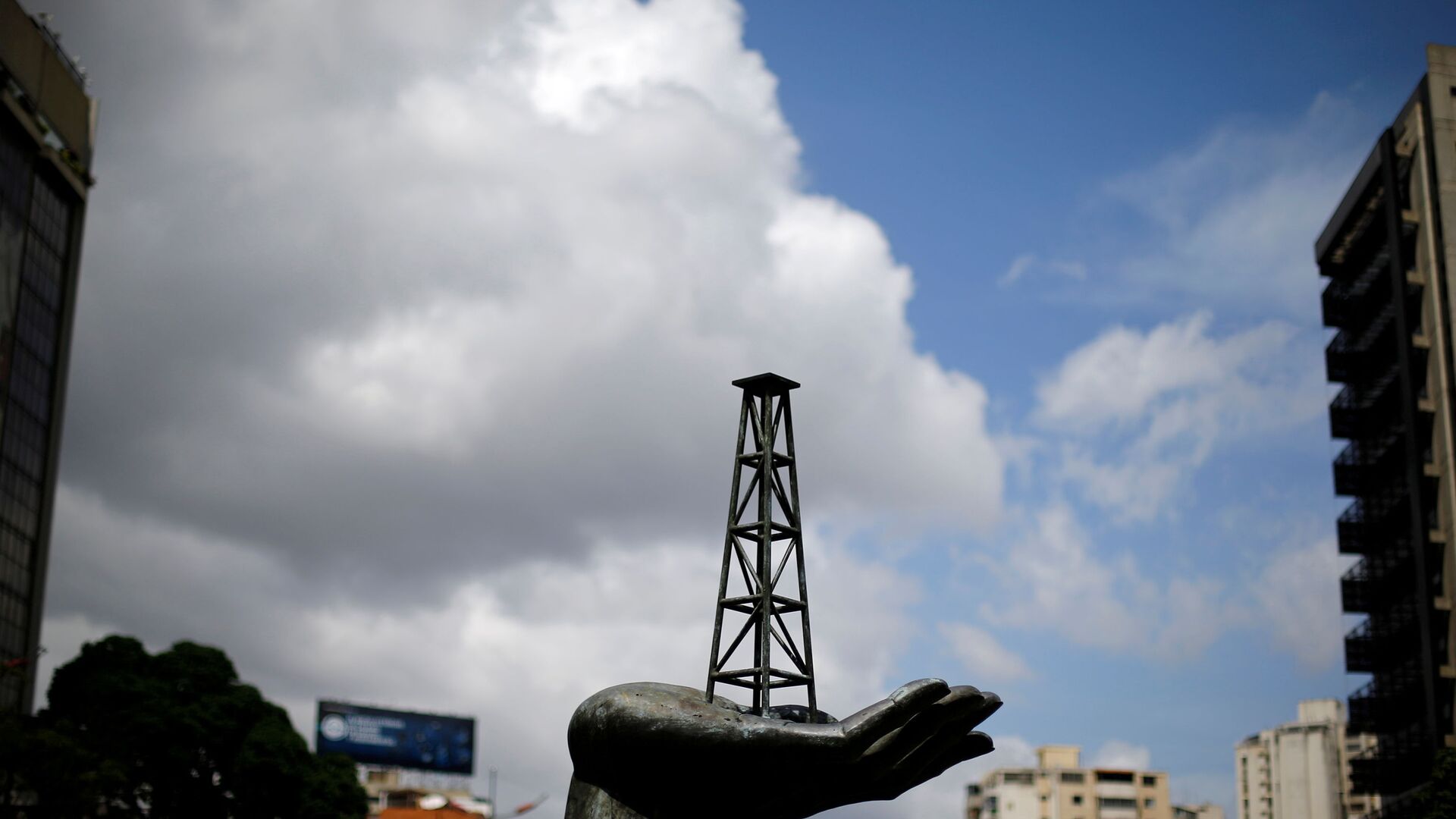 © REUTERS / Ivan Alvarado
Subscribe
International
India
Africa
Morgan Artyukhina
All materialsWrite to the author
The Biden administration has rebuffed pressure from within and without to lower its destructive sanctions against Venezuela’s economy, saying that Venezuelan President Nicolas Maduro must first negotiate with Juan Guaido, a no-name Venezuelan former politician who has been championed by the US and its allies as the legitimate ruler of the country.

On Sunday, a US State Department spokesperson told Bloomberg that US sanctions would only be dropped against Venezuela after extensive reforms to end the “repression and corrupt practices” it claims Maduro’s government is engaged in. They also said Maduro would have to engage with Guaido to end the country’s political crisis, including agreeing to “free and fair elections” and the restoration of economic and political freedoms.

The statement came in response to an interview with Maduro in Caracas that Bloomberg did earlier this week, in which he called on Biden to “give real, objective, believable and verifiable signals of negotiation to restore relations between both countries in pursuit of a win-win scenario. That’s been our goal for a long time.”

Maduro told Bloomberg that since Biden took office on January 20, he has only seen “lukewarm” changes in the US disposition toward Venezuela, hinting at a willingness to negotiate on some issues.

“I’d suggest President Biden put a stop, from the White House, and the State Department, to the demonization of Venezuela, of the Bolivarian Revolution, and of President Nicolas Maduro, and find ways to get closer, to be more respectful and beneficial to each other. That will allow us to restore US-Venezuelan relations,” Maduro added.

His request is not alone: since Biden took office, Democrats have pressured him on changing the US policy toward Venezuela, recognizing the “catastrophic humanitarian consequences” of US sanctions, as a February letter by progressive lawmakers put it.

A February report by the US Government Accountability Office, a federal watchdog agency, faulted US sanctions since 2015 for causing the implosion of Venezuela’s economy, and that same month, the UN special rapporteur on the negative impact of unilateral coercive measures on the enjoyment of human rights called international sanctions on Venezuela “a violation of human rights and of the ‘principle of sovereign equality of states.’”

The latest push comes after Rep. Jim McGovern (D-MA) sent Biden a letter last week asking him to end “all secondary and sectoral sanctions imposed on Venezuela by the Trump Administration.”

I am asking the Biden administration to lift all secondary and sectoral sanctions imposed on #Venezuela by the Trump Administration. pic.twitter.com/6VDMir337L

​These requests have noted not just the death toll, which is well above the 40,000 cited in 2019 by the Center for Economic and Policy Research think tank as having resulted from two years of sanctions, but also the dramatic increase in poverty, widespread shortages of medical equipment and fuel, and the difficulties created in attempting to combat the COVID-19 pandemic.

In April, attempts to use money from a Venezuelan central bank account in the US to buy COVID-19 vaccines from the World Health Organization were blocked by US Foreign Assets Control, which has given control over the $342 million account to Guaido. On Monday, Reuters reported the Venezuelan government had raised about $100 million in funds for buying vaccines by soliciting private banks.

The inspector general for the US Agency for International Development (USAID), which often serves as a front group for the CIA, frankly stated in an April report that the agency’s so-called humanitarian aid program for Venezuela was actually governed by the needs of a regime-change effort, not the humanitarian needs of the Venezuelan people. The group’s efforts included a highly publicized attempt to force entry into the country via the Tienditas Bridge, which crosses the river forming Venezuela’s western border with Colombia, in February 2019.

However, Guaido remains committed to the use of sanctions as a tool for regime change in Venezuela.

Last month, he pitched a  "national salvation agreement" to Maduro aiming to begin seeking “realistic and viable solutions” to the crisis, and has said he would support the gradual lifting of sanctions against Venezuela if Maduro agreed to hold “free and fair” elections.

According to Reuters, a delegation from Guaido’s self-proclaimed ersatz government is presently traveling to European and American capitals to pitch their plan to their allies. The group arrived in Washington, DC, on Monday and will leave on Friday. 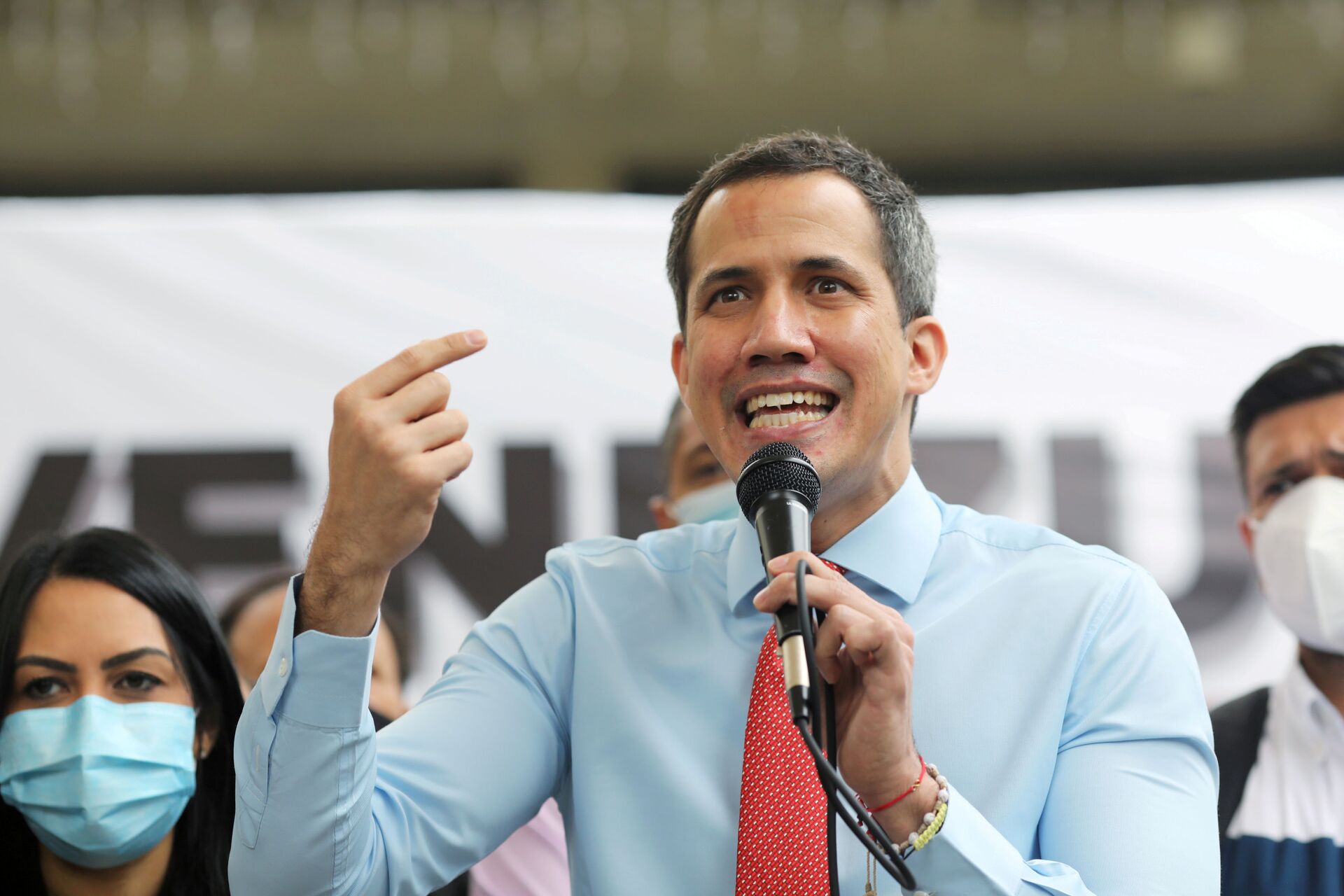 Opposition leader Juan Guaido speaks to the media during a news conference the day after the parliamentary election in Caracas, Venezuela, December 7, 2020.
© REUTERS / Manaure Quintero

Guaido was once the speaker of Venezuela’s National Assembly, which was divested of power in 2017 after it refused to recognize the authority of the Constituent Assembly formed to draft a new constitution. He declared himself the country's interim president in January 2019, claiming Maduro's reelection the previous year had been illegitimate. Guaido was immediately recognized by the US and several Western European nations, but not by most of the world's nations and not by Venezuelans, few of whom had ever heard of the politician. After several attempted coups d'etat, Guaido's marginal movement evaporated and persists on little more than the assets given to it by the US and other supportive nations, such as the UK.

New elections to the National Assembly were held in December 2020, in which Maduro’s United Socialist Party of Venezuela (PSUV) won a majority.

Although many of the opposition parties once allied with Guaido chose to participate in the election, taking 21 of the 277 seats. The other 253 were won by the PSUV and eight other parties allied with them. However, Guaido and a number of opposition parties boycotted the election, claiming it was illegitimate, and several days later held their own mock elections in which they claimed that millions had voted.

Western media uncritically repeated their fantastic claims, and the US and other anti-Maduro nations have used the stunt to continue treating the Venezuelan government as illegitimate.