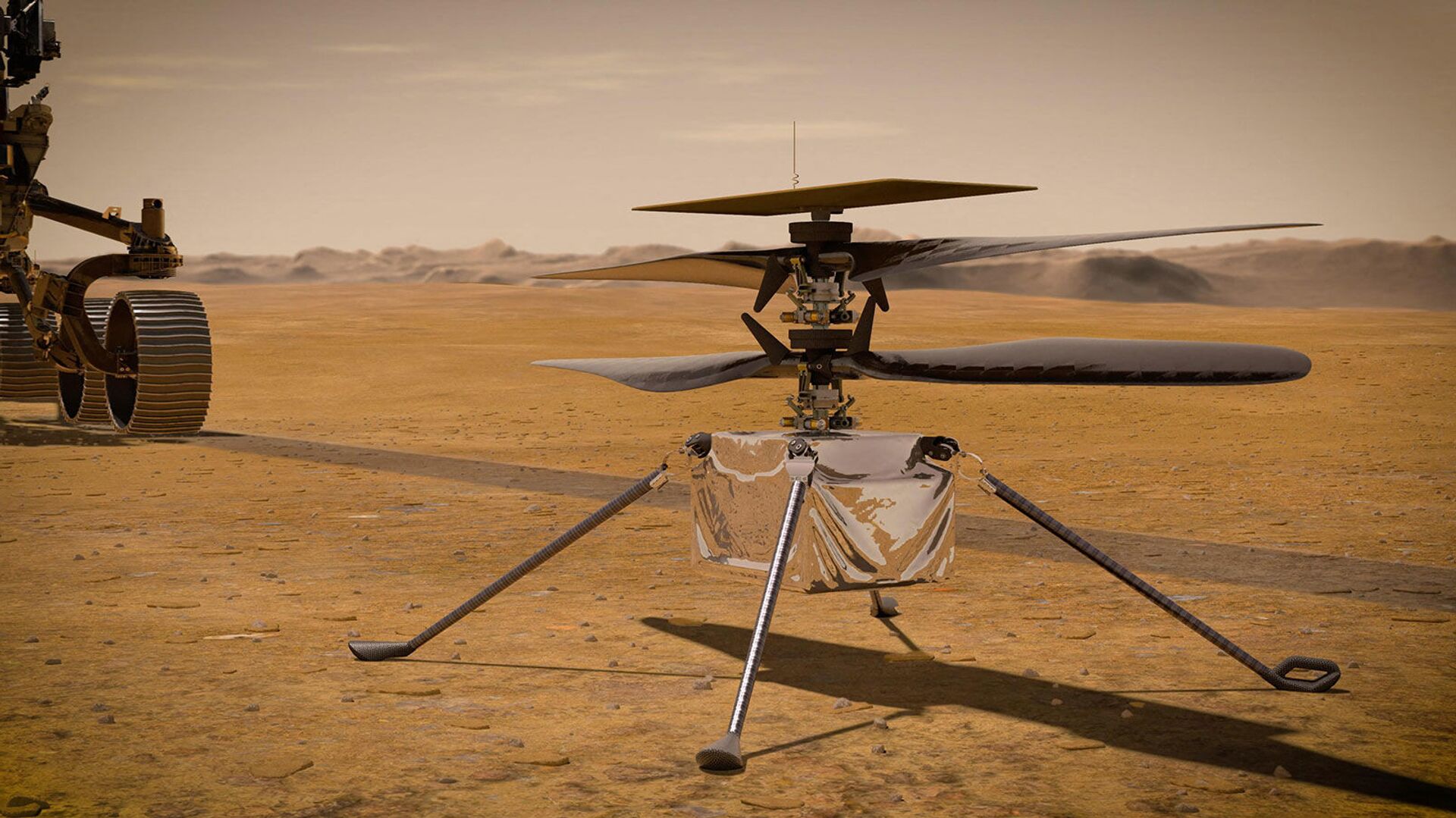 Aleksandra Serebriakova
Moscow-based Sputnik correspondent specializing in foreign affairs.
All materialsWrite to the author
Perseverance rover reached Mars’ Jezero crater in February this year, carrying with it the small Ingenuity helicopter. The mission is set to explore the Red Planet’s rocks and look for ancient traces of life.

Scientists have been intrigued by NASA’s Ingenuity helicopter's surprising ability to envelop enormous clouds of dust during its flights investigating the Martian surface.

The videos, recorded by the Perseverance rover watching its small brother making pioneering flights across the Red Planet, showed how the planet’s dust was whirling just beneath the Ingenuity’s rotors, even when the helicopter was flying just 5 meters from the ground. The phenomenon stunned researchers, who had no idea that dust could be scattered so easily in the thin Martian atmosphere, which has a volume less than 1% of the Earth's.

Ingenuity kicks up dust clouds even at the 5m+ traverse altitude - this is from Flight 4, but what I did was measure differences relative to a reference frame, amplify and overlay them so you can see where the changes in the video occur. pic.twitter.com/djkZK05ARp

​It was the videos from the Ingenuity’s third and fourth flights that caught the scientists’ attention the most. During previous flights the helicopter didn’t travel much from its takeoff points, so the phenomenon couldn’t be properly assessed by the teams. But when they noticed how much dust gets scattered by a robotic machine when its blades stir up patches of air, they were schocked.

“Anything we can learn from it scientifically is icing on the cake," Brian Jackson, a physicist at Boise State University who specifically studies the Red Planet’s dust, told Nature.

The researcher admits that the teams are still pretty puzzled by the sighting, especially the helicopter’s fourth flight from 30 April that showed the tiny robot generating a huge dust cloud along its 133-meter flight that left its blades spinning at more than 2,400 revolutions per minute.

Witness the historic moment in full. The Mastcam-Z cameras on @NASAPersevere show us the takeoff, hovering and landing of the #MarsHelicopter. pic.twitter.com/ypdIWmC4D1

Lemmon was now planning to compare traces left by the helicopter on the Martian surface with those that occur after natural, tornado-like ‘dust devils’ that blow across the planet when formed by the air heated by the Sun. This phenomenon is also something scientists have long been struggling to fully understand.

"We have to know how that first step in the process works," Lemmon explained.

Ingenuity helicopter is a part of NASA’s Mars 2020 mission, tasked with investigating the Red Planet’s geological processes and whether it was once habitable in the past. It is also expected to soon pick up a sample of the planet’s geological material to eventually fly them over to Earth with some future spacecraft, despite strong opposition from some members of the scientific community who see this first-ever Mars sample return as something threatening to life on Earth.