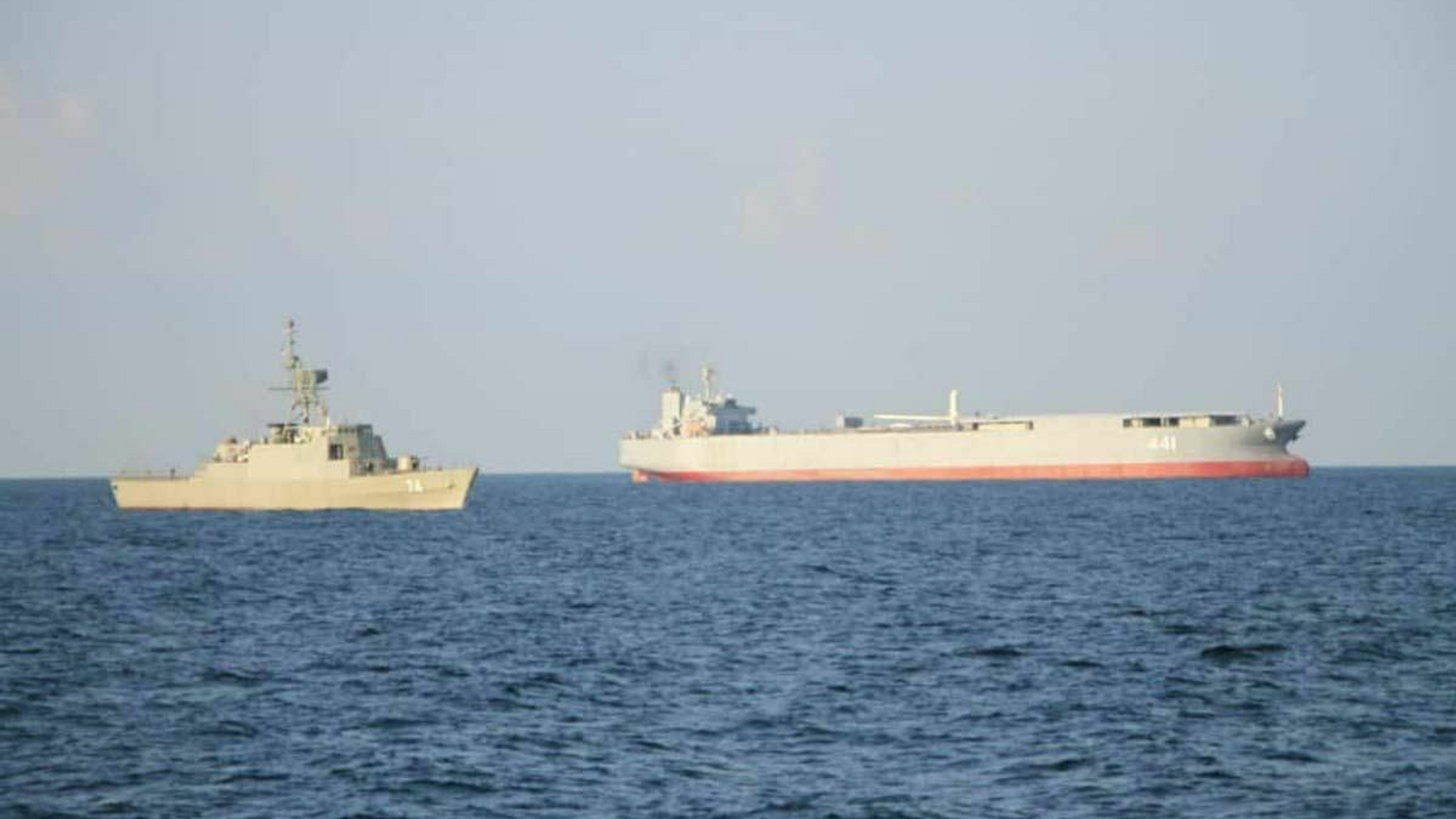 Ilya Tsukanov
All materialsWrite to the author
US intelligence spotted an Iranian frigate and fuel ship heading for Venezuela last month. Iran confirmed the ships’ deployment, warning the US against any “miscalculations” and stressing that the ships are operating in international waters. This week, the commander of Iran’s Navy said the deployment was “greatly worrying” for Tehran's enemies.

The two-ship Iranian flotilla which set off in the direction of Venezuela last month and created a headache among officials in Washington seeking desperately to break up close Iranian-Venezuelan economic and military cooperation appears to have changed course, Politico reports, citing US officials.

The officials, who previously alleged that the ships may be carrying weapons to the Latin American nation, are now said to be sailing through the Atlantic up the west coast of Africa. One defence official suggested they may be heading for Syria or even Russia.

The ships include the Sahand, a Moudge-class frigate, and the 755-foot long Makran port ship and fuel carrier which US intelligence says may be carrying both fuel and weapons –including fast-attack boats and other arms. Iranian media have previously confirmed that the Makran is armed with electronic warfare and missile capabilities to ensure its defence.

The flotilla has already changed course several times along its way, zigzagging along in a possible bid to evade or confuse the Pentagon and US intelligence officials.

The Iranian navy's Sahand destroyer along with Makran forward base ship have entered the Atlantic Ocean for the first time without berthing at any port in the route pic.twitter.com/nCAMVZ0IlV

Politico’s source said officials in Washington believe the change in course indicates that recent US diplomatic pressure to force governments in the Western Hemisphere, including Venezuela and Cuba, to turn the ships away, have proven successful. However, authorities in Caracas, Havana, and Washington itself have yet to comment on the matter.

State Department spokesman Ned Price declined to comment on the ships’ destination in a press briefing Thursday, but confirmed that the White House was “monitoring developments,” and warned that the US is “prepared to leverage applicable authorities, including sanctions, against any actor that enables Iran’s ongoing provision of weapons to violent partners and proxies around the world.”

Price did not clarify what about Venezuela’s behaviour earned it the designation of a “violent partner” of Iran. Caracas has not been involved in any wars since World War II, when it joined the United States and other Allied powers in the fight against the Axis. Regarding sanctions, Washington has already slapped both countries with some of the toughest restrictions imaginable, and it remains unclear what else can be done in this area.

Iranian Navy Commander Says Tehran’s Growing Oceangoing Capabilities ‘Greatly Worry’ Enemies
The flotilla set sail from Iranian waters west toward Venezuela’s direction in May, successfully rounding the Cape of Good Hope in a historic first for a country that traditionally limits its naval operations to its coasts and the occasional deployment in the Red Sea, the Mediterranean or the Indian Ocean.

On Monday, Iranian Navy commander Commodore Hossein Khanzadi boasted that Iran’s first-ever arrival in the Atlantic “has greatly worried the enemies of the countries,” and stressed that the Islamic Republic’s deployment is strictly “aimed at promoting cooperation with the littoral countries in the Atlantic.”

Refueling of the 🇮🇷 #Iranian light frigate Sahand from the floating base Makran during the ocean passage. pic.twitter.com/u4yqgmsubG

Earlier, Iranian Foreign Ministry spokesman Saeed Khatibzadeh emphasized that “no country” has the authority to violate Iran’s right to operations in international waters and on the basis of international law, and warned anyone who would seek to stop Iran’s ships’ free passage against making “a miscalculation.”

Last week, the American journal Foreign Policy indicated that under existing international laws recognised by the US, Washington would only have a right to act against the Iranian vessels if they posed some kind of ‘immediate danger’. Theoretically, FP said, the ships could even sail into American waters if their intentions were innocent, although in that case US authorities could order them to leave.

Iran and Venezuela have spent decades working to establish a strategic partnership, not letting the vast distance between the nations and their radically different governing ideologies stand in the way of their cooperation. Over the past two years, despite being under crushing US sanctions itself, Tehran has helped Caracas overcome US restrictions against the Latin American nation by providing it gasoline, spare parts for refineries, and food deliveries. 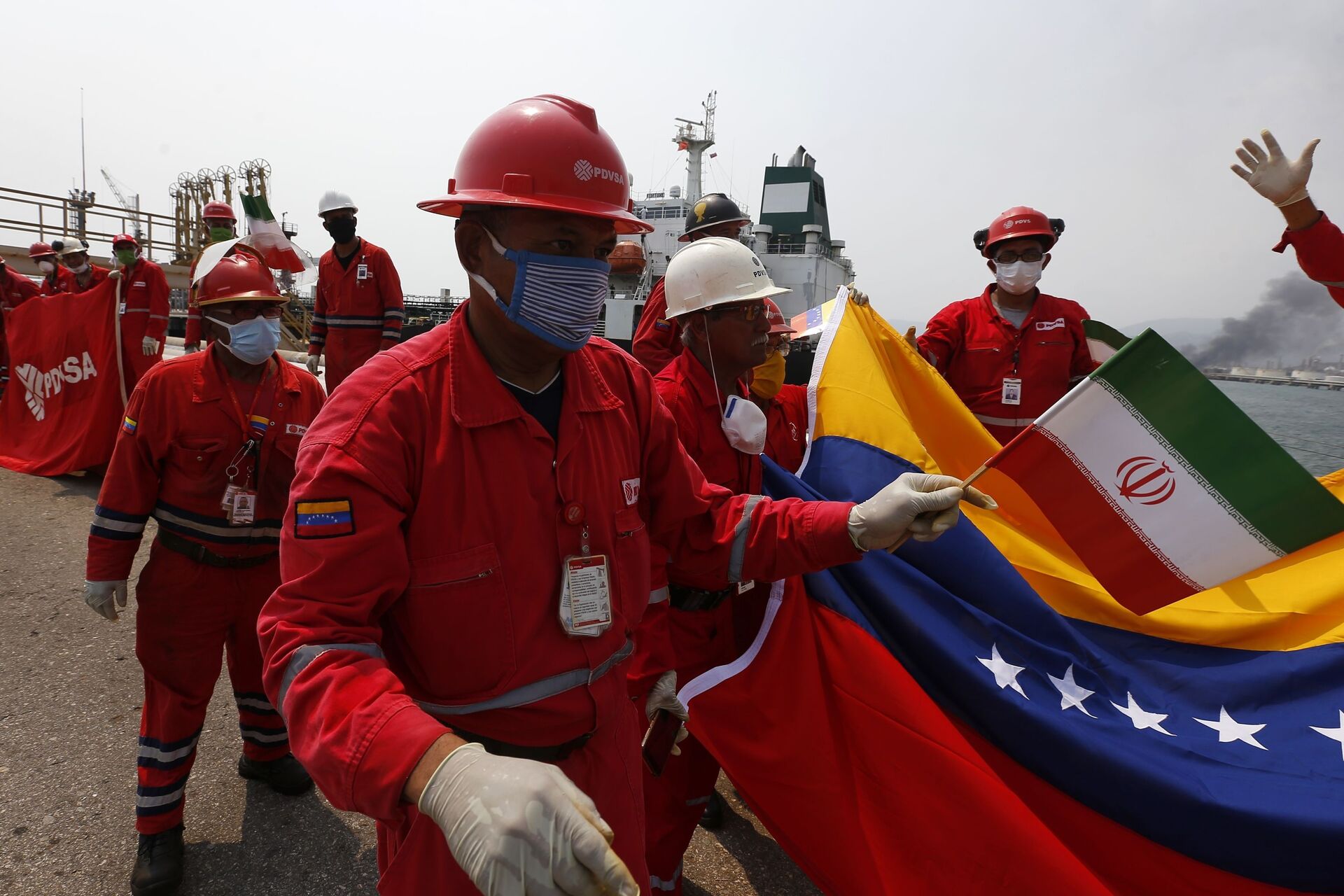 A Venezuelan oil worker holding a small Iranian flag attends a ceremony for the arrival of Iranian oil tanker Fortune at the El Palito refinery near Puerto Cabello, Venezuela, Monday, May 25, 2020
© AP Photo / Ernesto Vargas
Newsfeed
0
Access to the chat has been blocked for violating the rules . You will be able to participate again through:∞. If you do not agree with the blocking, please use the feedback form
The discussion is closed. You can participate in the discussion within 24 hours after the publication of the article.
To participate in the discussion
log in or register
loader
Chats
Заголовок открываемого материала