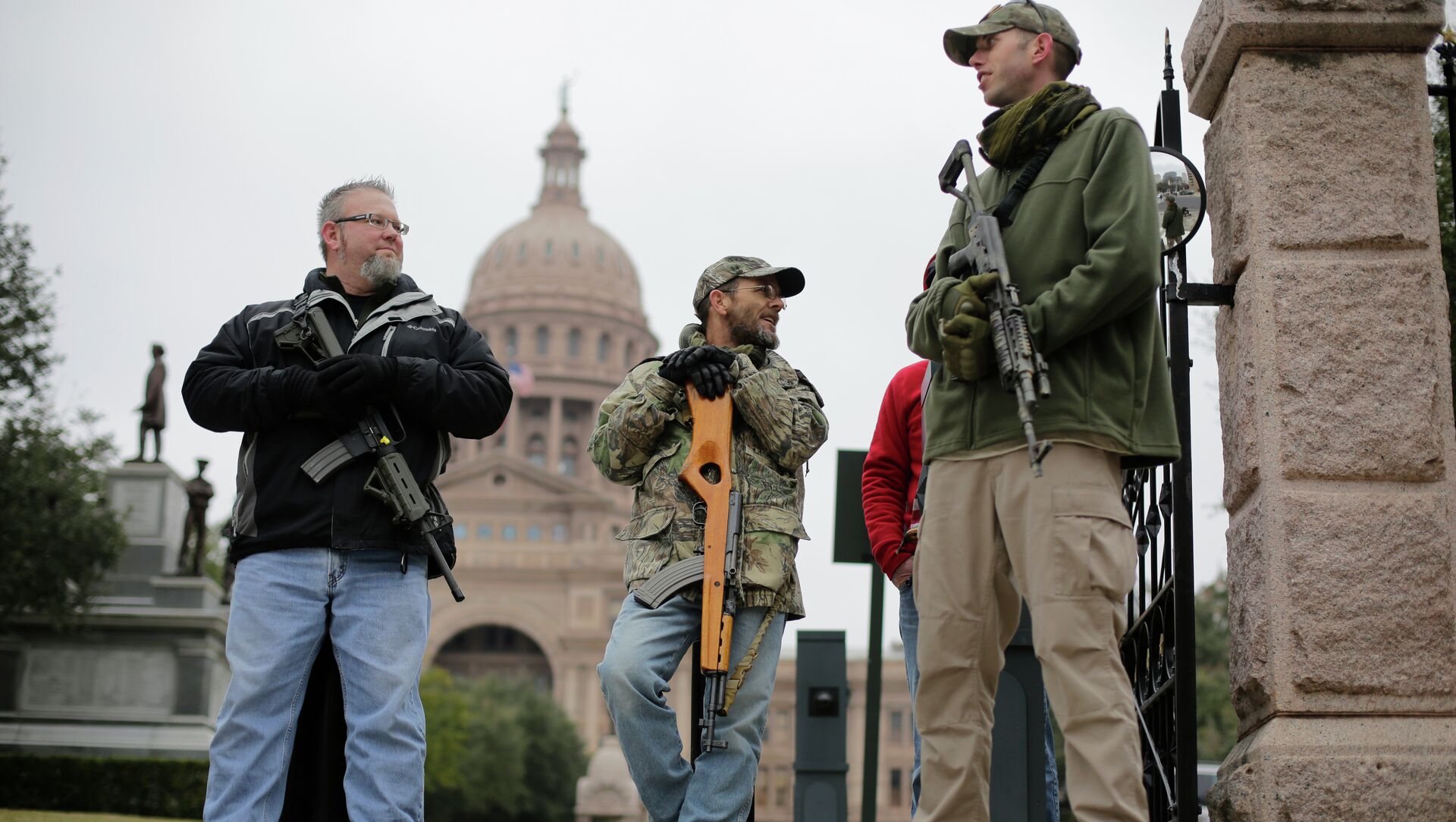 © AP Photo / Eric Gay, File
Subscribe
Svetlana Ekimenko
All materialsWrite to the author
The Republican-dominated legislature of Texas voted on 24 May to approve the bill that would allow people to carry handguns without a license or a certification that they are qualified to own and use a weapon, with the bill sent to Governor Greg Abbott, who vowed to sign it as an affirmation of 2nd Amendment rights.

Texas Governor Greg Abbott has signed into law a bill that scraps most of the state’s permit requirements to carry a handgun, in defiance of vocal opposition from both police groups and the public, reported The Texas Tribune.

The state, which has more than 1.6 million handgun license holders, will join a handful of other conservative-led states, such as Iowa, Tennessee, Montana, Utah and Wyoming, that have passed measures this year allowing some form of expanded gun rights.

The bill, also dubbed “constitutional carry”, cleared the state Senate late last month, with Abbott at the time vowing to put his name to HB 1927 as a “restoration of Texans’ constitutional right under the Second Amendment”.

Set to take effect on 1 September, the law allows individuals aged 21 and older who can legally possess firearms in the state to carry handguns in public places openly or concealed without permits.

The bill does not apply to those already prohibited from carrying firearms under state or federal law, such as convicted felons. Under current Texas law, residents require licenses to carry open or concealed handguns, and must submit a fingerprint, undergo a background check, complete a training course and pass a shooting proficiency test as part of the process.

The legislation that cleared the Texas House and Senate had faced strong objections from the public and gun control advocates. As it passed the House earlier in the year, critics lambasted it amid increased gun violence nationwide and Texas’ recent history of mass shootings, including those at an El Paso Walmart, a church in Sutherland Springs, and a high school outside Houston.

US President Joe Biden and congressional Democrats have been urging federal action regarding gun laws, with the POTUS saying on 8 April:

“Gun violence in this country is an epidemic, and it’s an international embarrassment. The idea that we have so many people dying every single day from gun violence in America is a blemish on our character as [a] nation.”

Gun control groups slammed the Texas legislation as potentially endangering the public and law enforcement.
According to the University of Texas/Texas Tribune poll in May, some 59% of Texans surveyed were opposed to permitless carry.

A group of five police organisations, led by the Dallas Police Association, lobbied against it, but eventually compromised after Senators included a number of amendments to the law. The changes pertained to officer safety. The compromise bill retained a provision allowing police to question residents solely based on their possession of a handgun.

We respect our 2A rights but we also respect our officers safety! If you back the Blue you will listen to law enforcement and keep the agreed upon amendments. @wfaa @NBCDFW @CBS11 @FOX4 @KXAN_News @cbsaustin @fox7austin @KVUE pic.twitter.com/gIFKDpwshV

​Supporters of the bill say ditching impediments to the constitutional right to bear arms will only help Texans better defend themselves. Pro-gun groups have hailed the new legislation. The National Rifle Association pronounced it to be“the most significant pro-Second Amendment measure in Texas history.”

Texas, which was found to rank tenth most gun-friendly US state by 1Point21Interaction study, has allowed people to carry handguns since 1995.

State lawmakers earlier passed a bill to make the state into a “Second Amendment sanctuary” by effectively exempting it from any new federal gun legislation, with Governor Abbott “looking forward to signing it”.

This is what I’m seeking for Texas—a law to defy any new federal gun control laws.

It will make Texas a Second Amendment Sanctuary State.

Legislation is moving in the Texas House and Senate.

000000
Popular comments
When threatened with deadly force remember, aim straight shoot straight when safe to do so. Only You can prevent gun violence.