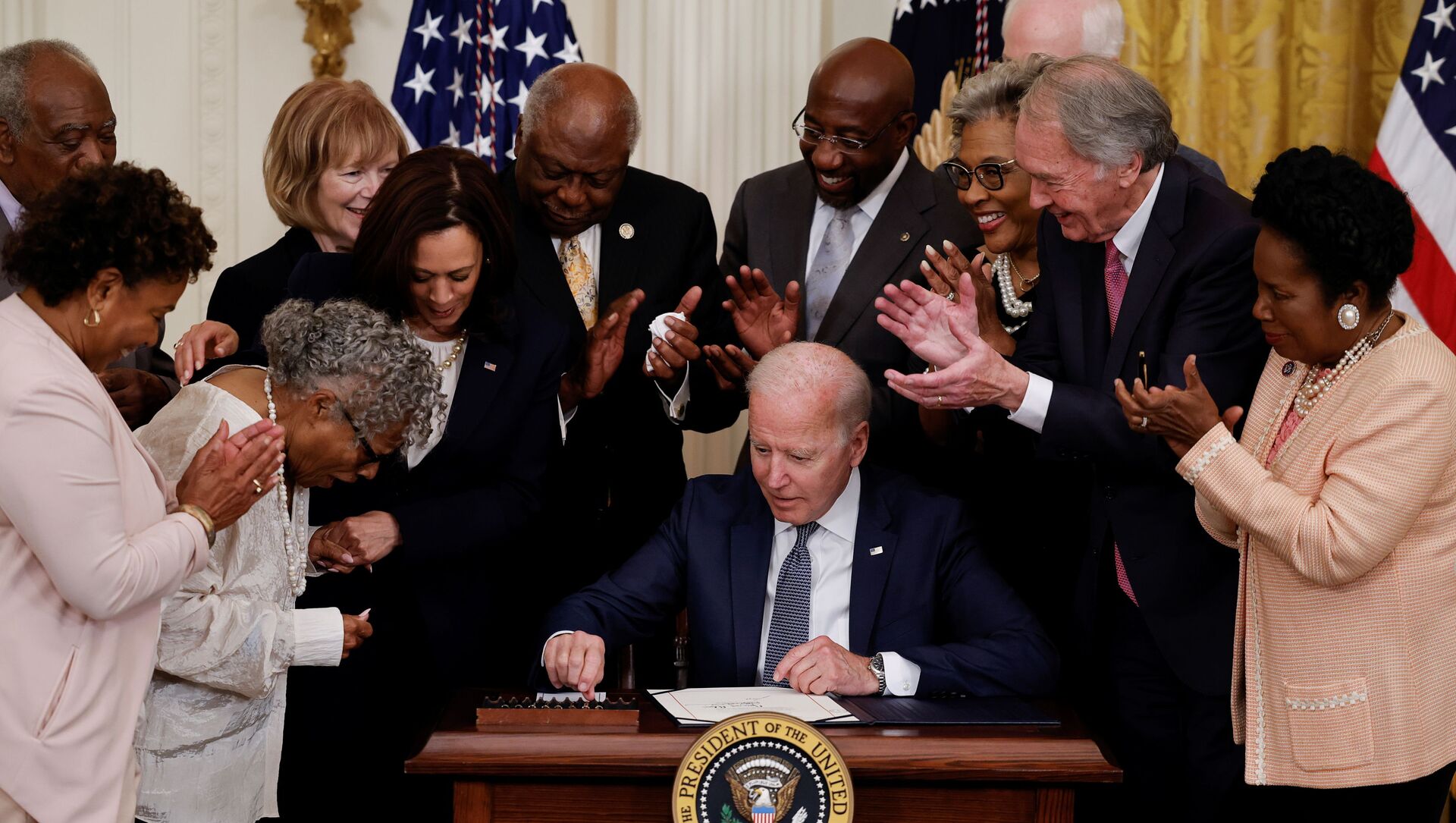 Evan Craighead
All materialsWrite to the author
While the White House is just now recognizing Juneteenth as a national holiday, June 19 has historically been observed nationwide as a day to commemorate the emancipation of African American victims of chattel slavery in the United States.

US President Joe Biden on Thursday signed the "Juneteenth National Independence Day Act," officially establishing Juneteenth - June 19 - as a federal holiday in the US.

"I regret that my grandchildren aren’t here, because this is a really, really, really important moment in our history," Biden said prior to signing the bill into law.

And with the stroke of many pens, President Biden signs into law the #Juneteenth bill -- making the day a federal holiday.

The Senate passed the bill unanimously, only 14 House Republicans, many representing states that were part of the slave-holding Confederacy, opposed it. pic.twitter.com/PoKzxIotcA

Juneteenth has remained a celebration of the emancipation of enslaved Africans in the US since 1865, when Union soldiers under General Gordon Granger delivered General Order Number 3 to Galveston, Texas.

"The people of Texas are informed that in accordance with a Proclamation from the Executive of the United States, all slaves are free," the order read. "This involves an absolute equality of rights and rights of property between former masters and slaves, and the connection heretofore existing between them becomes that between employer and hired laborer."

The move came about after the Emancipation Proclamation, and ended the legal practice of slavery in the state of Texas.

"Juneteenth marks both a long, hard night of slavery and a promise of a brighter morning to come," Biden remarked during the signing event, proclaiming "great nations don't ignore their most painful moments."

First Lady Dr. Jill Biden announced on Twitter that she was "so proud" of her husband's action.

Prior to reaching Biden's desk, the bill unanimously passed in the US Senate, but encountered pushback from 14 Republicans in the US House of Representatives.

Brooks asserted in a recent statement that his 'no' vote was not in opposition of the commemoration of the freeing of enslaved Africans in the US.

"The day the Emancipation Proclamation was signed, or the days the 13th, 14th or 15th amendments were passed, or the end of the Civil War would be more appropriate," said a spokesperson for the US representative from Alabama.

"He would also prefer that another federal holiday be eliminated to offset the $1 billion price tag associated with giving federal workers the day off," the spokesperson added.

Due to Juneteenth falling on a Saturday this year, federal employees will receive paid time off for Friday, June 18, this year, according to the US Office of Personnel Management. Government offices will also be closed for the day.