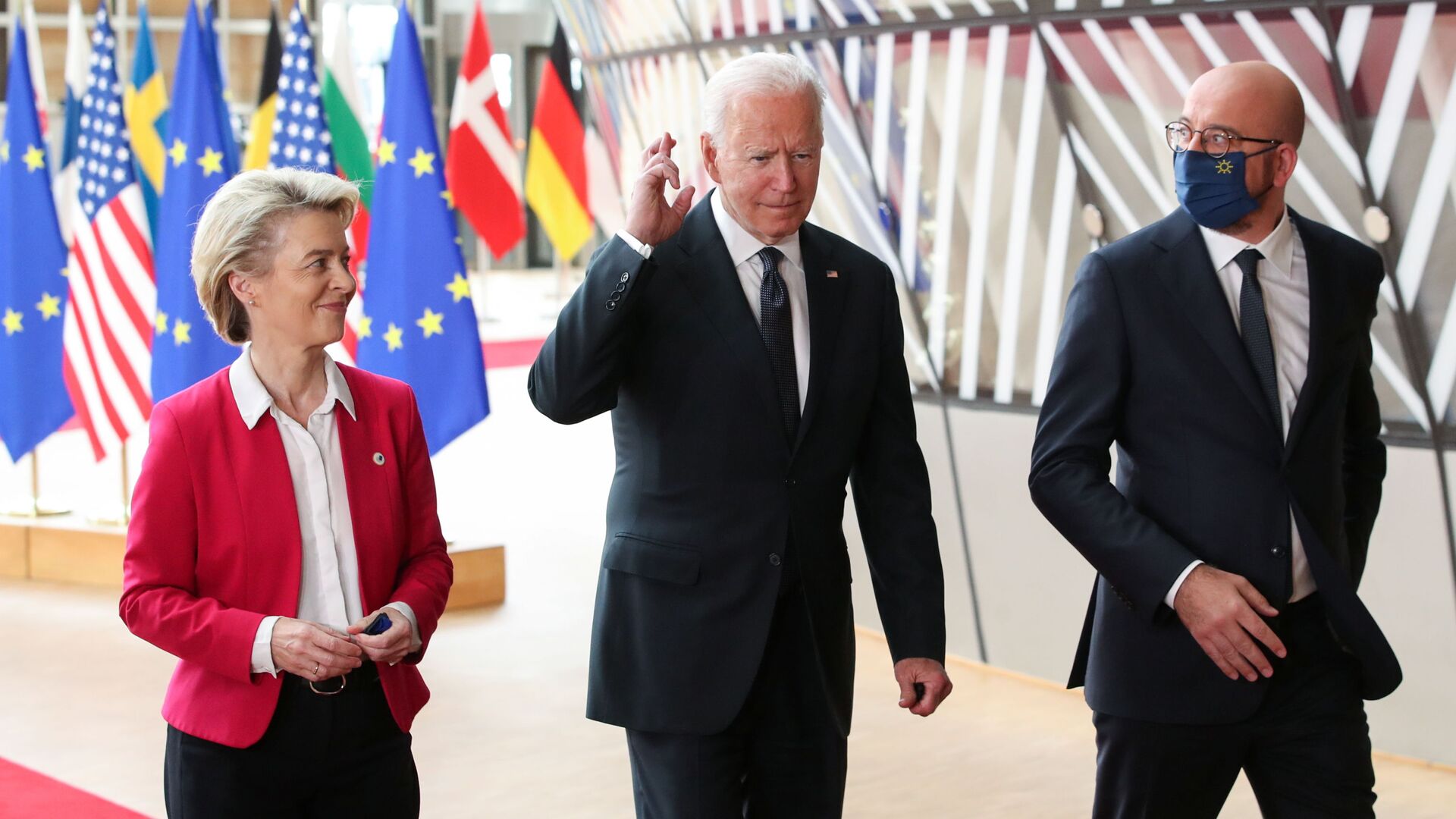 Finian Cunningham
All materials
US President Joe Biden prepared for his summit with Vladimir Putin by first meeting EU heads to sound out their views on how to engage the Russian leader.

Biden reportedly had private talks with European counterparts during the G7 gathering in England last weekend, then with NATO members in Brussels, followed by the heads of the European Union the day before he flew to Geneva for a landmark summit with Putin.

After his confab with EU chiefs Ursula von der Leyen and Charles Michel, it was agreed that the Americans and Europeans would continue to have high-level discussions to “better coordinate policy and actions” towards Russia.

“We stand united in our principled approach towards Russia and we are ready to respond decisively to its repeating pattern of negative behavior and harmful activities, which Russia must address to prevent the further deterioration of relations,” it was declared.

This is tantamount to the blind leading the blind with regard to relations with Russia. The Americans consulting with Europe, and vice versa is a dead-end or maybe even a path to the abyss.

Both of them are hopelessly misinformed by ignorance, bigotry and Russophobia for either of them to find a workable relation with Russia. What chance therefore of formulating realistic policy and actions that could lead to normalizing relations? If anything, their negative mindsets will only compound problems.

Let’s go back to the declaration cited above. The American and European leaders assertively accuse Russia of “its repeating pattern of negative behavior and harmful activities, which Russia must address to prevent the further deterioration of relations”.

What “negative behavior” are they referring to?

Interference in American and European elections? There’s absolutely no proof for that and it’s based on ropey politicized intelligence and innuendo. Listening to Western politicians and media, however, the ropey speculation is cited as an article of faith. That’s indoctrination, not reasonable thinking. Russia has consistently and vehemently rejected the claims as “unfounded”.

Annexation of Crimea? The Crimean people voted to join the Russian Federation in a legally held referendum in March 2014 after the US and EU backed a coup d’état in Kiev ushering Neo-Nazis into power. Crimea has centuries of shared Russian history and culture. Ignorance of Western politicians and media cannot erase that.

World
Biden Says Ukraine Must Clean Up Corruption, Meet Other Criteria Before Joining NATO
Aggression towards Ukraine? The Kiev regime armed by the United States and NATO is shelling the ethnic Russian population of Eastern Ukraine in violation of a ceasefire and the 2015 Minsk accord. Russian military buildup and maneuvers are conducted within its own sovereign territory while NATO forces encroach near Russia’s borders.

Supporting a dictator in Syria? Russia stopped a criminal covert war of aggression by NATO powers using terrorist proxies to overthrow an elected president, Bashar al-Assad, who has since been re-elected by Syrians freely and fairly. Russia defended a sovereign nation. The Western powers attacked it covertly and continue to impose crippling sanctions on Syria preventing its reconstruction from war.

Poisoning Alexei Navalny? The blogger is a convicted embezzler who has a history of staging provocations in collusion with Western intelligence agencies. Where is the proof that he was poisoned? It’s just ridiculous hearsay repeated over and over using the Big Lie technique.

The contemptible thing is this: if you believe the above accusatory claims and much more besides, then how is it possible for Russia to “change its behavior to prevent further deterioration of relations”? How is Russia able to convince certain ideologically twisted people who have been instilled with delusions and falsehoods that it “has changed”?

World
Biden Privately Asked NATO Leaders for Advice Ahead of Summit With Putin, US Official Says
The problem is not Russia or its alleged malign conduct. The problem is the false perception and brainwashed bigotry that resides in Western leaders and media.

That would explain the schizoid, contradictory position of the United States and Europe toward Russia (and indeed toward China too).

The Western powers are held hostage mentally by their own pejorative propaganda. Their politicians are infected with ideological constructs demonizing Russia. Therefore, they literally can’t think straight or rationally when it comes to formulating policy and relations with Russia (or China).

On one hand, Joe Biden and his European allies talk about holding dialogue with Russia to work on areas of common interest. While on the other hand, they talk about confronting Russia and holding it to account… based on false allegations.

The Americans and Europeans are approaching Russia (and China) based on blind ignorance and the blind arrogance that stems from that. It’s not possible to have productive, normal relations based on blindness. The Americans and Europeans are going to tumble over themselves in pursuing a futile, wasteful dead-end policy. At worse, they could stumble the rest of the world into a catastrophic war.