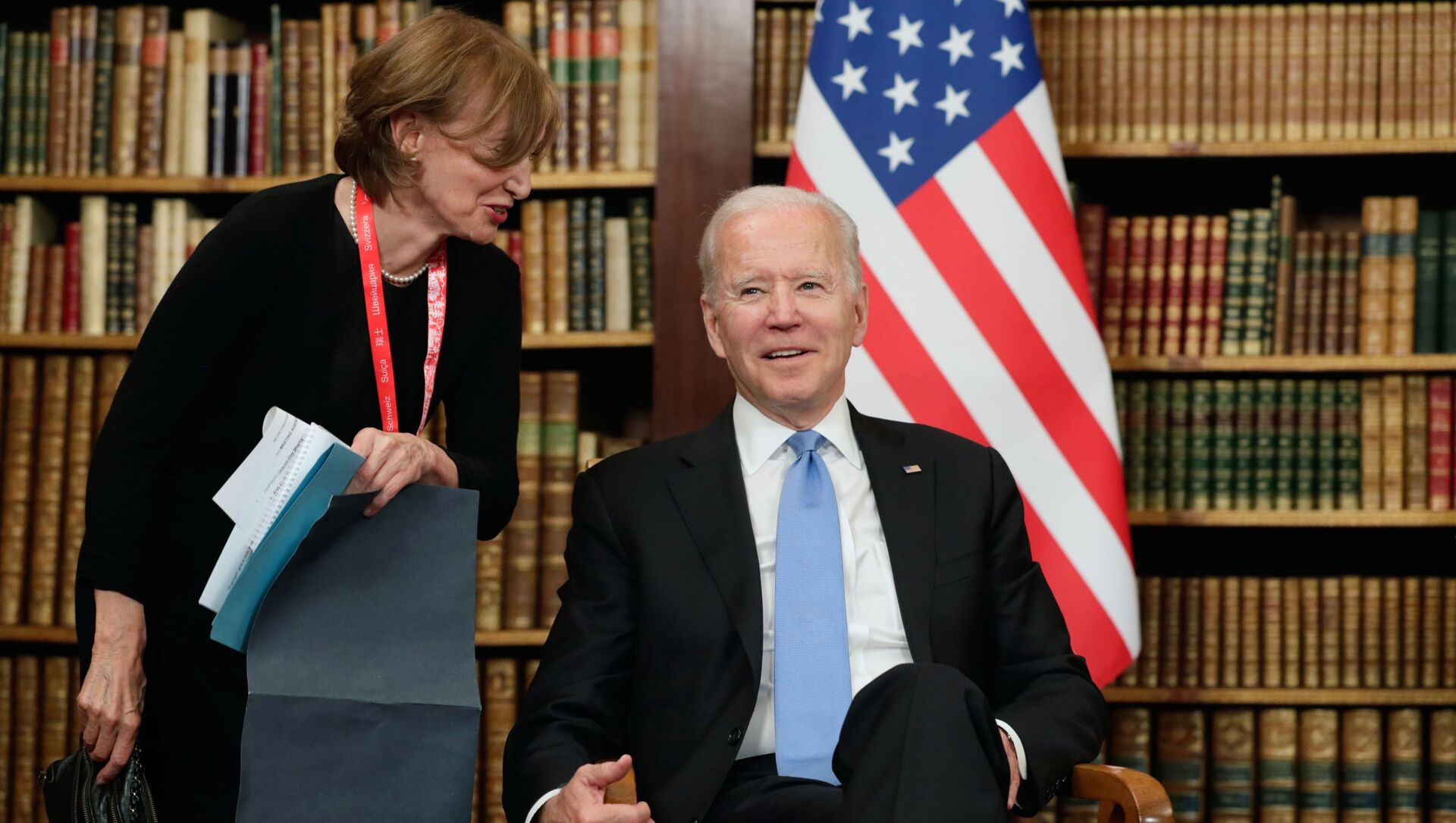 Ilya Tsukanov
All materialsWrite to the author
The Russian and US presidents are holding their face-to-face meeting in Geneva, Switzerland on Wednesday, with the summit – the first of its kind since 2018 – taking place amid the latest escalation of tensions between the two nuclear superpowers.

Social media users don't quite know what to make of the small paper slips brought by Joe Biden to the public part of Wednesday’s summit meeting with Vladimir Putin, with many netizens poking fun at the US president, while others have expressed concern about the bad optics of the situation for the US side.

“Biden brought his flashcards into his meeting with Putin,” conservative political columnist Benny Johnson wrote in a tweet that's gone viral, accompanying the post with a short clip of the US president reaching down for the small stack of papers as Putin begins to speak. “Telling,” Johnson added in a second tweet, screen grabbing photos of Biden grasping the cards.

Some users have joked that the flashcards may contain the US leader’s well-known "Bidenisms."

I'm surprised the FSB didn't manage to swap them with these... pic.twitter.com/Jf9m4UDLr1

“Flashcards still won’t help him,” another critic suggested. “Still at least he’s not meeting Putin on his own without any recording or note-taking,” another observed. “He can’t read a teleprompter so I’m guessing those cards are just a prop,” one mean-spirited commentator suggested. “This is so embarrassing,” yet another quipped.

Others defended Biden, however, with one user suggesting that “compared to the sheets of notes Putin users, I find flash cards much more efficient for world leaders to reference at summits.” “All the better to be prepared,” another argued. Others recalled Donald Trump’s history of using paper-based aides at his meetings with world leaders.

Compared to the sheets of notes Putin uses, I find flash cards much more efficient for world leaders to reference at summits. pic.twitter.com/O7g4gFFOgT

You're right, he needs some big ass print outs so that he can hold them over him. Real leaders bring in their art projects. pic.twitter.com/mXmeGYruDi

Some supporters even went so far as to rehash the tired old claims that Biden’s predecessor was a "Russian agent." “Trump didn’t need any cards because he wasn’t allowed to bring up anything to his master,” a user wrote.

Just shows he can’t hold a regular conversation without someone giving him his words.

Others still expressed security concerns over the meeting, suggesting that “this is not going to end well” and dramatically urging people to “pray for America, this day, above every other day.”

Presidents Putin and Biden are holding a marathon summit meeting in Geneva, Switzerland on Wednesday. The negotiations are expected to last up to five hours. The Russian and US leaders are not expected to hold a joint press conference afterward.

World
Geneva Summit Live Updates: Putin, Biden Sign Declaration to Ensure Nuclear War is Never Unleashed
The meeting is Putin and Biden’s first-ever face-to-face contact since Biden became president, with the two previously holding telephone talks earlier this year. The summit comes after months of escalating tensions between Moscow and Washington, with disagreements stemming from unprecedented new US sanctions on Russian sovereign debt, threats to cut Russia off from a global banking telecommunications system, the beefing up of NATO troops, patrols and drills along Russia’s borders, fresh US claims about Russian hacking, and other issues.
Newsfeed
0
Access to the chat has been blocked for violating the rules . You will be able to participate again through:∞. If you do not agree with the blocking, please use the feedback form
The discussion is closed. You can participate in the discussion within 24 hours after the publication of the article.
To participate in the discussion
log in or register
loader
Chats
Заголовок открываемого материала