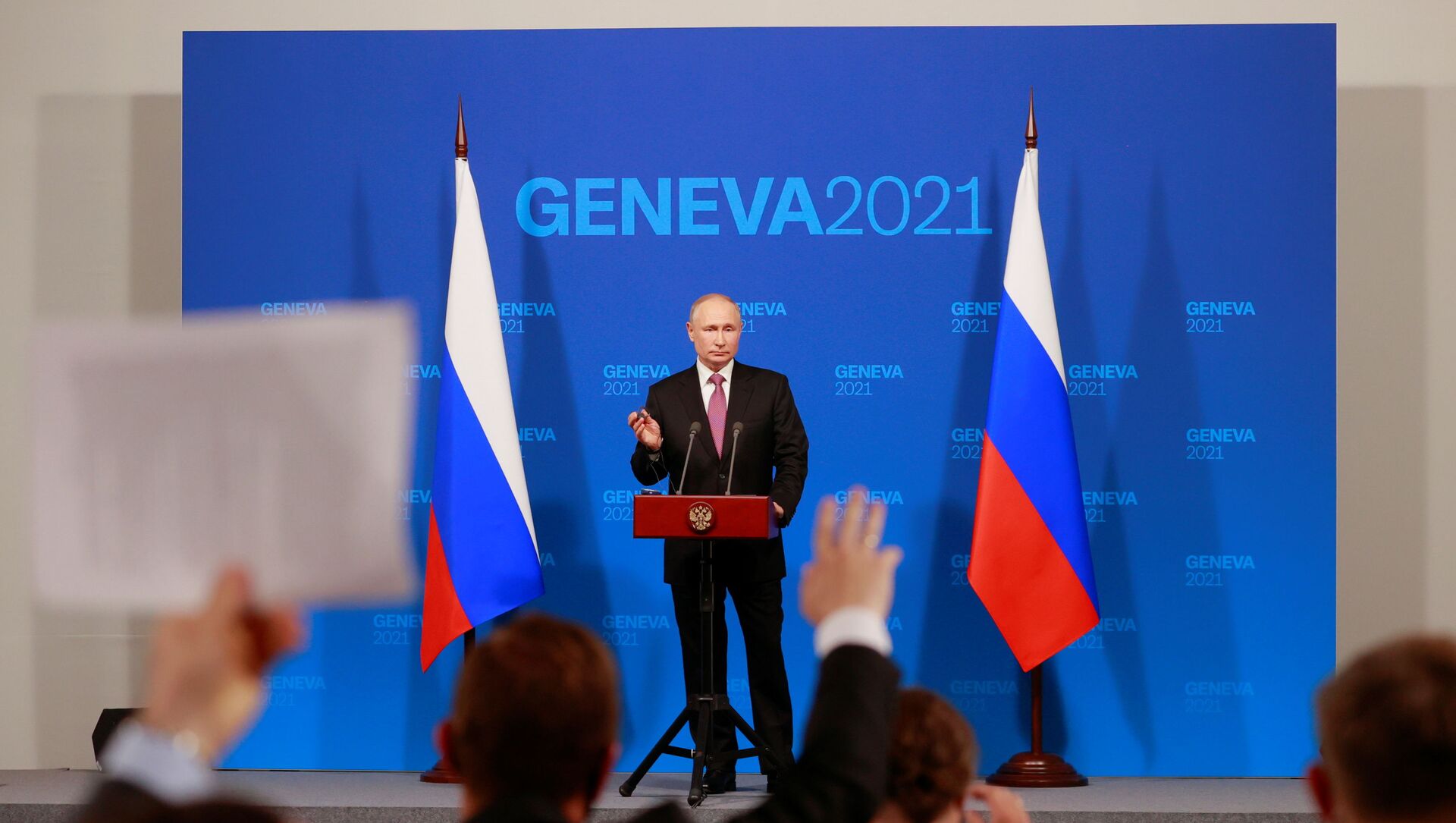 Ilya Tsukanov
All materialsWrite to the author
The Russian and US presidents held a marathon 4.5 hour summit meeting in Geneva, Switzerland on Wednesday, discussing a broad range of issues.

Russia and the US agree that it is their special responsibility to ensure global strategic stability as the world's nuclear powers, Russian President Vladimir Putin has said.

"The United States and the Russian Federation bear a special responsibility for strategic stability in the world, proceeding from the fact that they are the two major nuclear superpowers in terms of nuclear warheads, re-entry vehicles and delivery means, as well as the weapons' quality and up-to-dateness," Putin said, speaking to reporters following his summit with Biden on Wednesday.

Putin and Biden signed a joint statement on the issue following their summit.

"We...note that even in periods of tension, the United States and Russia have demonstrated that they are able to make progress in our shared goals of ensuring predictability in the strategic sphere, reducing the risk fo armed conflicts and the threat of nuclear war," the statement, posted to the Kremlin's official website, says. "The recent extension of the New START Treaty exemplifies our commitment to nuclear arms control. Today, we reaffirm the principle that a nuclear war cannot be won and must never be fought," it adds.

NATO May Speak Up Against Deployment of Land-Based Nukes in Europe - Report
"Consistent with these goals, the United States and Russia will embark together on an integrated bilateral Strategic Stability Dialogue in the near future which will be deliberate and robust. Through this Dialogue, we seek to lay the groundwork for future arms control and risk reduction measures," the statement concludes.

Whose Troops are on Whose Borders?

Elsewhere in his remarks to the press Wednesday, Putin commented on the heightened military tensions between Russia and the US and its allies, and Washington's "concerns" about Russia's military activities.

"We conduct exercises on our territory in the same way that the United States conducts many exercises on its own territory. But we don't engage in drills by dragging our military equipment and personnel to the state borders of the United States of America. Unfortunately, our American partners are doing this right at this very moment. Therefore, 'concerns' about this situation should be expressed not by the American side, but by the Russian side," he said.

On the Ukraine conflict, and Kiev's bid for membership in the NATO alliance, Putin said that the latter issue was not discussed at any length due to the differing positions of the Russian and US sides. He added that he and Biden had agreed that the Minsk agreements should serve as the basis for settling the long-running frozen civil war in eastern Ukraine.

Putin also confirmed that Russia and the US had reached an agreement to return one another's ambassadors to their respective diplomatic postings.

"As for the return of the ambassadors to their posts - the US ambassador to Moscow and the Russian ambassador to Washington, we agreed on it, this issue has been resolved," Putin said.

Russian Ambassador to the United States Anatoly Antonov left Washington and returned to Russia in April for consultations in the wake of a diplomatic scandal that came about after Biden agreed with a journalist's characterization of Putin as a "killer" with no soul. US Ambassador to Russia John Sullivan left Moscow the same month. The diplomatic spat was exacerbated after the Biden administration slapped Russia with a new round of sanctions, targeting the country's sovereign debt and introducing other major financial and banking sector restrictions on the Eurasian nation.

On other issues, Putin confirmed that the topic of the Arctic had been discussed "in detail" at the summit. Commenting on Russia's Arctic claims, the president stressed that it was Moscow's sovereign right to determine whether or not to allow foreign ships to pass through inland seas in the Arctic or not, but that Russia was not abusing this right.

He also confirmed that the Russian Foreign Ministry and the US State Department would work on the question of the exchange of prisoners following the summit.

How Biden's Effort to Weaponise Human Rights Against Russia May Backfire on Washington
As to US claims about Russia's violations of human rights, Putin wryly pointed out that the US's illegal detention center at Guantanamo Bay was still open. Commenting on the Black Lives Matter protest movement in the United States, Putin said that while Russia sympathizes with the American people, it does not want and will not allow for similar widespread unrest to take place on its territory. The same goes for the riots that took place at the US Capitol complex in Washington, DC in January, he said.

On economic and trade ties between Russia and the US, Putin said that everything depends on Washington in this regard, as it's not the Russian side introducing sanctions and other restrictions. He added that the restrictions already imposed have cost the US just as much they have Russia.

Biden's Soul and Illusions About the United States

Putin also answered a question about Biden's soul, and about 'what he saw in Biden's eyes' at his face-to-face meeting with the US president. "About his soul I cannot comment, but he is a very level-headed and constructive dialogue partner," Putin said. Asked whether he had any illusions about relations with the US after meeting with Biden, Putin said: "I did not have any illusions to begin with, they do not and cannot exist."

Asked about US laws which pressure Russian media operating in the US, Putin said that while Sputnik and RT, which have been labeled as foreign agents by the US, comply with US laws, American media often do not.

Commenting on his impressions overall, Putin said he felt that "we generally spoke the same language, but this does not at all means that we must look into one another's souls, into one's eyes and swear in eternal love and friendship. Not at all."

Asked to describe for children on the significance of Wednesday's meeting with Biden, Putin said: "We met to make the world a safer place for all its inhabitants."