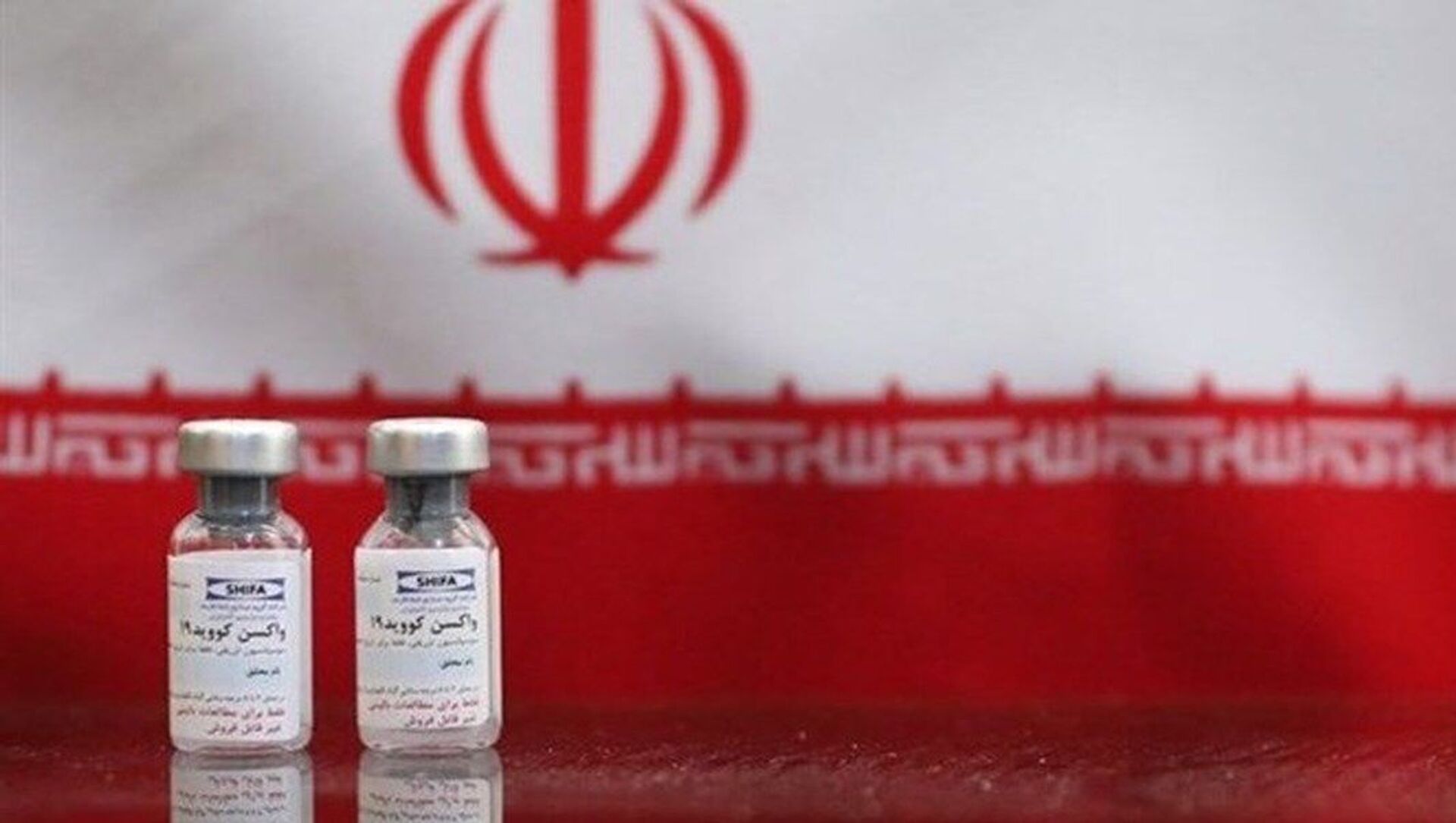 CC BY 4.0 / FARS NEWS AGENCY / COVIran Barakat VACCINE
Subscribe
Ilya Tsukanov
All materialsWrite to the author
Crushing US sanctions have restricted Iran’s ability to import medical supplies, including foreign-made vaccines against the coronavirus. This spring, President Rouhani blasted the US for “blocking” the implementation of an international vaccine agreement which would have provided Tehran with millions of vaccine doses.

Iran will soon emerge as one of the largest producers of coronavirus vaccines in the world, Health Minister Saeed Namaki has announced.

“From next week, the second group of Iranian-made vaccines will be licensed for distribution, and the next group will be licensed and distributed one after the other after that,” Namaki said, speaking at a ceremony to open a new hospital in Iran’s Isfahan province on Tuesday, his remarks quoted by the Islamic Republic News Agency.

“Iran will be one of the largest producers of coronavirus vaccines in the world by the end of this summer,” the official promised.

Iran authorised the emergency use of its first homegrown coronavirus vaccine – COVIran Barekat – on Monday. The inactivated vaccine, similar to a polio shot, created by the state-owned Shifa Pharmed Industrial Group, is the first locally-made preparation to be approved for emergency use in the Middle East, and has an estimated efficacy rate of 90 percent. Iranian specialists began work on the vaccine in early 2020, and human trials started in late December. Some 20,000 people in cities including Tehran, Bushehr, and Isfahan volunteered to take part in the trials.

Iran Creates Spray Against Coronavirus, State Media Says
Now that the vaccine has been approved, Iranian authorities expect to eventually ramp up its production to up to 20-25 million doses per month.

In his comments on Tuesday, Dr. Namaki also recalled foreign vaccine makers’ failure to honour their commitments to Iran on the delivery of vaccines, and said that Tehran had worked to successfully remedy a series of problems related to the import of the antiviral preparations.

Iran has approved the emergency use of foreign vaccines including Russia’s Sputnik V, India’s Covaxin, and the Oxford/AstraZeneca preparation made by Russia’s R-Pharm Group and South Korea’s SKBio.

In addition to COVIran Barekat, the Pasteur Institute of Iran has worked with its counterparts in Cuba to create a second Iranian-made vaccine. That preparation is expected to be authorised for emergency use next week.

Earlier this year, Iranian Supreme Leader Ayatollah Ali Khamenei alleged that coronavirus vaccines made in the US, UK, and France were “untrustworthy” and forbade their import.

“They’re completely untrustworthy. It’s not unlikely that they would want to contaminate other nations,” Khamenei suggested, referring to the US and British preparations. Regarding France, the leader recalled Paris’ experience in shipping HIV-tainted blood supplies to Iran in the 1980s. The practice caused a major scandal in the early 1990s and rocked multiple countries, including France itself, Canada, Iran, Iraq, and several European countries. Hundreds of Iranians were infected with HIV as a result of the tainted blood deliveries.

Cuba's Vaccine Revolution: The Island of Freedom Developing Whopping Five Anti-COVID Jabs
Amid their criticism of US-made vaccines, Iranian officials have also repeatedly criticised Washington over its crushing sanctions – which has led to restrictions on the country’s ability to import basic medicines amid the pandemic. Foreign Minister Mohammed Javad Zarif has repeatedly accused the US of engaging in “economic terrorism.” President Rouhani, meanwhile, has characterised US behaviour in the blocking of 16.8 million vaccine doses as a “crime…against the Iranian people.”

Iran temporarily became the second-most heavily affected country in the world after China after the coronavirus pandemic began last year, with multiple officials and lawmakers infected by or even succumbing to the mystery disease. Iran has reported a total of three million cases of COVID-19 and 82,217 deaths to date.

000000
Popular comments
Best country in the World, proper people, unlike Uncle Sham's bastard offspring IsIsrael.
wtfud
15 June, 19:25 GMT6
000000
Even with those sanctions in place, even with many Iranians dying, the world is not laughing about Iran but laughing about the USA who had the ability to vaccinate its people without being sanctioned by anyone but still decided to let many Americans to die and making it the first thing Biden had to jump on because a previous president refused to buy cheap and effective vaccins from China and Russia. In the meantime hardship boosted the Iranian medical sector and deprived western factories from selling another at least 160 million vaccins to Iran. Indeed the USA is among those countries that harm their own people and economy instead of being harmed by any other.