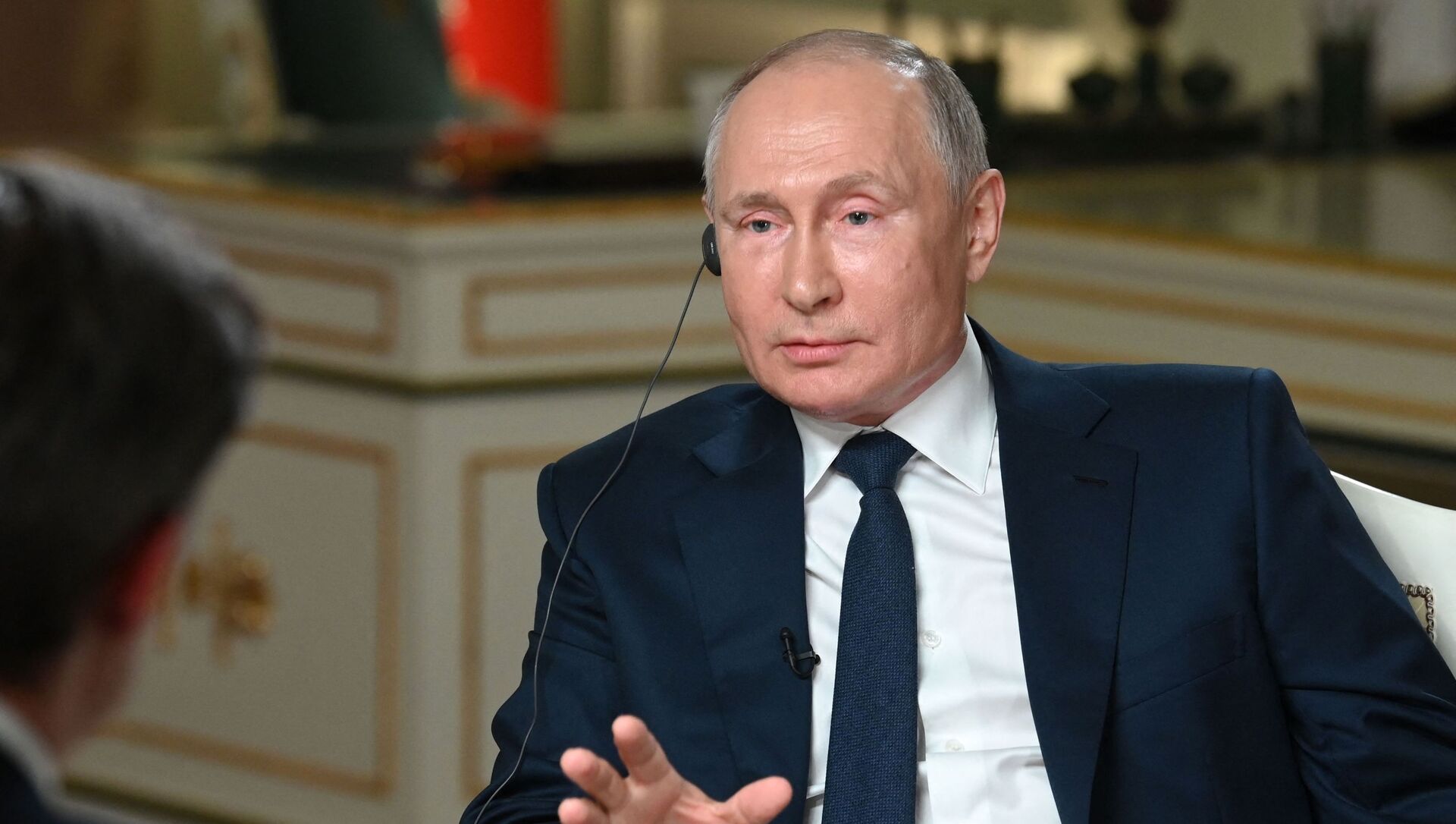 © AFP 2023 / MAXIM BLINOV
Subscribe
International
India
Africa
Henry Batyaev
All materialsWrite to the author
A series of high-profile cyberattacks have hit US facilities over the past few months, including a ransomware attack against a major gas pipeline and a meat-producing giant. Washington has accused hackers operating in Russia as being behind both attacks.

US claims of Russian hackers or the Russian government of being behind cyberattacks in the United States are absurd, Russian President Vladimir Putin told NBC in a wide-ranging interview on Monday.

"We have been accused of all kinds of things", Putin said. "Election interference, cyberattacks, and so on and so forth. And not once, not once, not one time, did they bother to produce any kind of evidence or proof. Just unfounded accusations".

The Russian president reiterated Moscow's calls to cooperate in the fight against cybercrime, raising hope that the two sides "will be able to set up this process".

He expressed concern that the United States, being a high-tech country, has the capability and intent to target Russia.

“The US is a high-tech country, NATO has declared cyberspace an area of combat, it means they are planning something, they are preparing something. So, obviously, this cannot but worry us. I'm not afraid, but I bear in mind that it is a possibility", he told NBC.

A major US fuel transporting facility Colonial Pipeline was targeted by a ransomware attack on 7 May, which triggered a gas outage crisis across a handful of US states. The attack was attributed to an unknown group of allegedly Russian-speaking hackers. However, President Joe Biden said on several occasions that there was no evidence Russia was involved.

Just weeks later, a cyberattack on an international company and the world's largest meat producer, JBS Foods, led to the temporary closure of all of its beef factories in the United States. The US administration said it believes some of the members of the hacker groups reside in Russia.

When the NBC journalist suggested that Navalny was not just any prisoner, the Russian president said: "He will not be treated any worse than anybody else".

In January, Navalny returned to Moscow from Berlin after receiving medical treatment for an alleged poisoning. The activist was arrested upon arrival and referred to a court, which in February rescinded his suspended sentence in the 2014 Yves Rocher fraud case over multiple probation breaches and replaced it with a 3.5-year term behind bars. A Moscow city court reinstated the ruling but reduced the sentence to 2.5 years.

The Russian president stated that he would consider a prisoner exchange with the United States as there are more Russians in US prisons than Americans in Russian jails.

He said that US prison administration ignored health problems of former Russian pilot Konstantin Yaroshenko, who is serving a 20-year sentence in the United States.

Yaroshenko was arrested in Liberia in 2010 on suspicion of drug trafficking. He was extradited to the US and sentenced to 20 years in prison a year later, allegedly for taking part in a conspiracy to smuggle a large amount of drugs into the country. Yaroshenko has denied all charges.

In response to the interviewer's question about Russia's troop movements near the Ukrainian border, Putin hit back saying that the nation carries out its military exercises on its own soil, whereas NATO routinely conducts manoeuvres near the Russian border.

"Imagine if we sent our troops into direct proximity to your borders", Putin said. "What would have been your response?"

Putin dubbed NATO a relic of the Cold War-era, adding he is not "sure why it still continues to exist".

Moscow, has repeatedly expressed concern regarding an increased NATO military presence in Europe, including the Alliance’s ongoing eastward expansion.

The Kremlin has also underscored that Russia poses no threat to other nations, but it will not ignore actions that endanger its national interests.

Putin denied that Russia was planning to end its cooperation with the United States in space, insisting that one of the last remaining areas of common interest between the two countries was still on despite threats to the contract from his space agency chief.

"I think you just misunderstood", Putin said when asked about reports that Moscow planned to withdraw from the International Space Station project. "We are interested in continuing work with the US in this direction, and we will continue to do so if our US partners don't refuse to do that".

Russia is open to cooperation with other countries in space but strongly opposes militarisation in this area, President Vladimir Putin said.

"We don't rule out cooperation with many world nations in space. But probably everybody knows very well our position in terms that we are categorically against space militarisation altogether", Putin said.

Putin said Moscow believes that space should be free from any and all kinds of weapons located in near-Earth orbits.

"We don't have these kinds of plans or any plans, especially concerning the transfer of technology of the level that you have just described", the Russian president added.

The Russian president told NBC that he sees attempts to destroy the relationship between Russia and China, who are bonded by what he described as a "strategic partnership".

"I will tell you completely honestly ... We can see attempts at destroying the relationship between Russia and China. We can see that those attempts are being made in practical policies. We are pleased with the level of our relationship which as I said is unprecedentedly high as it has developed over the last few decades. And we cherish it. Just like our Chinese friends cherish it", he said.

He added that he did not see any threats coming from Russia’s neighbour China.

"We do not believe that China is a threat to us. That's one. China is a friendly nation. It has not declared us an enemy, as the United States has done", he said when asked whether he was concerned about China’s militarisation.

Putin said Russia had developed an unprecedented strategic partnership with China across a wide range of areas, from politics and economy to the defense industry.

Asked whether Russia’s decision to quit the ISS space station project meant it was splitting off from the US space programme and moving forward with China, Putin said that Moscow was ready to work together with both Washington and Beijing.

"We will continue to do so if our US partners don't refuse to do that. It doesn't mean that we need to work exclusively with the US. We have been working and will continue to work with China, which applies to all kinds of programmes, including exploring deep space", he said.

On Taiwan, which China considers its territory, Putin said that he had no knowledge of China’s purported plans to make a military move on the island nation. He declined to speculate what Russia would do if China invaded Taiwan, saying there was no "could be" and "would be" in politics.

It was the Ryanair pilot's decision to land the plane in Belarus, and even if he was forced to do so by Belarusian leader Alexander Lukashenko, it was only because the latter was inspired by the US' 2013 grounding of the Bolivian president's plane, Putin remarked.

"The pilot made a decision to land in Minsk. That is all. Why should I not believe him? Ask the pilot. It's the simplest thing. Ask the chief pilot. Ask the commander of the aircraft. Did you ask him if was he forced to land? Because I have not heard or seen an interview with the commander of the aircraft that landed in Minsk. Why not ask him? ... Everybody accuses Lukashenko, but the pilot hasn't been asked", Putin said.

He then recalled a similar situation when the US administration forced the Bolivian president's plane to land in Vienna.

"Air Force One, a presidential plane, was forced to land. The President was taken out of the aircraft. They searched the plane. And you don't even recall that. Do you think it was normal, that was good, but what Lukashenko did was bad? Look, let us speak the same language and let us use the same concepts. If, well, Lukashenko is a gangster, how about the situation with the Bolivian President? ... Nobody is bringing that up", Putin said.

In May, a Ryanair airpplane traveling from Greece to Lithuania made an emergency landing in Minsk over a bomb threat, which turned out to be fake. Two of its passengers, Roman Protasevich, the founder of a Telegram channel that Belarus has designated as extremist, and his girlfriend, Russian national Sofia Sapega, were detained during the stopover.

Putin's expansive interview with NBC comes just mere days before the Russian president is expected to sit down for talks with his US counterpart Joe Biden in Geneva, Switzerland.