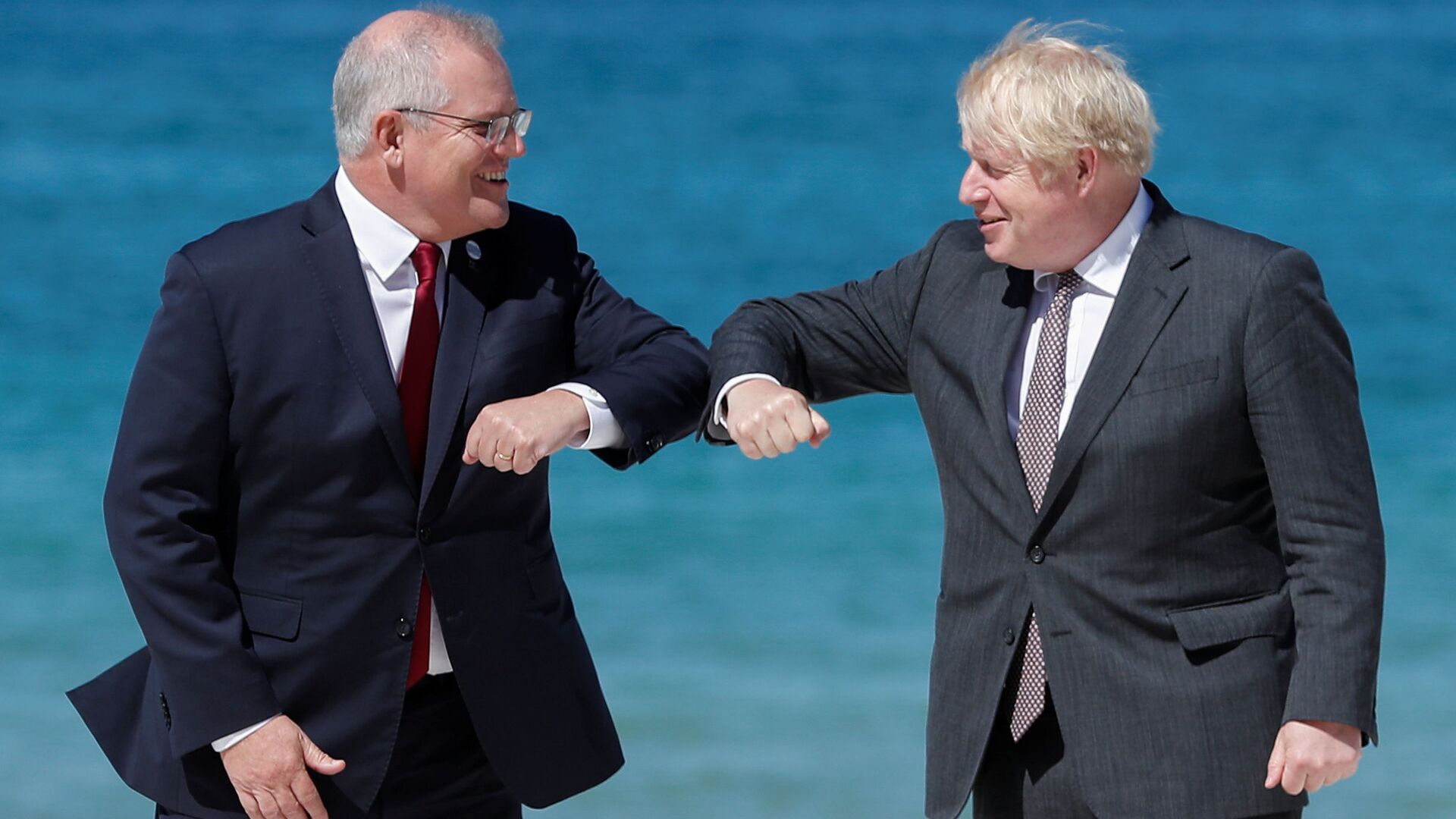 Zara Muradyan
All materials
The Australian prime minister held a meeting with the US president on the sidelines of the G7 summit in England, where the two agreed to work closely on "challenges" in the Indo-Pacific region, among other things.

Scott Morrison was hoping for a one-on-one meeting with US President Joe Biden at the G7 summit in the UK, however, event host, British Prime Minister Boris Johnson frustrated his plans by crashing their tête-à-tête.

The Australian prime minister was invited to this year's G7 Summit in Carbis Bay, Cornwall and was set to meet Biden in a bilateral setting.

When Morrison was asked why the supposed private meeting suddenly included a third party, the prime minister said "it was an opportunity that presented because we're all here and so it was mutual".

"We were particularly keen to have the discussion with both parties", he added.

So legit question: where is the Australian flag? Johnson and Biden represented by their flags but not Morrison? Was this unplanned? Is it just out of shot? Did he forget to bring it? pic.twitter.com/b3ZiCFtlVI

The incident has prompted great speculation as to why Morrison was unable to secure a bilateral meeting with the US president.

"This seemed to me like it was Boris Johnson stepping in what seemed like it might be a little awkward meeting, given Morrison's full-on support for [former US President Donald] Trump", Nikki Sava, a former adviser to ex-Australian Prime Minister John Howard, told ABC's Insiders.

Viral
Australian Labor Party Savaged Online After Trying to Bash Scott Morrison With Trump's Image
Many others ventured that Johnson's decision to make the meeting trilateral was motivated by a willingness to make discussions about climate change productive.

Labour's Foreign Affairs Spokesperson Penny Wong called the prime minister's inability to secure a face-to-face meeting with Biden "disappointing", and suggested Morrison's "stubborn refusal" to commit to net zero emissions by 2050 was damaging the country's reputation on the world stage.

"Mr Morrison's stubborn refusal to sign up to net zero emissions has left him isolated and left Australia isolated", she said on Sunday.

Ex-Liberal opposition leader John Hewson, in turn, alleged Biden might "not be prepared to extend Morrison the privilege [of a one-on-one] given his indefensible irresponsibility and stubbornness on climate".

Greens leader Adam Bandt, for his part, thinks the only reason why Morrison was invited to the G7 summit is so the heads of states and governments can rebuke him over Australia's perceived inaction on climate change.

"Climate is a critical issue at this G7. It is the only game in town. When they sit down to discuss climate, Scott Morrison will be sitting at the kids' table and I think part of the reason he's been invited to this summit is so the rest of the world can give Australia a dressing down on climate", Bandt told ABC's Insiders on Sunday.

Meanwhile, Morrison has since rejected those claims, arguing that climate change was not a point of discussion for the meeting and would instead be a topic of conversation at Monday's G7 Plus sessions.

Following the trilateral meeting, Biden, Morrison, and Johnson issued in a joint statement, revealing they had "discussed a number of issues of mutual concern, including the Indo-Pacific region".

Morrison later downplayed any suggestion of a diplomatic snub, describing it as "a meeting of great friends and allies who share a view on the world".

"Australia has no greater friends than the United States and the United Kingdom. It was a great opportunity for my first meeting with the president. I've known Boris for many years, and there was a very easy understanding amongst the three of us".