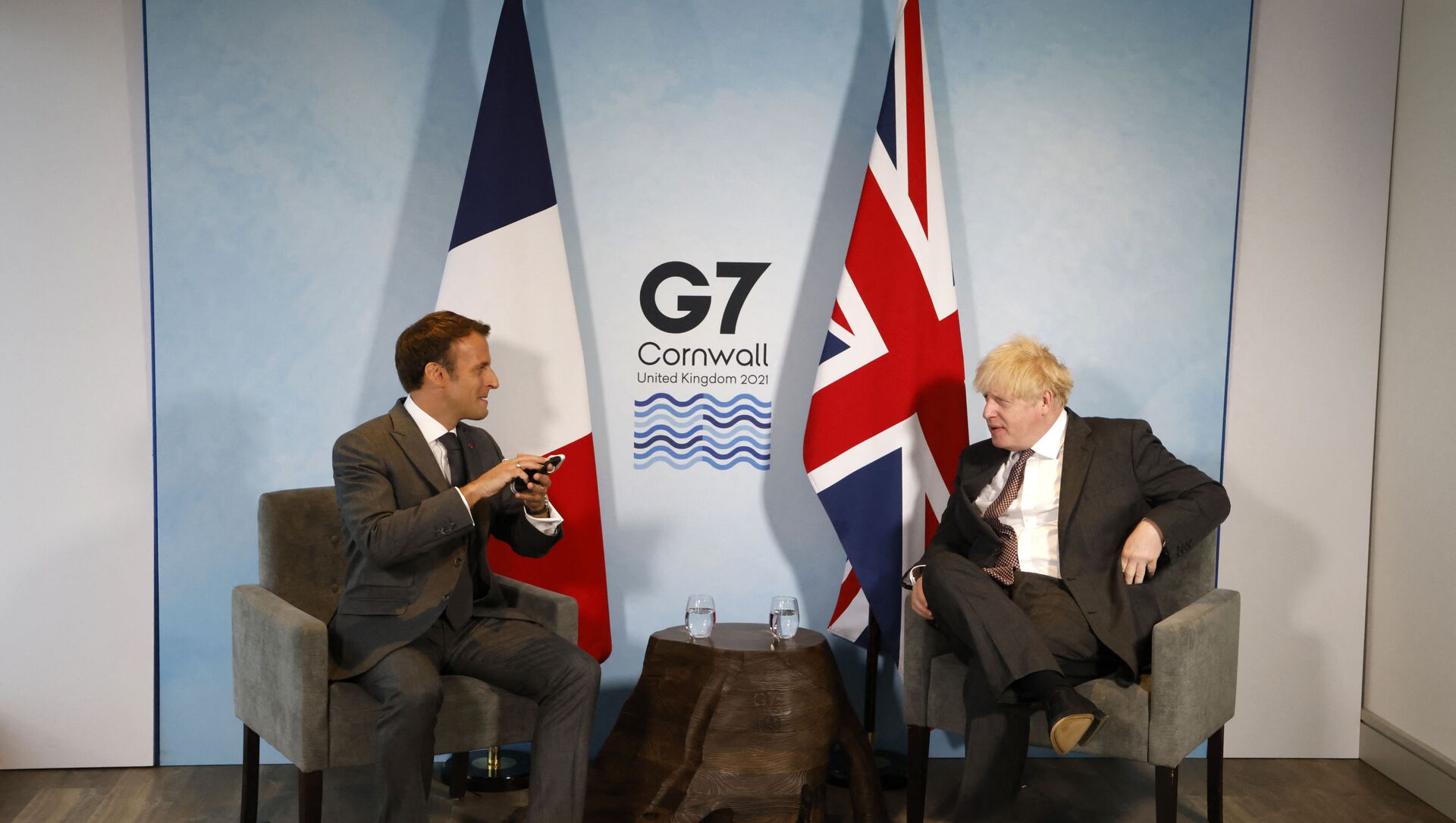 Max Gorbachev
All materialsWrite to the author
The two officials held negotiations in England, which is hosting the G7 summit. Although the meeting was primarily focused on the coronavirus pandemic, economic recovery, and climate change, the leaders also discussed the implementation of the Northern Ireland Protocol, a provision of the Brexit deal.

UK Prime Minister Boris Johnson was allegedly infuriated after French President Macron suggested that Northern Ireland is not part of the United Kingdom, the UK media has reported. During a conversation on the so-called "sausage row" Johnson ostensibly said the following:

"How would you like it if the French courts stopped you moving Toulouse sausages to Paris?"

The French president purportedly replied that this was not a good comparison, noting that Paris and Toulouse are both parts of the same country. According to The Telegraph, citing people familiar with the matter, the remark made Johnson furious and the PM replied: "Northern Ireland and Britain are part of the same country as well". 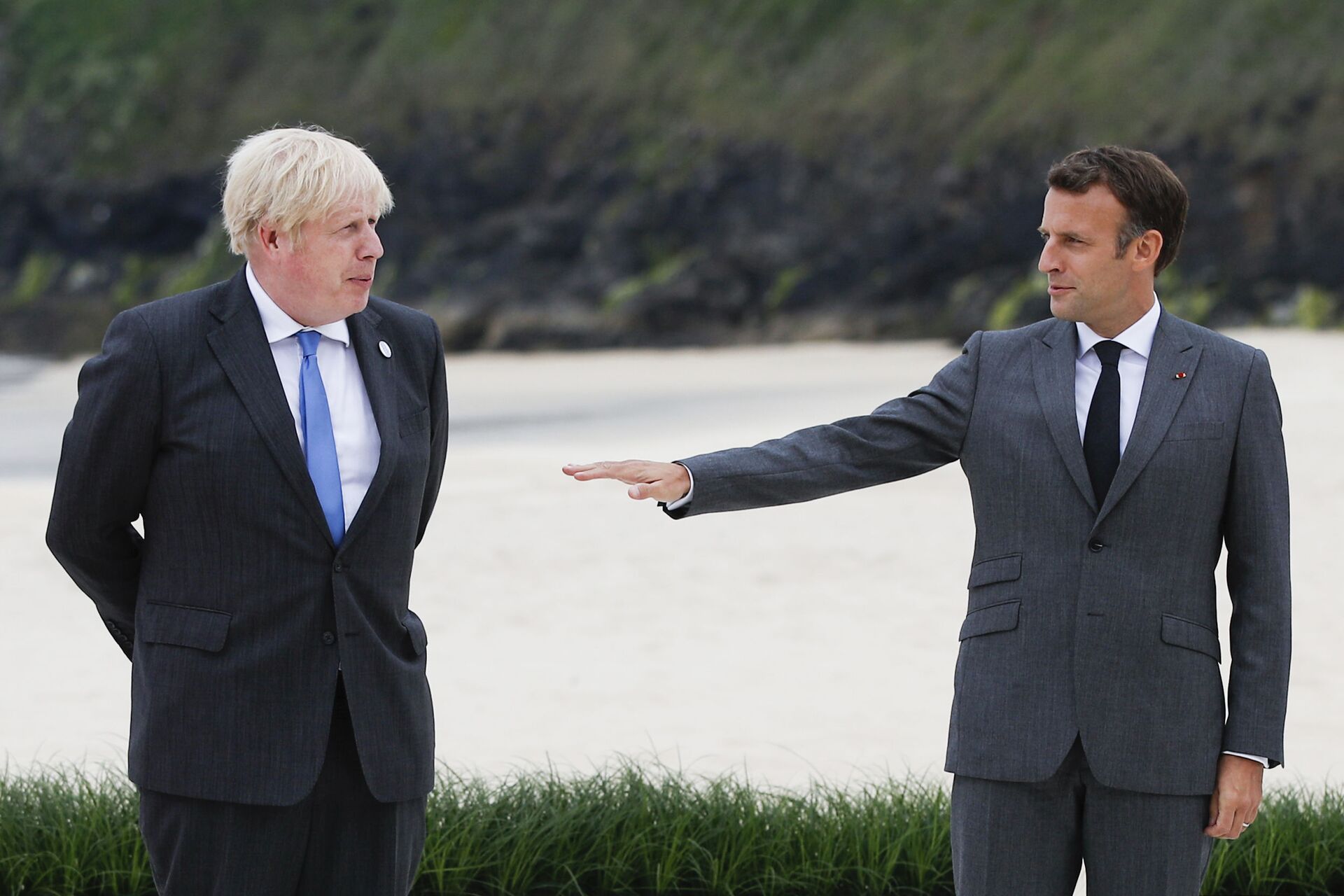 A UK government source told the The Telegraph, that Macron's statement was "highly revealing of the EU's position".

Speaking to reporters after negotiations with his French counterpart, a visibly irritated Johnson said Brussels should "get it into their heads" that Northern Ireland is part of the United Kingdom. Britain "will do whatever it takes" to protect its territorial integrity the prime minister said, noting that he hopes that London and Brussels will find "pragmatic solutions" to the ongoing row.

Following the buzz the remarks created, the Elysée Palace issued a statement, clarifying that the French president said "Toulouse and Paris were part of a single geographic area and that Northern Ireland was on an island". The Elysée Palace said Macron wanted to "highlight" that the situation was quite different and that it wasn't right to draw this kind of comparison.

"He reminded [Prime Minister Johnson] that the UK's exit from the EU was a British decision and that it was necessary to stick to the word given. The president then steered the conversation back to the key issues of the G7", reads the statement released by the Elysée Palace.

Brexit and The Troubles

In 2016, Britain voted to leave the European Union. Withdrawing from the bloc meant that the UK will no longer be part of its single market and customs union, which guarantee the free movement of goods, services, and labour between its member states. Thus, Brussels will treat Britain like its other non-EU trading partners, conducting checks on everything that crosses its borders.

The other side (Unionists) wanted Northern Ireland to remain part of UK. The conflict ended with the signing of the Good Friday Agreement, a peace treaty, which among other things, stipulated that the border between Northern Ireland and the Republic of Ireland should be almost non-existent – no border posts, no cameras. 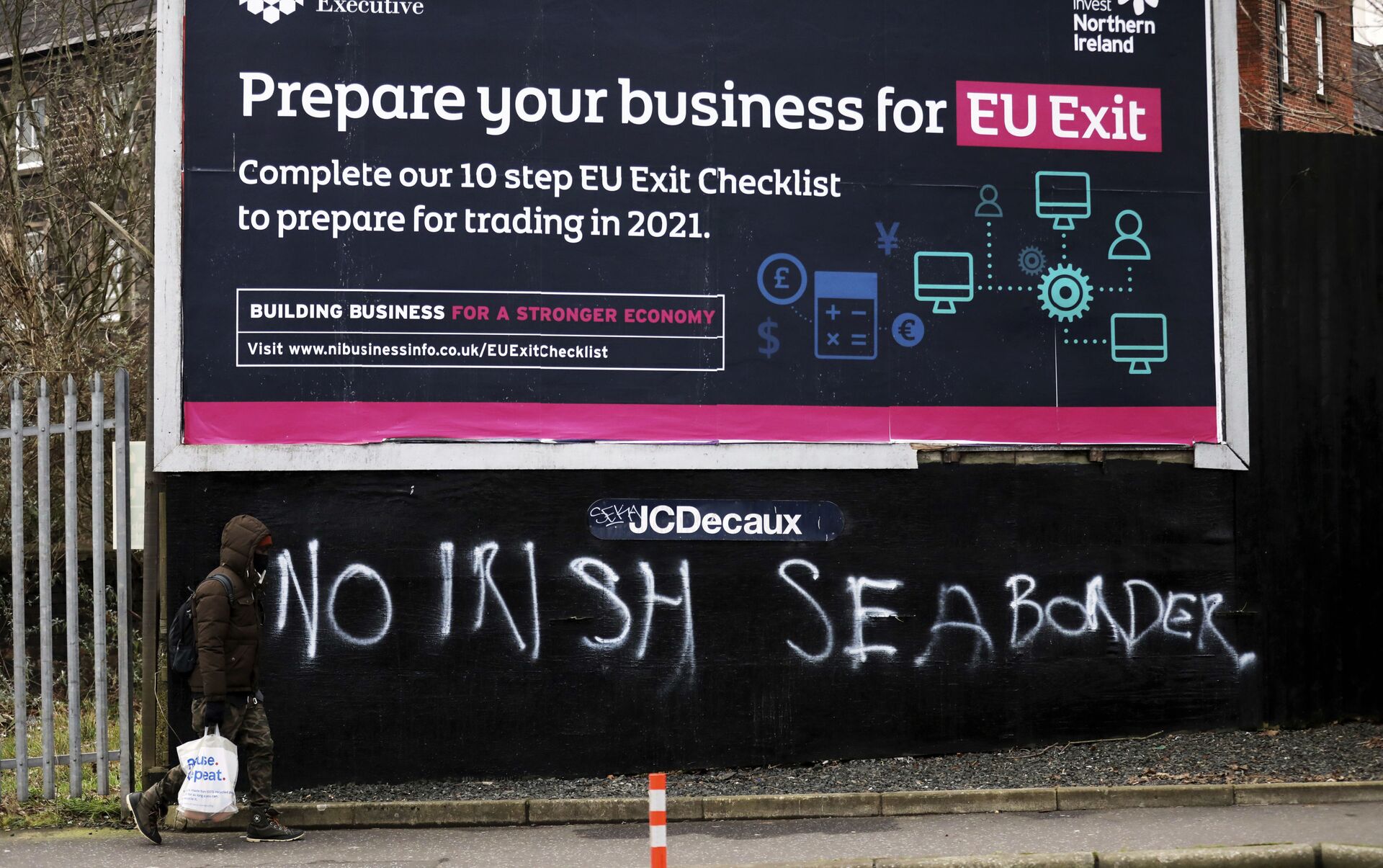 The deal, however, apparently only worked perfectly on paper. Since the UK officially left the EU there has been major supply disruptions due to checks across the Irish border. This led to tensions in Northern Ireland, with Unionists strongly opposing the NIP, which they say threatens Belfast's membership in the UK.

A six-month grace period has been in place since January. It temporarily suspends the rules of the NIP. Hence, as of now deliveries of sausages and other chilled meat to Northern Ireland (de-facto an EU member) and the rest of the bloc are allowed, but at the beginning of July they will be banned as Brussels only allows frozen meat to enter its single market.

London has repeatedly asked the European Union to renegotiate the Northern Ireland Protocol. Brussels is strongly opposed to this idea. Many in the bloc feel that the UK is simply reneging on its vows. Prior to the G7 meeting in Cornwall, French President Emmanuel Macron said Britain's proposal was not "serious".

"We have a protocol, an agreement of separation, in the framework of which is Northern Ireland and a trade treaty. It was painstakingly discussed for years and discussed, I remind you, at the initiative of the British who wanted to leave, not the Europeans. If after six months you say we cannot respect what was negotiated, then that says nothing can be respected. I believe in the weight of a treaty; I believe in taking a serious approach. Nothing is negotiable; everything is applicable", said the French president.

UK Prime Minister Boris Johnson threatened to use Article 16 of the NIP, which allows both London and Brussels to suspend the measure if it causes "economic, societal, or environmental difficulties". The European Union, in turn, said that patience is running thin in Brussels and hinted that should London terminate the NIP it will start a trade war, with the bloc imposing tariffs and quotas on UK exports.