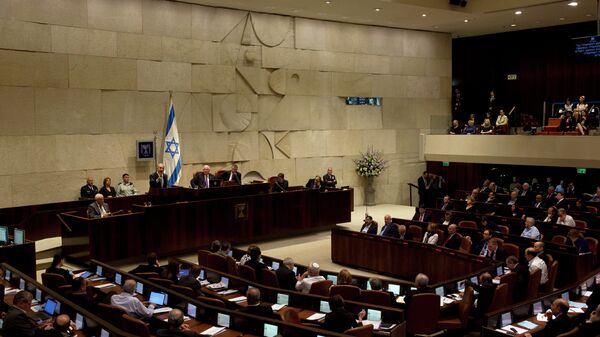 Subscribe
International
India
Africa
If approved by the Israeli parliament, the new coalition government will be inaugurated later in the day, which could terminate Benjamin Netanyahu's lengthy 12-year term as the country's prime minister.

Sputnik is live from Jerusalem as the Knesset is voting on a new coalition government, composed of eight parties.

If the legislative body votes in favour of the new government, it could pave the way for Naftali Bennett, the right-wing Yamina party's leader, to become the country's new prime minister before being replaced by the centrist Yesh Atid party's leader Yair Lapid after about two years, in accordance with a rotational basis.

Israel has been reeling from political instability stemming from a series of inconclusive elections over the course of the past two years. The latest - fourth - round of elections took place in March.

With 67 votes in the 120-member chamber, parliament named Mickey Levy, a member of the Knesset for Yesh Atid, its new speaker. He will succeed the current speaker, Yariv Levin, of Benjamin Netanyahu's Likud party.