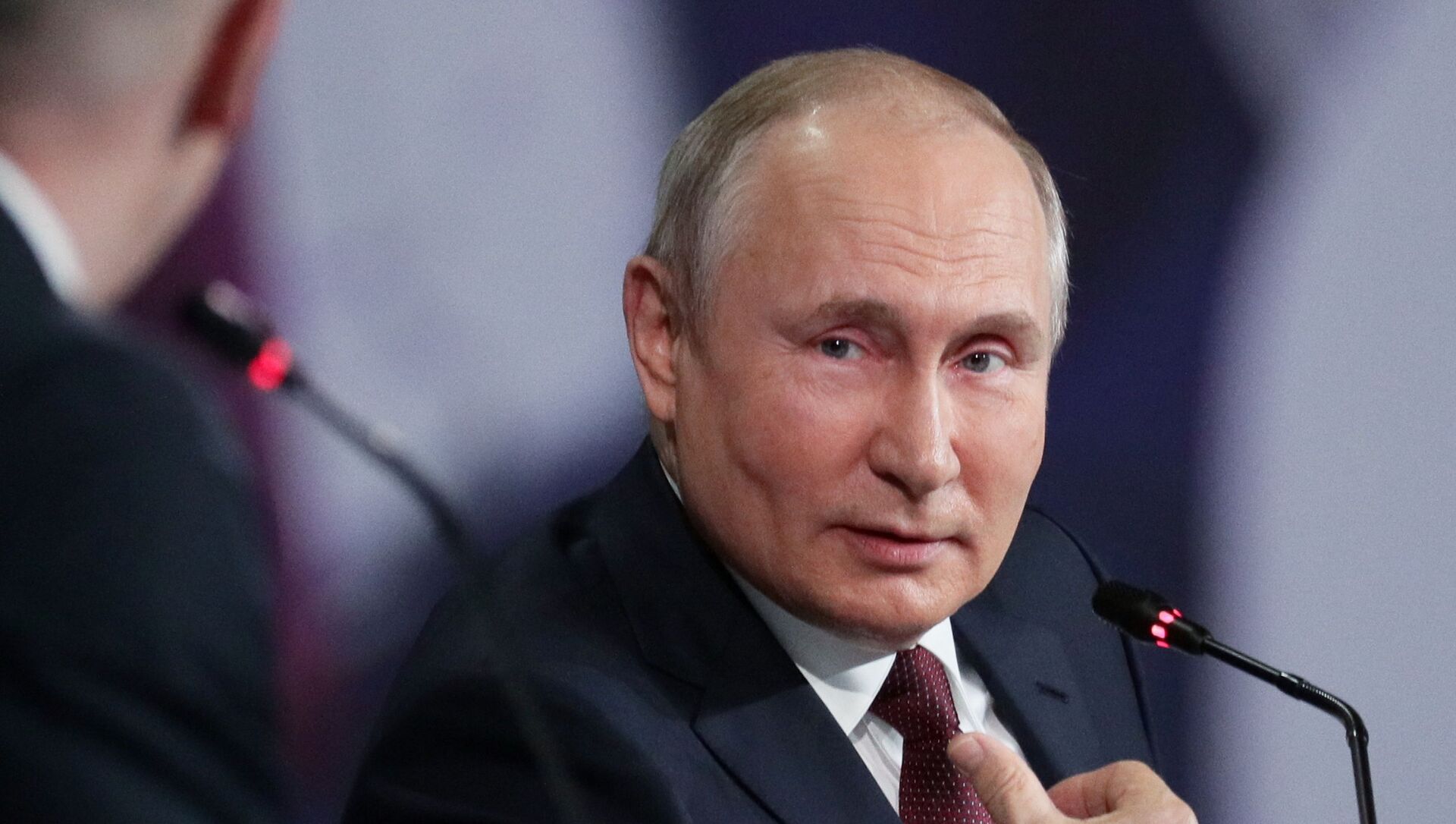 Morgan Artyukhina
All materialsWrite to the author
Speaking to NBC News on Friday, Russian President Vladimir Putin said that relations between the United States and the Russian Federation had reached their nadir, but noted he is unworried about what he called the "Hollywood macho" of US President Joe Biden.

"Over my tenure, I've gotten used to attacks from all kinds of angles and from all kinds of areas under all kinds of pretext, and reasons and of different caliber and fierceness and none of it surprises me," Putin told NBC's Keir Simmons on Friday, speaking about Biden having calling him a "killer."

He added that "as far as harsh rhetoric, I think that this is an expression of overall US culture," calling it an example of "Hollywood macho."

"I have heard dozens of such accusations, especially during the period of some great events, during our counterterrorism efforts in North Caucasus. And when that happens I am always guided by the interests of the Russian people, of the Russian state," Putin said.

"Sentiments in terms who calls somebody whom, what kind of labels that is not something I am worried about in the least," he added.

Putin and Biden are due to have their first in-person summit on June 16 in Geneva, Switzerland, to "discuss the full range of pressing issues, as we seek to restore predictability and stability to the US-Russia relationship," as the White House put it last month.

The Kremlin described the agenda a bit differently, stating that "We intend to discuss the state and prospects of further development of Russian-American relations, problems of strategic stability, as well as topical issues on the international agenda, including interaction in the fight against the coronavirus pandemic and the settlement of regional conflicts."

Before then, however, Biden is meeting with the Group of Seven (G7) nations - from which Russia has been excluded since 2014 - as well as with other members of the NATO alliance.

"I'm headed to the G7, then to the NATO ministerial and then to meet with Mr. Putin to let him know what I want him to know," Biden said Friday, speaking at RAF Mildenhall airfield in Suffolk, England.

Trump is a 'Talented Individual'

Putin told NBC that US-Russian relations had reached their lowest point in recent years, and while he didn't say it was because of Biden, a Democrat, succeeding Republican Donald Trump as president, he did contrast the two American leaders.

"I believe that former US president Mr. Trump is an extraordinary individual, talented individual, otherwise he would not have become US President," Putin said of the former US head of state, who left office in January after losing a re-election attempt to Biden. "He is a colorful individual. You may like him or not. And, but he didn't come from the US establishment, he had not been part of big time politics before, and some like it some don’t like it but that is a fact."

He described Biden as a "career man," noting he was radically different from Trump not because of his political persuasion, but because "He has spent virtually his entire adulthood in politics."

"That's a different kind of person, and it is my great hope that yes, there are some advantages, some disadvantages, but there will not be any impulse-based movements, on behalf of the sitting US president," he added.

The Russian president also dismissed a report in Thursday's Washington Post claiming Moscow is preparing to deliver an advanced spy satellite to Iran.

"We have cooperation plans with Iran, including the military and technical cooperation," Putin said. "It’s just fake news. At the very least, I don’t know anything about this kind of thing, those who are speaking about it probably will maybe know more about it. It’s just nonsense, garbage.”

According to the report, which is based on "current and former US and Middle Eastern officials briefed on details of the arrangement" who "spoke on the condition of anonymity, citing sensitivities surrounding ongoing intelligence collection efforts," the Russian government is preparing to give Tehran a Kanopus-V or Kanopus-B satellite, a civilian high-resolution imaging satellite.

Interestingly, when asked about the report, the US State Department replied simply that it was "aware of it" and refused to speak even of hypothetical responses to it.

According to NBC, the full interview will be aired on Monday evening.