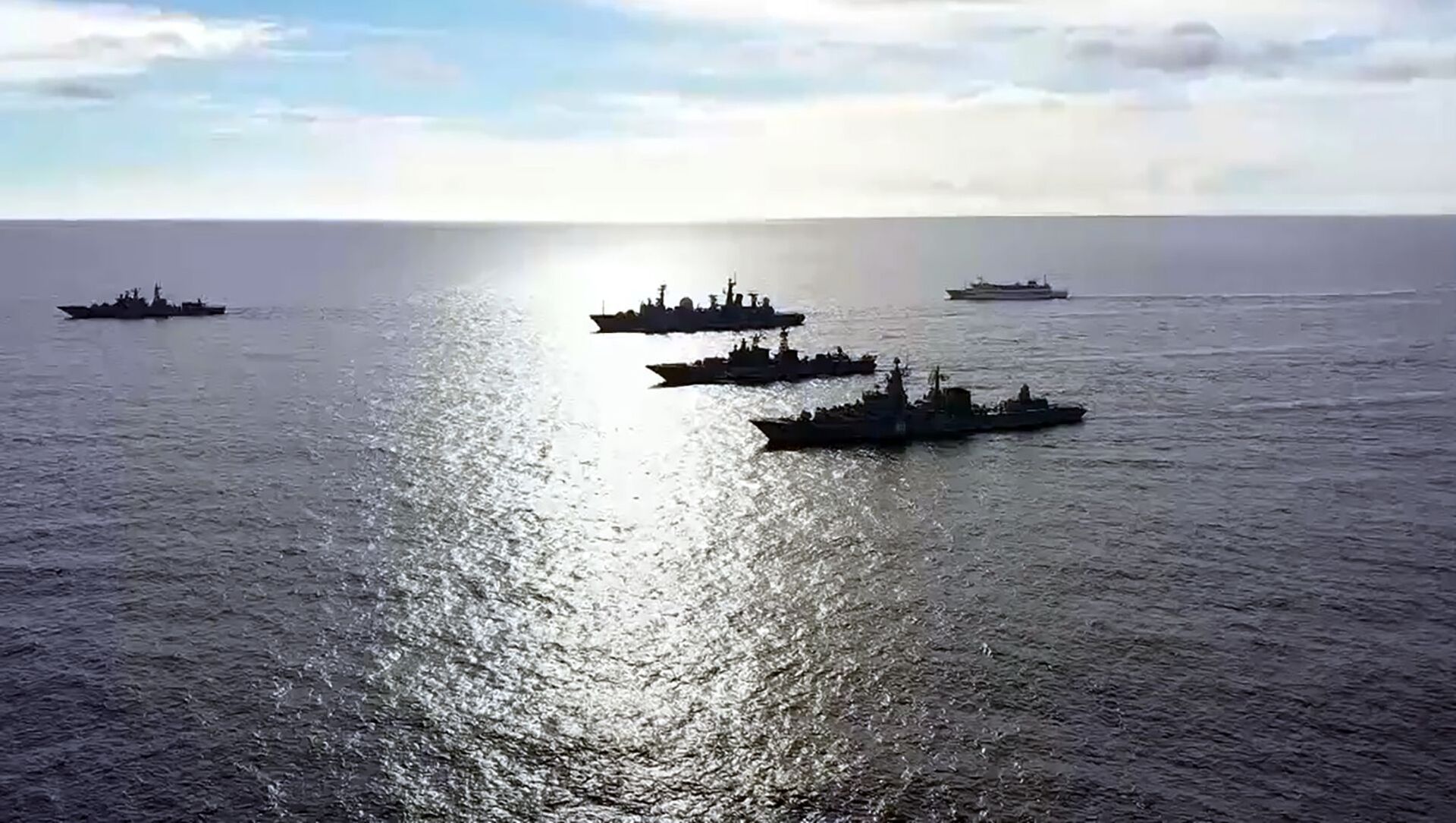 Ilya Tsukanov
All materialsWrite to the author
Earlier in the day, a Russian fighter jet intercepted a US spy plane operating near the state border in the Russian Far East.

The Defence Ministry says the maneuvers are taking place in the central Pacific, and include exercises on the management of a heterogeneous group of forces at a considerable distances from their home bases, the defence of sea communications, and the organization of the interaction of ships and aircraft to search for and track submarines and ship groupings of a simulated enemy.

The drills saw ships sailing roughly 4,000 km from their bases and home operating areas, and include the fleet’s flagship Varyag missile cruiser, the large anti-submarine ship Admiral Panteleev, and the frigate Marshal Shaposhnikov. The Gromky, Sovershenny and Hero of the Russian Federation Aldar Tsydenzhapov –Stereguschiy-class corvettes, are also taking part, along with several logistics support vessels and the Marshal Krylov missile tracking ship. About 20 aircraft, including Tu-142MZ anti-submarine warfare bombers and MiG-31BM interceptors are also involved.

An operational exercise of the heterogeneous forces of the Pacific Fleet is being conducted in the central Pacific https://t.co/FMrpRKTqM1#Pacificfleet pic.twitter.com/e9vD6QwzE2

The drills are being commanded by Admiral Sergei Avakyants, the veteran commander of the Russian Pacific Fleet.

Earlier Thursday, Russia’s Eastern Military District reported that a Su-35 fighter identified and escorted a US Air Force RC-135 strategic reconnaissance plane over the Pacific Ocean operating near Russia’s state borders. US aircraft regularly test Russia’s air defences in the Far East, as well as the Baltic, Black and Barents Seas, by flying spy planes, reconnaissance drones and bombers near the border.

World
Moscow Says Stationing of US Missiles in Asia-Pacific Would Destabilise Region, Promises Response
The Pacific drills come amid an escalation of tensions in the Asia-Pacific region between the US and Russia’s Chinese partners, which include threats by Washington to station medium-range ground-based missiles in the region following the US withdrawal from the Intermediate-Range Nuclear Forces Treaty in 2019, which barred the creation and deployment of ground-based missiles in the 500-5,500 km range. Earlier this year, Moscow warned that the deployment such weapons in the region would escalate tensions and “undoubtedly” provoke a response by the Russian side.
Newsfeed
0
Access to the chat has been blocked for violating the rules . You will be able to participate again through:∞. If you do not agree with the blocking, please use the feedback form
The discussion is closed. You can participate in the discussion within 24 hours after the publication of the article.
To participate in the discussion
log in or register
loader
Chats
Заголовок открываемого материала