'I Keep Forgetting': Watch Biden Confess to Being Oblivious to His Presidential Status 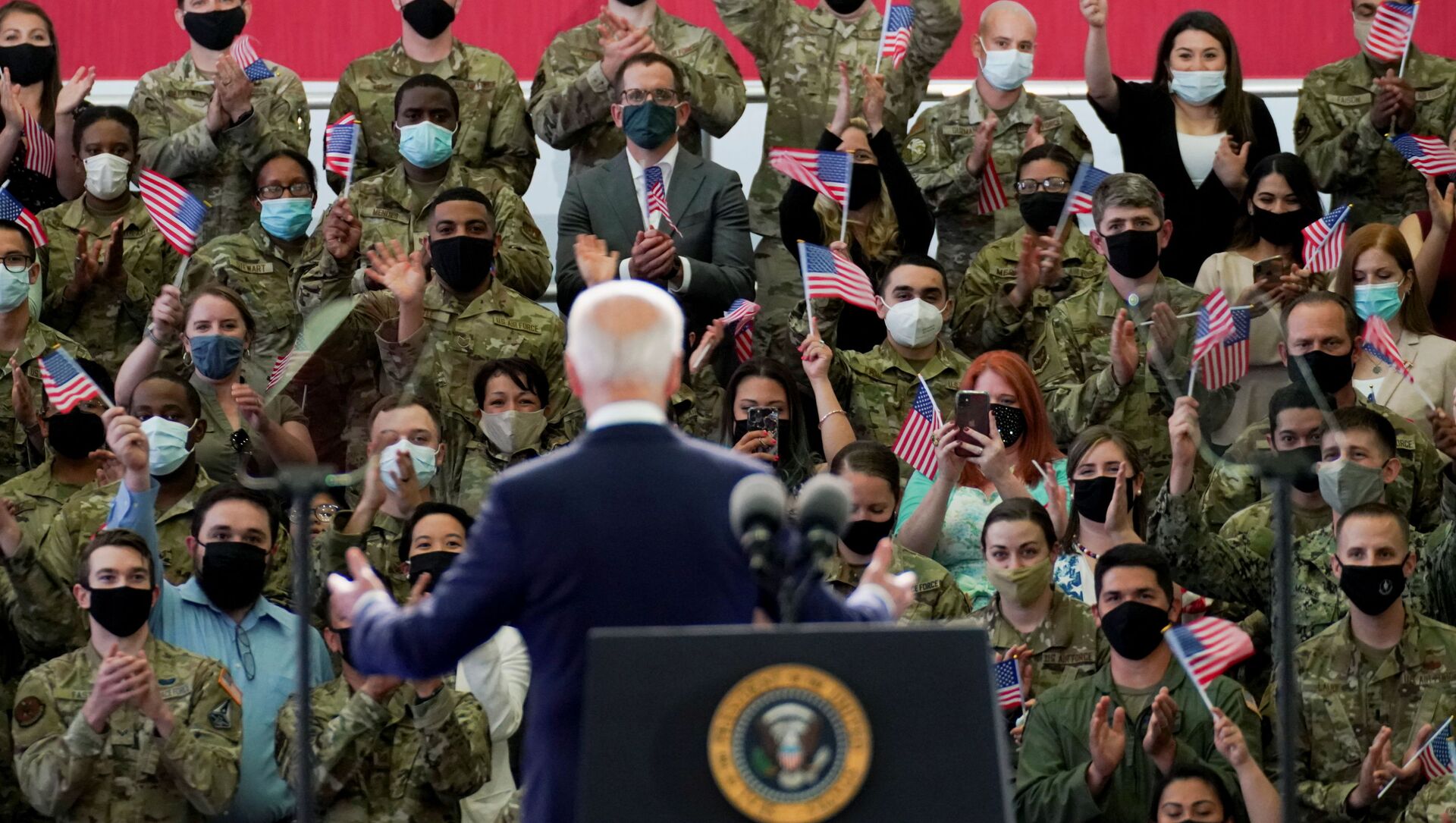 Kirill Kurevlev
Managing Editor
All materialsWrite to the author
The current US president is famous for his frequent off-the-cuff remarks, which have been known as "Bidenisms" from his tenure as the vice president, and that approach has made him possibly one of the most quotable figures in Washington.

US President Joe Biden delivered a rather awkward joke to a crowd of US military members stationed in the UK at a Royal Air Force installation in England on Wednesday, saying that he keeps forgetting that he is actually the commander-in-chief.

After dashing onto the stage, Biden thanked the teenager who introduced him and began his statement with the words "When I was 14..." before becoming distracted by the audience, which was still standing at attention, as the US president had forgotten to tell them "at ease" before beginning his remarks.

"At ease," he finally said, gesturing for the vast crowd to return to their seats before joking, "I keep forgetting I'm president."

​The crowd chuckled in response to the remark of the 78-year-old president, as he went on to mention that he had a stutter when he was 14 and commended the fortitude of the young girl who introduced him.

And soon Biden continued by referring to the Royal Air Force as the RFA in another gaffe.

"These partnerships have hardened and have been hardened in the fire of war and generations of Americans and service members who fought them. Like those RFA pilots," he said.

It occurred after First Lady Jill Biden jested that her husband needed to concentrate.

Biden arrived in the UK on Wednesday for his first international trip as president, which includes a meeting with Queen Elizabeth II and participation in the G7 summit. Describing the aims of his eight-day trip, Biden said that as the world recovers from the coronavirus outbreak, the "democracies across the world are standing together to tackle the toughest challenges and the issues that matter most to our future."

Prior to the three-day G7 meeting, Biden is expected to meet with UK Prime Minister Boris Johnson on Thursday to announce a new Atlantic Accord, according to reports.

Biden also mentioned to the audience at the airbase that he will have a face-to-face conversation with his Russian counterpart Vladimir Putin, which is scheduled for June 16 in Geneva, Switzerland.

"[I will] meet with Mr. Putin to let him know what I want him to know," Biden said without specifying the exact issues to be discussed. "We're not seeking conflict with Russia."