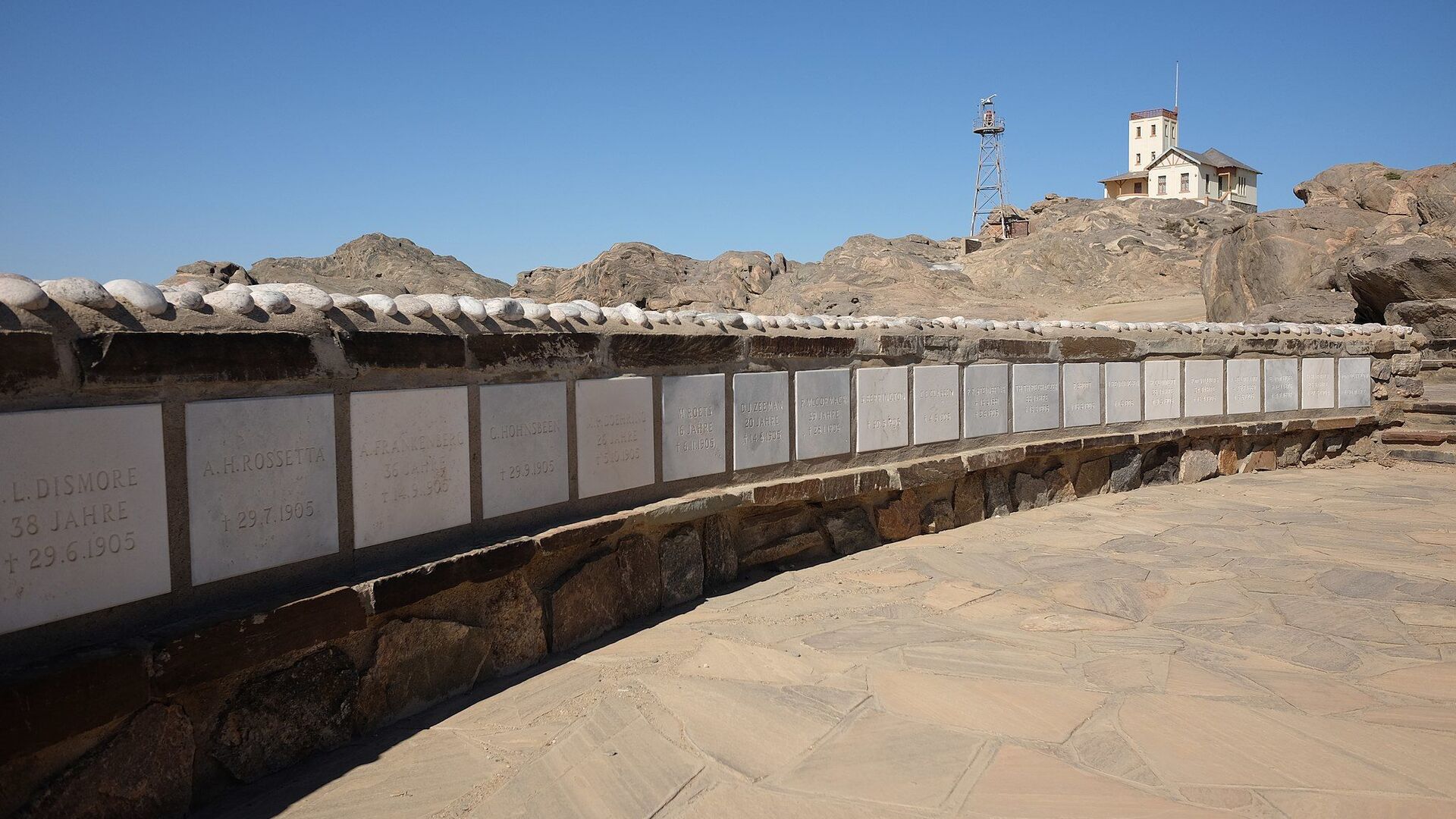 © Johan Jönsson; Wikimedia Commons
Subscribe
International
India
Africa
Morgan Artyukhina
All materialsWrite to the author
Opposition lawmakers in Windhoek are furious over a deal reached between the Namibian and German governments that will lead to Berlin apologizing for its genocide in Namibia, saying the deal did not include representatives from the targeted Herero and Nama peoples and that the payments agreed to in the deal will not reach them.

“They have excluded communities, groups of Namibians … that is apartheid that government has practised,” Rep. Edson Isaacks, from the opposition Landless People’s Movement Namibia (LPM) party, thundered in the National Assembly on Tuesday, calling the deal a “substandard agreement.”

“You have betrayed us,” Utaara Mootu, another LPM lawmaker, told Prime Minister Saara Kuugongelwa-Amadhila. “You have not allowed for equal participation based on human rights policies. You have not given us the chance to narrate the economic trauma” caused by the genocide, she said, according to Al Jazeera.

Kuugongelwa-Amadhila’s government reached a reconciliation deal last month, the product of six years of negotiations, in which the German government will admit that it carried out a genocide in Namibia while the country was a German colony in the early 20th century, and will pay out a $1.22 billion settlement over the next 30 years, amounting to $40.67 million per year.

However, the deal has not been approved by either parliament, and will also require each prime minister’s signature.

The Herero and Nama peoples were targeted for extermination by German colonial officials in what was then called German South-West Africa after they rose up in rebellion against encroachments on their traditional pasturing lands and plans to force them onto reservations.

German commander Lothar von Trotha, who was sent to crush the uprising, ordered in 1904 that “every Herero, with or without rifles, with or without cattle, will be shot,” giving a similar order for the Nama people the following year.

The tribes were driven off their lands and forced into the harsh Namib desert, and the German soldiers sealed off watering holes to stop them from returning. Those who didn’t perish in the desert were put into concentration camps to work as slave labor, where many more died. In all, roughly 80% of the 100,000-strong Herero people and 50% of the 10,000-strong Nama people had been killed by 1908.

After, von Trotha was decorated by German Kaiser Wilhelm II, supporting the belief that the monarch authorized or even ordered the genocide, although no such document has survived.

German colonial rule in Namibia began in 1884 as European powers divided up Africa among themselves and ended after World War I in 1919, when it was given to the Union of South Africa, then part of the British Empire. It then became a South African colony and was subjected to the same Apartheid white supremacist system as the rest of South Africa, but Pretoria faced a powerful insurgency by the South West Africa People's Organisation (SWAPO), who won Namibia’s independence in 1990 after South Africa’s invasion of Angola collapsed. White Apartheid rule in South Africa ended just four years later, in 1994.

However, the legacy of the colonial era persists in the distribution of wealth: although white descendants of German settlers and South African Boers account for just 6% of the Namibian population, together they hold roughly 80% of the country’s wealth, including 72% of all agricultural land, much of which was seized during the genocides of the Herero and Nama peoples.

Nama, Ovaherero Say They ‘Did Not Participate’ in Deal

SWAPO has been the ruling party ever since, but because it is composed chiefly of people from the majority Ovambo tribe and the opposition National Unity Democratic Organisation (NUDO), whose base is strongly Ovaherero, was not included in the talks, many feel the deal is being imposed on the Ovaherero.

“We will not be a party to any signatory for things that we did not participate in,” NUDO leader Josef Kauandenge said Tuesday. “That agreement can be signed between the German and the Namibian government, but the vast majority of Nama and Ovaherero people will reject it with the contempt it deserves.”

The Council of Chiefs, a body representing the Ovaherero and Nama people, has also called for renegotiation of the agreement, particularly to increase the financial payments.

Kuugongelwa-Amadhila has insisted both tribes were “fully consulted during the negotiations.”

However, the deal has also been criticized from inside her government. Namibian Vice President Nangolo Mbumba said last week the $1.22 billion was “not enough.”

"No amount of money in any currency can truly compensate for the life of a human being," Mbumba told reporters on June 4. "We need to recognise that the amount of €1.1 billion agreed upon between the two governments is not enough and does not adequately address the initial quantum of reparations initially submitted to the German Government."

According to the German Foreign Ministry, those funds will be used on energy, water, education and vocational training projects where large populations of Hereros and Namas live, who would play a key role in deciding what the funds are to be used for.

Laidlaw Peringanda, chairperson of the Namibian Genocide Association, told Al Jazeera last week they were worried “that the social projects proposed by the German government won’t actually benefit us. If they are not including us in the negotiations, how will they suddenly involve us when it comes to these projects?”

“We have lost our ancestral land. A lot of us, of our community, live in poverty today. Some of us live in shacks and have to go without eating for a week. A lot of us inherited transgenerational trauma,” he added.

German President Frank-Walter Steinmeier is set to travel to Windhoek later this year to issue the apology before the National Assembly, but Herero chief Vikuii Reinhard Rukoro has promised mass protests if he comes, according to the Frankfurter Allgemeine. 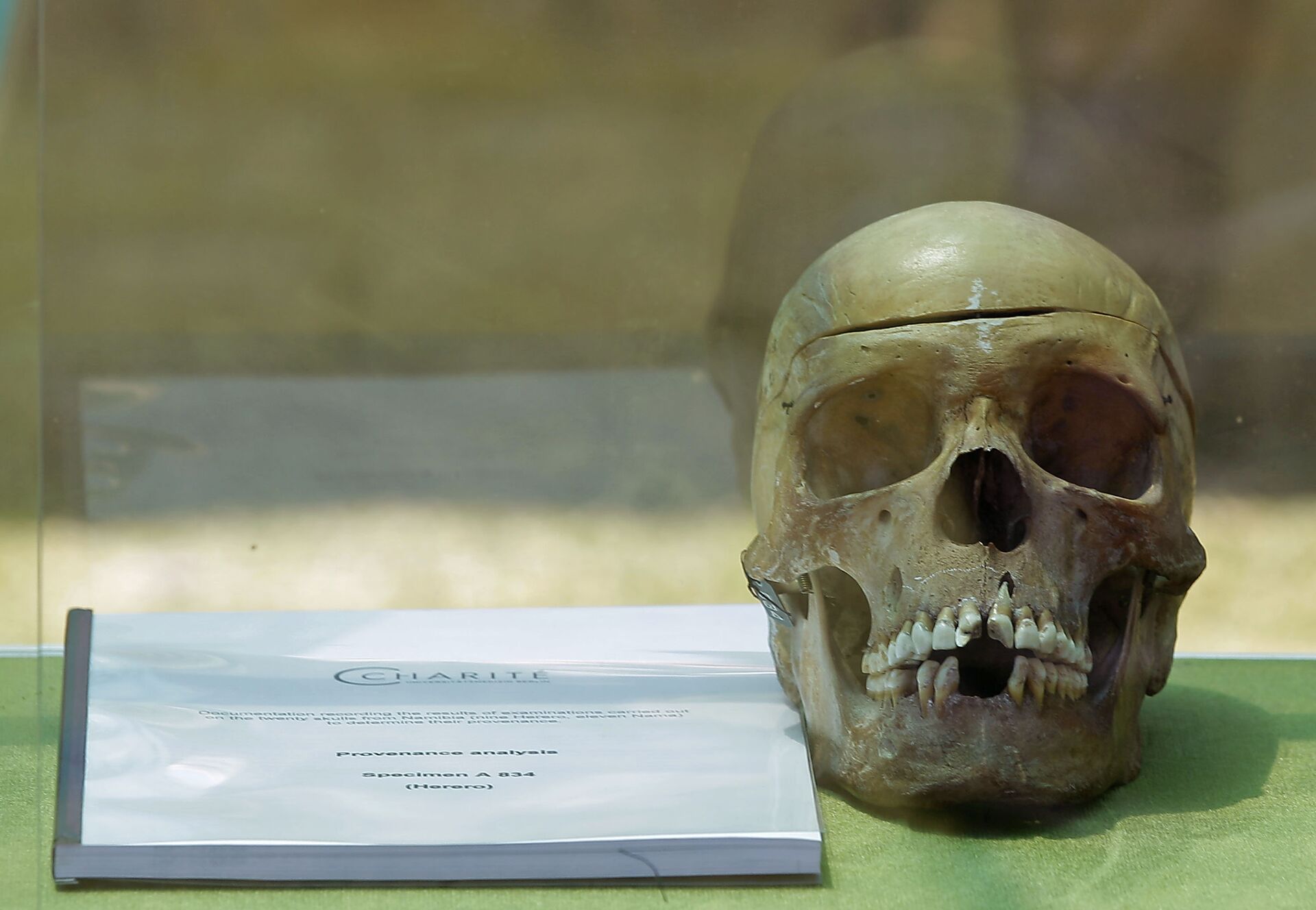 A skull from Germany on display in the city of Windhoek, Namibia, Tuesday, Oct 4, 2011. Hundreds of Namibians welcomed home the skulls of ancestors taken to Germany for racist experiments more than a century ago. The skulls are "testimony to the horrors of colonialism and German cruelty against our people," Prime Minister Nahas Angula said at an airport ceremony, "The Namibian nation accepts these mortal remains as a symbolic closure of a tragic chapter."
© AP Photo

Rukoro said he would “expose Germany … to the embarrassment that they signed an agreement on the genocide of Hereros and Namas, which was ratified by a parliament made up of SWAPO people and Ovambos who know nothing about the genocide.”

He also said the deal is “nothing but a construct of a racist mindset on the part of Germany and neocolonial subservience on the part of Namibia.” Notably, the payments are being called a settlement, not reparations, since doing so would be an acknowledgement of guilt under the 1948 United Nations Convention on Genocide, and Berlin maintains the statute cannot be retroactively applied to past events.

Sima Luipert, a descendant of Nama victims of the genocide, who lives on a reservation in southern Namibia, told the New York Times that Steinmeier “might as well stay in Germany. We are not going to accept his apology as long as he doesn’t see us as human beings, as long as he doesn’t come down to our leaders and apologize.”