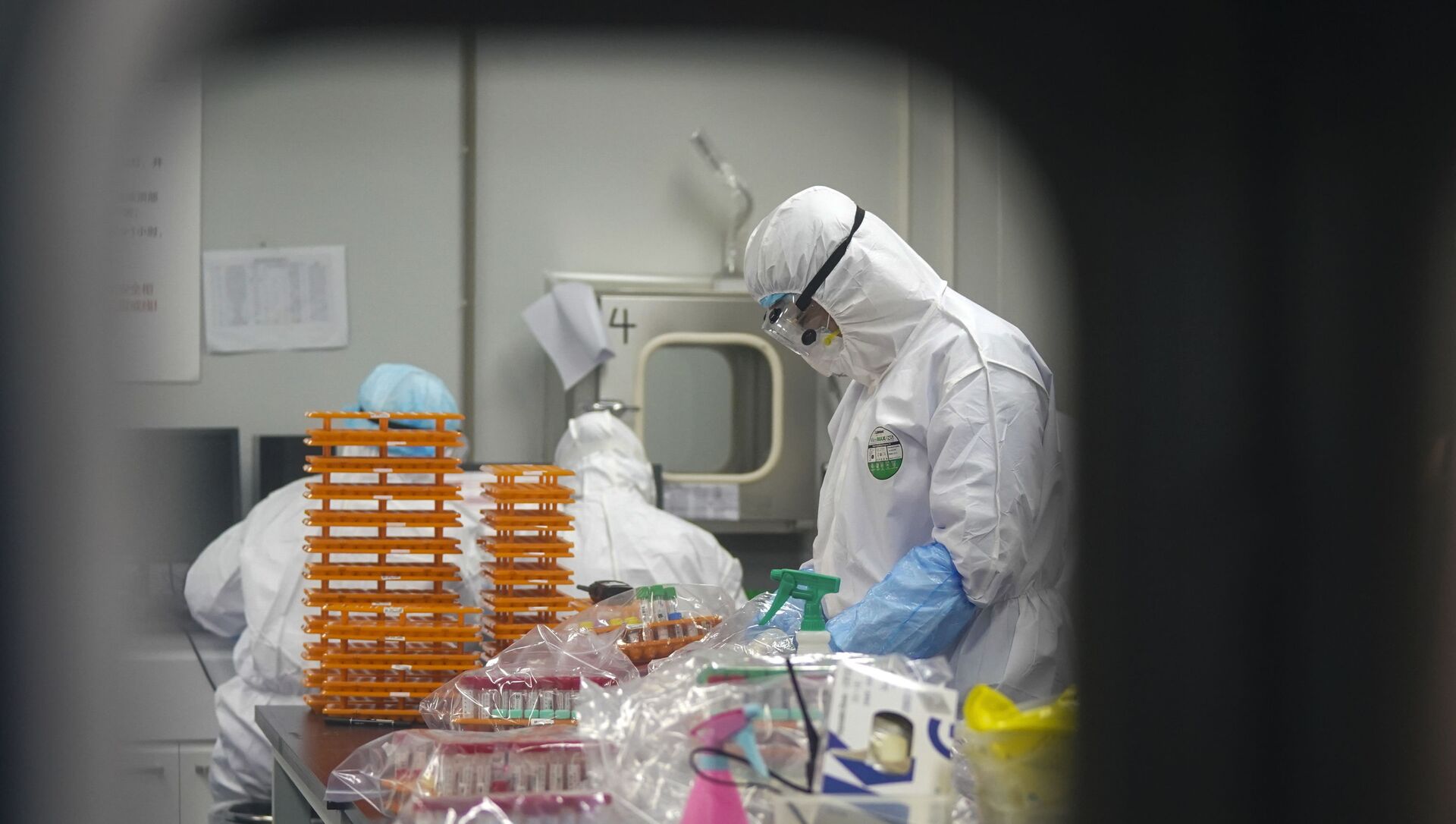 © AP Photo / Cheng Min
Subscribe
Ilya Tsukanov
All materialsWrite to the author
The COVID-19 ‘manmade virus’ theory first surfaced in early 2020, when the US accused China of engaging in dangerous research involving coronaviruses. The claims were temporarily muted after it emerged that US was involved in funding research at the Wuhan lab where the virus leak allegedly took place. The claims reemerged with new force last week.

SARS-CoV-2’s genetic sequencing almost certainly demonstrates that it is an artificially-manipulated virus developed in a laboratory, Steven Quay and Richard Muller, a pair of scientists investigating the coronavirus, have concluded.

In an op-ed for the Wall Street Journal published Sunday, Quay, who briefed Congress on the virus’s origins early last year, and who published a 193-page study in January suggesting the virus was “laboratory derived,” joined Muller, a physics professor at University of California’s Berkeley, to once again tout the lab leak theory.

In the article, the scientists suggested that “the most compelling reason” to support the lab leak theory wasn’t related to the circumstantial evidence about Chinese experiments in coronavirus gain of function research, alleged illnesses among lab workers at the Wuhan Institute of Virology or US intelligence reports, but because SARS-Cov-2’s “genetic footprint…has never been observed in a natural coronavirus”.

Specifically, the scientists alleged, SARS-Cov-2’s genome – or “blueprint for the factory of a cell to make proteins”, appears to have been artificially “supercharged” for gain-of-function research, splicing genes to create a rare genetic pattern never found in nature.

“In fact, in the entire class of coronavirus that includes CoV-2, the CGG-CGG [gene] combination has never been found naturally. That means the common method of viruses picking up new skills, called recombination, cannot operate here. A virus simply cannot pick up a sequence from another virus if that sequence isn’t present in any other virus,” Quay and Muller stated.

At the same time, they suggested, while “the double CGC is suppressed naturally”, that isn’t the case with lab work, where a double CGG combination serves as “the insertion sequence of choice…because it is readily available and convenient, and scientists have a great deal of experience inserting it”.

The scientists went on to suggest that there was “additional scientific evidence” pointing to SARS-CoV-2’s artificial, manmade origin – specifically the alleged “dramatic differences in the genetic diversity of CoV-2, compared with the coronaviruses responsible for SARS and MERS. Those viruses, they said, rapidly evolved as they spread among humans. SARS-CoV-2, on the other hand, appeared to have “already adapted into an extremely contagious version” once it began to spread among people – “precisely what is done in gain-of-function research”.

The Trump administration first began accusing China of engaging in dangerous coronavirus research at the Wuhan Institute of Virology in the spring of 2020, citing what it claimed was scientific data and intelligence reports that the global pandemic was the result of a leak at the Wuhan lab. China shot back, suggesting that the United States may have deliberately spread the coronavirus in Wuhan during the 2019 Military World Games.

Mutual recriminations were then muted –partially with the help of senior US health officials, including Trump coronavirus czar Anthony Fauci, who insisted that all available evidence suggested that the virus occurred naturally. Later, media investigations showed that US, Canadian, and Australian scientists and academic institutions collaborated heavily in bat coronavirus experiments in Wuhan, and contributed millions of dollars in grant money to the Chinese lab for such research.

Fauci Reportedly Briefed Health Leaders in 2020 of Potential 'Lab Leak' of 'Unusual' COVID Strain
The manmade virus claims reemerged again in March 2021, as the US and its allies again began accusing Beijing of pressuring investigators in a World Health Organisation team’s fact-finding trip to Wuhan. The WHO investigators dismissed the claims, and urged critics to actually read their report, which presented four distinct possibilities on how the pandemic may have begun.

Investigations of a possible US role in causing the global pandemic reemerged again last week after a massive trove of emails revealed that Dr. Fauci publicly downplayed manmade virus claims while privately admitting it to be a possibility, and personally approved hundreds of thousands of dollars in National Institute of Health funding to the Wuhan lab for coronavirus gain of function research before the pandemic.

Fauci has denied any wrongdoing, suggesting that funding he approved was just a drop in the bucket among the billions of dollars-worth of experiments being carried out at the Wuhan Institute of Virology.

Live Updates: India Confirms 3,380 New Deaths From Coronavirus
Chinese authorities have continued to forcefully deny the lab leak theory as well, pointing out that Michael R Gordon, the Wall Street Journal journalist who recently reported on Wuhan scientists falling ill in 2019, was the same contributor who fabricated lies about Iraq’s ‘weapons of mass destruction’ in the lead up to the Iraq War in 2003.

The stakes in finding out who or what caused the global coronavirus pandemic could not be higher. In the 15 months that the health emergency has been around, over 3.7 million people have died of complications from the illness, over 173 million more have been infected, and economies the world over have been decimated by the consequences of lockdowns and other precautions taken to try to combat the virus’s spread.

000000
Popular comments
The opening paragraph explains quite well the purpose of this israeloamerican propaganda article. It is to smear China. Thumbs down for promoting the propaganda of Russia's enemies.
vot tak
7 June, 14:36 GMT2
000000
Ban biolabs. Create an international treaty with the support of tens of countries against biolabs and any funding. Individuals working for biolabs can be restricted and sanctioned and possibly arrested for crimes against the humankind.