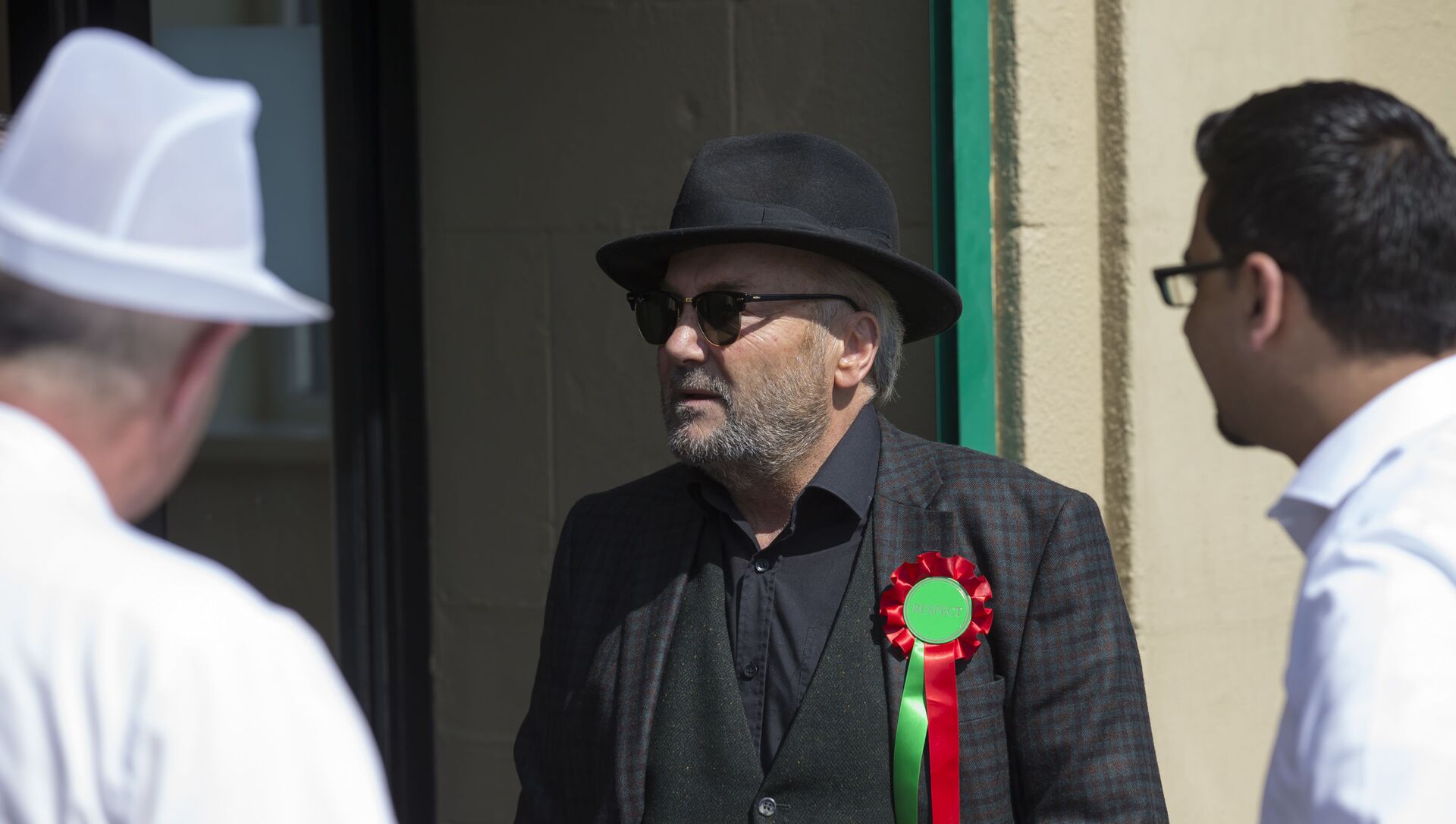 © REUTERS / Jon Super
Subscribe
Bookmakers have Conservative candidate Ryan Stephenson as odds-on favourite to beat Labour's choice Kim Leadbeater on 1 July, in a possible repeat of the 6 May shock Tory win in the north-eastern Hartlepool seat.

Labour is in "trouble" in the latest parliamentary by-election, but party members have been warned not to talk about it for fear of being dubbed defeatist.

Grass-roots Labour activist Crispin Flintoff, organiser of the Stand Up for Labour fundraising comedy shows, told an online audience of some 400 people he had been warned by fellow party members that the left would be blamed for defeat in Batley and Spen if they even discussed problems with Labour’s campaign there.

Broadcaster and political veteran George Galloway, who is standing for his recently-formed Workers' Party in the West Yorkshire seat, tweeted a clip of Flintoff's Sunday morning Not the Andrew Marr Show webcast.

Flintoff said he had tried to contact at least 15 party members in the constituency, but "none of them want to speak about what's happening in Batley and Spen. There seems to have been a silencing on the whole issue of the by-election and what's happening".

But Flintoff said "one or two" local party campaigners had told him off the record that "it doesn't seem that Labour's doing particularly well up there, and I expect that there may well be trouble for Labour."

"I've been told in a kind of warning that if people on the Left are seen to disrupt the campaign, then we may well be blamed for any defeat that happens", Flintoff revealed.

Will Batley be Starmer’s Waterloo? Looming By-Election in Town Where Muslims Threatened Teacher
Bookmakers currently have Conservative candidate Ryan Stephenson as odds-on favourite to beat Labour's choice Kim Leadbeater on 1 July, in what could be a repeat of the 6 May shock Tory win in the north-eastern Hartlepool seat that Labour had held since the 1960s.

Leadbeater is the sister of former constituency MP Jo Cox, who was murdered in 2016 by a right-wing extremist during the campaign for the referendum on European Union membership. She had only joined Labour weeks before she was "parachuted in", despite party rules stating prospective candidates must be members for at least a year beforehand.

​The Tories now stand to gain from local man Paul Halloran’s decision after talks with libertarian Reclaim Party leader Laurence Fox not to stand in the election so as not to split the vote against Labour. Halloran won over 12 percent of the vote there in the 2019 general election.

“It has been made clear to both of us that many people in Batley and Spen are fed up with the Labour Party", Fox said in a joint statement with Halloran on Saturday. “The Labour Party have lost their way. We cannot in good conscience stand and risk splitting the vote and condemning Batley and Spen to any more years of Labour control".

​"I intend, alongside Laurence Fox and the Reclaim Party, to hold all the candidates to account over the next month and beyond", Halloran said, insisting he would be a voice for murdered local man Bradley Gledhill and the unnamed Batley Grammar School teacher recently sacked for allegedly using cartoons of the Prophet Muhammad in a lesson.

Workers' Party leader Galloway announced his candidacy in May with the express intention of trying to force Labour leader Sir Keir Starmer out of the top spot. Galloway, the former anti-war Respect Party MP for nearby Bradford West, could potentially strip a significant portion of the Muslim vote away from Labour.

000000
Popular comments
Would love to see George Galloway win. Never thought I would ever say that, till I started to listen to George Galloway and realised he is the only UK politician I actually respect.
anne00marie
7 June, 00:46 GMT4
000000
anne00marie, unfortunately not going to happen, but I completely agree about George Galloway, top bloke.
Medvezhonok
7 June, 01:15 GMT3
000000
Newsfeed
0
New firstOld first
loader
LIVE
Заголовок открываемого материала
Access to the chat has been blocked for violating the rules . You will be able to participate again through:∞. If you do not agree with the blocking, please use the feedback form
The discussion is closed. You can participate in the discussion within 24 hours after the publication of the article.
To participate in the discussion
log in or register
loader
Chats
Заголовок открываемого материала
Worldwide
InternationalEnglishEnglishMundoEspañolSpanish
Europe
DeutschlandDeutschGermanFranceFrançaisFrenchΕλλάδαΕλληνικάGreekItaliaItalianoItalianČeská republikaČeštinaCzechPolskaPolskiPolishСрбиjаСрпскиSerbianLatvijaLatviešuLatvianLietuvaLietuviųLithuanianMoldovaMoldoveneascăMoldavianБеларусьБеларускiBelarusian
Transcaucasia
ԱրմենիաՀայերենArmenianАҧсныАҧсышәалаAbkhazХуссар ИрыстонИронауОssetianსაქართველოქართულიGeorgianAzərbaycanАzərbaycancaAzerbaijani
Middle East
Sputnik عربيArabicArabicTürkiyeTürkçeTurkishSputnik ایرانPersianPersianSputnik افغانستانDariDari
Central Asia
ҚазақстанҚазақ тіліKazakhКыргызстанКыргызчаKyrgyzOʻzbekistonЎзбекчаUzbekТоҷикистонТоҷикӣTajik
East & Southeast Asia
Việt NamTiếng ViệtVietnamese日本日本語Japanese俄罗斯卫星通讯社中文（简体）Chinese (simplified)俄罗斯卫星通讯社中文（繁体）Chinese (traditional)
South America
BrasilPortuguêsPortuguese
NewsfeedBreaking
22:38 GMTAlternative for Germany to Continue Supporting Nord Stream 2 After Election - Co-Chairman
22:01 GMTMilitants in Aleppo Tried to Force Way From Turkish-Controlled Area - Russian Military
21:48 GMTGermans See No Use to Vote for CDU Without Merkel at Helm - Afd Politician
21:19 GMTGerman Conservatives Suffer Catastrophic Defeat in General Election – Senior Official
21:00 GMTGermany's FDP Leader Hints at Coalition Talks With Greens
20:45 GMTMacron Files Complaint Against Paparazzi for Invasion of Privacy - Reports
20:16 GMTTwitter Removes Blue Verified Badge From Accounts of Several Afghan Ministries - Reports
20:00 GMTLaschet, Scholz Want Coalition Talks to End by Christmas
19:41 GMTCIA Was Ready to Start Firefight in London to Prevent Russia From Busting Out Assange, Media Claims
19:20 GMTSuicide Pact? Top Labour Remainer Says Party Should Campaign to Rejoin EU
18:58 GMTVideo: Miss France 2019 Confronted by 'Teenage Gang' That Threw Stones at Her in Paris
18:47 GMTFree For All! Enraged Moped Drivers Fight in London Amid Lack of Fuel - Video
18:39 GMTPSG's Kylian Mbappe Caught on Camera 'Lamenting Neymar Would Not Give Him Passes'
18:35 GMTPowerful 5.7-Magnitude Earthquake Hits Philippines' Largest Island Luzon
18:00 GMTInfrastructure Plan: Pelosi Says She 'Never' Brings a Bill to Floor 'That Doesn't Have the Votes'
17:43 GMTUsyk vs. Fury? Gypsy King's Twitter Like Leaves Fans Buzzing About Possible Heavyweight Clash
16:50 GMTLabour Leader Demands Visas For 100K Foreign Lorry Drivers Amid Global Shortage
16:33 GMTLabour Staff Cuts That Prompted Strike Ballot Due to £2m-a-Year Legal Costs
16:23 GMTDHS Chief Reveals Up to 12,000 Haitians Who Crossed Southern Border Were Released Into US
16:21 GMTTurkey Wants US Military to Leave Syria, Iraq After Afghanistan Withdrawal, Erdogan Says