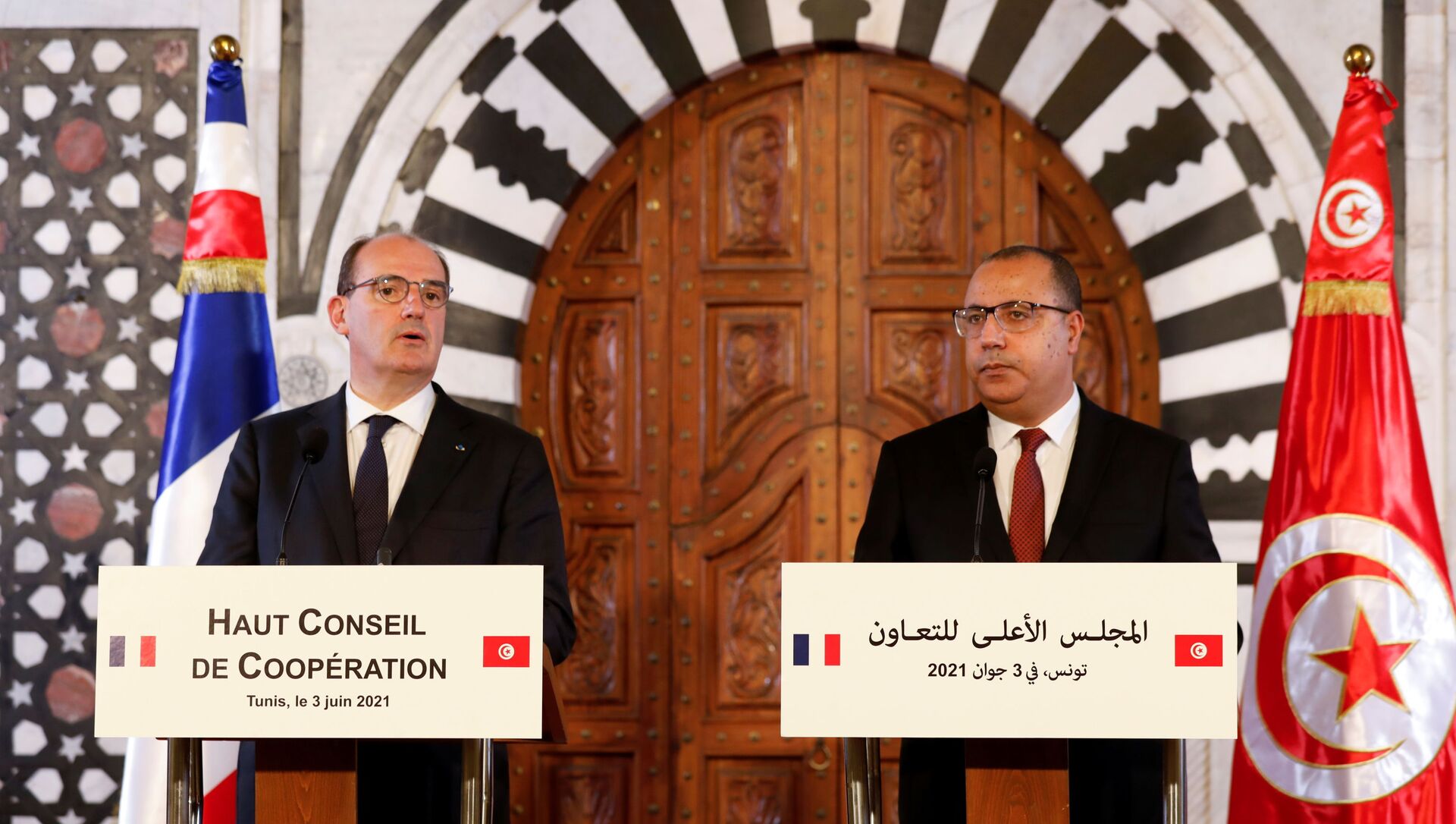 Morgan Artyukhina
All materialsWrite to the author
Despite the formal end of colonial rule decades ago, Paris retains close economic and military ties with many of its former subject nations, providing aid in exchange for investment opportunities. On Thursday, France paused its eight-year war against Islamist rebels in Mali and in April offered support to Chad amid death of its ruler, Idris Deby.

In Tunis on Thursday, French Prime Minister Jean Castex pledged economic and medical help for Tunisia, which is struggling to patch holes in its national budget amid deep debt and a COVID-19 outbreak that is pushing its health system to the limit.

Castex told Prime Minister Hichem Mechichi France was prepared to help Tunisia, a former colony, with neoliberal-style economic reforms necessary for the country to get another loan from the International Monetary Fund (IMF).

"These reforms are important for Tunisia, for the Tunisian people and for the Franco-Tunisian partnership," Castex told reporters after their meeting. Those measures include slashing state subsidies used to keep the prices of essential goods low, restructuring state-owned companies and selling off government-owned stock, and cutting the public sector payroll. According to Reuters, the state Tunisian General Labour Union (UGTT), with more than a million members, strongly opposes the proposals.

Last month, Tunisian Central Bank  governor Marouane Abassi pleaded before the Tunisian Parliament to appeal to the IMF for a $4 billion loan necessary to patch its budget.

"If we do not negotiate with the IMF, no one will agree" to loan Tunisia money in the future, Abbasi said. It would be the country’s fourth IMF loan in 10 years.

He cautioned that an alternate proposal - financing the deficit using the central bank - would lead to a “Venezuelan scenario” of hyperinflation.

"The Central Bank is not ready to open the floodgates to finance the budget, because within four months we would find ourselves with triple-digit inflation," Abassi said.

Last year, Paris pledged to lend Tunis €350 million, although it has paid out just €100 million of that promise. Castex pledged to see the rest of the money dispersed, which had been held up because Paris wanted to see further economic reforms.

Tunisia’s fragile economy took a nose-dive during the COVID-19 pandemic, with gross domestic product shrinking by 8.9% in 2020 and unemployment reaching as high as 18%. In the first quarter of 2021, its economy shrank a further 3%, according to the Tunisian State Statistics Institute.

Further, its foreign debt reached the symbolic number of 100 billion dinars (€30 billion), or 100% of its GDP. However, according to AFP, the IMF expects Tunisia’s GDP to grow by 3.8% this year.

Castex also asked Mechichi to stem the flow of migrant crossings from Africa to Europe, many of which set out from the Tunisian coast due to its close proximity to both Sicily and greater Italy. However, Mechichi told Le Figaro afterwards that this was “insufficient and impossible” and that the flow of migrants from Africa to Europe could only be addressed by “a solidarity-based model of development.”

Early last month, as the country entered another lockdown to control spread of the disease, Mechichi described the outbreak as "the worst health crisis in its [Tunisian] history.” According to experts who spoke with Al Jazeera, the number of hospitalized patients had doubled since early April, pushing to the limit. Tunisia has recorded more than 348,000 cases of COVID-19 and 12,793 deaths, out of a population of 12 million.

Parallel to Castex’s visit to Tunis, Tunisian President Kais Saied has travelled to Brussels for a summit with European Union leaders “geared towards fostering economic development through the boosting of cooperation in various fields, including job creation, scientific and technological research, the green economy and renewable energy,” according to Agence Tunis Afrique Presse.

The press agency further noted that Tunisia gets as much as €300 million per year in financial support from the EU, which is put into infrastructure projects, and that on Tuesday Brussels had given another €300 million in “macro-financial assistance” to Tunisia.