Message of Strength to US? Two Iranian Warships Reportedly Continue Sailing to Venezuela 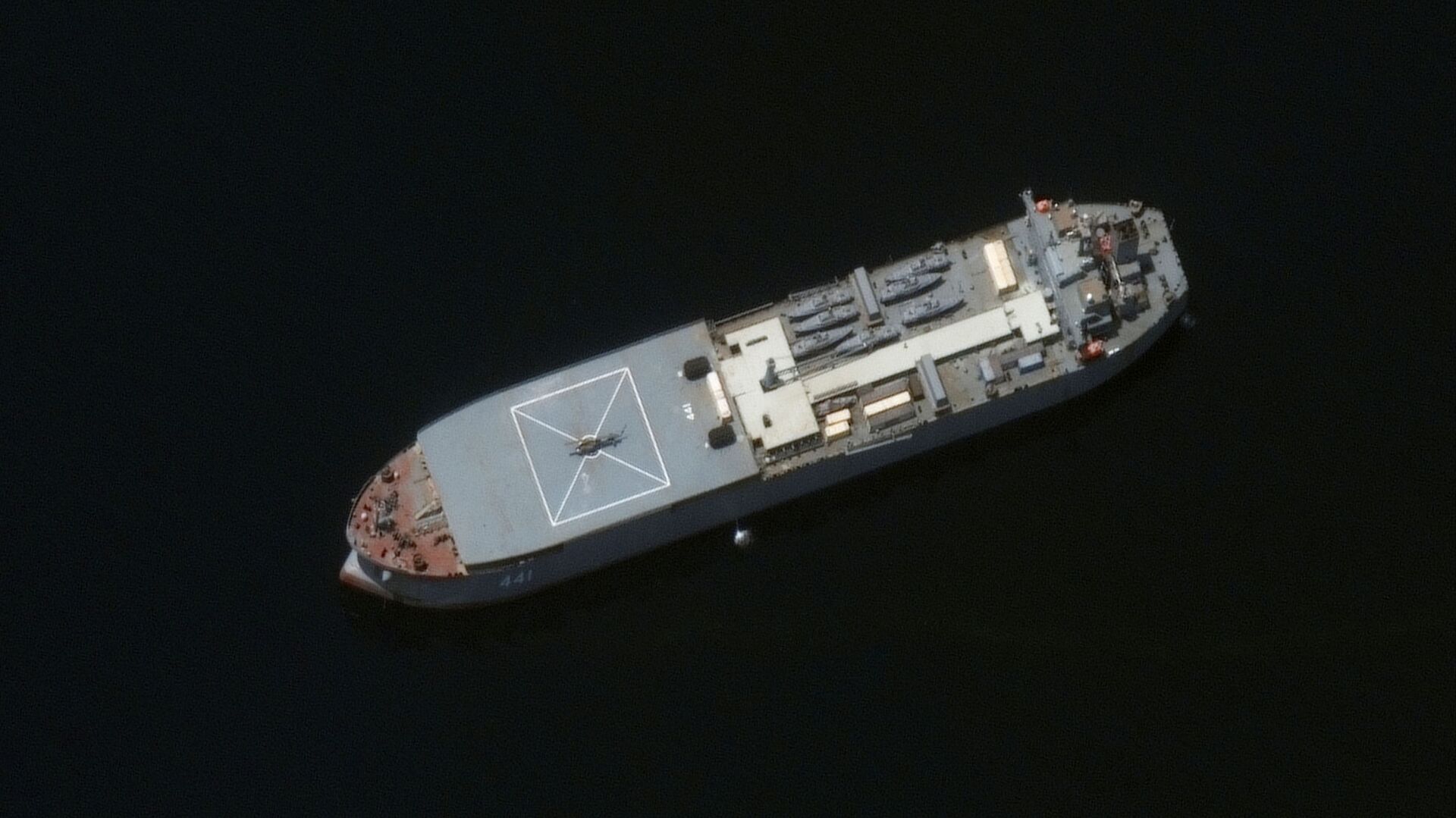 Oleg Burunov
All materialsWrite to the author
Earlier this week, a US Department of Defence official said that the Pentagon had no plans to deploy Navy ships to intercept the Iranian vessels.

Two Iranian warships sailing along the east coast of Africa are due to enter the Atlantic Ocean by Friday, Politico has cited unnamed US sources as saying.

The news outlet last week said that US national security officials are reportedly keeping a watchful eye on the movements of two Iranian naval vessels that are believed to be heading for Venezuela.

The ships are said to include an Iranian Navy frigate and the Makran, an oil tanker-turned-staging base, capable of offering a platform for electronic warfare and special operations missions due to its armament capabilities, according to Iranian media. The Makran reportedly left its port in late April with seven high-speed missile-attack craft strapped to its deck.

#US is monitoring an Iranian frigate & the Makran, a former oil tanker converted to a base, heading south along the east coast of Africa, and maybe heading to #Venezuela. The US is bullying the Venezuelan government (under heavy Us sanctions)if the two Iranian ships are welcomed. pic.twitter.com/bTLApQ3Rdu

The sources, meanwhile, said on Wednesday that their “belief” that the vessels are “heading toward Venezuela has not changed”.

Politico also quoted an unnamed spokesperson for the US National Security Council as claiming that Venezuela purchased weapons from Iran over a year ago, also warning that any new delivery of arms “would be a provocative act and a threat to our partners in this hemisphere”.

"We would reserve the right to take appropriate measures — in concert with our partners — to deter the delivery or transit of such weapons”, the spokesperson added.

The Iranian Foreign Ministry, in turn, told Politico that US officials should avoid miscalculations about the Islamic Republic’s warships sailing in international waters.

IRINS Makran-Iranian Navy's Largest Ship till date; An oil tanker converted to forward staging base with an Aviation Deck and attack boats. pic.twitter.com/R1glOWpODa

“Iran is always present in international waters and has this right under international law and can be present" in the area, Iranian Foreign Ministry spokesperson Saeed Khatibzadeh told reporters earlier this week.

He said that “no country can violate this right” and that "those who live in glass houses must be cautious".

Republican Senator Marco Rubio described the reported journey of the Iranian warships as an attempt to “project a message of strength to the Biden administration”.

“This has all the markings of delivery on an arms sale (such as fast attack boats) to Venezuela”, he tweeted on Wednesday.

Pentagon spokesperson John Kirby, for his part, told reporters that he wouldn't "speculate about what the Iranian Navy might or might not do”.

In September 2020, Iran sent the MT Horse to deliver some 2.1 million barrels of condensate, a very light form of oil, to Venezuela, which was hit by a serious fuel shortage caused by US sanctions.

Iran Warns Against 'Miscalculations' After Reports About Allegedly Venezuela-Bound Warships
This came after five Iranian tankers, the Clavel, the Faxon, the Fortune, the Forest, and the Petunia, delivered more than a million barrels of oil to Venezuela, in what the chief commander of Iran's Islamic Revolutionary Guard Corps (IRGC), Hossein Salami, said was Tehran's "biggest display of power".

Regarding Iran, the US reinstated its restrictive measures against the Islamic Republic in May 2018, when then-President Donald Trump announced Washington's unilateral withdrawal from the 2015 Iran nuclear deal, also known as the Joint Comprehensive Plan of Action (JCPOA).