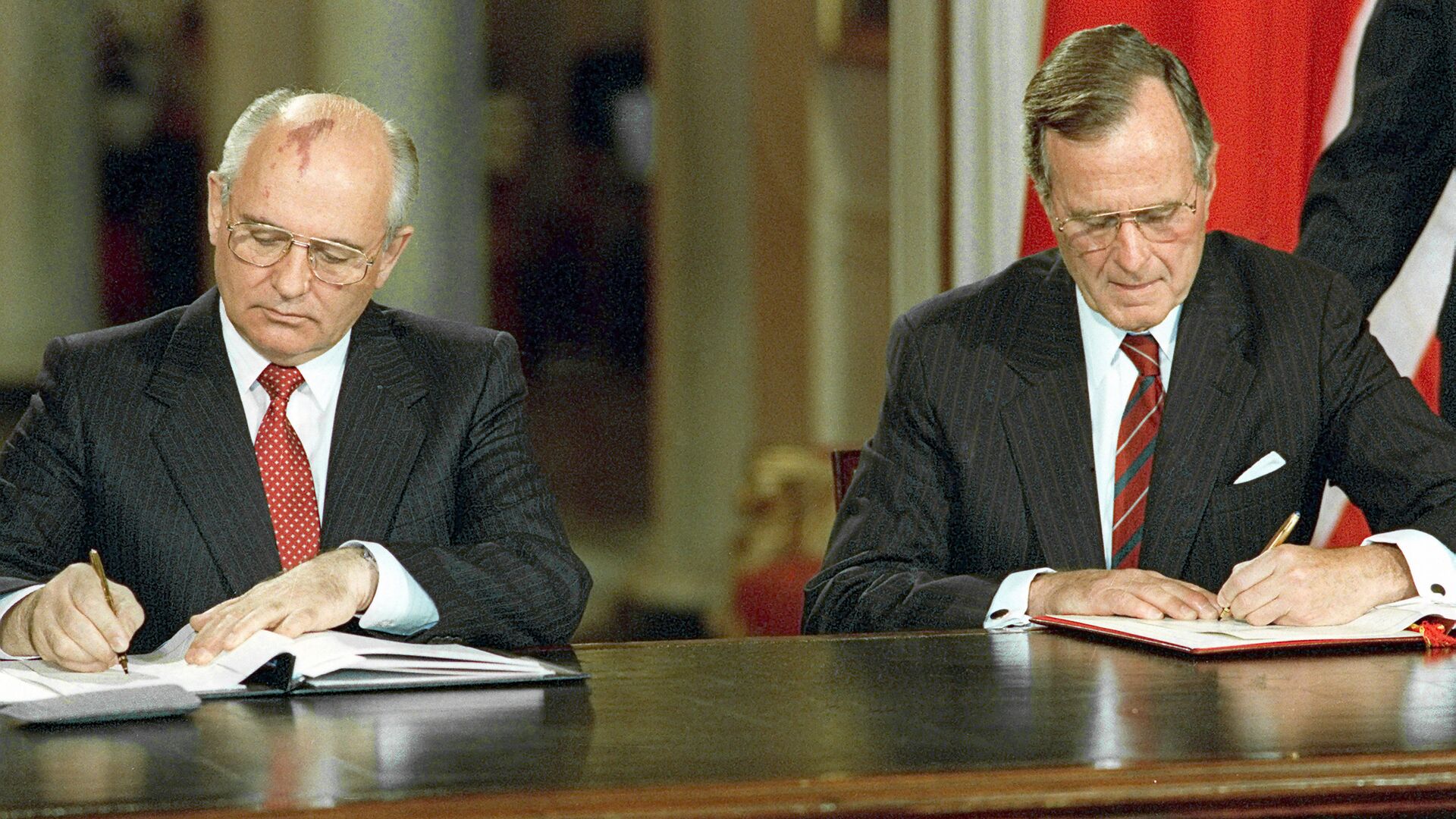 Ekaterina Blinova
All materialsWrite to the author
NATO non-enlargement promises to Soviet leaders following the fall of the Berlin Wall have again prompted a debate in the media. What's behind the timing of the Western media's renewed attempt to downplay the famous "not one inch eastward" assurance as a myth?

Earlier this month two reports emerged concerning the "myth" of NATO's post-Cold War non-enlargement guarantees given to Soviet leader Mikhail Gorbachev and his entourage in 1989-91.

The first one, published by the London-based think tank Chatham House on 13 May claimed that "the USSR was never offered a formal guarantee on the limits of NATO expansion post-1990" listing it as one of multiple "myths" in the debate on Russia.

The second, released by US government-funded Radio Free Europe/Radio Liberty (RFE/RL) discussed the genesis of the issue, citing 20th century political dinosaurs and academics who argued that Soviet leader Gorbachev did not seek any assurances about NATO enlargement to other Warsaw Pact countries beyond re-unifying Germany "and certainly did not receive any."

RFE/RL also quotes Gorbachev's 2014 October interview with Kommersant in which the former politician back-pedalled on his earlier remarks that the West had "tricked" the Soviet Union, saying: "The topic of 'NATO expansion' was never discussed; it was not raised in those years. I am saying this with a full sense of responsibility."

However, RFE/RL somehow failed to cite a National Security Archive publication from December 2017 of declassified bombshell documents which indicated that throughout the process of Germany's unification in 1990-91, US Secretary of State James Baker and leaders of the UK, France, and Germany indeed assured Gorbachev and other Soviet officials that NATO would not expand eastward. 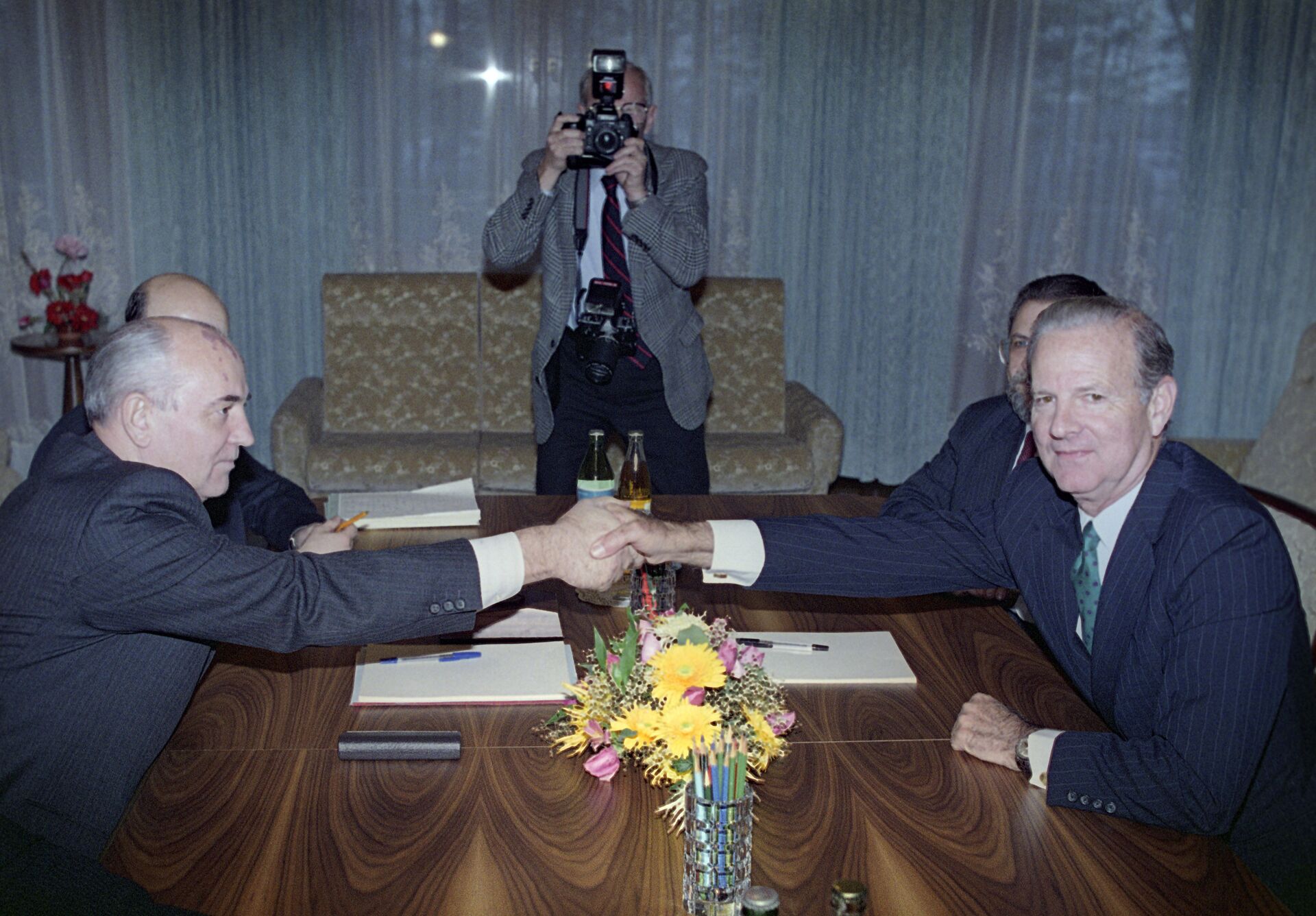 "We understand the need for assurances to the countries in the East," Baker told Gorbachev on 9 February 1990. "If we maintain a presence in a Germany that is a part of NATO, there would be no extension of NATO's jurisdiction for forces of NATO one inch to the east."

"It goes without saying that a broadening of the NATO zone is not acceptable," said Gorbachev.

"We agree with that," replied Baker.

The declassified documents show that discussions of NATO in the context of German unification weren't limited to the status of East Germany's territory and that Western leaders discussed and rejected Central and Eastern European membership in NATO as of early 1990 and through 1991.

A British memo dated 6 February 1990 quotes West German Foreign Minister Genscher telling British Foreign Minister Douglas Hurd: "When he talked about not wanting to extend NATO that applied to other states beside the GDR. The Russians must have some assurance that if, for example, the Polish Government left the Warsaw Pact one day, they would not join NATO the next." 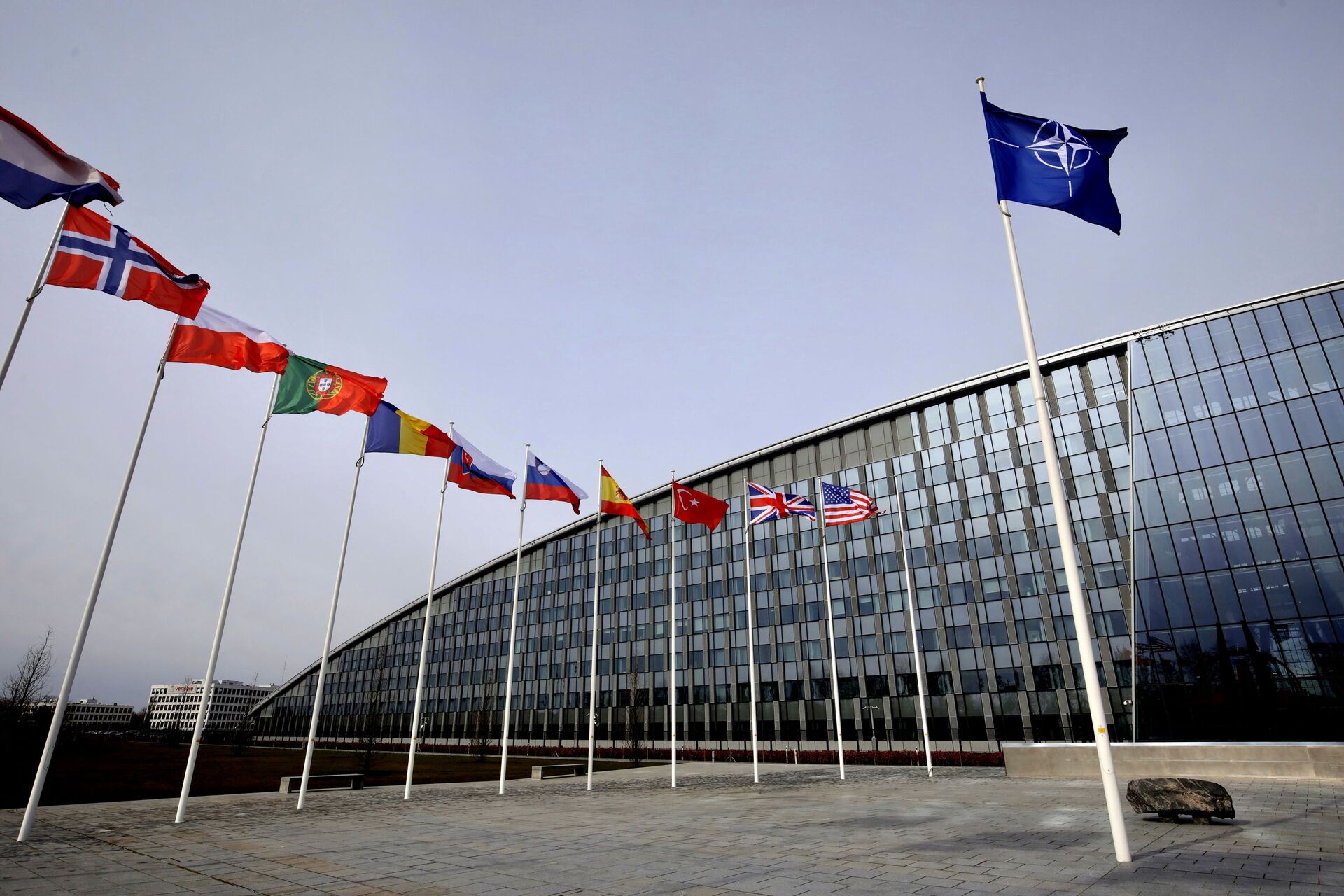 US MSM Remains Tight-Lipped About the Archive Docs

"From reading the documents it is clear they made those assurances several times, and not only the US but their allies the British and the French," says Christopher C. Black, a Toronto-based international criminal lawyer with 20 years of experience in war crimes and international relations. "But it is very interesting that the US stated openly that the purpose of keeping NATO alive was to give them a reason to keep troops in Germany as an occupying power, so that Germany could not become truly independent and a world nuclear power on its own. They stated Germany must be kept down, under control. And this is what they have done. They lied and stated they had no hostile intentions towards Russia, yet they expanded NATO immediately."

Remarkably, following the release of the documents by the National Security Archive, just a handful of American media outlets addressed the issue, namely Bloomberg, The National Interest, and the American Conservative. The New York Times, Washington Post, CNN, MSNBC, NPR, and PBS failed to publish a word about the revelation, as American Professor Stephen F. Cohen pointed out in January 2018.

Not that the US mainstream media wasn't interested in Russia's affairs, the professor noted, citing their 24/7 "Russiagate" coverage. They neglected it "most likely because the evidence fundamentally undermines their essential overarching narrative that Putin’s Russia is solely responsible for the new Cold War and all of its attendant conflicts and dangers," Cohen suggested at the time.

It appears that Chatham House and RFE/RL were guided by the same logic, deems Max Parry, a US independent journalist and geopolitical analyst.

"As US hegemony continues to decline internationally, the Washington political establishment is increasingly desperate to maintain control of the narrative and turn reality on its head to portray Moscow as somehow being the aggressor," Parry says. "When the media haven't trivialized the importance of the documents, they have ignored the abundance of proof all together by simply lying by omission and not reporting it.  It is not by chance that virtually no major news outlets in the US provided any coverage of the publication of documents from the National Security Archive." 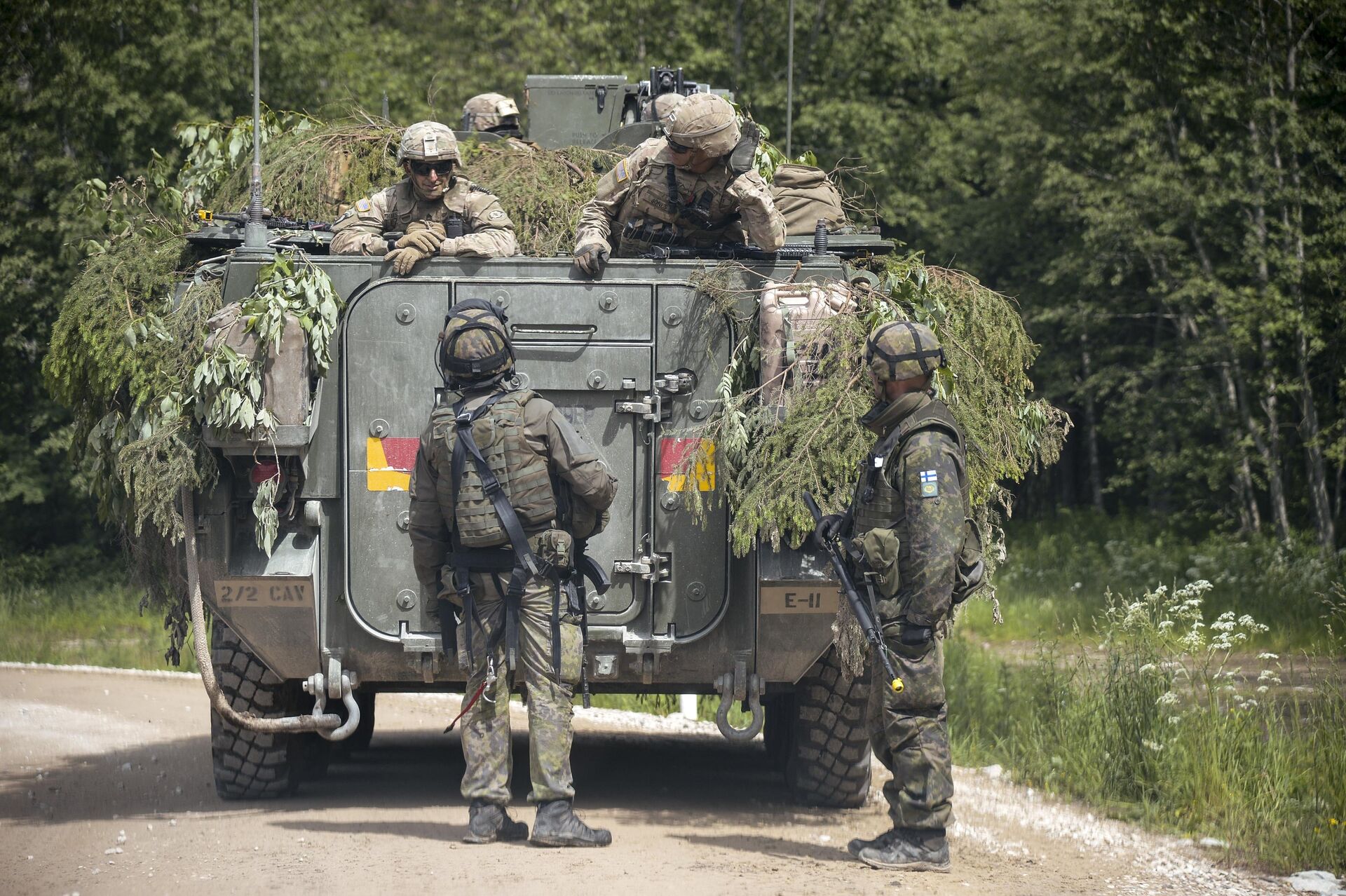 NATO troops at a range in Estonia participating in the Saber Strike-2016 exercises, June 2016.
© Sputnik / Sergey Stepanov
/
Go to the photo bank

Contrary to the assurances from major Western leaders, NATO has since expanded to 15 countries, most recently absorbing Montenegro and North Macedonia as member states "in a continuous military encirclement and aggressive expansion of the Western sphere of influence on Russia's borders," according to Parry.

"[Now] Washington has no choice but to minimise the clear evidence of this reneged agreement because it collapses their entire narrative and geostrategy of casting Moscow as a foreign aggressor," the journalist explains.

The publication of the Chatham House and RFE/RL articles followed the release of NATO's new 2030 doctrine which advocates strengthening NATO's role and deterring Russia's "aggression."

The document claims that "after the end of the Cold War, NATO attempted to build a meaningful partnership with Russia," however, by the alliance's account of events, Russia resorted to "aggression" and started "routinely engag[ing] in intimidatory military operations in the immediate vicinity of NATO." Members of the U.S. Army of the Pennsylvania National Guard arrival by plane at a airport in Vilnius, Lithuania, Sunday, June 5, 2016.
© AP Photo / Mindaugas Kulbis

At the same time, the Biden administration has bolstered US military activities in the Arctic, naming Russia a "strategic competitor" in the region, while trying to challenge Moscow's historic maritime claims along the Northern Sea Route.

Simultaneously, a EU foreign policy draft report made its way to the media, groundlessly accusing Moscow of "interfering with acts of terrorism on the territory of EU Member States," and calling for deterring Russia and overhauling its political system.

The story of Western leadership and NATO's betrayal of Moscow clearly undermines the "Russia aggression" narrative, according to Parry. Concurrently it raises the question as to how Russia's military exercises within the country's borders are now seen by NATO as "operations in the immediate vicinity of [the Alliance]." 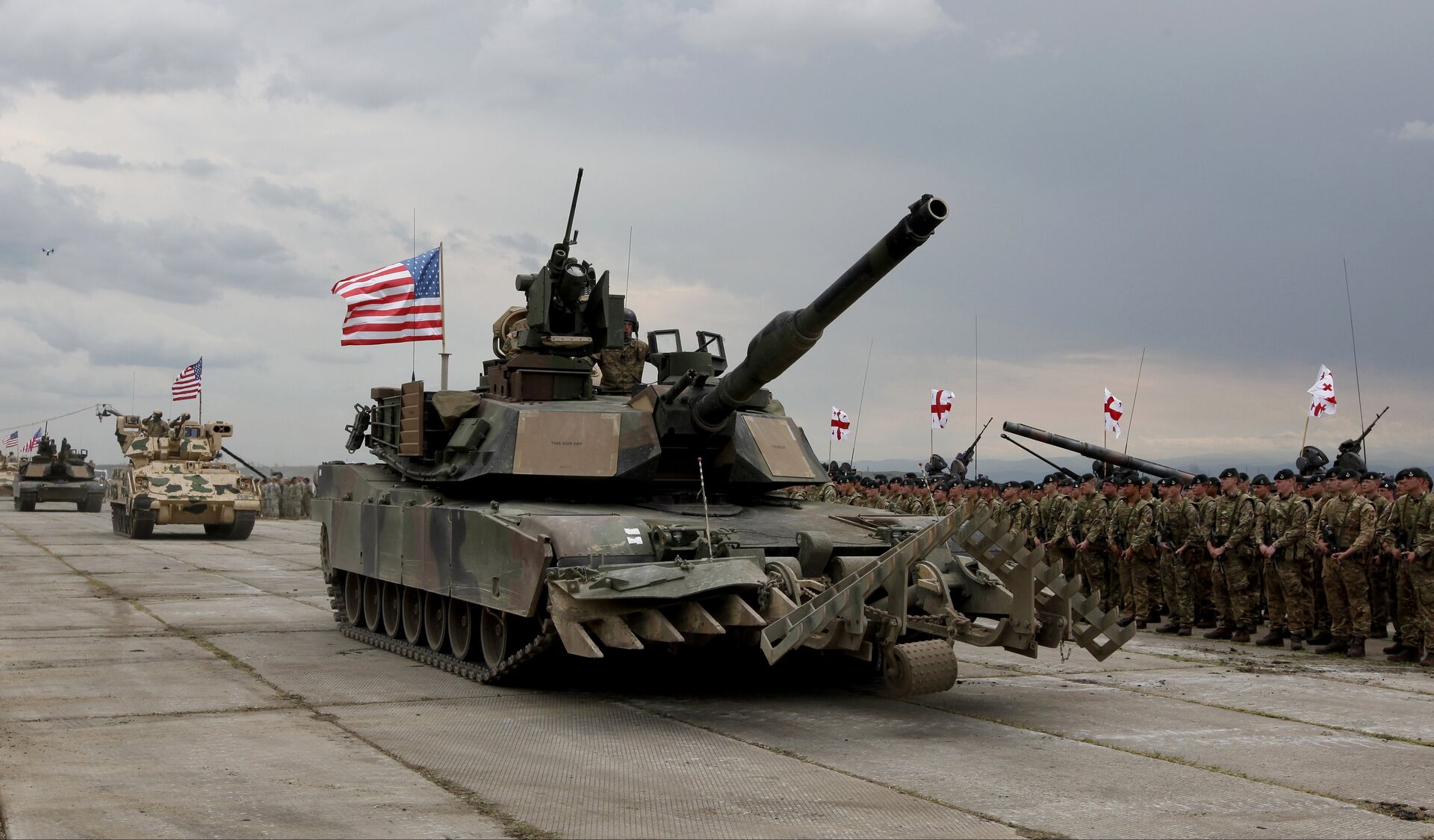 U.S servicemen drive their armored vehicles at the opening ceremony of U.S, British and Georgian troops joint military exercises at the Vaziani military base outside Tbilisi, Georgia, Wednesday, May 11, 2016.
© AP Photo / Shakh Aivazov

Will a Written Accord Between USSR and the West Change Anything?

The absence of a formal treaty between NATO member states and the USSR on non-enlargement of the Alliance is routinely cited as the Soviet "blunder" and is used to try to diminish the significance of the famous “not one inch eastward” assurance about NATO expansion.

However, Parry does not believe that a formal treaty would anyhow prevent NATO's expansionist push.

"Although it is true that Gorbachev made an enormous blunder by not insisting upon the ratification of a treaty to stipulate the agreement, since when has giving formal consent in the form of a contract ever prevented the US from backtracking on its political commitments?" the journalist asks rhetorically.

He draws attention to the fact that the US "has been tearing up one Cold War-era arms control treaty after another since the dissolution of the Soviet Union, starting with the George W. Bush administration withdrawing from the Anti-Ballistic Missile treaty."

"If Gorbachev had gotten a written accord, would it have made any difference? The irony is that by insisting that the terms were not legally binding, the West is admitting to its own duplicity in issues of statecraft," Parry concludes.