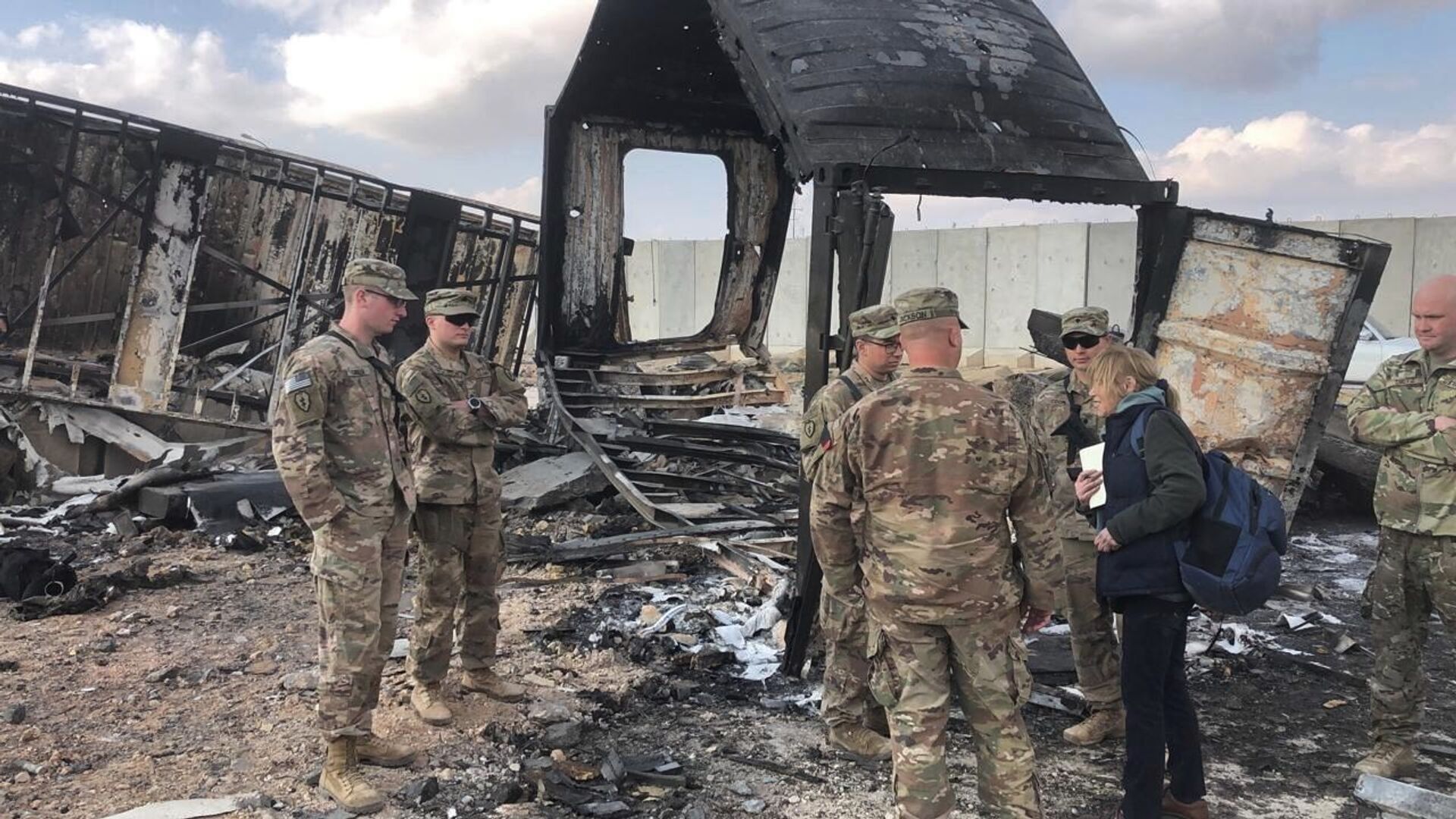 Svetlana Ekimenko
All materialsWrite to the author
Amid calls by Iraqi political forces for the withdrawal of American troops from the country under a parliamentary decision issued on 5 January 2020, military bases housing US forces there have been increasingly targeted with missile attacks, attributed by Washington to armed factions loyal to Iran.

The US-led coalition in Iraq has denounced the swiftly-evolving drone threat as the military mission’s biggest concern in the country, reported The Washington Post.

Iran-backed militias are accused by American military officials as increasingly resorting to sophisticated drones capable of evading detection and targeting military bases and diplomatic facilities, with some commanders describing their soldiers as “sitting ducks”.

In place of rocket attacks, the militiamen have turned to employing small, fixed-wing drones that fly too low to be picked up by defensive systems, US military officials and diplomats are cited as saying. Currently, there are around 3,000 troops, including 2,500 US forces, remaining in Iraq as part of the coalition fighting Daesh*.

After each new attack, US officials were cited as rushing to determine whether Americans had been killed or injured.

“The death of an American is their red line. The first question the Americans always ask is: what was the casualty’s nationality?” a Western official was quoted as saying.

Better defences against the drones are currently under development, according to the top US military commander in the Middle East, Marine Gen. Frank McKenzie.

The General was cited as emphasising the ongoing search for ways to cut command-and-control links between a drone and its operator, as well as improving radar sensors to quickly identify the approaching threat. Means are also being developed to effectively bring down such unmanned aircraft.

“We’re open to all kinds of things… Still, I don’t think we’re where we want to be,” he said, according to the Associated Press.

Electronic jammers are being considered, according to other sources.

A missile attack on 24 May targeted Ain Al-Asad Air Base, which houses American forces in Anbar province in western Iraq, the US-led coalition said in a statement, with no injuries reported. No group claimed responsibility for the attack. 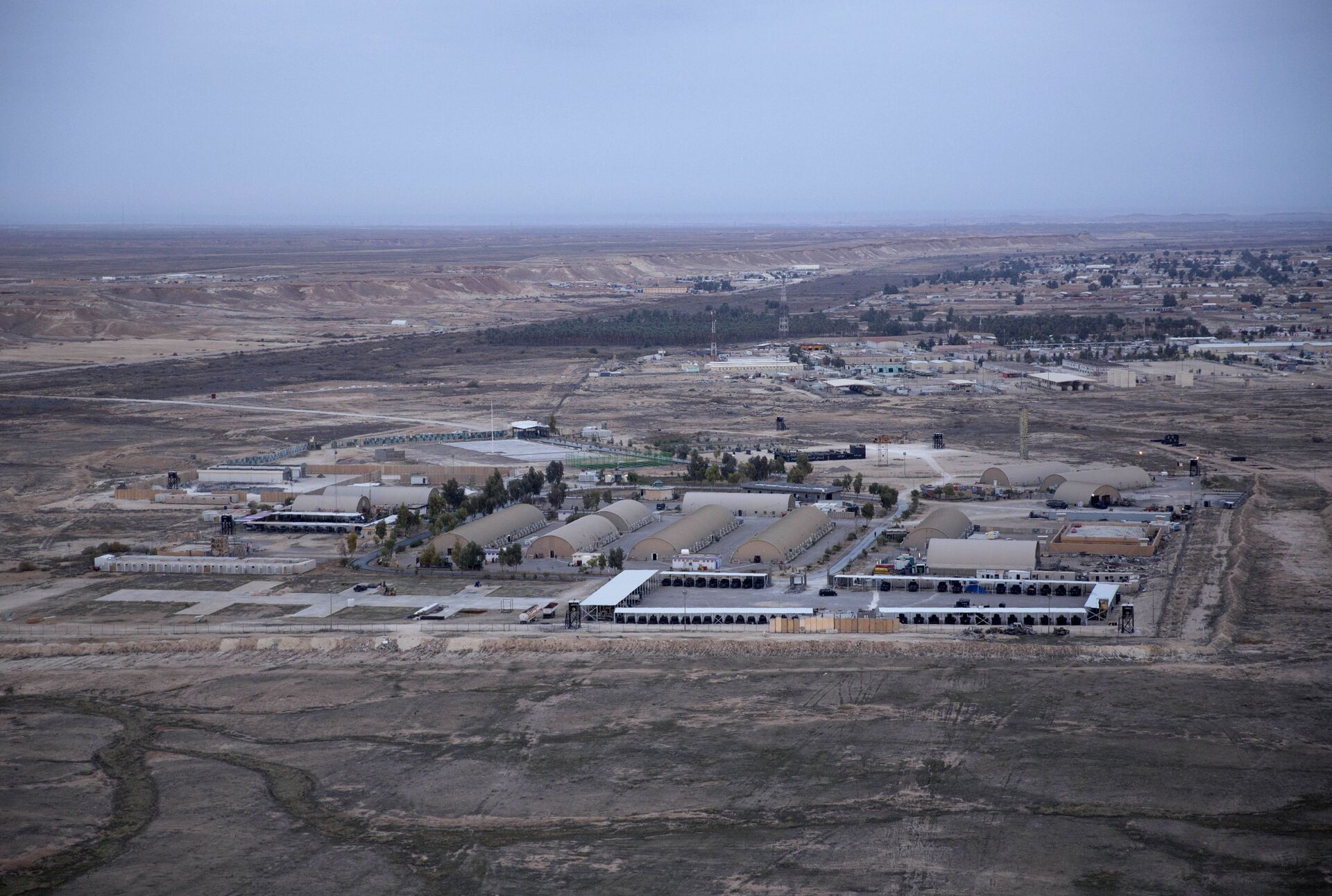 Earlier in May, a drone attacked Ain Al-Asad Air Base, damaging a hangar; it is the only base in the country still hosting the troops of the international anti-terrorist coalition.

“The damage wasn’t huge but the coalition were very upset. They told our commanders that it was a major escalation,” an Iraqi soldier stationed at Ain al-Asad was cited as saying.

Initial report: At 1335 local time, Ain Al-Asad Air Base (AAAB) was attacked by one rocket round. No injuries reported. Damage is being assessed. The attack is under investigation, for more information see @SecMedCell or @IraqiSpoxMOD

Ain al-Asad was previously targeted by Iran with ballistic missiles in January 2020 in retaliation for the US-ordered drone strike that led to the assassination of Iranian commander Maj. Gen. Qasem Soleimani earlier that month.

Over the past few months, military bases housing US forces in Iraq have been targeted with missile attacks that Washington has often attributed to armed factions loyal to Iran. In April, a drone strike targeted a hangar inside the airport complex in the northern city of Erbil in Iraq's Kurdistan Region, according to officials.

"A drone charged with TNT targeted a coalition base at Erbil's airport," the Kurdish region's interior ministry said, adding that no one was hurt in the blast but that a building had been damaged. 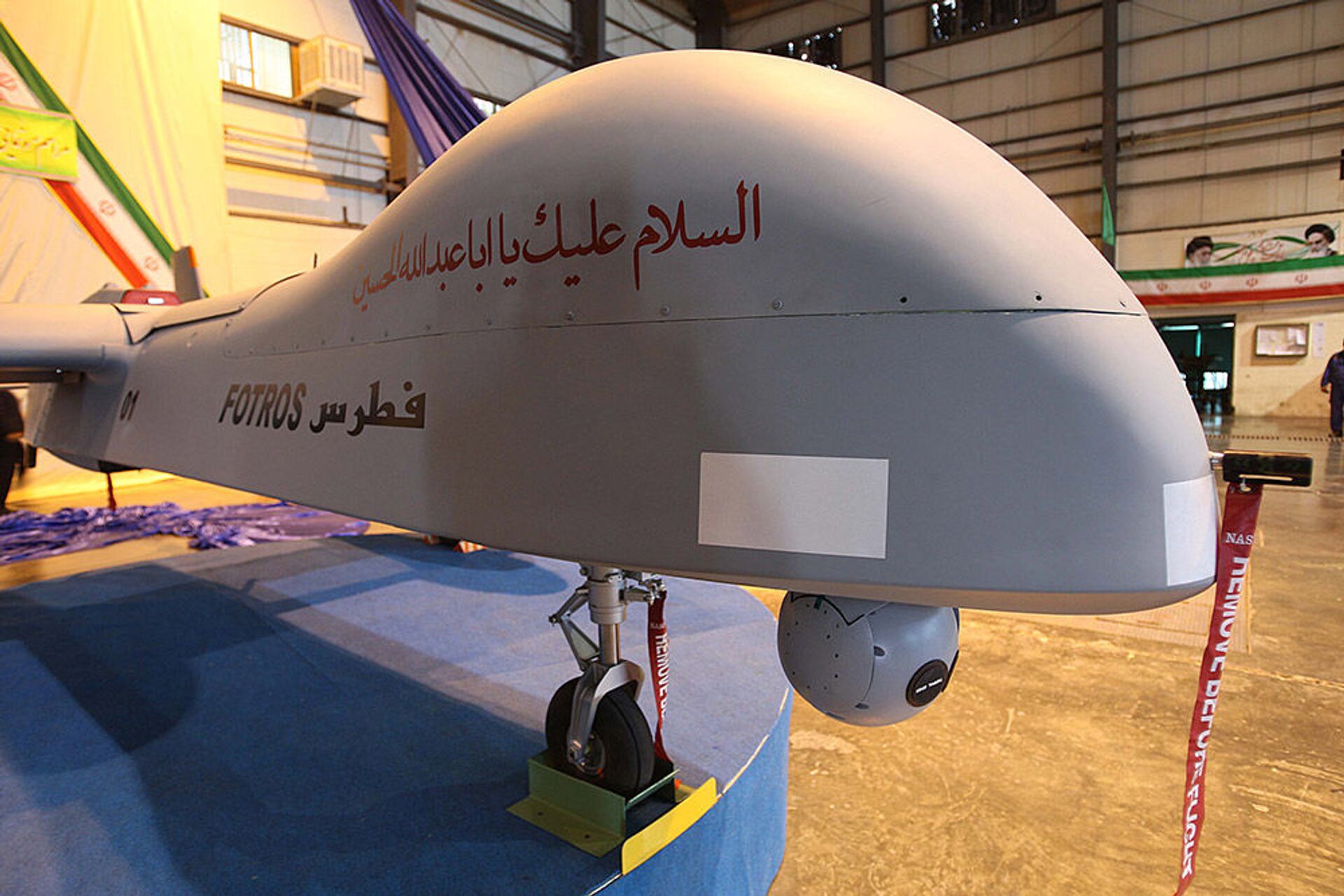 According to a cited coalition official, the flight of the drone employed in that attack, remains of which were partially recovered, was tracked to within 10 miles of the site, only to be lost as it moved into a civilian flight path.

Preliminary analysis suggested the sophisticated drone had been made in Iran, a coalition official said.

Earlier this year, a dozen rockets hit the Erbil air base. The mid-February attack left a civilian contractor dead and injured nine others, including a US serviceman.

A small Shiite militant group reportedly claimed responsibility for the attack. Amid the heightened targeting of US military facilities in Iraq, Western officials are cited as saying that deliberations have been ongoing over how to respond.

Some, like the National Security Council’s coordinator for the Middle East and North Africa, Brett McGurk, were reportedly in favour of a military response, according to sources cited by the outlet.

However, the administration of US President Joe Biden ostensibly decided against taking military action. Sources claim that officials are citing concerns over potential future attacks in a new spiral of tit-for-tat violence amid Iraqi pressure on US and other coalition forces to withdraw. 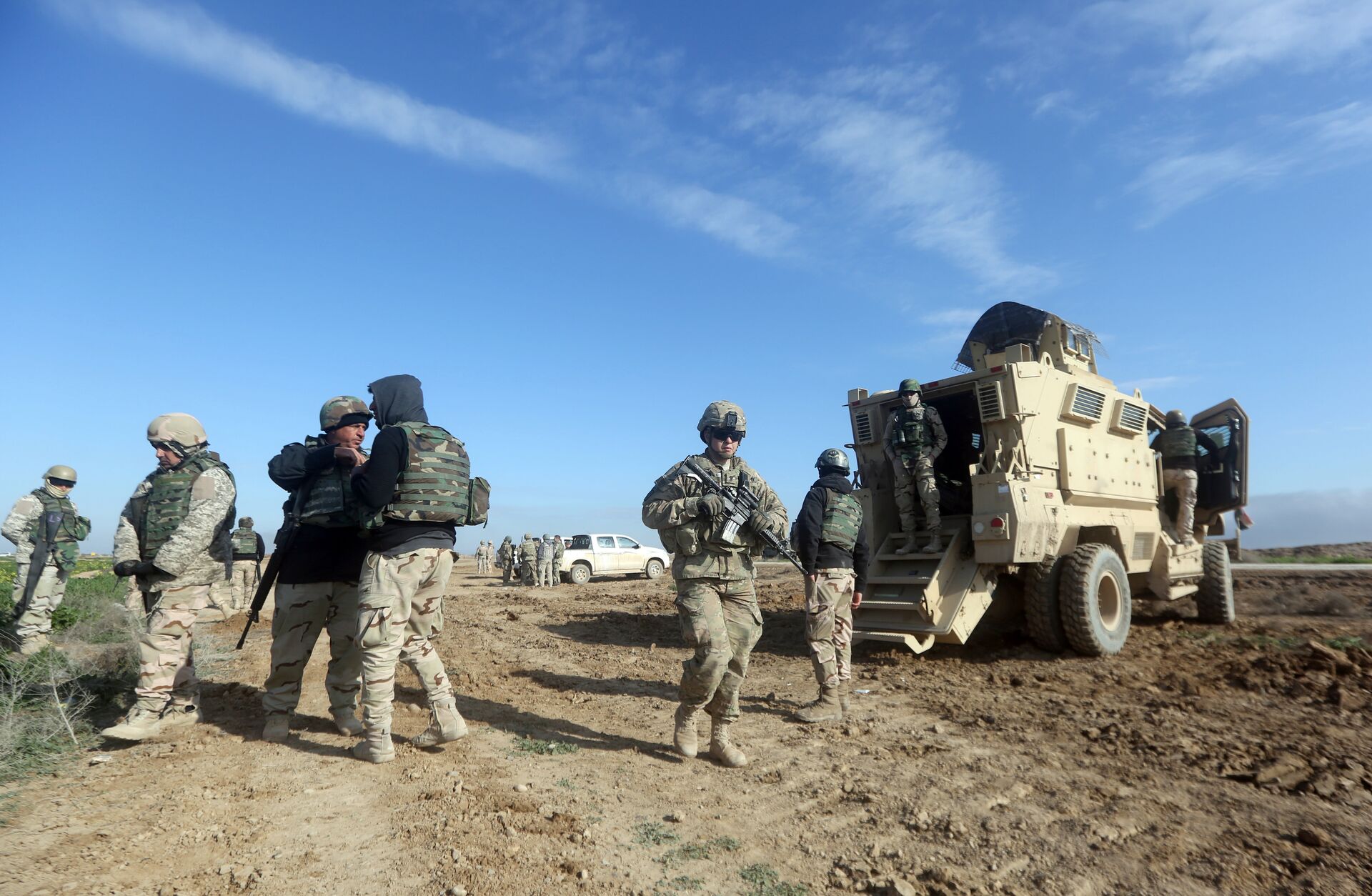 US soldiers monitor as they train Iraq's 72nd Brigade in a live-fire exercise in Basmaya base, southeast of the Iraqi capital, Baghdad, on January 27, 2016
© AFP 2022 / AHMAD AL-RUBAYE

Early last year, the Iraqi parliament voted to end the presence of all foreign forces in the country in response to Washington's decision to launch a drone attack near Baghdad International Airport that killed senior Iranian commander Qasem Soleimani.

In early April, Iraq and the United States announced their agreement to withdraw US-led coalition forces according to timetables determined by joint technical military committees, following a third round of strategic dialogue between the two parties. It was also agreed to change the nature of the anti-Daesh coalition’s mission from combat to advisory and training.

According to Iraqi Prime Minister Mustafa Al-Kadhimi, national security services had greatly boosted their capability, allowing the country to soon forgo the need for foreign forces to be present on its soil.

*Daesh (also known as ISIS/ISIL/IS), Jabhat al-Nusra (also known as Al-Nusra Front, Jabhat Fatah al-Sham, or al-Qaeda in Syria) are terrorist organizations outlawed in Russia and many other states.