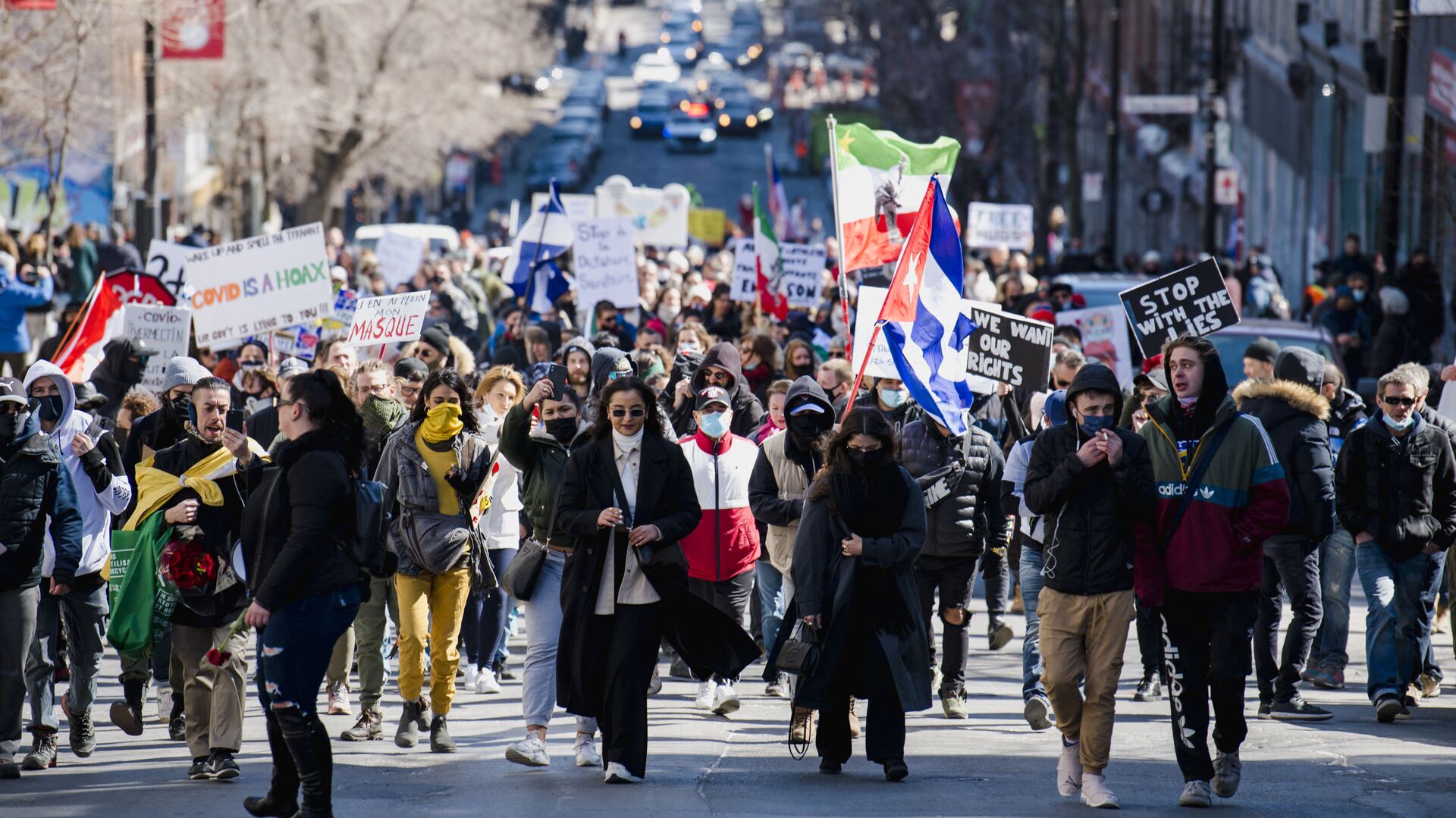 Denis Bolotsky
All materialsWrite to the author
As provincial governments all over Canada are enforcing various coronavirus-related restrictions, large numbers of people are rallying against them, facing heavy fines and tough police action.

According to Adam Knutson, a representative of Saskatchewan's Freedom Alliance - a group with over 4,700 members on Facebook, his fellow activists are prepared to fight for their constitutional rights, ignoring various forms of pressure from the system.

Sputnik: Just like other Canadian provinces, Saskatchewan is having its share of COVID restrictions. For instance, indoor private gatherings are limited to immediate households, outdoor gatherings for more than 10 people are prohibited, etc. There are also restrictions on retail and personal services. Not everyone is happy with these regulations. You represent the Freedom Alliance which is critical of many pandemic-related government policies. What are the key issues that you find unacceptable?

Adam Knutson: Well, there's a number of issues that have been pretty unacceptable. The government has taken the position that they can tell you how many people you're allowed to have in your own private home. And that's one of the things that we've opposed all the time, is that, you know, if you want to take the risk of having guests over into your own private home, that should be up to you to make the decision, you and your guest, to determine if you want to do that.

Canada Rights Watchdog Challenges Gov't COVID Quarantine Rules, Lawyer Points at Freedoms Violations
We've taken issue with the fact that economically they have put thousands and thousands of people out of work for varius short periods of time. So they've taken away the freedom of those people to choose their level of risk if they want to work or not. So, thousands and thousands of people got laid off for short periods of time; just recently they had all the restaurants closed in Regina. So every cook, every waitress was suddenly out of a job and at no fault of their own.

And so all those people never had a choice about whether they wanted to stay employed or not. The government just put them out of work. So it's very troubling on that matter. And, you know, restaurant owners and many other people in the service industry are out of work. And a lot of these people - they have rent to pay. They have car payments to make. They have a lot of different expenses. Restaurant owners have leases to pay on the building to rent the spaces at relatively high prices. It has put a very, very severe economic strain on the province. And those economic strains are going to have issues for years to come, I believe.

Sputnik: Police in your province have started taking photos of protesters and posting them online, asking social media users to identify these people. Police services are doing that while proclaiming that they are protecting the rights of people to express their opinion. Does it seem that by taking photos of protesters they want to pressure those who think differently?

Adam Knutson: Oh, absolutely, they absolutely want to scare protesters. The government, for some reason, has taken a real, serious hard line with protesters. And this is a very, very serious issue in this country because in a free, democratic, first-world nation, we expect that we should have the right to peacefully assemble and petition our government for a redress of grievances. And what the government has done basically is said that you can't do that with any more than 10 people.

​And if you try to do that, the government's going after people with very extensive fines. Twenty-eight hundred dollars each time. So, I mean, twenty-eight hundred dollars is two months' mortgage payments for a lot of people. It's a very, very severe, high-priced fine. That fine is a very direct attack on people's right to peacefully assemble and petition their government for a redress of grievances. So, if you believe the government is doing wrong and their choices are, you know, if you want to protest against something, they have basically declared those protests illegal because you can't have more than 10 people there.

And so, any kind of mass gathering - the government has just declared it illegal for claiming safety. And these protesters, they're not forcing anybody else to go to these protests, they're making their own risk assessment. And we have our chief medical health officer doing his regular press conferences. And we've got him on video repeatedly declaring that the risk of catching COVID-19 outside is incredibly minimal. But at the same time, the government is fining these people twenty-eight hundred dollars.

​And so now they started by going after the leaders - multiple of these leaders, and they've been issuing these fines and they're literally a traffic ticket fine. And some of these leaders of these protesters are like: "the government is wrong, the government cannot suspend our right to protest, our right to peacefully assemble. This is against the Canadian Constitution". And so the government's been writing these people more and more tickets. And some of these protesters have taken to a sport of seeing how many tickets they can get because they don't believe these tickets are going to stand up in court when they get there - it's actually in traffic court. Traffic court has been closed, all the regular speeding tickets and everything like that - all of those are being adjourned and rescheduled further out and all those tickets that the government has issued for twenty-eight hundred dollars, nobody has a chance so far to argue them in court. So, people are getting more and more of these tickets without having the ability to go to court and get it in front of a judge and get an actual judgment from a judge.

So we're in this legal limbo. Has the government somehow usurped the right to protest or are the protest leaders that are getting these tickets repeatedly - are they actually correct in saying that "no, we have a constitutional right to peacefully assemble". And without the courts - the traffic court, of all things, to go take our tickets to and fight, you can't get a judgment on it. So, they're getting stacked up.

There have been a few people that we believe have made the mistake of paying. And when they pay, it basically claims that they're guilty of the offence. But the vast, vast majority of those that have gotten these tickets are waiting for their day in court. And they believe that they're going to be right, that we have the right to peacefully assemble despite a pandemic.

Sputnik: A local TV station in Saskatchewan asked viewers recently what they think about the possible introduction of COVID vaccination passports in the province, and it appears that the majority (around 76%) is against them. At the same time, the federal government and Prime Minister Trudeau have not decided whether they will be implementing such IDs. If these passports will be introduced countrywide eventually, do you think that the opinion of people in your province and other provinces who are against these measures will be ignoring them one way or another?

Health Canada Urges Citizens to Get AstraZeneca Vaccine After Studying Blood Clots Reports
If you are sick, there are various ways that the government and the healthcare system can help people move around and get treated. But our mobility rights are not dependent on other factors such as our health. So, the thought of a passport or a vaccine passport being required is a very serious attack on people's freedom of movement. And we also have the issue over the last year or so with the American and Canadian land border crossing closed. You know, it's all fine and dandy to say that you have the right to leave the country, but if two countries collude together and say we're going to close the border, they are effectively squashing your right to travel.

There are very many Canadians that have families on the other side of the border that haven't been able to go visit them for a year. And now there's this thought that this vaccine passport's going to come in where they're going to demand that you take an experimental vaccine that hasn't even gone through all of the normal vaccine testing trials that normally vaccines are subject to, because they are being used specifically under emergency health orders authorisation. They haven't gone through the regular process. A lot of them are new types of vaccines that have never even been tried before. It's a grand experiment. And the thought that they're going to demand that you partake in this grand experiment in order to have the right to travel is just a straight up attack on people's freedom of movement. So, I don't think most Saskatchewan people are going to accept it. They're going to protest in whatever creative ways they can figure out and outright refuse to even go.