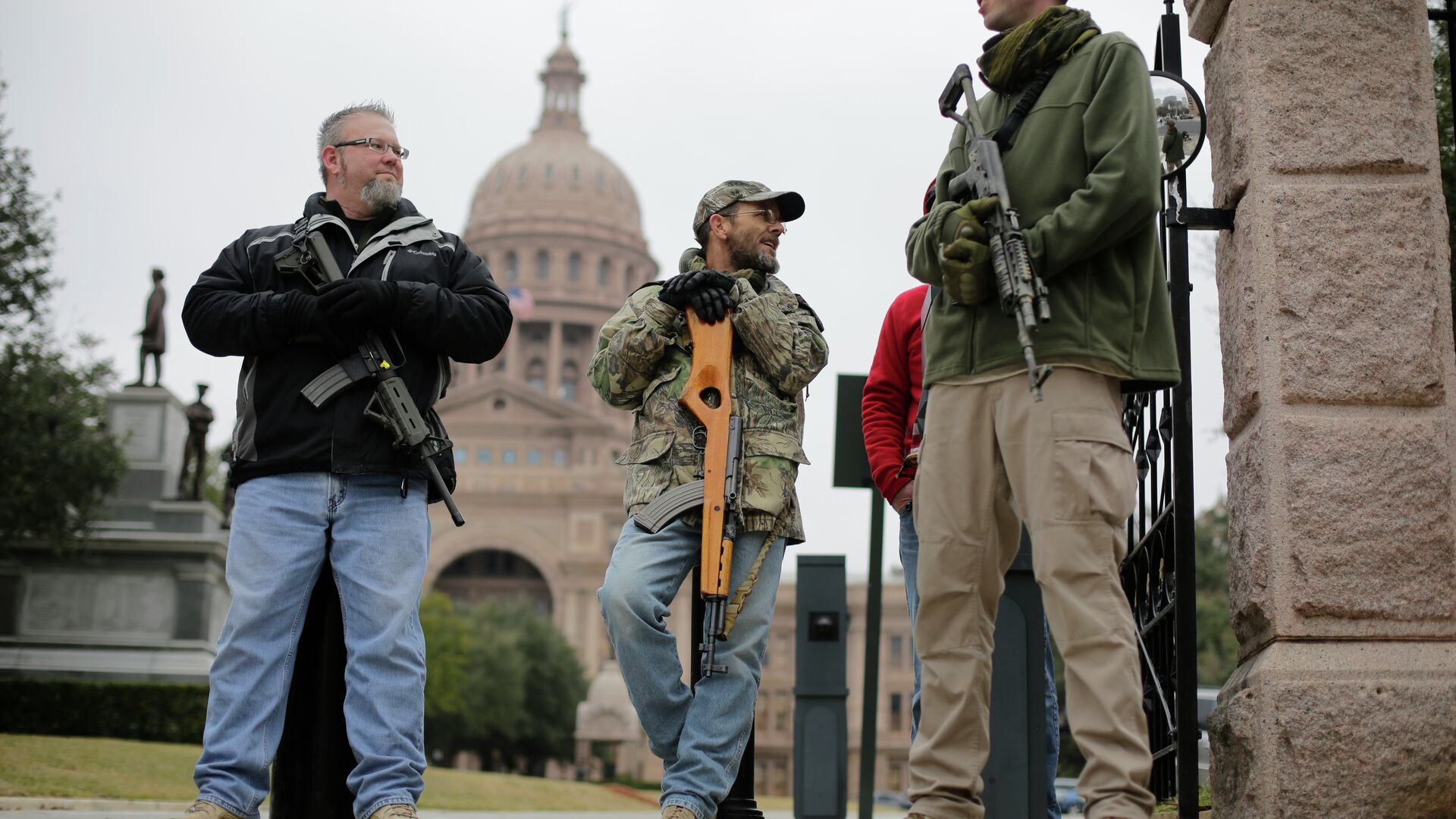 Svetlana Ekimenko
All materialsWrite to the author
Texas, which allows rifles to be carried in public without a license, has some of the loosest gun laws in the country. The state's Governor Greg Abbott said in February that he sought to “erect a complete barrier against any government official anywhere from treading on gun rights in Texas".

In defiance of widespread federal calls to tackle gun violence nationwide and a barrage of criticism by Democrats and gun control groups, the state of Texas is about to remove one of its last major gun restrictions.

The Republican-dominated legislature of a state that already has some of the most lenient gun laws voted 82-62 to approved a bill that would allow people to carry handguns without a license or the certification that they are qualified to own and use a weapon, reported the Texas Tribune.

Having cleared the Texas Senate, the legislation has been sent to Governor Greg Abbott, who welcomed the measure, which was long sought by conservative activists. He vowed to sign the bill legalising “permitless carry” as an affirmation of 2nd Amendment rights.

I just signed a Resolution naming the 1847 Colt Walker pistol the official handgun of Texas.

It was invented by a Texas Ranger & was America’s first six-shooter.

It was the gun of choice for US soldiers during the Mexican American war.

“This is a simple restoration of Texans’ constitutional right under the Second Amendment, a right of the people to keep and bear arms. I think it is a bill that is the strongest bill I’ve seen in my legislative career regarding the rights of our Second Amendment,” the Senate sponsor, Sen. Charles Schwertner, R-Georgetown, said on Monday.

Thus, House Bill 1927 would scrap the requirement for Texas residents to obtain a permit to carry handguns if they’re not prohibited by state or federal law from possessing a gun. Texas, known for some of the nation’s least strict gun laws, has more than 1.6 million handgun license holders.

“We need to erect a complete barrier against any government official anywhere from treading on gun rights in Texas," said Gov. Abbott said during his annual State of the State address in February 2021.

After it is signed into law, Texas will join Alaska, Idaho, Kansas, Wyoming and Arizona and over 400 local governments in at least 20 states in declaring themselves “sanctuaries for gun rights” that allow some form of unregulated carry of a handgun.

Critics of the new legislation have lambasted the move amid increased gun violence nationwide and Texas’ own recent history of mass shootings, including those at an El Paso Walmart, a church in Sutherland Springs, and a high school outside Houston.

Urgent calls have been made for an assault weapons ban and stronger background checks, among other changes. President Joe Biden and congressional Democrats have increasingly urged federal action following recent mass shootings around the country.

“Gun violence in this country is an epidemic, and it’s an international embarrassment. The idea that we have so many people dying every single day from gun violence in America is a blemish on our character as [a] nation,” Biden said on 8 April.

Gun control groups have decried the Texas legislation that they warn will endanger the public and law enforcement.

The measure would allow anyone 21 or older to carry a handgun provided they don’t have felony criminal convictions or other legal prohibition marring their background. In a conciliatory gesture, the bill include stiffer penalties for felons apprehended illegally carrying guns.

Texas, which has allowed people to carry handguns since 1995, has no state requirements for background checks on private guns sales, and has been reducing the cost and training requirements for obtaining a permit throughout the last decade.

A recent study by 1Point21Interaction found that Texas ranked the tenth most gun-friendly state in America.

Opponents of the bill have been citing the latest University of Texas/Texas Tribune poll that discovered a majority of the state’s voters thought that permitless carry was a bad idea after the deadly shootings in El Paso and the Midland-Odessa area that left 30 people dead.

​Netizens flooded social media to question the reasoning behind the drive to push through the legislation.

My word, what could possibly go wrong with this?

So now it's easier to get a gun in Texas than it is to vote. Sickening.

My kid will not be going to college in Texas.

​Supporters of the bill say abolishing superfluous impediments to the constitutional right to bear arms will only help Texans better defend themselves.

This is excellent news for law abiding-Second Amendment loving Texans. I applaud Texas legislators for passing this landmark legislation to make constitutional carry a reality and to protect the rights of law-abiding citizens. https://t.co/JjoYossMXu

A spokesperson for the National Rifle Association applauded the bill as the “most significant” gun-rights measure in the state’s history.

Thank you, @ColeHefnerTX and @SenCreighton, for your leadership getting this passed. #txlege

Businesses would not be prevented by the new legislation from banning guns on their property, while federal background checks for some gun purchases would remain in place.