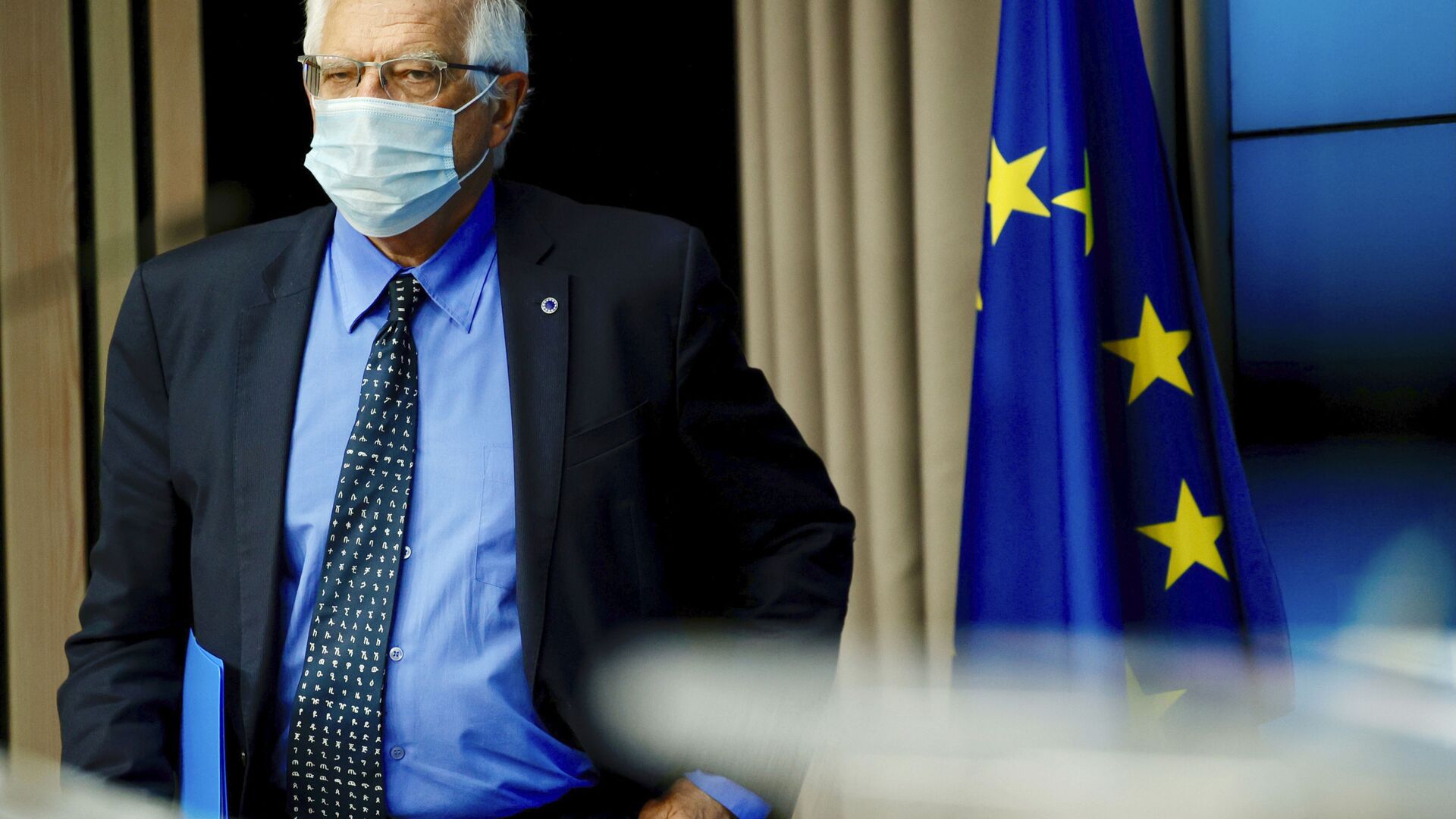 Morgan Artyukhina
All materialsWrite to the author
European Union leaders have directed High Representative of the EU for Foreign Affairs and Security Policy Joseph Borrell to prepare a report on the bloc's relations with the Russian Federation for a summit planned for next month.

"The European Council ... condemns the illegal, provocative and disruptive Russian activities against the EU, its Member States and beyond," the executive body said in a Monday statement "It reaffirms the EU's unity and solidarity in the face of such acts as well as its support to Eastern partners ... The European Council expresses its solidarity with the Czech Republic and supports its response."

At the Special Meeting of the European Council in Brussels on Monday, EU leaders expressed their commitment to the bloc's five guiding principles in relations with Russia laid out by Borrell’s predecessor, Federica Mogherini, following the 2014 US-backed coup in Ukraine. These include full implementation of the Minsk agreements; building closer ties with former Soviet republics; strengthening EU resilience to Russian threats; cooperation with Russia on certain issues where interests align; and support for people-to-people contacts.

At the first day of the summit, the EC condemned Russia's "provocative" actions against the EU and its members, and expressed solidarity with its eastern partners. EU members Estonia, Latvia and Lithuania were once member republics in the Union of Soviet Socialist Republics (USSR) alongside Russia, and several of the Soviet Union's longtime allies, including Poland, Romania, Bulgaria, the Czech Republic, Slovakia, and Hungary are also parts of the EU now.

The statement comes in the wake of a report last week by the Russian government on "foreign states committing unfriendly actions against Russia, citizens of Russia or Russian legal entities" that listed the United States and the Czech Republic. That, in turn, followed Prague declaring 18 Russian diplomats "personae no gratae" in April after claiming they were connected to 2014 explosions in Vrbětice that killed two Czech nationals. Czech Prime Minister Andrej Babis, in turn, urged other EU members to expel "at least one" Russian diplomat each in solidarity with Prague.

The statement also follows a Sunday incident in Belarus, a Russian partner and another former Soviet republic, that resulted in the arrest of a dissident accused of helping facilitate the unrest in the Eastern European nation last August.

A Ryanair airliner flying from Athens, Greece, to Vilnius, Lithuania, was forced to land in the Belarusian capital of Minsk on Sunday due to a bomb threat. While the threat turned out to be false, one of the aircraft's passengers was journalist Roman Protasevich, one of the founders of the Telegram channel Nexta, which has been designated as extremist by the Belarusian authorities. Protasevich was detained along with his companion, Russian citizen Sofia Sapega.

EU authorities and those of several member states have cried foul, claiming Protasevich's arrest is unjust and that incident was cooked up as an excuse to arrest him. Earlier on Monday, the EU moved to bar Belarusian aircraft from EU airspace in response to Protasevich's arrest, and Polish Prime Minister Mateusz Morawiecki has promised to push the issue of sanctions against Minks in response.

The Belarusian government has promised an investigation of the Ryanair grounding, the results of which will be made public, and invited international experts to participate.

While several Western figures, including US national security adviser Jake Sullivan, have expressed their concerns about the incident to their Russian counterparts, UK Foreign Secretary Dominic Raab stated on Monday that he didn't "have any clear details" on alleged Russian involvement in the incident.

Russian Foreign Ministry spokesperson Maria Zakharova has urged Western nations "to refrain from applying 'double standards'" to the Ryanair incident "and to take measures to soberly, without emotion, assess the situation on the basis of all available materials in cooperation with the Belarusian aviation authorities, demonstrating openness and readiness to interact."

The European Council is scheduled to meet next on June 24 and 25.