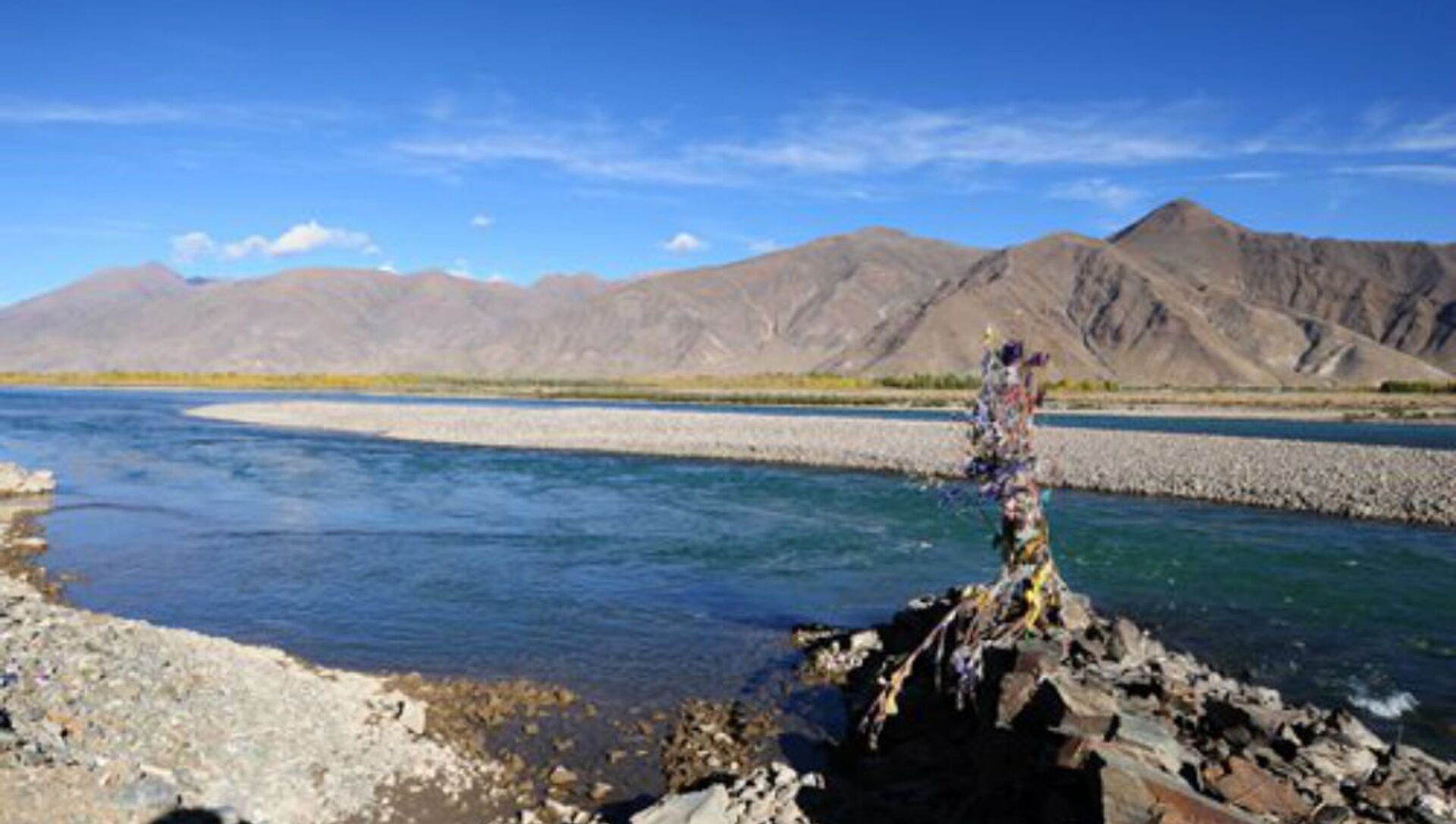 Priya Yadav
All materials
The proposed hydropower plant on the Yarlung Zangbo River is projected to have an electricity generation capacity of 70 gigawatts, about three times that of the Three Gorges Dam on the Yangtze River. The mission has been included in China's 14th five-year plan, beginning from this year, and has been approved by the National People's Congress.

China's ambitious plans to build a major hydro-power plant on the lower reaches of the river in the Tibet Autonomous Region has run into icy trouble. A naturally formed glacial lake on the Yarlung Zangbo River in Tibet has put a spanner in the plans of the Chinese authorities to build the Super Dam on the river's lower reaches, close to the border with the Indian state of Arunachal Pradesh. China has never recognised the current Arunachal Pradesh border and considers the region part of Tibet.

The go ahead for the dam was given last month by China's federal government. The dam will be built on Yarlung Zangbo River, that flows into Arunachal Pradesh as the Siang River and then as the Brahmaputra River in the Indian state of Assam before flowing into Bangladesh.

'China Wants to Drown Our Culture and Existence', Tibetans on Beijing's Plans for Super Dam in Tibet
The dam construction project has run into trouble after landslides in the higher reaches of the mountains led to formation of an unstable mountain lake with some 600 million cubic meters of water, the Hong Kong based South China Morning Post reported last week.

"With the river spilling over the top at present, the dam could collapse aat any time. The lake in Sedongpu Basin sits just a few dozen kilometres upstream from the planned construction site of the super hydropower plant. With so much water hanging overhead, construction workers cannot move in to clear the ground," said the report.

To build the big dam, China needs to get rid of the small dam formed by the landslide first, the report added.

"This area is extremely fragile ecologically. In 2017, the river water flowing into India had turned black due to landslides in China and the Chinese government had to clean up the river water. The region where the Super Dam has been proposed is in the seismic zone, which is prone to earthquakes. The dam's construction might trigger earthquakes and earthquakes could lead to collapse of the dam, unleashing destruction downstream. Either way, there is a chance of a national disaster," Dechen Palmo, a research fellow on Tibet Trans-Boundary Rivers at the Tibet Policy Institute told Sputnik.

"The lake has formed due to climate change, which has changed the face of the Tibetan plateau. The area is on the seismic fault lines where earthquakes happen more often - just two days ago there was an earthquake in Tibet and Shanghai and there are massive concerns that infrastructural development happening on the Tibetan plateau will cause an adverse impact on the environment, which in turn will impact the social economic life of the people,"she added.

A series of earthquakes and aftershocks rattled southwest and northwest China on 22 May, leaving at least three dead and 33 injured. The Yunnan quake, which had a magnitude of 6.4, struck on Friday, causing 192 houses to collapse, and led to the evacuation of nearly 20,000 people from the mountainous region. 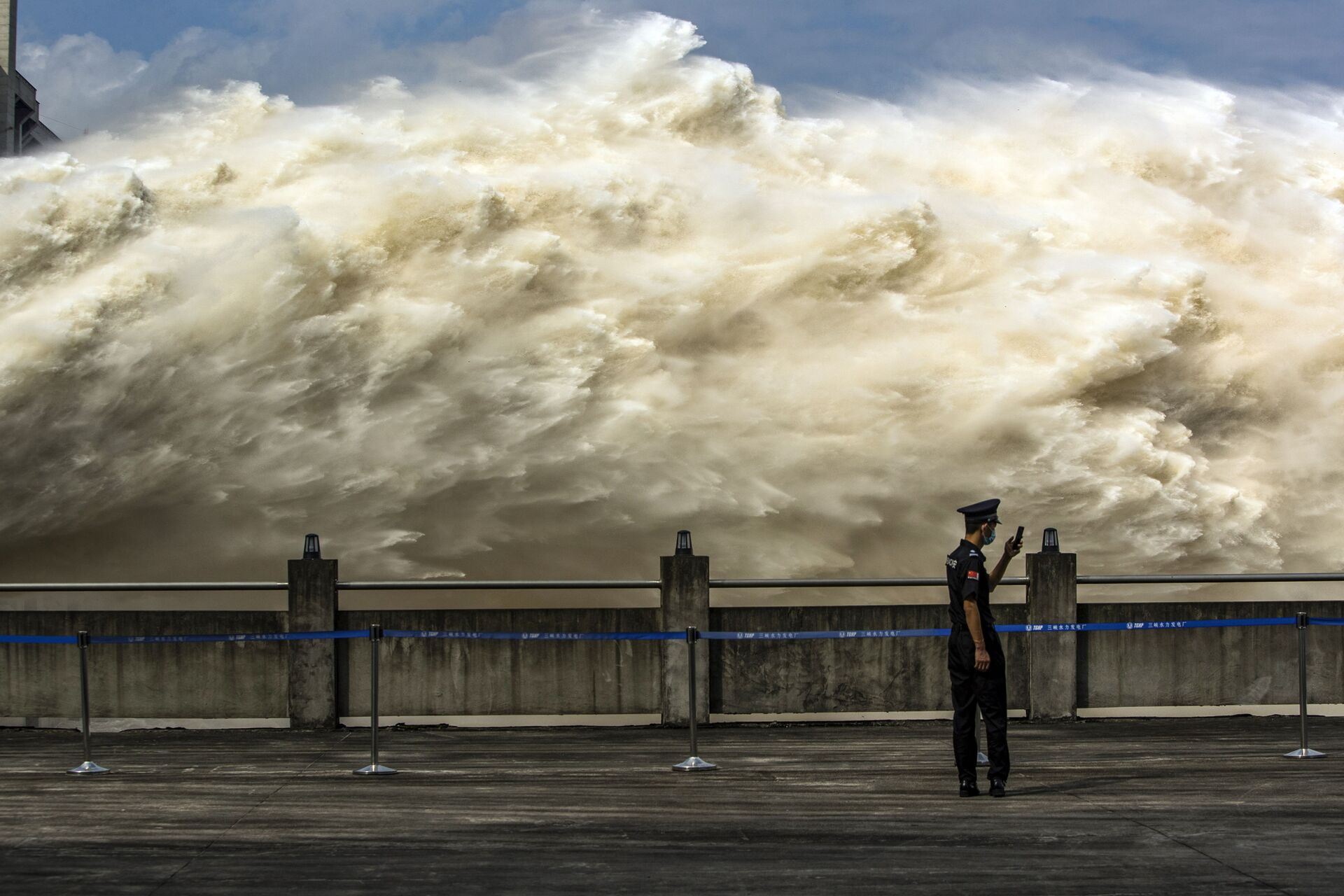 This photo taken on July 19, 2020, shows a security guard looking at his smartphone while water is released from the Three Gorges Dam, a gigantic hydropower project on the Yangtze river, to relieve flood pressure in Yichang, central China's Hubei province
© AFP 2022 / STR

Several teams of scientists and engineers have visited Sedongpu in recent times, collecting data to come up with solutions to the problem of the glacial lake. "The situation is very difficult. There is not an immediate solution yet," Xing Xiguo, a professor of civil engineering at the Shanghai Jiao Tong University, who was involved in one of the studies, told the Post.

What has become a matter of concern for the Super Dam project is not just the immediate problem of a glacial lake but the fact that similar disasters can likely happen again in the same area in the future as well.

The proposed dam, which China has claimed "has no parallel in history" will be built in Medog County, where the Brahmputra Grand Canyon is located. Medog is the county in Tibet which is located close to the Arunachal Pradesh border.

The Brahmaputra is the longest river in Tibet and its valley in southern Tibet is the world's deepest with a 7,000 drop from the highest mountain peak to the lowest basin.

The landslides that led to the formation of the lake are believed to have occurred in 2018. In an official report on the landslide, published in the journal Geology in China in 2019, Liu Chuanzheng, a government researcher with the Consultative Centre of Geohazard Mitigation under the natural resources ministry in Beijing said, "The development and utilisation of natural resources and energy in the Yarlung Tsangpo River must fully consider the situation of avalanches and debris flows in the Sedongpu valley."

Studies have found that increased melt water and rising temperatures could make 'the roof of the world' more habitable, with greater crop yields and advancing tree lines but the risk of natural disasters, including floods and landslides, also increased.

The image, over the #Sedongpu region, #China acquired of the based on data from the #Copernicus #Sentinel2 mission, shows the traces of ice/rock avalanches that occurred in 2017 and 2018, resulting from vast flows of rock and ice. See:https://t.co/9Pb7AP6eRu pic.twitter.com/up86h9DDb8

​At Sedongpu, the icy debris that formed the lake travelled more than 10 km with a top speed of 73 km/hr according to an estimate by the Tibet autonomous region's geological environmental monitoring station.