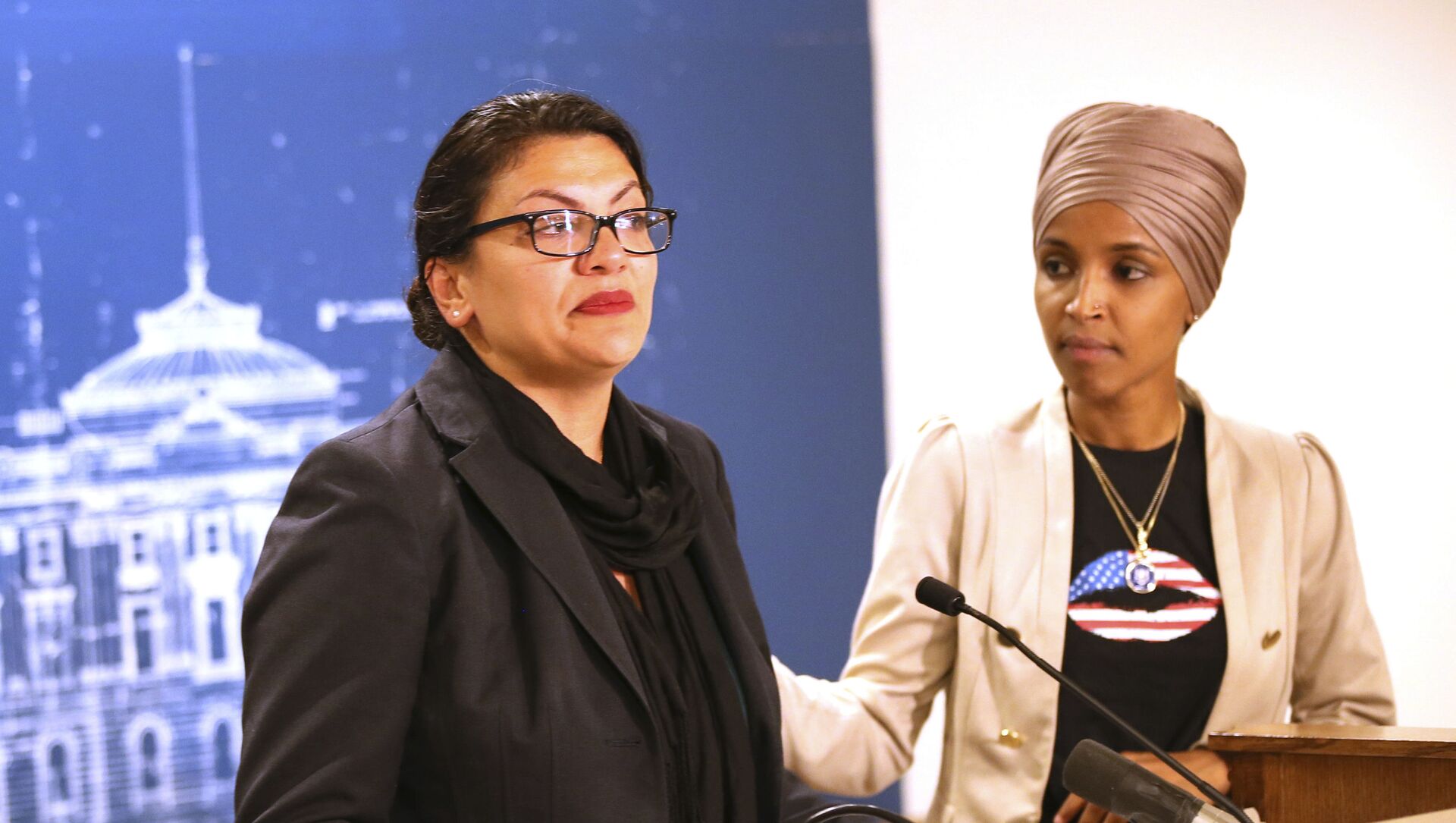 Morgan Artyukhina
All materialsWrite to the author
US Rep. Ilhan Omar (D-MN) is no stranger to pushback for criticizing Israel, having been accused of anti-Semitism by fellow lawmakers in 2019 after saying the American Israel Public Affairs Committee (AIPAC) uses financial influence to push a pro-Israel agenda in Congress - something the lobbyist group celebrates about itself.

After Israel began launching airstrikes in the Gaza Strip earlier this month in response to rocket launches from there, Omar was the first US lawmaker to raise her voice against the violence.

“Israeli air strikes killing civilians in Gaza is an act of terrorism,” she tweeted on May 10. “Palestinians deserve protection. Unlike Israel, missile defense programs, such as Iron Dome, don’t exist to protect Palestinian civilians. It’s unconscionable to not condemn these attacks on the week of Eid.”

Israeli air strikes killing civilians in Gaza is an act of terrorism.

It’s unconscionable to not condemn these attacks on the week of Eid. https://t.co/vWWQfMqBkT

​Her tweet was in response to a report that Gaza’s ministry of health had said that Israeli airstrikes had killed 20 people, nine of whom were children, and injured 65 others that day.

She’s not the only one, though: Omar was quickly joined by Rep. Rashida Tlaib (D-MI), a Palestinian-American woman and the only other Muslim in Congress, as well as by Reps. Alexandra Ocasio-Cortez (D-NY) and Andre Carson (D-IN). In response, AIPAC has launched a slew of new attack ads this week going after the lawmakers.

Tlaib, Omar and AOC each featured in AIPAC ads that began running on Facebook on Monday. “When Israel targets Hamas, Rep. Omar calls it ‘an act of terrorism.’ Sign if you stand with Israel,” one ad reads, with a link urging people to financially support AIPAC and to call their representatives and urge them to support Israel. Similar messages using quotes from the other lawmakers featured in other ads.

These attacks on @IlhanMN, @RashidaTlaib,& @AOC are an outrage, even for a group as deplorable as @AIPAC. These ads are Trump-like bigoted acts of incitement. AIPAC should be ashamed (if they even know the meaning of the word) & Democrats should let them know it & shun them. pic.twitter.com/xgNkzLt3p3

​Sen. Bernie Sanders (I-VT) has also been vocally critical of Israel’s Operation in Gaza, championing a bill by AOC that would block an imminent sale of smart bombs to Tel Aviv if it didn’t halt its bombing campaign in Gaza. High profile celebrity lawyer Alan Dershowitz also called Sanders a “self-hating Jew,” a common refrain from Zionists used against Jews critical of Israel, even if they are also supportive of Zionism, as Sanders is.

Isi Baehr-Breen, Omar's deputy communications director, told The Nation on Wednesday that "Given the number of threats of death and violence the congresswoman receives on a near-daily basis, it's not just irresponsible - it's incitement.”

During his failed re-election campaign, former US President Donald Trump commonly inveighed against Omar, suggesting if the Democrats won, they would open the immigration “floodgates” to Somali Muslims like her, inviting terrorists into the country. During the January 6 insurrection at the US Capitol that killed five people, Omar was reportedly one of several "progressive" Democrats, including AOC and others, for whom the right-wing insurrectionists were looking as they stormed the legislative building in an attempt to overturn the election.

Shame on @AIPAC. To launch such a blatantly Islamophobic attack on @Ilhan right now is reprehensible. I stand with her to oppose the violence Israel's apartheid government is perpetrating. You will not silence those who stand for human rights. pic.twitter.com/PoNnJLIO9r

​Tlaib fired back on Wednesday, saying that "to launch such a blatantly Islamophobic attack on Ilhan Omar right now is reprehensible. I stand with her to oppose the violence Israel's apartheid government is perpetrating. You will not silence those who stand for human rights."

Omar also denounced the attack ads, calling them “desperate and deeply offensive. The rights of Palestinians and all people yearning for freedom and self-determination will not be ignored and no level of harassment will silence me or the millions of people demanding peace and justice."

This is desperate and deeply offensive.

The rights of Palestinians and all people yearning for freedom and self-determination will not be ignored and no level of harassment will silence me or the millions of people demanding peace and justice. https://t.co/JK3I0xcAjz

​The Somali-American has long been on AIPAC’s bad side after she criticized the lobbyist group in 2019 for the powerful influence it exerts over US lawmakers, tweeting that for AIPAC, “it’s all about the Benjamins.” The line references an expression based on Benjamin Franklin’s visage appearing on the $100 bill that was made popular by a 1997 song by rapper Puff Daddy, but critics successfully argued it was anti-Semitic, due to Benjamin being a Hebrew name and there being a longstanding anti-Semitic trope that Jews are money-laden and corrupt.

In response to the pressure, House Democrats passed a resolution in March 2019 that broadly condemned bigotry against minorities, including both anti-Semitism and Islamophobia - a far cry from what Republicans demanded, which was nothing less than Omar’s removal from office. Even as recently as this past January, House GOP leaders threatened to purge Omar from her committee assignments if Democrats removed Rep. Marjorie Taylor Greene (R-GA) from hers in response to a series of inflammatory comments made by her, including sympathy for the Capitol insurrectionists.

Ceasefire After Hundreds Killed in Gaza

Late Thursday night, Israel’s security cabinet approved a ceasefire with Hamas due to begin early Friday morning. In the 11 days of violence, Israeli airstrikes and artillery fire have killed 232 Palestinians in Gaza, 65 of whom were children. On the Israeli side, 12 people, including two children, have been killed by rockets fired from the Gaza Strip, according to data collected by the UN Office for the Coordination of Humanitarian Affairs (UNOCHA).

The war began after weeks of violence centered on East Jerusalem that climaxed in Israeli police storming Al-Aqsa mosque, the third-holiest site in Islam, on May 7, the last Friday of Ramadan, reportedly injuring more than 200 worshipers and 17 Israeli police. The incident followed protests by Muslim worshipers at the Damascus Gate, which Israeli authorities had closed at the start of Ramadan in early April as a COVID-19 mitigating measure to disrupt pedestrian traffic into the old city. However, Muslims reportedly felt it unjustly discriminated against them by restricting access to the holy site.

During the same period, several instances of Israeli Arabs attacking religious Jews in the street and posting a video of the incident on social media prompted reciprocal acts in several Israeli cities, including Tel Aviv and Jaffa.

The Palestinian neighborhood of Sheikh Jarrah in East Jerusalem was at the same time another site of growing conflict. Israeli police heavily patrolled the streets for Palestinians protesters who vowed to defend the borough from Israelis who were storming people’s homes. Their actions anticipated and followed a May 2 court ruling widely expected to endorse the eviction of more than 70 Palestinians in six families in favor of claims by a Jewish settler organization that the land has belonged to them since 1972. The families have appealed to the Israeli Supreme Court, but the court has delayed its hearing of the case in light of the present conflict.