How Gazans Reacted to Israel-Hamas Ceasefire

Subscribe
The ceasefire comes amid an exchange of rocket fire between Hamas and the IDF that lasted for more than a week. Since the violence erupted, 12 Israelis have lost their lives, with 50 others seriously wounded. Palestinian casualties currently stand at 227 killed, including 64 children.

On 20 May, Benjamin Netanyahu's Security Cabinet unanimously adopted an Egyptian initiative for an unconditional bilateral ceasefire between Israel and Hamas, thus paving the way to end 11 days of military hostilities between the parties. Following the news, people in the Gaza Strip flocked to the streets to celebrate the ceasefire, launching fireworks, honking car horns, and marching through cities.

A new round of military hostilities started on 10 May, after Hamas launched hundreds of rockets towards Israel forcing the Israeli Defence Forces to respond with retaliatory strikes.

Violent clashes broke out earlier in May between Palestinians and the Israeli police, leading to the worst conflict in recent years. Riots began in two areas of East Jerusalem at once — near the Temple Mount and in the Sheikh Jarrah quarter, where several Arab families were evicted by an Israeli court order.

Check out Sputnik's photo gallery to learn more about the daily life of Palestinians amid the de-escalation of the Israeli-Palestinian conflict. 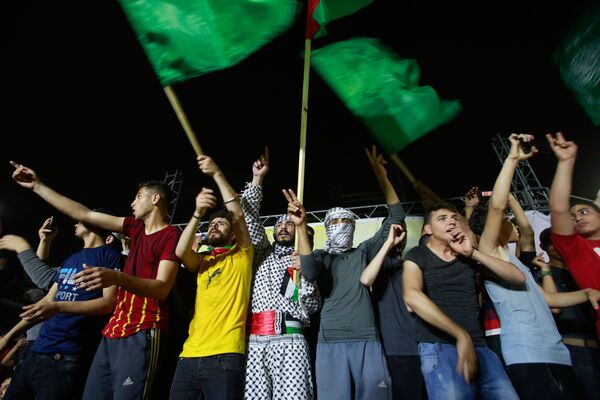 1/15
© Sputnik / Ahmed Zakot
/
Go to the photo bank
Palestinians celebrate the ceasefire brokered by Egypt between Israel and Hamas. 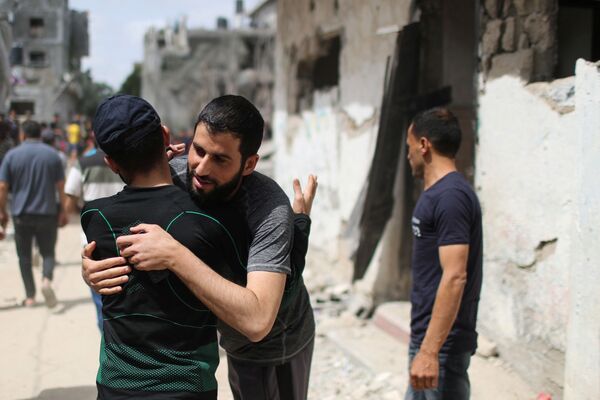 2/15
© REUTERS / Mohammed Salem
Palestinians hug each other after returning to their destroyed houses following the Israel-Hamas truce, in Beit Hanoun in the northern Gaza Strip. 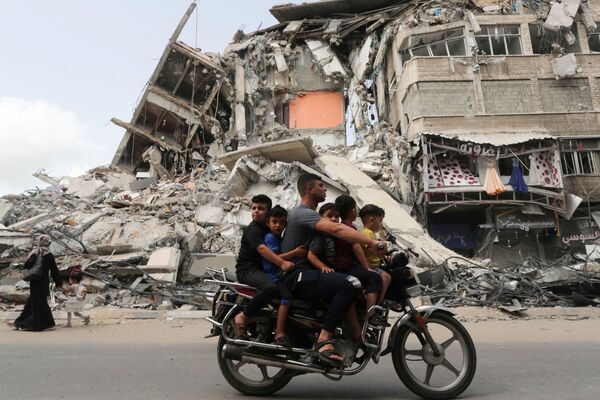 3/15
© REUTERS / Suhaib Salem
Palestinians ride a motorcycle past the site of an Israeli airstrike, following the Israel-Hamas truce. 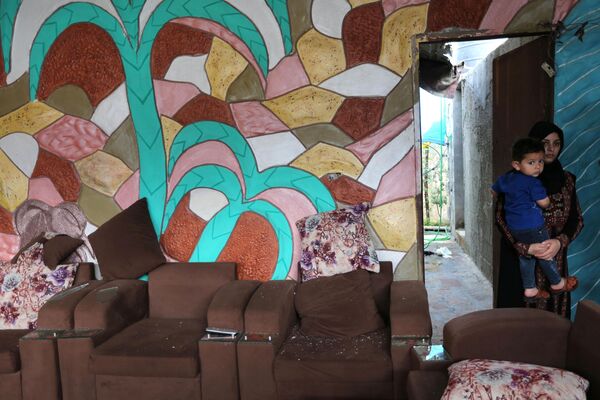 4/15
© REUTERS / Ibraheem Abu Mustafa
Palestinians, who took refuge in a United Nations-run school during the recent cross-border violence between Palestinian militants and Israel, return to their damaged home following the Israel-Hamas truce. 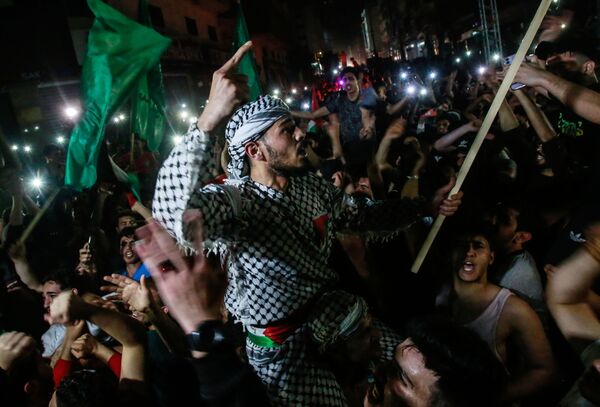 5/15
© Sputnik / Ahmed Zakot
/
Go to the photo bank
Palestinians celebrate the truce that came into effect at 2 a.m. local time. 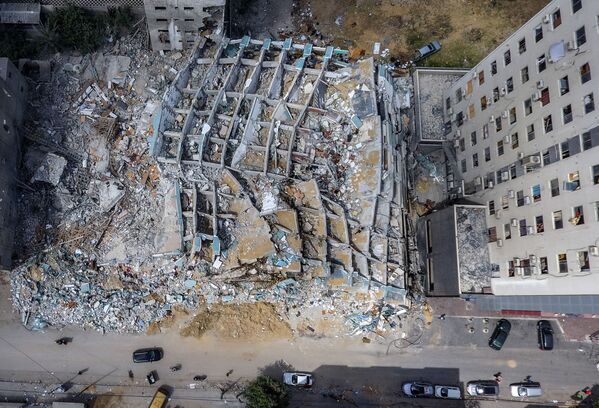 6/15
© AFP 2021 / Mahmud Hams
This aerial view shows the Al-Jalaa Tower in Gaza City that was levelled by an Israeli airstrike during the recent military conflict between Israel and the Palestinian enclave governed by Hamas, after the ceasefire brokered by Egypt. 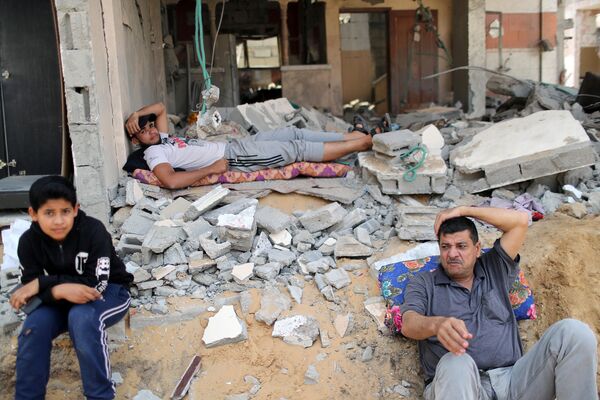 7/15
© REUTERS / Mahmud Hams
Palestinians rest after returning to their damaged house following the Israel-Hamas truce, in Beit Hanoun in the northern Gaza Strip. 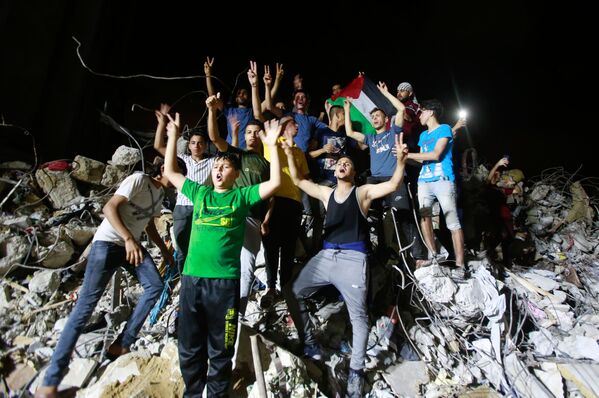 8/15
© Sputnik / Ahmed Zakot
/
Go to the photo bank
The ceasefire between Israel and Hamas, the Islamist movement that controls the Gaza Strip, comes after 11 days of deadly fighting that pounded the Palestinian enclave and forced countless Israelis to seek shelter from rockets. 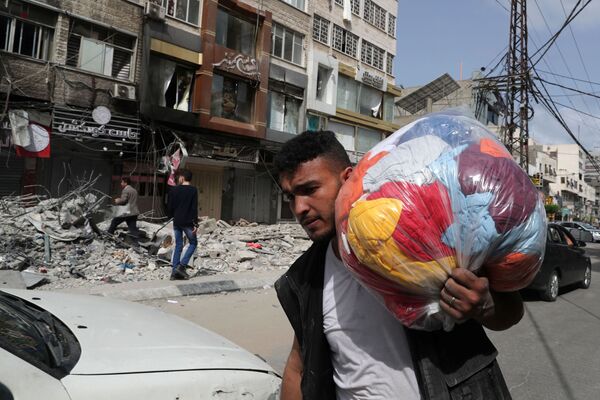 9/15
© REUTERS / Suhaib Salem
A Palestinian man walks past the damage caused by an Israeli airstrike carried out in the recent cross-border violence between Palestinian militants and Israel, in Gaza. 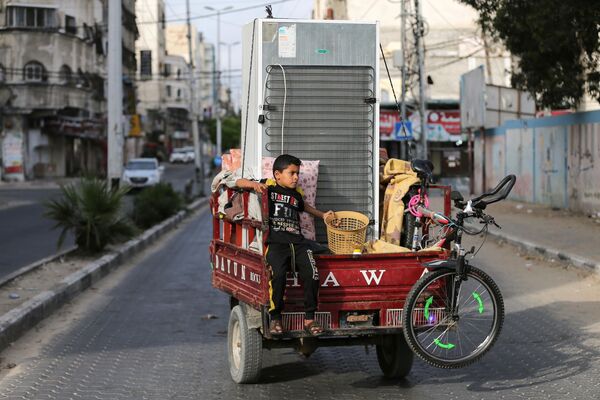 10/15
© REUTERS / Ibraheem Abu Mustafa
A Palestinian boy riding on an auto rickshaw loaded with his family's belongings heads to their home as he leaves a United Nations-run school where they took refuge during the recent cross-border violence between Palestinian militants and Israel, following the Israel-Hamas truce in Gaza. 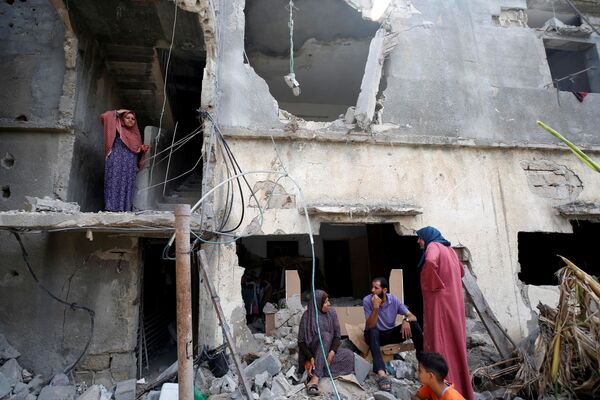 11/15
© REUTERS / Mohammed Salem
Palestinians sit on debris after returning to their destroyed house following the Israel-Hamas truce, in Beit Hanoun in the northern Gaza Strip. 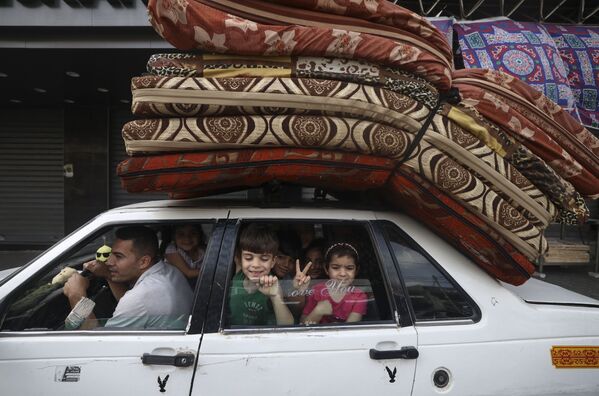 12/15
© AFP 2021 / Mahmud Hams
A Palestinian family returns to their house in Gaza City after the ceasefire between Israel and Hamas. 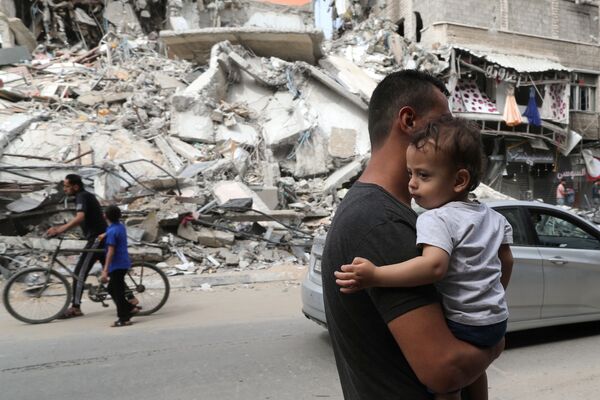 13/15
© REUTERS / Suhaib Salem
A Palestinian man carries a child as he walks past the ruins of a building destroyed in an Israeli airstrike in the recent cross-border violence between Hamas and Israel, in Gaza. 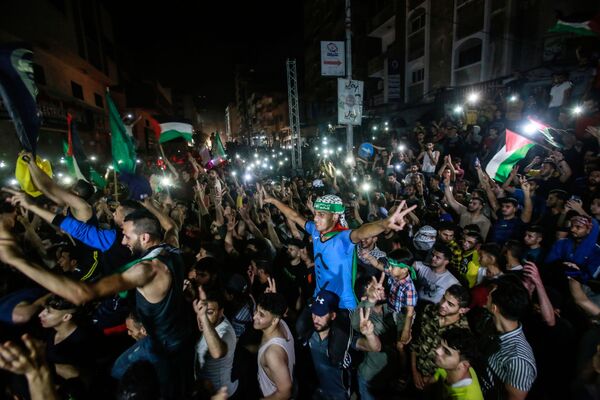 14/15
© Sputnik / Ahmed Zakot
/
Go to the photo bank
Hundreds of Palestinians flocked to the streets in the Gaza Strip to celebrate the ceasefire between Israel and Hamas. 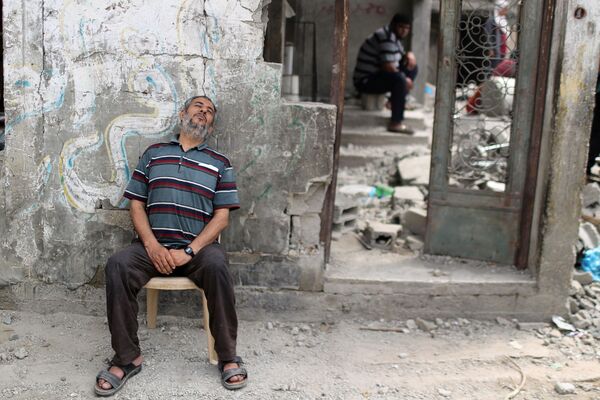 15/15
© REUTERS / Mohammed Salem
A Palestinian man rests after returning to his damaged house following the Israel-Hamas truce, in Beit Hanoun in the northern Gaza Strip.
000000
Popular comments
These pictures are heart-breaking....for how long must that unjust situation go on....the world does not really want to help solve the problems. Have you dear reader, taken care to look at these pictures, one by one, and put yourself in the Palestinians' shoes ?...
armor
21 May, 22:07 GMT4
000000
Fake Jew semites killing Palestinian, genuine Semites. Boris the Zionist Buffoon Johnson with the 7 children, thinks the Zionist Jew has the anti semite copyrights. Say a word wrong Johnson screams anti Semite. Murder a Palestine child semite & not a word said. A man of many faces.