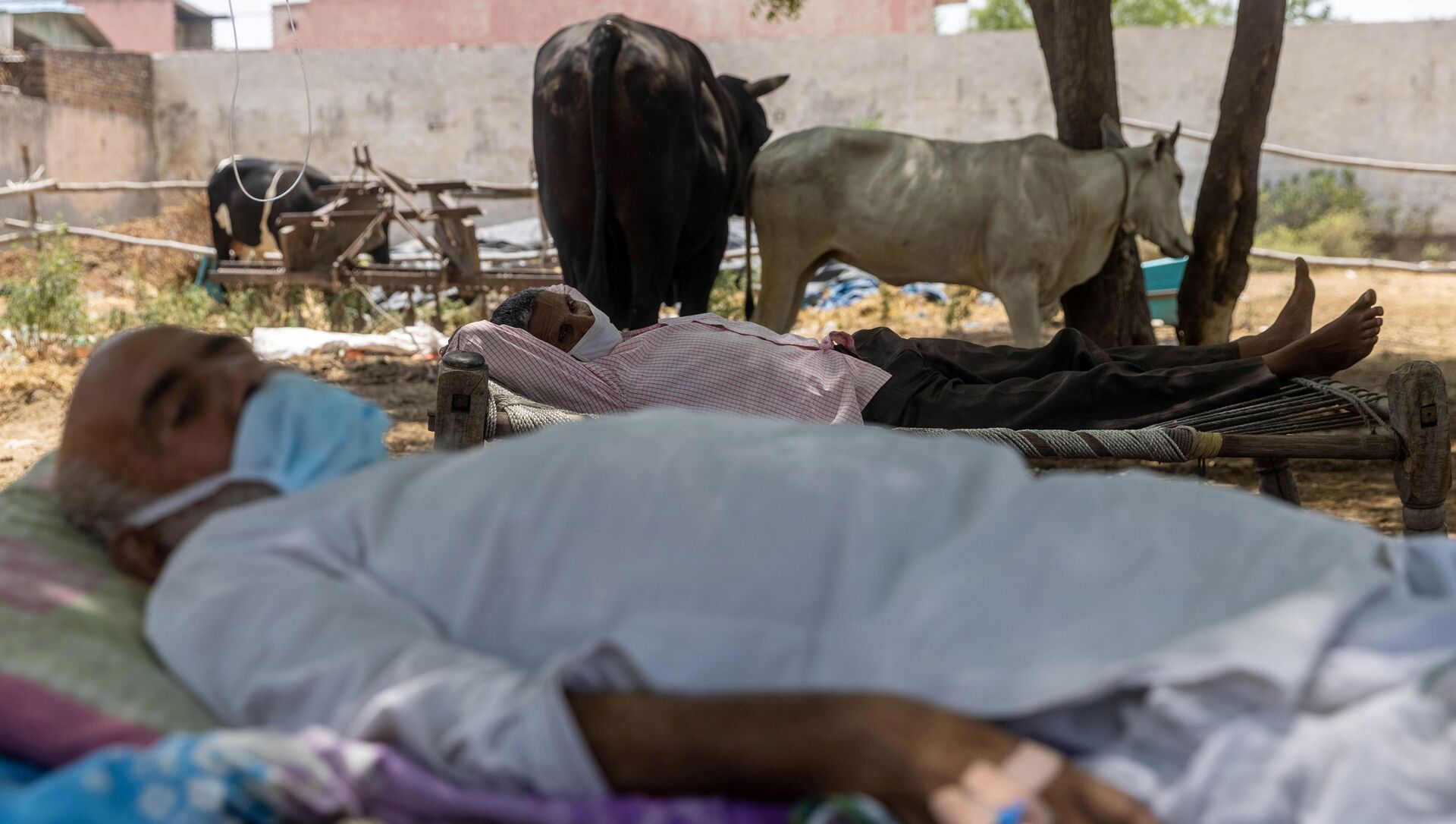 Deexa Khanduri
Sputnik correspondent
All materials
At a time when India is battling the world's worst Covid-19 surge, and the pandemic now reaching rural parts of the country, federal and state governments are blaming each other for mismanagement and the rapid spread of the deadly outbreak.

Indian Prime Minister Narendra Modi has planned a series of meetings with state government officials in the next few days to take stock of the coronavirus situation, as infections spread into rural parts of the country. The federal government said on Monday that it continues to help states under a ‘whole of government’ approach to slow the spread of the pandemic.

Despite the claims made by the federal government, the country's healthcare system has collapsed, and Indians are in desperate need of hospital beds, oxygen and even basic facilities.

Additionally, there is reportedly no space to bury or cremate the dead, as crematoriums are at capacity. The federal health ministry has refused to accept its responsibility in not supplying adequate oxygen or vaccinations. Sputnik spoke with leading opposition parties and state governments on the coordination between the federal government, led by Narendra Modi, and states as the pandemic rages.

India's southern state of Maharashtra was the first state in the country to impose a lockdown when the second wave hit. It has so far been the worst hit by the pandemic among states, contributing about a quarter of the country's total infection.

"Our state was reporting the highest number of Covid-19 cases (in April), but we managed, and today even Supreme Court has praised us," Nawab Malik, a senior minister in the Maharashtra government, says.

"At this hour, the federal government is responsible for providing all the primary resources, including medical oxygen, Covid-19 vaccines, and even a few live-saving medicines. But, its supply keeps going in a disrupted way. For two days, we get proper supply and then no communication from Narendra Modi's government ends," Malik says, highlighting allegations of mismanagement by the federal government.

Malik also feels that in the middle of a severe crisis, the federal government is creating chaos.

"We were the first state in the country to announce a lockdown. At that time, the BJP leader criticised us. If you can't support us at the hour of crisis, then please don't criticise us or complicate the matter."

The country's biggest city and financial capital, Mumbai, halted all vaccinations because it ran out of doses.

Punjab Health Minister Balbir Sidhu says that they are in contact with the federal health ministry on a daily basis, receiving "assurance" but no "proper dates on when the state will receive the vaccine."

"We are currently facing an acute shortage of vaccines. Now, when people have realised that the only way to safeguard themselves against COVID-19 is the vaccine, they want to get inoculated. But, we don't have vaccines," Sidhu says.

"As a state government, we can only add beds and hospital staff in the hospitals, but what about life-saving medicines and medical oxygen? That has to be provided by the Modi government," the state health minister adds.

Congress leader Jaiveer Shergill feels that the first and foremost thing that the country's authorities must do is to acknowledge the situation: "BJP government needs to wake up to the reality and understand the gravity of the situation. Today, despite hundreds of thousands dead, the government is in denial mode about the spread of the disease, scarcity of oxygen, and vaccines."

He also slams the Modi government for exporting over 65 million doses of the vaccine doses to other countries, when India in desperate need, only months after Modi boasted to global leaders at the World Economic Forum that his nation had triumphed over the pandemic.

"They behaved like a closed eye pigeon thinking the cat had run away. But, that's not the reality," Jaiveer Shergill says.

Political bickering between the Aam Aadmi Party (AAP) and the Modi government went public earlier this month as state chief Arvind Kejriwal did a live telecast of a closed-door meeting with the Indian Prime Minister and other state chiefs. As number of new cases climbed to 25,000 in a day, Delhi faced an acute shortage of oxygen and hospital beds in April. People died on roads, waiting for treatment outside hospitals.

"We are forced to close down a few vaccination centres, and on a daily basis, we are trying to reach out to the federal health ministry, but there is no clarity from them," he adds.

Calling the outbreak of Covid-19 as “apocalyptic human tragedy,” last week, twelve major opposition parties wrote to Modi demanding that the Centre take immediate action as a ferocious second wave of the Covid-19 pandemic rips through the country. Opposition parties have suggested a series of measures that include the distribution of free vaccines, a stop to the Central Vista project, and a quick repeal of the new and unpopular farm laws.

"We have repeatedly in the past drawn your attention, independently and jointly, to the various measures that are absolutely imperative for the Central government to undertake and implement. Unfortunately, your government (Narendra Modi government) has either ignored or refused all these suggestions. This only compounded the situation to reach such an apocalyptic human tragedy," the letter read.