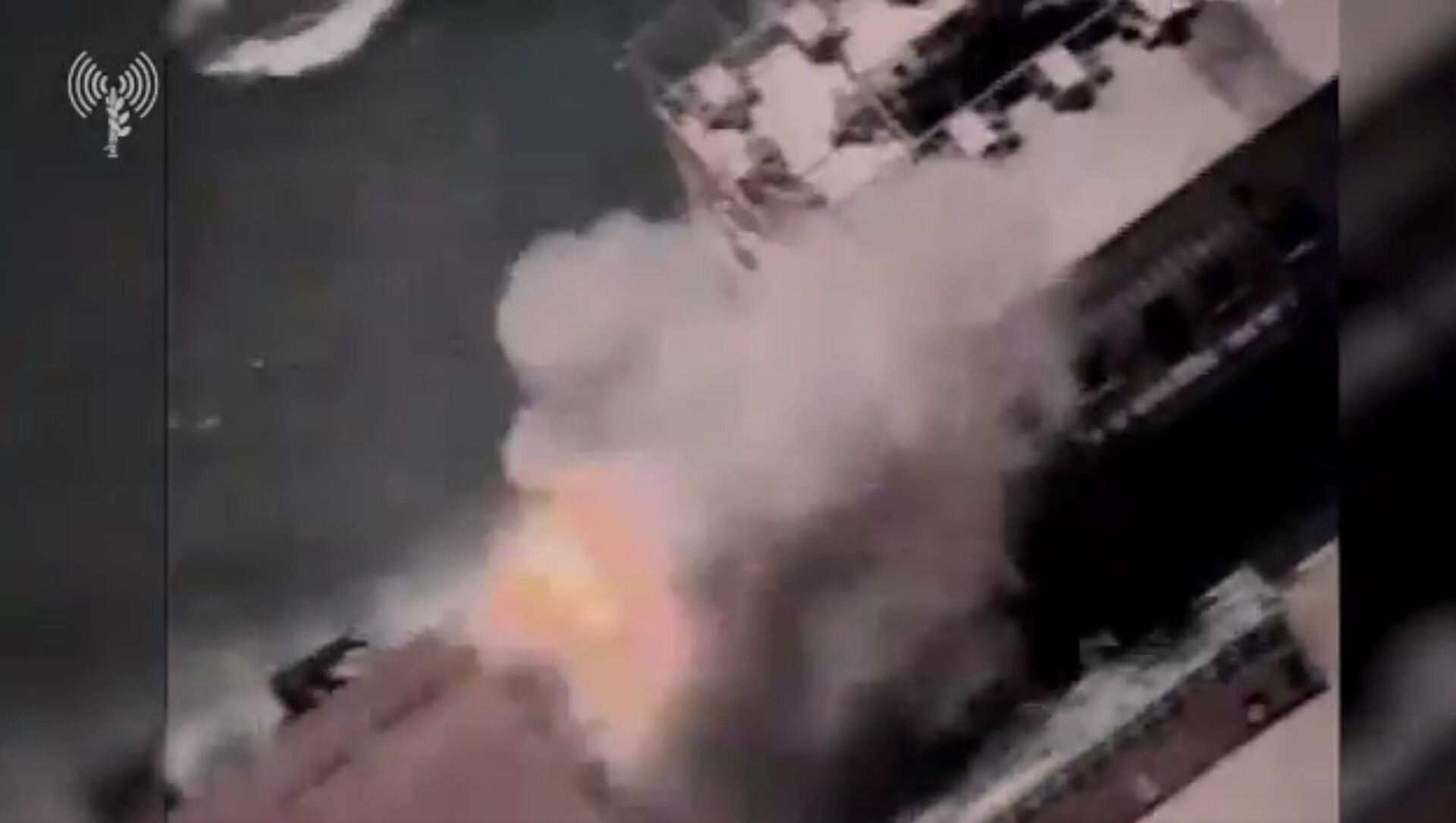 Ilya Tsukanov
All materialsWrite to the author
The conflict between the Israel Defence Force (IDF) and Hamas militants entered its second week on Monday. The past seven days have seen the militant group firing hundreds of rockets into Israel, and the IDF launching hundreds of airstrikes inside the beseiged enclave.

The Israeli Air Force and Navy have attacked a Hamas submarine off the coast of Gaza, the IDF said in a statement on Monday.

"Today, using aerial reconnaisance and the Navy, the IDF spotted several suspects on a vessel believed to be a Hamas submersible weapon. The vessel was being taken to the coast, presumably to carry out a terror attack in Israeli waters. Some time ago, an Israeli Navy warship and aircraft carried out strikes against the vessel's operators and the weapon itself to eliminate the threat," the military said.

The IDF released footage showing the destruction of an "unmanned diver vessel" in the northern Gaza Strip, with the footage said to be filmed Monday.

The footage shows a fireball engulfing a coastal area between two coastal buildings, although no objects resembling a 'submarine' are visible. The second part of the video shows a moving car being destroyed while traveling on a road in a built-up area. Its occupant(s) were not identified.

Monday's strikes follow the release of videos late last week showing IDF attacks on Hamas naval forces, including vessels, weapons warehouses, coastal observation posts and military compounds. Those videos showed missile cam footage of projectiles flying toward buildings on the coast of the Mediterranean Sea. Sputnik could not independently confirm that the facilities hit were military-related.

Hamas established self-rule in Gaza in 2007 in the wake of a schism with Fatah, with led to a split of the Palestinian Authority. As a non-state entity with limited resources and under blockade, the political and militant group is not known to have a proper navy, but does have an elite frogmen commando force, small boats and coastal facilities, as well as rockets and anti-tank missiles which have been used to attack Israeli ships. It is not believed to be armed with 'submarines', with the possible exception of diver propulsion vehicles. Even the much stronger and far better equipped Lebanese militant group Hezbollah is not confirmed to have submersibles.

World
Live Updates: Netanyahu Orders IDF to 'Continue Striking at the Terrorist Targets' in Gaza
Earlier this year, the IDF estimated that Hamas's naval wing has as many as 400 frogmen commandos trained to conduct sabotage attacks against Israel. Tel Aviv first found out about the commandos' existence during the 2014 Gaza War, during which time they reportedly made a failed attempt to infiltrate Israel by sea.

The latest round of violence between Israel and Hamas began last Monday, when the militant group began firing volleys of rockets into Israel from Gaza amid raging tensions between Jews and Palestinians over a series of grievances by the latter - including restrictions to access to the Old City of Jerusalem, the Israeli police storming of the Al-Aqsa Mosque, and an anticipated ruling by the Israeli Supreme Court to order the eviction of Palestinian families from homes in East Jerusalem.

As of Sunday, over 2,800 rockets were launched into Israel by Hamas and other militants in Gaza, with most of them intercepted, but some hitting residential areas, causing injuries among civilians and property damage. The Israeli military has been carrying out hundreds of air and missile strikes into the enclave, ostensibly targeting Hamas militants and their facilities, but also hitting residential areas and commercial and police buildings.

The recent spate of violence across Israel, the West Bank, East Jerusalem and Gaza has claimed over 200 lives. This includes nine Israeli civilians (two of them Arab-Israelis) and one Israeli soldier inside Israel, 18 Palestinians in the West Bank and East Jerusalem, and 197 civilians, among them at least 20 militants, in Gaza.