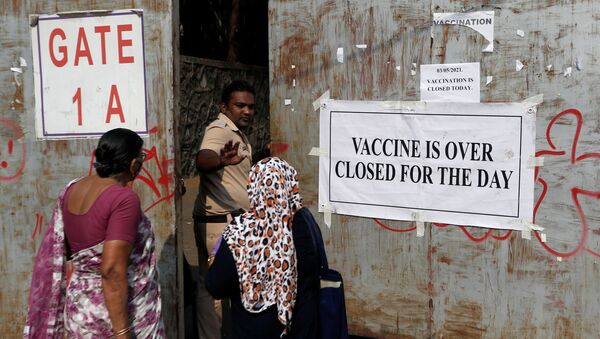 The death toll from the coronavirus infection in the world topped 3.36 million, and over 162 million cases were detected, as of Sunday, according to Baltimore, Maryland's Johns Hopkins University, which tracks and compiles data from national and local authorities, the media and other sources.

Most countries are actively pursuing the immunisation process. The Seychelles ranks first in terms of the percentage of vaccinated people with 62.85%, Israel ranks second with 56.28% and San Marino ranks third with 47.16%, followed by Chile with 39.36%, and the United Arab Emirates with 39.27%.

MOSCOW (Sputnik) - Algeria will begin to partially reopen its land and air borders with foreign nations — closed due to the coronavirus pandemic — starting from June, the presidential office announced on Sunday.

The decision was made during a cabinet meeting earlier on Sunday. The government agreed to the partial reopening of the borders, provided for the number of flights from and to Algerian airports will be limited.

Twenty percent of Russian citizens are ready to undergo COVID-19 vaccination only if it becomes a prerequisite for travel abroad, a poll by the SuperJob job search service showed on Sunday.

The findings established that 20% of respondents would take a COVID-19 shot to be able to travel abroad and 18% said they planned to get vaccinated anyway. Another 42% said that they did not want to get vaccinated under any conditions and 20% were undecided.

Male respondents more often than female expressed readiness to get vaccinated, both for going abroad — 21% and 18%, respectively — and regardless of the possibility to travel  — 20% and 16%, respectively.

The survey was conducted from May 13-14 among 1,600 non-vaccinated adults in Russia.

Nearly 60% of Japanese citizens are in favour of cancelling the Tokyo-hosted Olympic and Paralympic Games this summer over COVID-19, a public opinion poll by Japan's Kyodo news agency showed on Sunday.

Only 12.6% of respondents spoke in favour of holding the Games, but with a limited number of spectators, while 25.2% preferred stands completely empty.

A similar Kyodo poll from 7-9 May had 59% of respondents speak in favour of cancelling the Olympics.

The fresh survey was conducted from May 15-16. Information on the sample size and the margin of error was not released. It is noted that this time respondents were not given the option to say that the government "should move the event."

The Japanese public is largely opposed to hosting the Olympic Games this summer due to low vaccination rates, a surge in the number of new COVID-19 cases and shortages of hospital beds.

In Osaka, one of the most affected cities, with the infection rate from 800-1000 people per day, hospitals have been unable to accommodate all patients in serious or moderate conditions. Over the past several weeks, more than 90% of all 356 hospital beds available in COVID-19 intensive care units have been constantly occupied. Mortality rates grew, too.

Despite public opposition, Tokyo held a ceremony on Sunday to mark the 100-day countdown to the start of the Paralympic Games, during which the organizers advocated "successful and safe games."

"With the sharp increase in the number of community cases, including the spike in unlinked cases today, there is a need to reduce interactions and avoid the risk of large clusters," the education ministry said in a statement on Sunday.

Some 85% of the Japanese think that the rate at which COVID-19 vaccination is progressing in the country is slow, a public opinion poll by Japan's Kyodo news agency showed on Sunday.

The findings showed that 71.5% of respondents were dissatisfied with the government's actions aimed at containing the pandemic, while 90.3% said that they were concerned about new mutations of the virus.

The study was conducted from 15-16 May. The agency did not specify the sample size and the margin of error.

The vaccine rollout began in Japan on 17 February. The first phase covered 4.7 million healthcare workers. Starting from 12 April, the country has been administering shots to those over 65 years old. A total of 36 million seniors are scheduled to be vaccinated during this stage.

Pfizer's is the only COVID-19 vaccine approved for the use in Japan so far.

The incident happened on 13 May in a nursing home in the city of Toyohashi, the agency said. The vaccinations were reportedly scheduled to be administered in the cafeteria area of the facility, where 10 patients got their shots. However, later the doctors decided to attend to each person in their private rooms.

According to the news agency, the doctors did not verify patients' identities during the rounds. As a result, an 80-year-old woman received two doses in one day: one in the cafeteria and one in her room.

A medical team has been constantly monitoring the woman's health since the mishap. No side effects have yet been detected.

Moscow recorded the largest number of new cases with 2,789 new infections, St. Petersburg the second largest with 767, and the Moscow region the third with 672.

Over the past 24 hours, 391 deaths linked to the coronavirus were confirmed. As a result, 115,871 coronavirus deaths have been recorded in the country since the start of the pandemic.

In the same 24 hours, 8,573 people have been discharged from hospitals as recovered across the country.

Lockdown in India's capital was extended until May 24 as the country continues to struggle with the new COViD-19 wave, marking the fourth time that the New Delhi authorities refrain from lifting the restrictions, Chief Minister Arvind Kejriwal announced on Sunday.

"We see good recovery from the quarantine. The number of coronavirus cases is decreasing. We do not want to lose what we have achieved in the last few days. We are extending the lockdown for one more week. Instead of tomorrow, the lockdown in Delhi is will last until next Monday, 5 am," Kejriwal said at a briefing.

The number of new cases in India has been on the rise since mid-February, bringing the toll to over 24 million cases, including over 3.6 million active cases, as of Sunday. For several weeks, Delhi has been one of the most affected Indian states with 6,400 infections a day and over 66,000 people in treatment.

The lockdown was first announced in the city on 19 April. All private companies were ordered to work remotely; restaurants, non-food stores and shopping centers were closed; mass gatherings and events were banned and the number of passengers on public transport was limited. A 10 p.m. to 5 a.m. curfew was imposed.