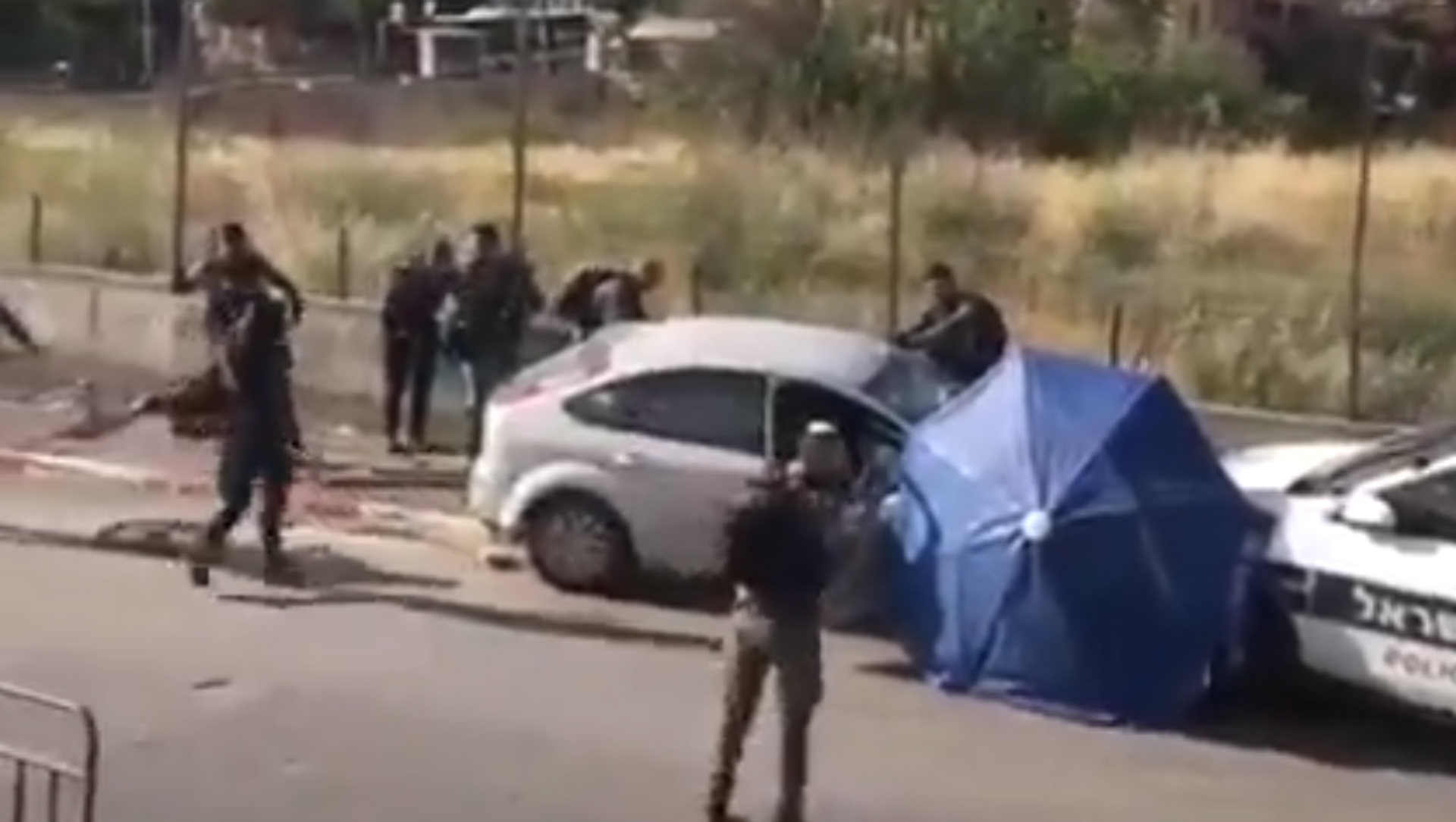 Ilya Tsukanov
All materialsWrite to the author
The incident comes amid a surge in tensions that have escalated into widespread violence between Jews and Palestinians this week over the Israeli authorities' attempts to restrict access to a key Islamic holy site, and in anticipation of a Supreme Court ruling to kick Palestinian families out of their homes in East Jerusalem.

A Palestinian man has been shot after ramming his car into border police in the Sheikh Jarrah neighbourhood of East Jerusalem. Conflicting reports suggest that between four and six officers were injured in the attack.

Footage shows heavily-armed officers in riot gear at the scene.

More images appear to show the soldiers aiming their guns at the driver while attempting to pull him out of the car, before shooting him at point blank range. Police confirmed in a statement that the assailant was "shot by officers," without giving details on his condition. Arabic-language media suggest he died of his injuries at the scene.

I saw two people carried away on stretchers, a man lying on the road beside a car. pic.twitter.com/wYWj2N6pOw

The incident comes amid a surge of violence witnessed across Israel over a series of grievances by Palestinians against the Israeli government, including restricting access to the Old City of Jerusalem, police storming the Al-Aqsa Mosque, a major Islamic holy site, and plans by the Israeli Supreme Court to rule on the possible eviction of Palestinian families from their homes in Sheikh Jarrah and their replacement with Jewish tenants.

Israeli Envoy to US Lauds Biden's ‘Strong Message’ in Support of Israel’s ‘Right to Defend Itself’
The conflict sparked a series of violent riots, with crowds of Palestinian-Israeils setting cars on fire, fighting with police, and vandalising or torching at least four synagogues in the city of Lod. The Netanyahu government has declared a state of emergency and deployed border police forces in multiple cities. On Monday, Hamas responded to the occupation of Al-Aqsa by firing 150 rockets into Israel from Gaza, with the Israeli military responding by launching air and missile strikes into the besieged enclave. The two sides have since lobbed hundreds of rockets and missiles into one another's territory.

Nine civilians in Israel, including two Arab-Israelis, and a soldier have been killed in the violence and rocket strikes. In Gaza, health authorities indicated on Sunday that 174 people had been killed in the Israeli air attacks, the vast majority of them civilians. 18 civilians in East Jerusalem and the occupied West Bank have also died. Hundreds of civilians, police, and militants have been injured in the fighting.

A separate incident involving police and a vehicle took place in Sheikh Jarrah on Saturday, with Israeli troops spotted trying to drag a woman accompanied by her children out of her car. The cause of that incident is unclear.

📹 An Israeli soldier attacked Jerusalem in her car, accompanied by her children, in the Sheikh Jarrah neighborhood of occupied Jerusalem https://t.co/YnttEESzuA