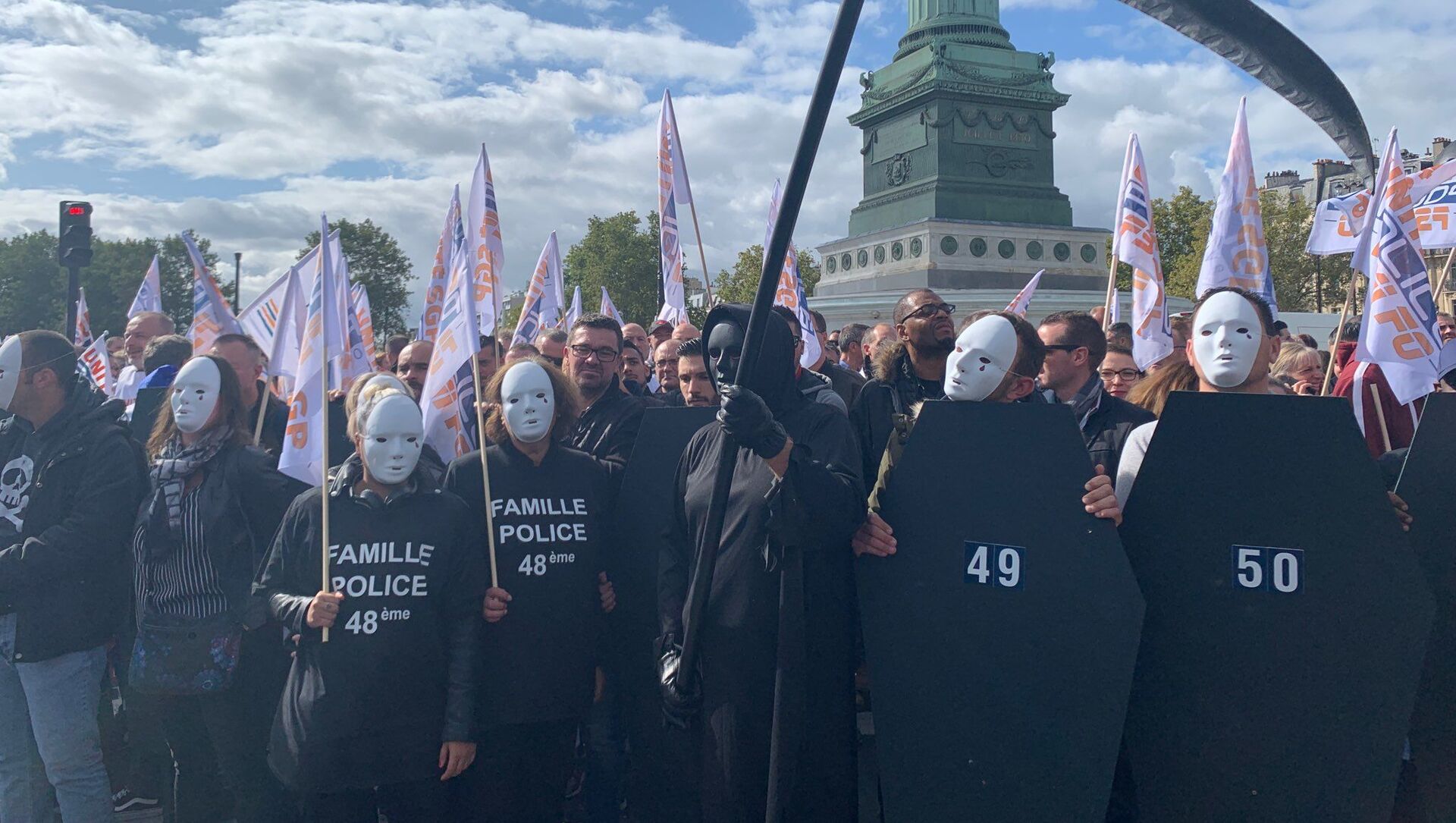 Ilya Tsukanov
All materialsWrite to the author
In April, a French news magazine published a letter signed by over 1,200 military personnel, among them 20 prominent retired generals, warning that radical ideologies and religious extremism could cause a civil war and the disintegration of France. In a new letter last Sunday, servicemen again warned of a civil war danger and urged Paris to act.

A group of retired French police officers has issued a new open letter to President Emmanuel Macron, Prime Minister Jean Castex, and the French Senate demanding safety for law enforcement and security for the citizens of France in general.

The petition, published on MesOpinions.com, a French petitions and surveys portal, was penned by 93 retired police officers, and solemnly asks the government “to do everything possible to put an end to the extremely serious situation that France is going through in matters of security and public tranquility.”

Signed by over 36,000 people, the petition suggests that the authority of the French state is being “undermined by violent minorities,” and that there are “lost territories” in France in which the laws of the Republic no longer apply.

“The police and gendarmes are the peacekeepers and protectors of our institutions. They are the keystone of all of our freedoms. Without security, there are no freedoms,” the appeal argues.

Police in French Metz Detain Knife-Wielding Schoolboy Who Threatened to Kill Teacher, Report Says
The letter points to what it says is a surge in attacks and violence against law enforcement, suggesting that they “demonstrate a rejection of our republican values, our customs and our model of society across entire sections of our nation.” It points to last week’s incident in Avignon, southeast France, in which a police officer was shot and killed during a drug raid.

“Open attacks on police stations by hordes of armed and hooded individuals are spreading across our nation with impunity, violence against individuals spreads even into the privacy of family residences, and the only response to these crimes against law enforcement consists of compassionate incantations which have no effect on the daily life of the French people,” the appeal suggests.

The letter demands that police be equipped “materially, morally, and legally” to enable them to carry out their duties without having to risk their lives “on every street corner,” and complains that today, law enforcement is facing pressure not just from criminals, but from part of the population, some politicians, their top brass, magistrates, and prefects. It calls for a reform of the legal system to ensure that sentences coincide with the seriousness of crimes committed.

“The emergency also requires controlling illegal immigration, which plagues many neighbourhoods and contributes to fuelling disorder and delinquency,” the letter argues.

“It is time to take effective action to reclaim our own country and restore state authority wherever it fails. It is time to ensure that France’s values are respected and to no longer accept the unacceptable. It is time to react,” the letter says. “France must not fall into chaos…We hope that our call for a national surge will be heard by public authorities, and we join our voices to those of our military comrades, who spoke first,” it concludes.

The new appeal follows a letter published by Valeurs Actuelles on Sunday from active-duty French military officers expressing support for the 21 April letter by a 1,200+ strong group of current and former military officers, including 20 retired generals, warning that France was “in peril” from “several mortal dangers facing her.”

The original letter suggested that the country was at risk of a “racial war” and claimed there were elements in French society who “despise our country, its traditions, its culture, and want to see it dissolve by tearing away at its past and its history.” It went on to warn that “Islamism and the suburban hordes” had caused parts of France to effectively detach from French jurisdiction and to be subjected “to dogmas that are contrary to our constitution.” The appeal threatened that if nothing was done, the military would intervene “to protect our civilisational values and safeguard our compatriots.”

The new letter by the military similarly warned that a “civil war” was “brewing in France” and that the authorities were aware of it.

French Interior Minister Mocks Rising Number of Signatures Under New Military Letter
However, the French military's top brass has rejected the “brewing civil war” claims, while Interior Minister Gerald Darmanin scoffed at the growing number of signatories to the second military letter, calling the appeal “not serious.” French Army Chief of Staff Gen. Francois Lecointre hinted this week that those active duty soldiers who signed the new appeal should resign. The military also previously threatened to “sanction” troops who signed the original letter.
Newsfeed
0
Access to the chat has been blocked for violating the rules . You will be able to participate again through:∞. If you do not agree with the blocking, please use the feedback form
The discussion is closed. You can participate in the discussion within 24 hours after the publication of the article.
To participate in the discussion
log in or register
loader
Chats
Заголовок открываемого материала