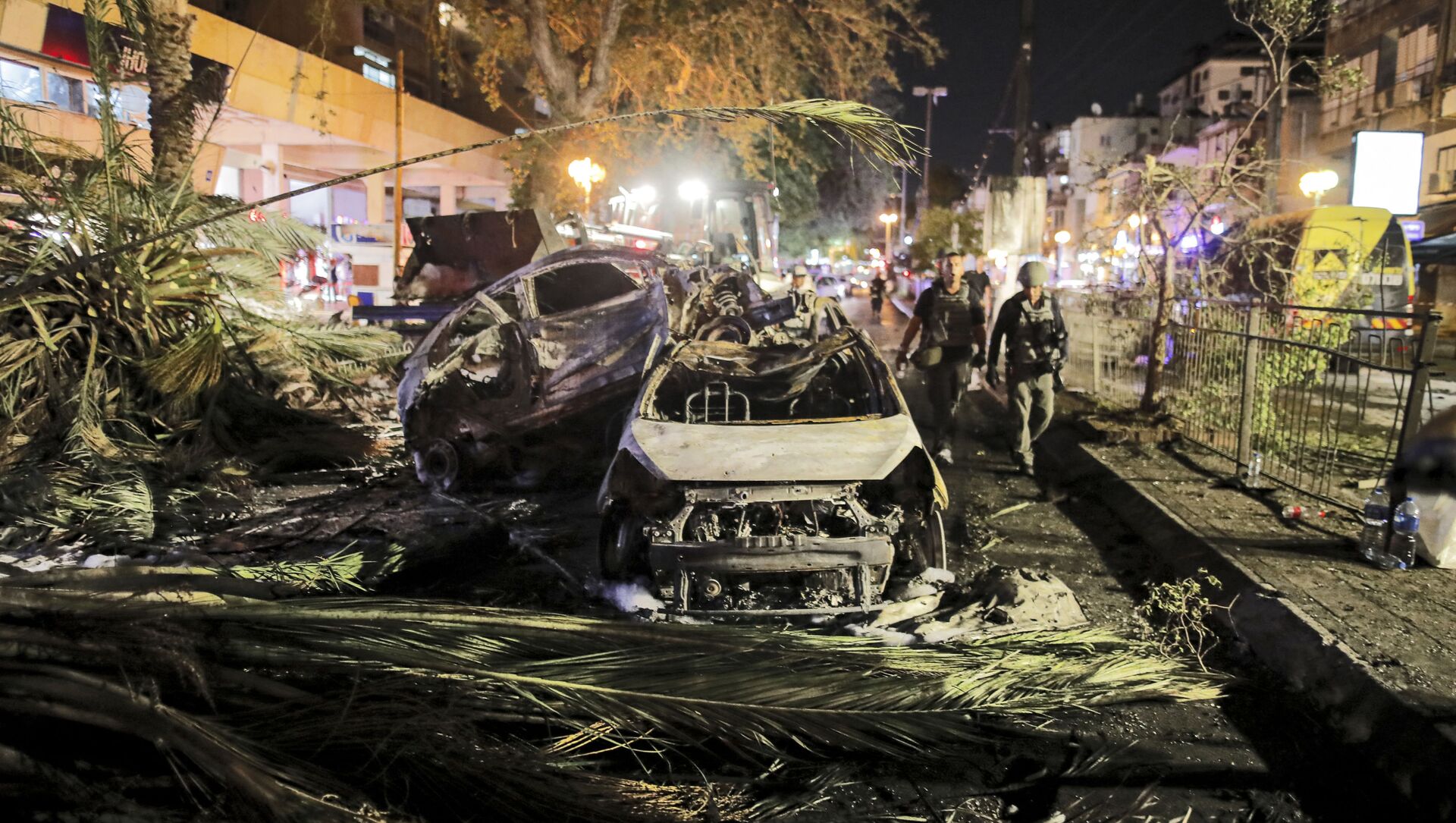 Ilya Tsukanov
All materialsWrite to the author
The Gaza-based Palestinian militant group began firing rockets into Israel on Monday, just minutes after the passing of a deadline for its demand that Israeli forces be removed from around the Al-Aqsa Mosque complex. The Israeli military responded with a wave of missile strikes aimed at Gaza, and has threatened an outright invasion.

The Hamas strategy against Israel revolves around the principle of retaliation for every Israeli attack on the besieged Gaza Strip, a senior representative for the group has said.

“The Resistance Front has managed to implement an equation in the current round of confrontation with the theme of ‘shelling for shelling, city for city and missile for missile,” Hamas spokesman Fawzi Barhoum said, speaking to Iran’s Tasnim News Agency.

The spokesman added that that equation had already “proven that Tel Aviv would be fired upon in case Gaza was bombed, and that the destruction of homes [in Gaza] would be responded to in kind.” He also suggested that Israel had suffered a blow “unprecedented” in its severity on Monday with the launch of 150 Hamas rockets in a three minute window.

Barhoum stressed that Hamas would not be intimidated by Israel’s threats to launch a ground invasion, and to turn the conflict into a long war. “We are ready to continue the battle no matter how long it will take,” he warned. He added that the Israeli government would not be able to achieve any of its goals, and would be forced to turn to other countries to help broker a ceasefire with Hamas, just as it did in 2012 and 2014.

“We have had contacts with Egypt, Qatar and the United Nations; but we told them clearly that we reserve the right to safeguard our homeland, and that any mediator must force the Zionists to stop their aggression against Jerusalem as well as other parts of our lands,” he said.

Israeli Media Reveals When to Expect Ceasefire With Gaza
Barhoum suggested that unpleasant “surprises” would await Israel if the war continues, and pointed to Hamas attacks in depth, “and against the centres and sensitive points of this regime.” He warned that “if the enemy launches a ground attack on the Gaza Strip, it will be a real opportunity for the resistance to kill the enemy army. The occupiers must know that the equation has changed today, and that those who attack any Palestinian child from Rafah to Jerusalem will be held accountable by the resistance.”

After launching its retaliatory strikes on Gaza, Israel Defence Forces spokesman Jonathan Conricus said that the military did not anticipate the Hamas attacks, and “thought we had communicated clearly what the consequences would be.” 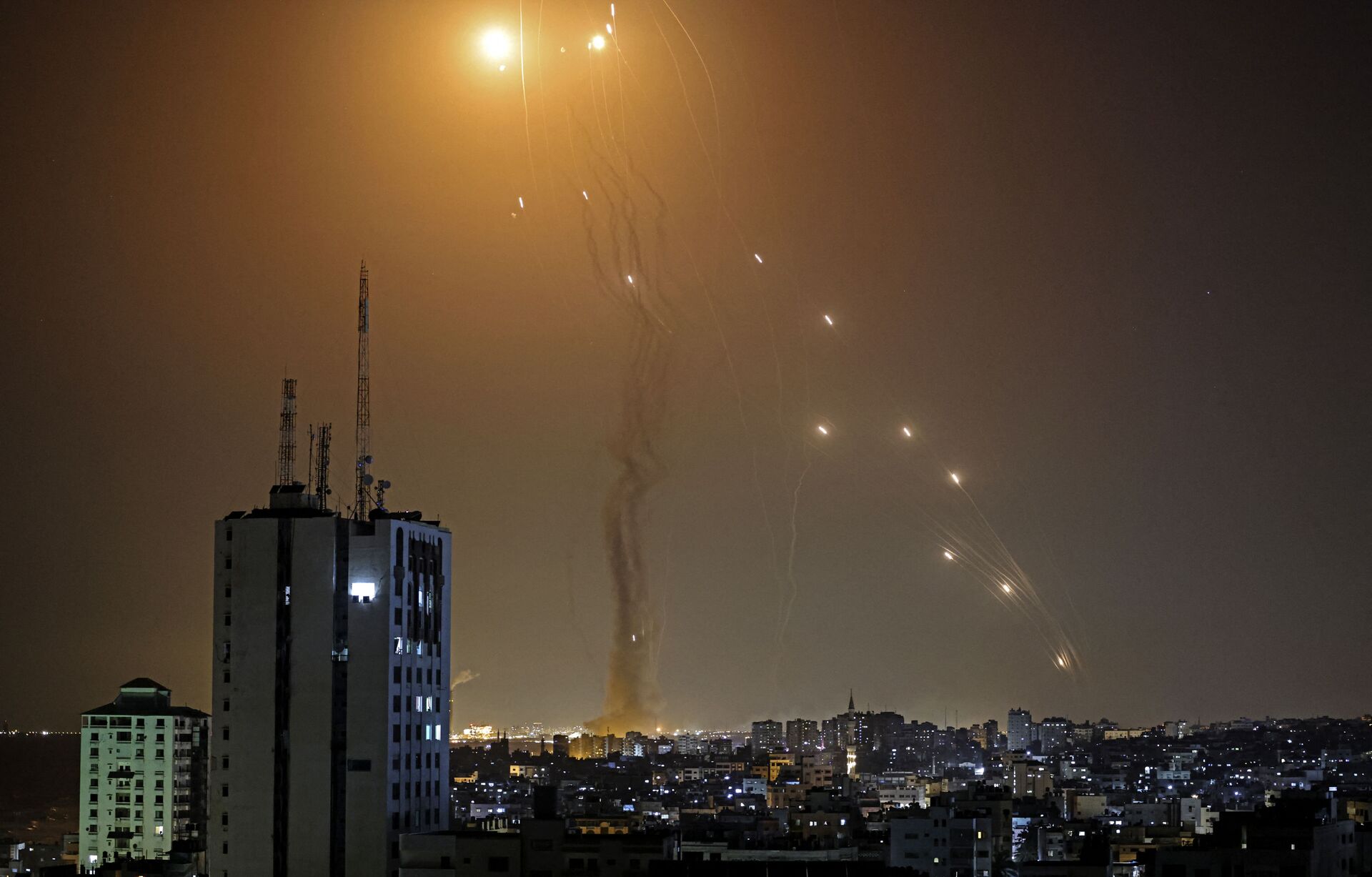 A rocket launched from Gaza city controlled by the Palestinian Hamas movement, is intercepted by Israel's Iron Dome aerial defence system, on May 11, 2021.
© AFP 2022 / MAHMUD HAMS

Israel is facing its biggest and broadest security crisis in years over a series of policy decisions by the Netanyahu government which have enraged Palestinian-Israelis and those living in the West Bank and Gaza. Small clashes between Israeli security forces and Palestinians in Jerusalem began on 12 April, after police put up barriers to prevent people from gathering near Damascus Gate, one of the main entrances to the Old City of Jerusalem, ahead of the Ramadan holiday.

Tensions escalated further on 6 May as demonstrators began protesting over an expected ruling by Israel’s Supreme Court to evict Palestinian families from their homes in an East Jerusalem neighbourhood. The violence prompted the court to delay the ruling for thirty days. The Israeli police storming of the Al-Aqsa compound – one of the holiest sites of Islam, on Monday to remove protesters anticipating raids by ultranationalist Israelis ended up sparking riots by Arab-Israelis throughout the country.

The violence, which has included inter-ethnic strife, arson attacks, shootings and clashes between protesters and police, has caused hundreds of injuries on both sides, with seven civilians in Israel (two of them Palestinian-Israelis) and one Israeli soldier killed. 16 Palestinians died in protests in East Jerusalem and the West Bank. The back-and-forth volleys of rockets and missiles by Gaza militants and the Israeli military have killed at least 126 civilians and 20 militants in the enclave. Over a thousand Hamas rockets, and hundreds of Israeli missiles, have now been fired. A 15 May Israeli airstrike destroyed an office building used by the Associated Press in Gaza. 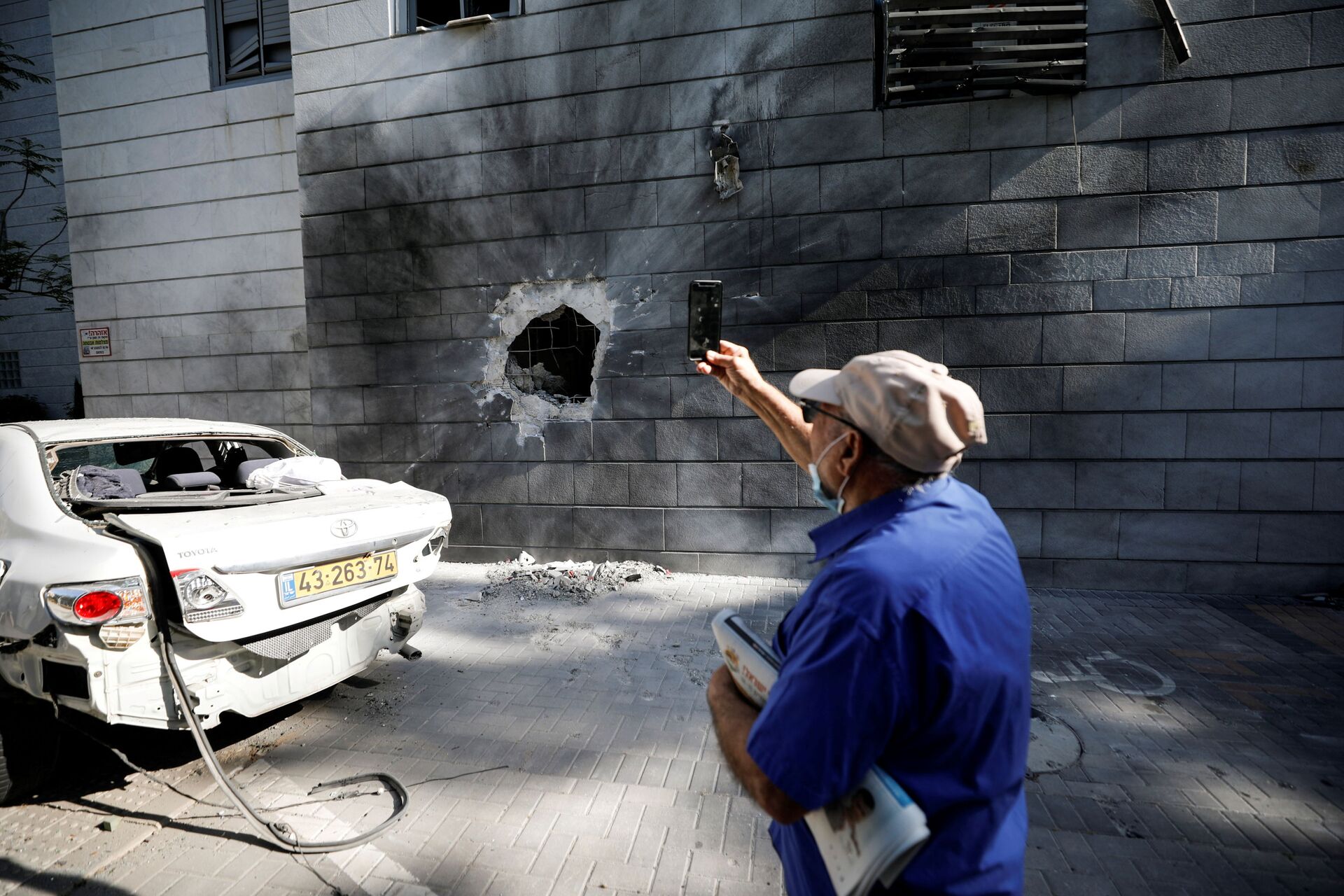 An Israeli man takes a photo with his mobile phone at a residential building after a rocket launched overnight from the Gaza Strip hit it in Ashkelon, Israel May 14, 2021.
© REUTERS / AMIR COHEN
Newsfeed
0
Access to the chat has been blocked for violating the rules . You will be able to participate again through:∞. If you do not agree with the blocking, please use the feedback form
The discussion is closed. You can participate in the discussion within 24 hours after the publication of the article.
To participate in the discussion
log in or register
loader
Chats
Заголовок открываемого материала