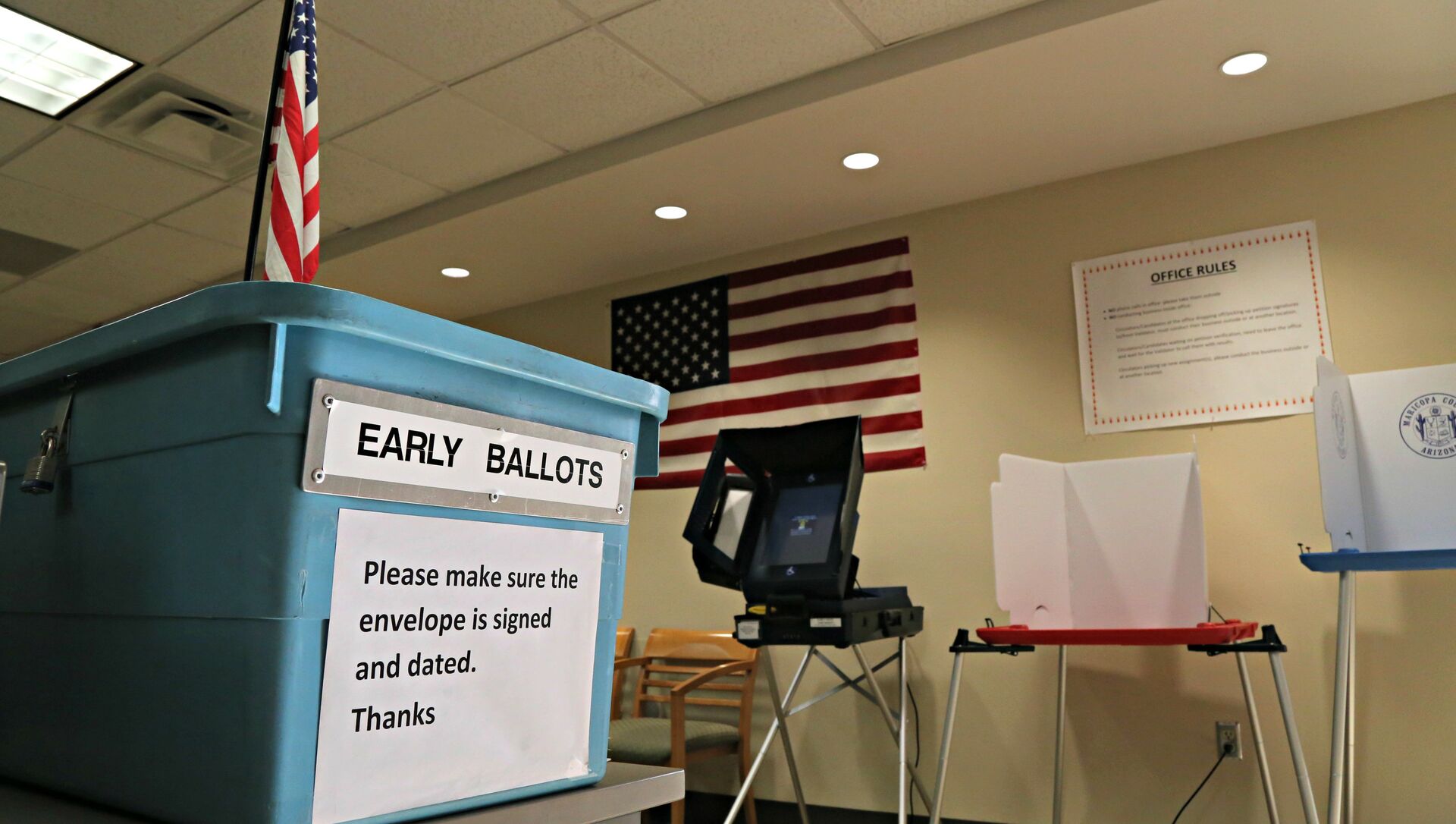 Ekaterina Blinova
All materialsWrite to the author
The Arizona GOP audit of the Maricopa County 2020 election results has discovered a number of troubling issues, starting with the lack of passwords for the voting equipment subpoenaed by the state's Senate, and ending with the alleged removal of the main database for 2020 election-related data.

"Maricopa County deleted a directory full of election databases from the 2020 election cycle days before the election equipment was delivered to the audit", the official account of the Senate liaison for the Maricopa County 2020 forensic election audit tweeted on 12 May, suggesting that this amounts to "spoliation of evidence".

The report came amid the recount of 2.1 million ballots and examination of election equipment from Maricopa County by a group of independent auditors hired by the Arizona Senate GOP. However, the supposed tampering with the election records appears to not be the only abnormality spotted by the state's GOP.

In a Wednesday letter to the Maricopa Board of Supervisors, Arizona Senate President Karen Fann outlined a number of serious issues which popped up during the forensic audit.

First, she drew attention to the fact that attorneys for Maricopa County had refused to produce virtual images of routers subpoenaed by the state's Senate in relation to the 2020 general election. Earlier, the county officials refused to provide the hardware to auditors, claiming that it would "endanger the lives of law enforcement officers, their operations, or the protected health information and personal data of Maricopa County’s citizens".

Fann cast doubt on the county's argument, adding that "if true, the fact that Maricopa County stores on its routers substantial quantities of citizens’ and employees’ highly sensitive personal information is an alarming indictment of the County’s lax data security practices, rather than of the legislative subpoenas".

Cifyr is the company that would look at the routers in place at Maricopa County. They look at top secret data all the time. To say they would risk law enforcement is absolute nonsense.

​The Arizona Senate president also questioned the county's assumption that producing the Internet routers for inspection "would cost up to $6,000,000", recollecting that earlier, Deputy County Attorney Joseph La Rue told Audit Liaison Ken Bennett that "the routers already had been disconnected from the County’s network and were prepared for imminent delivery to the Senate".

"Its attorneys’ insistence that the County does not have custody or control of this information is belied by the County’s conduct of its own audits, which, if they were as comprehensive as they purported to be, almost certainly would have entailed use of the passwords to examine the tabulation devices, and it strains credulity to posit that the County has no contractual right to obtain (i.e., control of) password information from Dominion", the Arizona Senate president wrote.

Everything @katiehobbs is saying right now is designed to deflect and distract from the fact that Maricopa County never had the passwords to set up its own election! Who has the passwords??

​Third, as the recount progressed, the Senate’s auditors spotted "apparent omissions, inconsistencies, and anomalies" relating to the county's handling, organisation, and storage of ballots. Fann outlined at least five sorts of such anomalies, expressing hope that the Maricopa Board of Supervisors could shed light on this.

​Fourth, the Arizona Senate president specifically addressed the alleged deletion of the directory full of election databases from the voting machines.

"In addition, the main database for the Election Management System (EMS) Software, 'Results Tally and Reporting', is not located anywhere on the EMSPrimary machine, even though all of the EMS Clients reference that machine as the location of the database", Fann continued. "This suggests that the main database for all election-related data for the November 2020 general election has been removed".

She asked the board of supervisors why the folders in question had been deleted, and whether there are any back-ups that contained the removed data, urging the Maricopa officials to answer her questions at a meeting at the Arizona State Capitol on Tuesday, 18 May 2021. 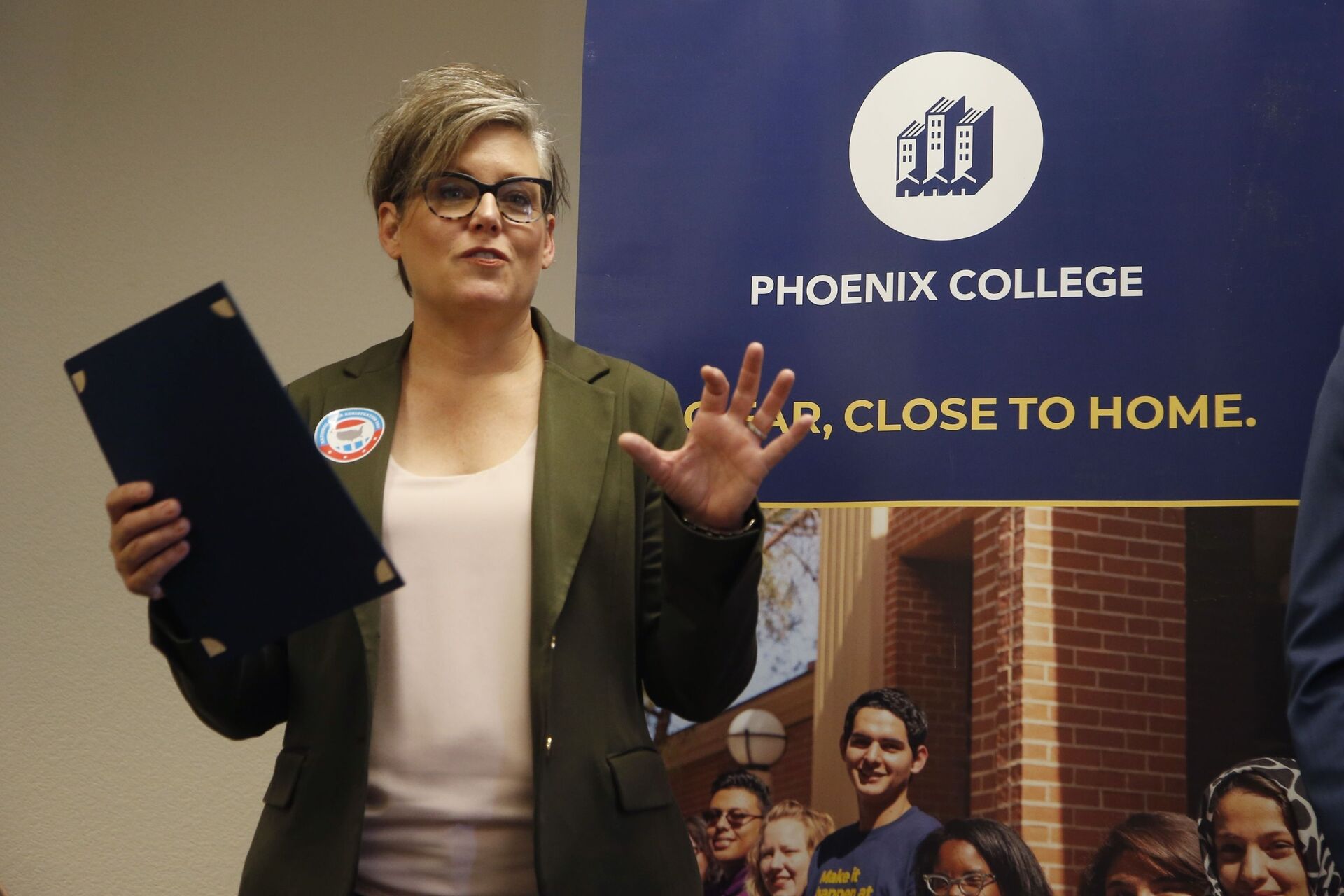 Democratic Party Up in Arms About the Audit

Providing a daily update for the audit on Wednesday, Arizona GOP Chairwoman Kelli Ward suggested that it is because of apparent election malfeasance that the Democratic Party is trying so hard to stop the audit.

After 2.1 million ballots along with election equipment had been delivered to the Veterans Memorial Coliseum in Phoenix and the GOP announced that the recount would kick off on 23 April, the Democratic Party launched a lawsuit against the Senate and its auditors. Nevertheless, the Maricopa County Superior Court ruled that the audit may continue.

Meanwhile, on 5 May, the US Department of Justice informed Karen Fann that the use of an outside contractor to audit the ballots may be in violation of federal law and amount to illegal voter intimidation. The letter from the head of the DOJ Civil Rights Division came just six days after several voting rights groups, including the Brennan Center for Justice, the Leadership Conference, and Protect Democracy, urged the federal government to intervene.

On 12 May, Hobbs tweeted that observers from her office had discovered a WiFi router connected to the audit servers.

🚨 Yesterday, observers from my office discovered a WiFi router connected to the "audit" servers.

​In response, the official account of the Senate liaison for the Maricopa County audit stated that "no wireless was ever enabled", adding that "this was explicitly explained to the secretary of state observers on site".

"We are open to providing all passwords and access needed for a forensic investigation of the router if requested", the Maricopa Arizona Audit account emphasised.

​Back in November 2020, Joe Biden won the county by more than 45,000 votes, and outperformed Trump statewide by a margin of 10,457 votes, or 0.3 percent of the roughly 3.4 million ballots cast. Following the election, the county held two forensic audits. However, the state's GOP insisted on a third recount which was greenlit by Superior Court Judge Timothy Thomason on 26 February 2021.