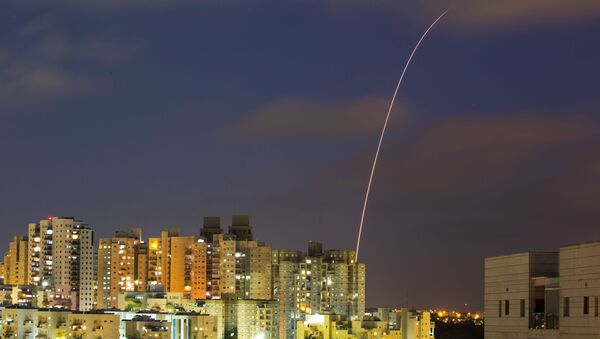 Since the beginning of the week, Israel and Gaza have been engaged in a heavy exchange of fire, causing multiple casualties on both sides. As the fourth straight day of violence continues in the region, no end appears in sight, despite numerous calls from the worldwide community for urgent de-escalation.

Tensions on the Israeli-Gaza border continue to run high as the biggest escalation in the Israeli-Palestinian conflict in recent years has entered its fourth day.

The Israeli Army is bracing for a land operation in the enclave after Palestinian militants continued rocket fire overnight.

In total, some 1,750 rockets have been fired into Israel since the beginning of the flare-up, killing at least six people. Meanwhile, Israeli aistrikes on Hamas and Islamic Jihad targets have cost some 67 people their lives.

Follow Sputnik's live feed to find out more about the escalation of Israeli-Palestinian tensions.

BERLIN, May 14 (Sputnik) - The Middle East Quartet (the United Nations, the United States, the European Union and Russia) will convene later on Friday amid escalating regional tensions; Germany expects Russia to make a positive contribution to settling the conflict in the Gaza Strip, the German Foreign Ministry's spokesman, Christopher Burger, said.

"All those who can have a positive influence must contribute now. As it was said, the Middle East Quartet will convene today ... Russia is a participant of the format," Burger told reporters, asked about Berlin's expectations from Moscow regarding the crisis settlement.

Our jets and aircraft just struck a number of Hamas launch sites and observation posts in Gaza.

Around 160 aircraft carried out a massive attack on a network of tunnels supposedly dug up by Hamas under Gaza City, the IDF says.

According to the Israeli military, some 450 missiles were dropped on 150 targets during the 40-minute air campaign in northern Gaza.

The military is yet to determine the extent of the damage inflicted to the tunnels, described by IDF spokesperson Hidai Zilberman as a “strategic asset” to Hamas.

Zilberman has also clarified that the IDF ground troops remain on Israel's side of the border and didn't cross into the Gaza Strip.

The target: The Hamas ‘Metro’ tunnel system in Gaza.

The operation: 160 aircraft, tanks, artillery and infantry units along the border.

We struck 150 targets and damaged many kilometers of the Hamas ‘Metro’ network. pic.twitter.com/otn7JKxB9c

CAIRO (Sputnik) – The clashes between the Israeli police and Palestinians have left 349 Arabs injured within the past 24 hours, the Palestinian office of the Red Crescent said on Friday.

“The whole number of injuries and traumas, registered today by our brigades in the West Bank, the Gaza Strip and Jerusalem, stands at 349,” the organization said.

From the Iron Dome interceptions over Ashkelon

WASHINGTON (Sputnik) – The United States has withdrawn around 120 military personnel from Israel amid escalating violence in the region, a US European Command (EUCOM) spokesman Charles Prichard told Sputnik on Thursday.

“Approximately 120 DoD personnel arrived in Germany from Israel today via a C17 aircraft based out of Ramstein Air Base. We made the decision in coordination with Israel,” Prichard said.

The group was in Israel for a routine planning event, which was scheduled to wrap up this week, he added.

Earlier on Thursday, a peaceful rally in support of Palestine was held in Paris’s Place de la Republique. It involved several dozens of participants who were later dispersed by the police. A similar action was also planned in the French capital on Saturday.

"In Paris, I asked the Prefect of Police to ban the demonstrations on Saturday in connection with the recent tensions in the Middle East. Serious disturbances to public order were noted [in similar demonstrations] in 2014. Instructions were given to the Prefects to be particularly vigilant and firm", Darmanin tweeted.

The police reacted by issuing an order prohibiting the demonstration planned for Saturday.

TEL AVIV, May 13 (Sputnik) - The Israeli military has attacked four apartments of high-ranking members of Hamas in the Gaza Strip that were used to plan military operations, the Israel Defence Forces press service said on Thursday.

"An Israeli Air Force fighter jet struck an apartment belonging to a deputy commander of Al-Qassam Brigades [Hamas military wing] in the north of the Gaza Strip. In addition, the IDF attacked three apartments belonging to the commanders of the Sajaya and Shabura regiments in the northern part of the Gaza Strip and the commander of the Deir al-Balah regiment in the central area of the enclave. All apartments were used to plan and conduct the recent Hamas attacks", the statement said.

Large-scale clashes broke out from May 7-10 between Palestinians and Israeli police, leading to the sharpest escalation in the Gaza Strip in recent years. Riots began in two areas of East Jerusalem at once - near the Temple Mount and in the Sheikh Jarrah quarter, where several Arab families are being evicted by the Israeli court decision.

Palestinian militants have launched over 1,600 rockets from Gaza toward Israel. The effectiveness of the Israeli missile defense system Iron Dome is estimated at around 90%. Six Israeli civilians and one military man have died since the beginning of the escalation of the conflict. Israel has fired retaliatory strikes against Gaza, attacking about 600 military targets of Hamas and Islamic Jihad. According to the enclave's health ministry, the number of Palestinians killed in three days increased to 83, and 487 people were reportedly injured.

"Defence Minister Benny Gantz has authorised the IDF [Israeli Defence Forces] to recruit an additional 9,000 reservists as a matter of urgency in line with operational needs following an assessment of the security situation", the ministry said in a statement.

UNITED NATIONS (Sputnik) - Israel does not seek escalation with Gaza but has the right and duty to defend itself, Israeli Permanent Representative to the United Nations, Gilad Erdan, said in a letter to the UN Security Council seen by Sputnik.

“The State of Israel is not interested in an escalation. However, Israel has the right and duty to defend its people and sovereignty and will continue to do so vigorously”, Erdan said in a letter dated 12 May.

The ambassador said since Monday morning, more than 1,500 rockets had been fired from the Gaza Strip towards Israeli communities, resulting in seven fatalities and hundreds of more people being injured.

“As of today, millions of Israeli civilians are under relentless attacks by these terrorist organizations and are forced to remain in shelters”, he said.

Erdan also pointed out Israel continued to ensure freedom of worship for Muslims on the Temple Mount. According to him, hundreds of thousands of Muslims visit the site every year, and this status quo will not change.

Large-scale clashes broke out from 7-10 May between Palestinians and the Israeli police, leading to the sharpest escalation in the Gaza Strip in recent years. Riots began in two areas of East Jerusalem at once - near the Temple Mount and in the Sheikh Jarrah quarter, where several Arab families are being evicted by an Israeli court decision.

🚨RIGHT NOW: Sirens sounding in the city of Beersheba🚨

"Using the batteries of the Iron Dome gives us the ability to attack, and the IDF [the Israeli Defence Forces] has already attacked hundreds of targets, soon there will be more than a thousand, and we continue to strike at Hamas, protecting our citizens", the prime minister said.

GAZA STRIP (Sputnik) - Al-Qassam Brigades, the military wing of the Gaza Strip-based Hamas movement, said on Thursday that it has launched dozens of rockets at Tel Aviv and other Israeli cities.

According to the statement, the cities of Netivot and Beer Sheva were targeted.

CAIRO (Sputnik) - The military wing of the Gaza Strip-based Hamas Islamist movement said on Thursday that it had fired a rocket toward the Ramon International Airport in southern Israel shortly after flights were re-directed there from the Ben Gurion airport.

"We have now launched the most destructive Ayyash 250 missile with a range of over 250 kilometers at the Ramon airport in southern Palestine, located 220 kilometers from the Gaza Strip", the Izz ad-Din al-Qassam Brigades wrote on Telegram.

The wing noted that this move is a limited response to the elimination of Hamas leaders by the Israeli Air Force.

However, an Israeli official told Reuters that the airport had not been targeted by rocket fire and was operating as usual.

Earlier in the day, authorities of Israel's Ben Gurion International Airport decided to reroute all incoming flights to the Ramon airport because of ongoing rocket attacks from the Gaza Strip.

MOSCOW (Sputnik) - Major European airlines, including Austrian Airlines, British Airways and Lufthansa, have suspended flights to Israel due to the conflict on the border with Gaza, Israeli media reported on Thursday.

German company Lufthansa and Austrian Airlines stated that they would not carry out flights from Frankfurt, Vienna and Munich on Thursday and Friday, the Haaretz newspaper reported.

In addition, authorities of Israel's Ben Gurion International Airport decided earlier on Thursday to reroute all incoming flights to the Ramon airport in the country's south because of ongoing rocket attacks from the Gaza Strip.

A day prior, an American Airlines spokesperson told Sputnik that the company had canceled its flights to Tel Aviv for May 12-13 due to the escalation of violence in the region. Among those who temporarily stopped their flights to Israel are also United Airlines and Delta Air Lines.

MOSCOW/TEL AVIV (Sputnik) - Israeli Defence Minister Benny Gantz has ordered the call-up of 10 Border Police units and deploy them across the country in a bid to suppress ongoing clashes between Arab and Jewish communities, The Jerusalem Post newspaper reported on Thursday.