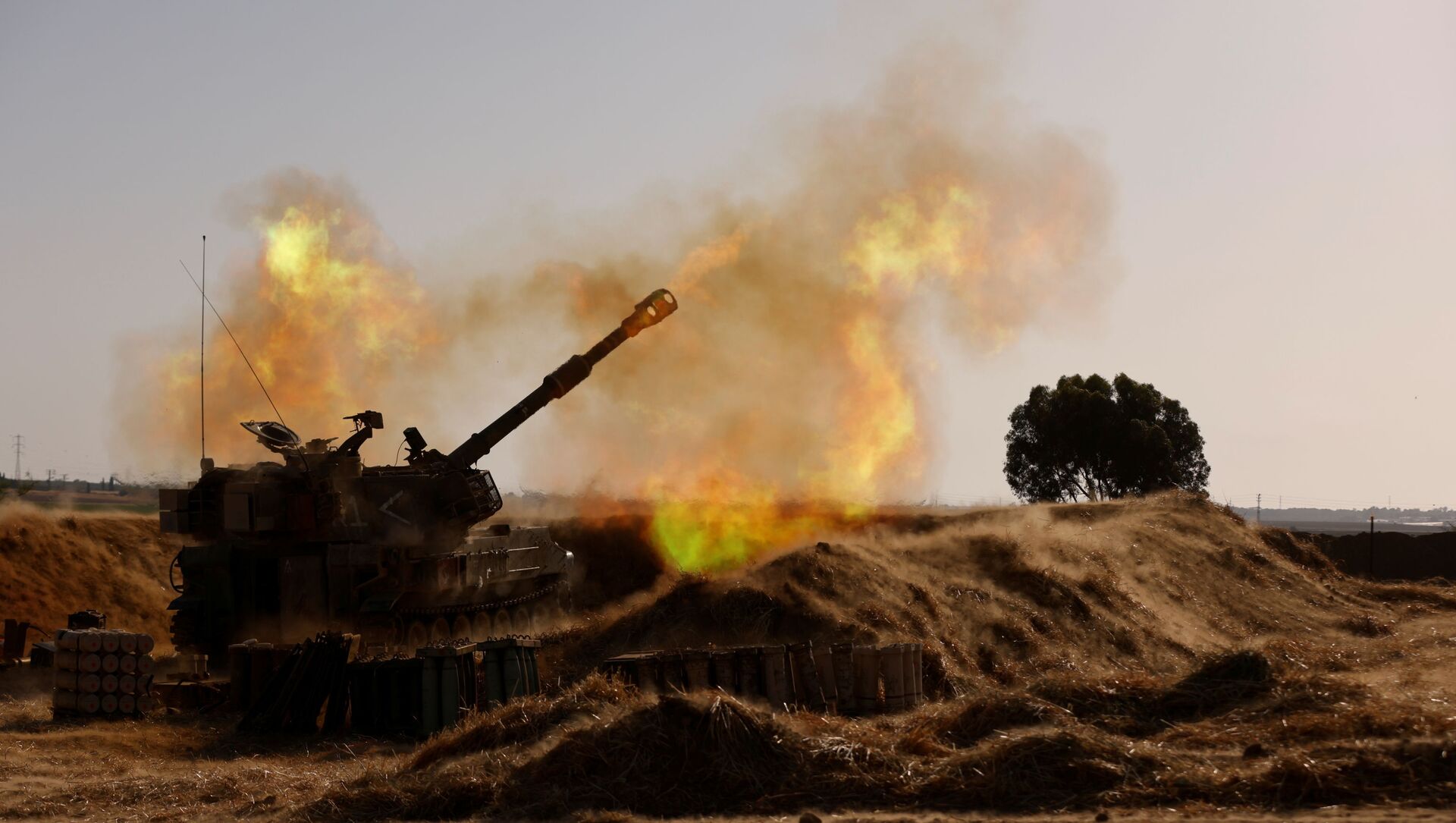 The largest confrontation at the Gaza border in recent years began on Monday evening, preceded by violent clashes between Arabs and Jews in Israel. Since then, Palestinian militants have fired over 1,700 rockets into Israel, killing six Israeli civilians and one serviceman. Retaliatory attacks have been launched by Israel against Gaza.

The Israel Defense Forces announced on Thursday night that a military operation is currently being conducted by air and ground forces in the Gaza Strip.

Media reports were circulating a video of Israeli tanks allegedly crossing the border into the Gaza Strip.

#Breaking: Update - IDF tanks are now moving over the fence in the the #Gaza strip right now, for a possible soon ground offensive from #Israel. pic.twitter.com/IkWoBvqPWD

However, a source within the Israeli security forces told Sputnik that the IDF is not conducting a ground operation that involves troops entering the Gaza Strip.

"The Israeli army is not carrying out a ground operation in the Gaza Strip at the moment," the source said.

At first, the IDF did not immediately provide any further information, only stating that it will be forthcoming.

Media reports initially indicated that ongoing attacks did not imply a full invasion was underway, but reports emerged of ground forces moving towards Gaza shortly after.

Later, an IDF spokesperson reportedly indicated that the forces' initial tweet about its operations were misinterpreted by several outlets, and reiterated that that the IDF ground troops were not entering the Gaza Strip, by saying "this is not a ground entry."

According to local media reports, over 40 airstrikes were conducted in northern areas of the enclave by the Air Force. Reporters on-site claimed that artillery guns, tanks and combat helicopters participated in the operation.

Israeli Prime Minister Benjamin Netanyahu issued a statement on Twitter, in which he referred to his earlier commitment to inflict a "high price" on those Gaza militants which he holds accountable for the continuous rocket barrages fired toward Israel. While the last word has not been spoken yet, according to Netanyahu, the operation "will continue as long as necessary."

Amid the rocket barrages, the IDF issued a statement urging residents of Israeli settlements within 4 kilometers of the border with the Palestinian enclave to remain in hiding until further notice.

An alleged video of the ongoing attack in northern Gaza has been circulating on social media.

​Since the evening, according to media, at least six Israeli aircraft have conducted a total of around 100 air raids on the northern part of Gaza.

Eyewitnesses and local media report power outages in the area of the ongoing military operation.

Earlier in the day, Israeli media reported, citing sources in top leadership circles, that the possibility of an open invasion of Gaza amidst the incessant shelling was discussed and has not yet been ruled out.

Prior to the current attack, the IDF bombed Palestinian government targets, Hamas' central bank, a force that the Israeli military said belonged to Hamas' navy unit, and the home of Iyad Tayeb, a top Hamas commander who supervised a number of battalions.

Several top leaders of Israel have repeatedly stated that the retaliation measures of the country were "just the beginning."

In response, Palestinian armed groups have pledged to intensify the shelling of Israeli territory. Rocket attacks from Gaza were launched throughout Israel on Wednesday night, reaching the northern part of the country for the first time, the IDF reported. Rocket sirens were also heard in Jerusalem.