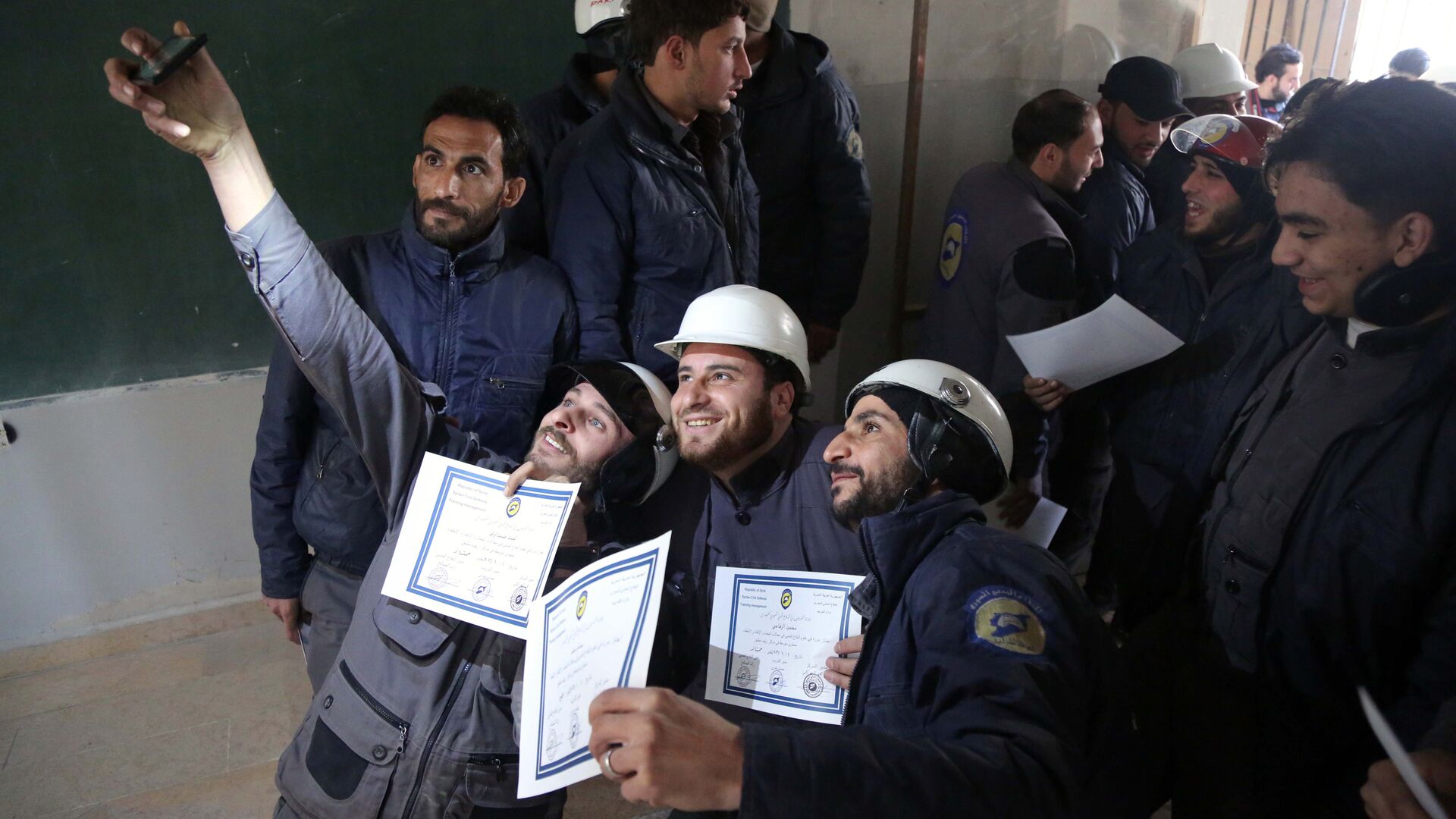 Ekaterina Blinova
All materialsWrite to the author
Being aware of fraud allegations against the White Helmets' international cashbox, the Mayday Rescue Foundation, the Dutch government opted to keep it on the hush-hush, the newspaper de Volkskrant reported on 7 May. What's behind the supposed cover-up attempt and what else are European governments hiding?

The Mayday Rescue Foundation was registered in the Netherlands in 2014 as a not-for-profit entity by James Le Mesurier, a former British Army officer. Since its inception, Mayday has provided support to the Syria Civil Defence, commonly known as the White Helmets, a controversial group acting under the guise of a "humanitarian" organisation in the jihadist-held areas of Syria.

According to The Grayzone, Western governments, including Britain, Germany, Canada, Denmark, and the Netherlands, funnelled a total €100 million ($121 million) in taxpayer money to Mayday to fund the White Helmets. Judging from the White Helmets' official website this funding was intended to go "towards the training, equipment, and support" to the Syrian group. However, serious concerns over potential financial mismanagement prompted the Netherlands to stop funding Mayday by the end of 2018, the newspaper de Volkskrant noted.

While the Idlib offensive is about to begin in Syria, the Netherlands is ceasing support for rescue workers from the White Helmets.

Almost all other support for opposition groups in Syria also unexpectedly ceased.https://t.co/jZchLOSKlf

​The first audit of the entity was requested by the UK's Department for International Development (DfID) in late 2018. Ending in June 2019, it cited no serious issues but recommended "introducing more stringent accounting controls and tighter governance", according to The Guardian.

The problems came to light in November 2019, when Dutch firm SMK Audit, visited Mayday's office in Istanbul and uncovered forged receipts and inconsistencies in documentation. According to de Volkskrant, the entity's bookkeeping was seriously inadequate, with payments being untraceable. Mayday's founder James Le Mesurier admitted to the accountant that he did take $50,000 in money intended for the Syrian group for himself.

On 11 November 2019, the British Army officer fell to his death in Istanbul. Three days before the alleged suicide, Le Mesurier confessed to financial fraud in a letter to donor countries.

We are heartbroken to confirm that our founder and CEO, James Le Mesurier, died this morning. He was a dedicated humanitarian whose work with Syria Civil Defence/The White Helmets helped save countless civilian lives. https://t.co/XJ9QHjEZfS

At the end of 2019, Sigrid Kaag, the Dutch minister for foreign trade and development cooperation, planned to send a letter to the nation's House of Representatives about the Mayday Rescue Foundation's alleged fraud, according to de Volkskrant. Top government officials, however, stopped her from informing lawmakers, citing the potential "harm" the letter could inflict on Mayday and the White Helmets.

In mid-2020, the Netherlands' Central Audit Service advised the government to reclaim more than €3.6 million ($4.4 million) in tax money that it had poured into Mayday. Nevertheless, the Dutch government, that contributed a total of €12.5 million ($15.2 million) to the foundation, did not request the money. 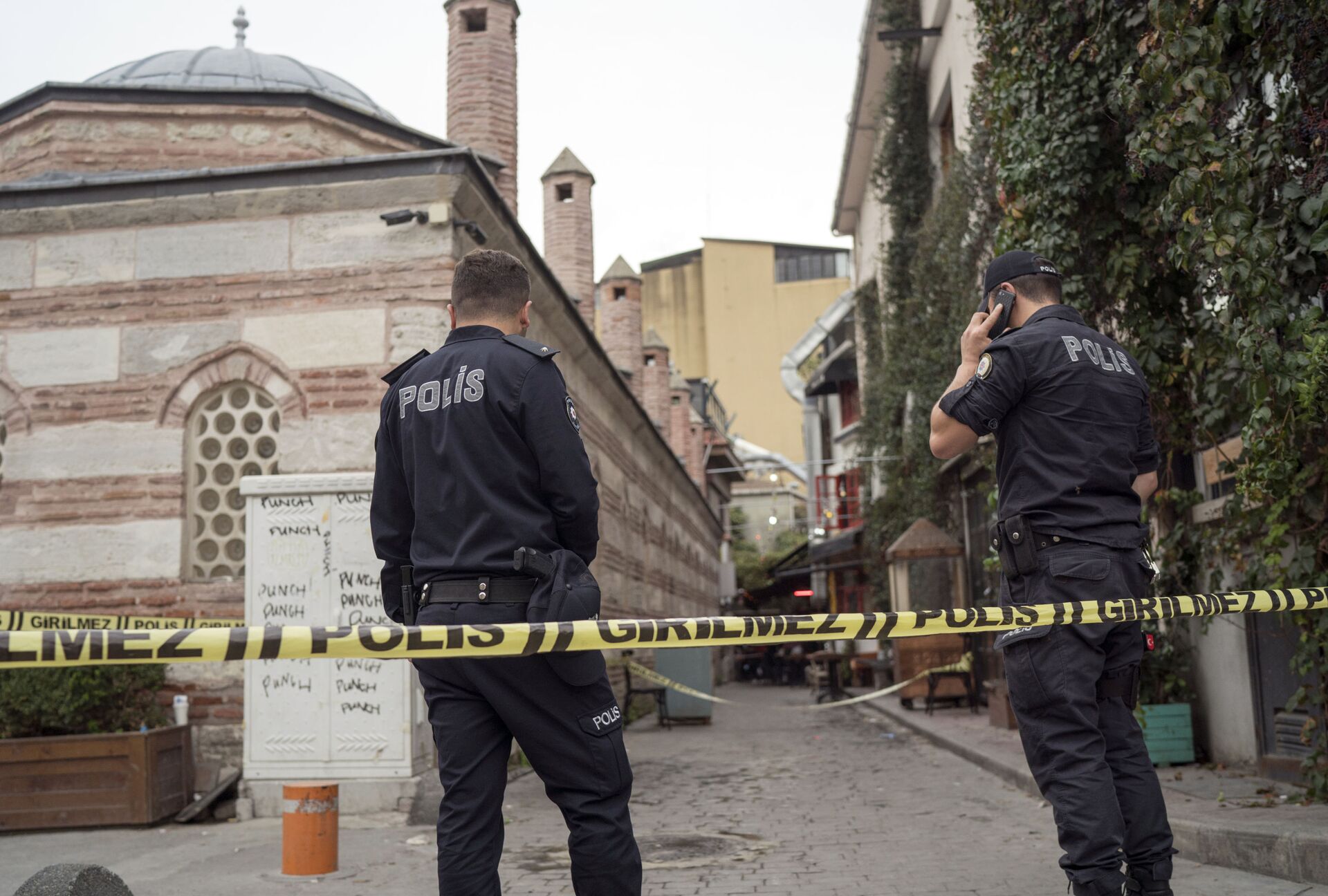 While Le Mesurier took responsibility for the disappearance of $50,000 intended for the White Helmets, it was not the only issue with the foundation. The former British officer also cited very high salaries, cash bonuses, and unpaid taxes, according to de Volkskrant.

The Dutch accountant found that until 2018, revenues and expenditure were registered in handwritten cash books which appeared very messy.

The entity had no supervisory board, meaning that administrators could decide their own salaries. In some cases these salaries amounted to €26,000 ($29,195) a month. Thus, one of the administrators received $320,000 for 2018. These figures were well above the approved salary ceiling of a subsidised organisation in the Netherlands. The fact that the non-profit had "commercial" branches in Turkey and Dubai also prompted criticism.

In addition to that, the Dutch auditor found entries in the cash book labelled "James for wedding" and "loan to Emma", an apparent reference to Le Mersurier's wife, Emma Winberg, who served as a foundation administrator. On top of this, the former British officer and his wife took additional bonuses. It appeared that they withdrew large portions of cash for private use. On the other hand, Winberg's work for the entity raised serious concerns over a potential conflict of interest. 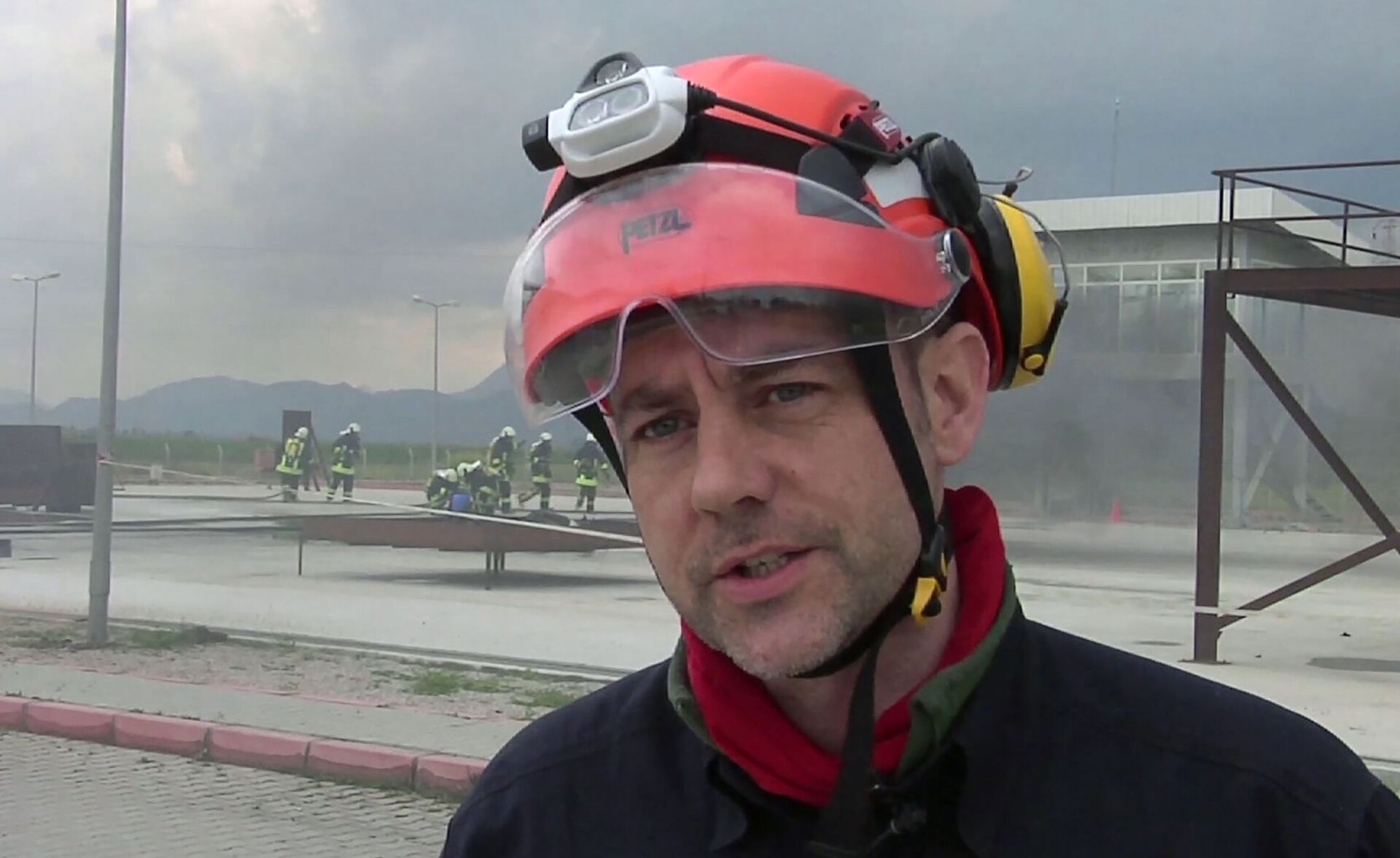 In his letter to international donors, the ex-British military man admitted he feared a second investigation by a forensic auditor might reveal further "errors and internal failures". This, according to him, would be leaked to the media and become "a victory for Russia and the pro-Assad trolls''. In the end, Le Mesurier left the choice of how to proceed up to the donor countries.

Shortly after Le Mersurier's death, European donor countries held a series of "crisis meetings" in the Dutch Consulate in Istanbul. Eventually, in February 2020, they agreed on the need to "avoid political risks" and ways to ensure "minimal exposure".

This is how the damage control operation began, according to The Grayzone. In July 2020, de Volkskrant journalist Ana van Es drew attention to European governments having kept quiet about the foundation's wrongdoings.

​Also in July 2020, the UK-headquartered accounting firm Grant Thornton, which investigated the foundation, stated that it had found no proof of Mayday's fraud. The firm admitted, however, that much information from the entity's financial administration was missing. Grant Thornton concluded that the cash withdrawals by Le Mesurier and his wife were accounted for and put the disappearance of $50,000 down to a "misunderstanding".

Nevertheless, the company's forensic audit of Mayday's books has never been made public. The incumbent Mayday chair, Cor Vrieswijk, said the donor countries do not want to share this information, according to de Volkskrant.

For their part, some European mainstream media outlets such as The Guardian and the BBC, tried to whitewash Le Mesurier's apparent misdeeds, depicting him as nothing short of a second Lawrence of Arabia and a victim of a "disinformation campaign" by the Russians, Syrians, "pro-Assad bloggers", "alt-right media figures", "self-described anti-imperialists", and "useful idiots".

Why Did European Governments Try to Cover It Up?

Per The Grayzone, Le Mesurier and other British and American operatives were part of Western governments' decade-long effort to topple the government of Bashar al-Assad in Syria. It appears that some of these operatives took a cut from multi-million dollar schemes to destabilise Damascus for themselves, the media outlet noted.

Dirty Wars require cover-ups. So when it comes to Syria, there's a lot. We've seen the OPCW censor its own investigators. We're also seeing the NATO states that poured millions into the "White Helmets" desperately thwarting any public disclosure: https://t.co/z7OF5Id6lY

​Le Mesurier's White Helmets was particularly important for the Western narrative about the Syrian war. In 2017, Netflix won an Oscar for a documentary called "The White Helmets", showing the group as heroic rescue workers who provided emergency medical assistance to Syrian civilians. However, Vanessa Beeley, a British investigative journalist and peace activist, dismantled this narrative in 2017 citing testimonies of liberated Syrian civilians from East Aleppo, who lambasted the group as an al-Qaeda* and al-Nusra Front* offshoot. 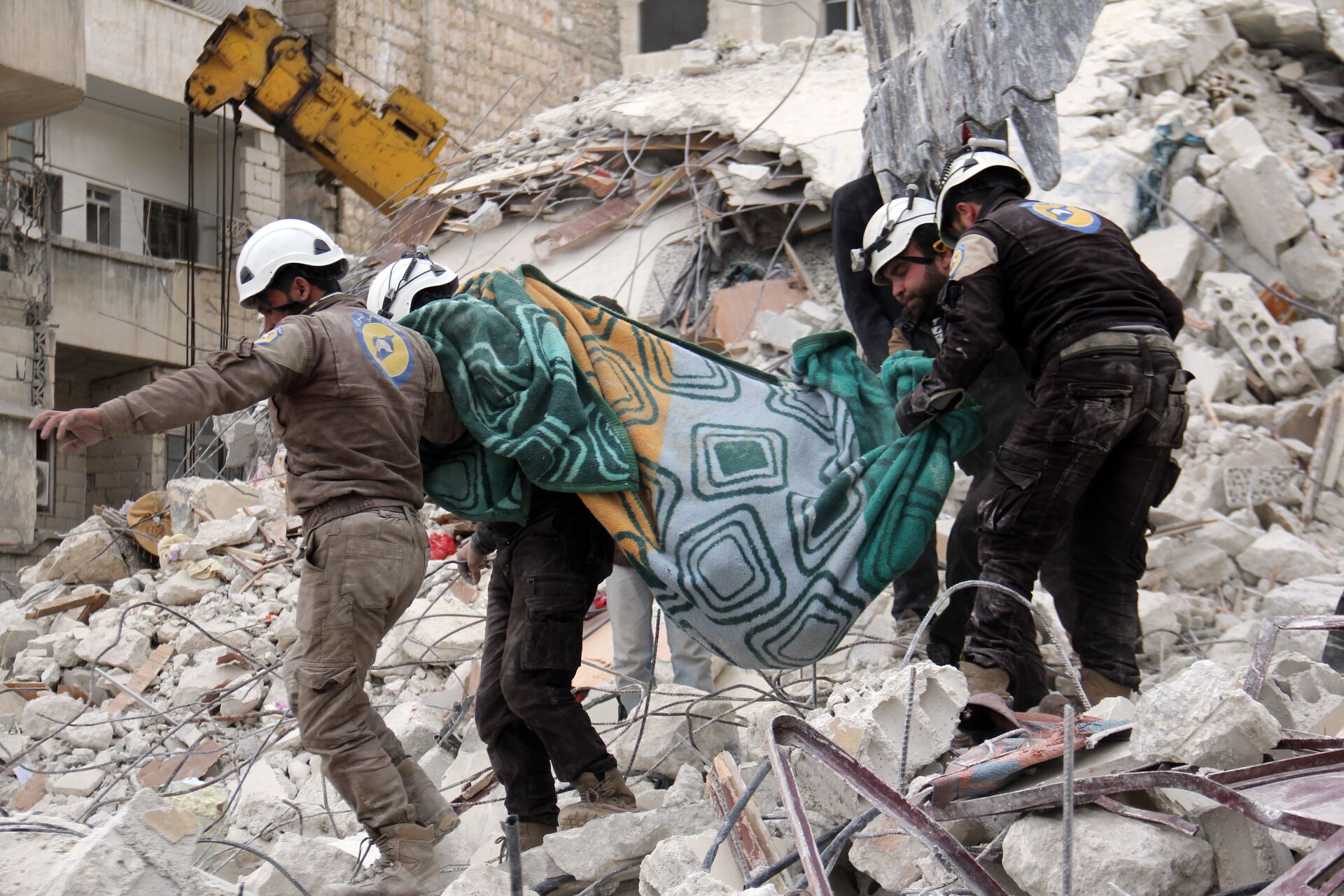 Syrian civil defence volunteers, known as the White Helmets, carry a body retrieved from the rubble following reported government airstrike on the Syrian town of Ariha, in the northwestern province of Idlib, on February 27, 2017
© AFP 2022 / Omar haj kadour

The group was later accused of staging a chemical attack in Douma, Syria, in 2018 in order to blame it on Assad's military forces. The White Helmets have been crucial to anti-Assad propaganda efforts, providing "proof" of the government's alleged "atrocities", and later used as a pretext for intervention, Beeley told Sputnik.

According to the BBC, Le Mesurier was "furious" about the British journalist's revelations.

Dubious activities by the Mayday Rescue Foundation and the White Helmets threatened to cast a further shadow over Washington and Brussels' decade-long involvement in the Syrian civil war.

Earlier, a declassified 2012 DIA report indicated that the Obama administration knew from the very beginning that the major forces driving the insurgency in Syria were not "moderate rebels", but al-Qaeda in Iraq*, the Muslim Brotherhood*, and Salafists.

"Western governments and their stenographers in the press have helped shield war profiteers from any consequences, as they have defrauded taxpayers in numerous countries out of huge sums of money, all in a desperate crusade to destroy Syria", The Grayzone underscored.

*Al-Nusra Front, al-Qaeda, and the Muslim Brotherhood are terrorist organisations banned in Russia and many other countries.