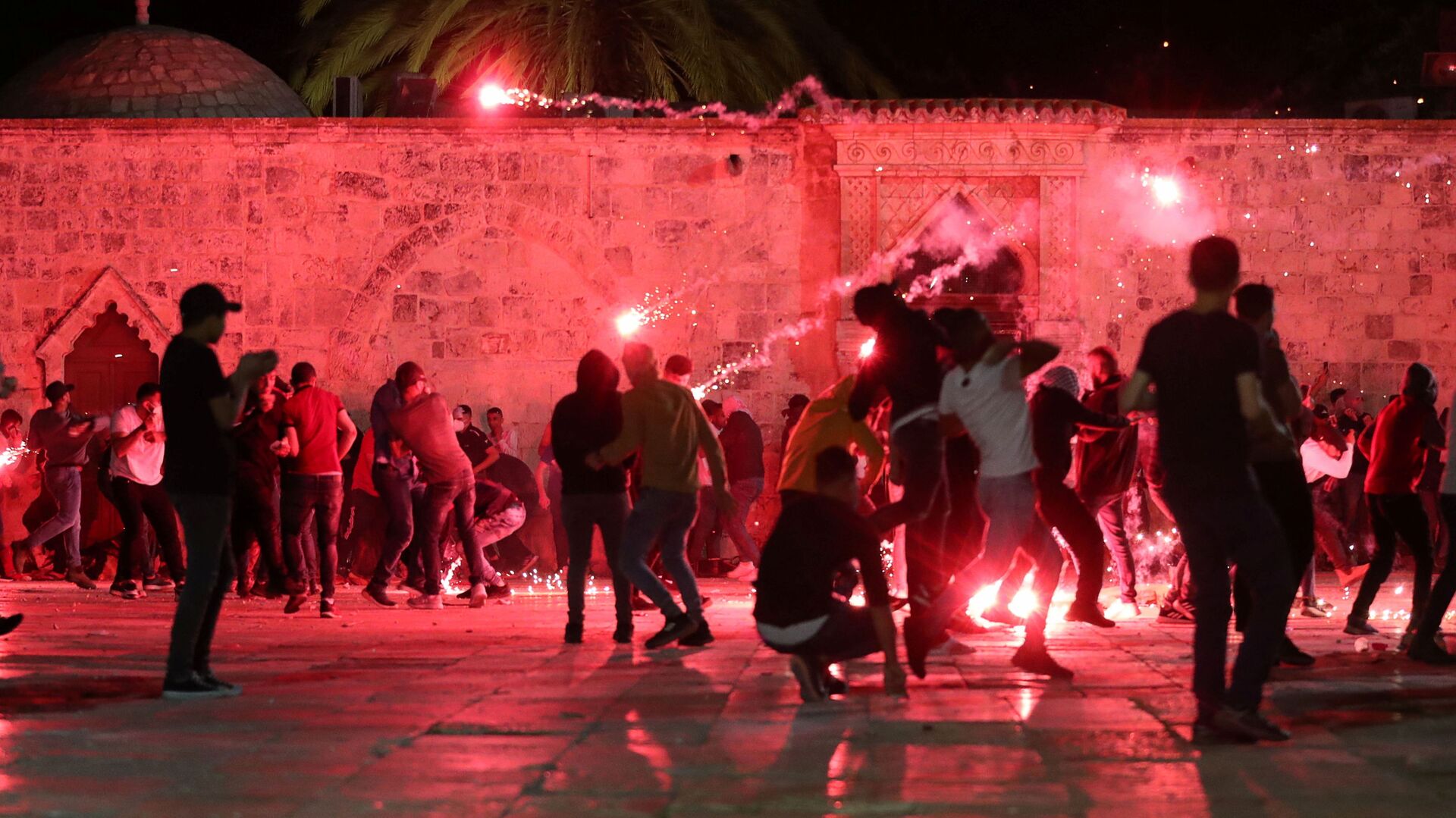 Daria Bedenko
All materialsWrite to the author
The recent weeks have seen heated tensions between Jews and Arabs, particularly with the possible eviction of dozens of Palestinian families from Jerusalem's Sheikh Jarrah neighbourhood fuelling the situation.

The city of Jerusalem saw heated squabbles between Palestinians and Israeli riot police on late Friday, with the latter saying that Palestinian worshippers who arrived at the Temple Mount started "disturbing the order" by throwing stones and fireworks.

The clashes sparked after weeks of tensions between Jews and Arabs during the holy month of Ramadan, with recent Israeli court rulings looming that would make it possible for dozens of Palestinian families in the Sheikh Jarrah neighbourhood to be evicted from their homes. While the Palestinians point out they have been living in the area for generations, the Jewish settler organization Lahav Shomron and the deputy Jerusalem mayor, Aryeh King, claim that the land in question "rightfully" belongs to Jews.​

The Palestinian Red Crescent organization has revealed that 205 Palestinians were injured during the clashes, with some 88 hospitalized.

According to Israeli police, six officers were injured during the altercations in Jerusalem. Later in the day, Times of Israel reported that at least 17 police officers were hurt and "around half of those" hospitalized.

"At the end of the prayer on the Temple Mount, thousands of worshipers began to disturb the order, throwing stones and firing fireworks. Israeli police forces are operating at the scene and so far six policemen have been injured in the disturbances. The district commander is in the arena assessing the situation and has ordered the continued increased alertness towards the end of the prayers", according to an Israeli police tweet.

Video recorded at the site of squabbles between riot police and protesters show worshippers violently clashing with officers, as fireworks are seen exploding, while crowds flock the streets near the Temple Mount area and the Al-Aqsa Mosque.

The clashes at The Temple Mount have moved to the Damascus Gate, #Jerusalem. pic.twitter.com/1wTWlvTDQG

​One video allegedly shows a border policewoman being hit in the face with a stone during the unrest at the holy site.

#BREAKING
Border Policewoman hit in the face with a rock during the riots on the Temple Mount in Jerusalem tonight being carried to paramedics pic.twitter.com/s65LOGjLu9

Heavy clashes tonight between Israeli border police and Palestinians on the grounds of al-Aqsa Mosque. pic.twitter.com/dE9Mk2HumU

Videos show that riot police struggle to curb the unrest by using of rubber bullets and sound grenades.

JUST IN - IDF forces and Palestinians clashes on Temple Mount. Stun grenades fired at Al-Aqsa mosque on the final Friday of Ramadan. pic.twitter.com/ATZ1efvroX

​​One of the videos circulating on social media allegedly shows the stun grenade exploding inside Al Aqsa Mosque during Friday worshipping. Another clip allegedly shows the Israeli police locking the doors of the mosque while the worshippers are still in the building.

​​​The Temple Mount altercations prompted swift reaction from many, with the US voicing its concern over the situation in Jerusalem and calling for deescalation, and Turkish Foreign Minister Mevlut Cavusoglu condemning what he described as the "Israeli attack on Al-Aqsa Mosque".

Statements followed from Hamas and the Islamic Jihad, with both entities echoing a condemnation of the attack and pledging consequences.

"The Chief of Staff of the Izz ad-Din al-Qassam Brigades Mohammed Deif salutes Palestinian citizens of the Sheikh Jarrah neighbourhood in occupied Jerusalem for standing steadfast", the statement from Hamas said. "The Chief of Staff is sending a clear and last warning to the Israeli occupation and settlers that if they did not immediately cease their aggression against our people in the Sheikh Jarrah neighbourhood, we will not sit on our hands and will make them pay a heavy price."

#Breaking| IJ leader: The enemy has to expect our retaliation anytime soon. What is going on in #Jerusalem cannot be tolerated. #Palestine pic.twitter.com/3OZ5tVvQK9

​Amid the tensions heating up in Jerusalem, reports emerged in Israeli media claiming that several "Palestinian gunmen" headed to Jerusalem to carry out a terror attack. According to the Times of Israel, citing Israeli TV, three Palestinian assailants booked a tour that included Jerusalem and were on their way to the city at the time of a "shootout" in which two gunmen were killed and one was "critically injured".

During the Islamic holy month of Ramadan, the city of Jerusalem has seen tensions between Jews and Arabs, with Palestinians saying that Israeli police have prevented them from gathering for Ramadan evenings in the area of the Damascus Gate. Tel Aviv has limited the access to the holy sites, due to coronavirus-related restrictions.

A round of Palestinian protests was triggered in Israel as the IDF claimed that dozens of rockets were launched toward Israel from Gaza in late April.