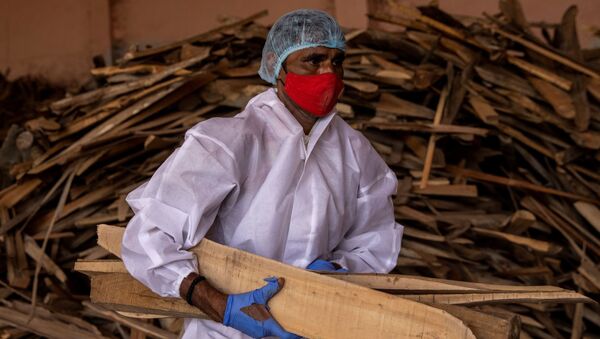 The global coronavirus tally is now well over 153 million cases, and the global death toll has surpassed 3.2 million, according to Baltimore, Maryland's Johns Hopkins University.

The United States is currently the worst-hit nation, with over 32.4 million infected, while the death toll in the country is at 577,500. Next comes India, which is now facing a major surge in COVID-19 numbers and a lack of medical equipment, with more than 20 million cases and 218,000 deaths. At the same time, Brazil has over 14.7 million infected and around 408,000 deaths.

WASHINGTON (Sputnik) - The United States will in the coming two months share with the rest of the world around one tenth of its supply of vaccines against COVID-19, President Joe Biden announced on Thursday.

“We have already committed... to send 60 million doses of Astra Zeneca vaccines to other countries starting this month and ending in June. That means of all of the vaccines we will have produced for the United States at that time we will have given about ten percent to the rest of the world,” Biden said.

He described it as “a significant humanitarian commitment” in addition to US funding of COVAX, an international mechanism of purchasing vaccines for underprivileged countries.

The United States is working to send $20 million worth of novel coronavirus medications to Brazil to help fulfill hospital shortages of supplies in the Latin American country, White House Press Secretary Jen Psaki said on Tuesday.

"We are working to partner with the government of Brazil and the Pan American Health Organisation to finalise access to $20 million worth of intubation medications needed to save Brazilian lives", Psaki said in a press briefing.

Moreover, Psaki said the US administration hopes to have 10 million doses of the AstraZeneca COVID-19 vaccine available for global supply in the coming weeks, as well as an additional 50 million more available in the coming months.

Brazil comes second in terms of global death toll following the United States with more than 575,000 fatalities, and third in terms of the number of confirmed cases after the US and India.

"Today, on 4 May, Armen Grigoryan has received a shot of the Sputnik V vaccine against COVID-19", the statement said.

Grigoryan followed suit of Armenian Deputy Prime Minister Mher Grigoryan, who got a Sputnik V shot earlier in the day.

As part of the fight against the coronavirus, Armenia has introduced quarantine until 11 July. The country with a population of about 3 million people has recorded over 217,000 COVID-19 cases to date, including more than 4,100 fatalities.

A near majority, 49 percent of US adults, believe those fully vaccinated against COVID-19 should continue wearing masks in public, a Rasmussen Reports poll said on Tuesday.

“The good news is that half of Americans now believe we are winning the war against COVID-19. The bad news is, nearly half still want you to keep wearing a mask, even if you’re vaccinated against the virus”, a press release explaining the poll said.

In addition to the 49 percent who want the faces of vaccinated Americans covered in public, 54 percent say masks should be worn by those who have contracted COVID-19 and recovered, the release said.

Many US states have ended facemask requirements for fully vaccinated people when outdoors and away from crowds, although mask rules in most cases remain in places for shoppers inside stores and at other indoor locations.

The poll also revealed 50 percent now believe the US is winning the war against COVID-19, up from just 28 percent in January. Another 26 percent say the nation is losing the war while 25 percent are not sure.

Despite the optimism, 58 percent of Americans expect they’ll be required to wear masks in public places for at least another six months, including 25 percent who expect mask mandates to last 18 months or longer, according to the release.

The government of Spain's autonomous community of Catalonia will not prolong the coronavirus curfew after 9 May, and will reopen the borders of the region for all arrivals, Catalonia's acting president, Pere Aragones, said on Tuesday.

On 9 May, Spain will abandon the high alert regime which was imposed in late October. This includes the cancellation of curfews introduced in various regions, though the authorities of autonomous communities may decide to prolong curfews in their territories and introduce other restrictive measures approved by the country's Supreme Court.

"After analysing the epidemiological data and taking into account a good pace of vaccination, starting on Sunday, 9 May, night curfews will be cancelled, and entry and exit from Catalonia will be restored", Aragones said at a press conference.

Since the beginning of the pandemic in Spain, more than 3.5 million people have been infected with the coronavirus, and over 78,200 have died. A high-alert regime has been introduced in Spain, a curfew is in effect, and movement between autonomous communities is restricted.

Aragones noted that sanitary measures may be revised again in case the epidemiological situation worsens.

"We have two confirmed outbreaks related to the Indian virus mutation", he told a news conference.

The clusters are located in Warsaw and Katowice. The variant was found in 14 samples from these locations.

A Polish diplomat who was evacuated from India last month together with his wife and four children also tested positive for the Indian variant.

Niedzielski said that people arriving from India, Brazil and South Africa will be tested for the coronavirus and quarantined for longer than the usual 10 days.

Veteran Indian badminton player and father of Bollywood actress Deepika Padukone, Prakash Padukone, has tested positive for COVID-19 along with other family members, including his wife Ujjala and second daughter Anisha.

NEW DELHI (Sputnik) - Eight Asiatic lions at an Indian safari park have tested positive for the coronavirus, the first such case in the country, the media said.

There are twelve lions in the forty-acre safari area of the Nehru Zoological Park in the southern city of Hyderabad, according to The Times of India. Four males and four females have been infected.

Zookeepers first noticed symptoms of a respiratory disease in the big cats on 24 April, the paper cited sources as saying. Veterinarians took swabs for PCR testing that came back positive.

A laboratory will do genome sequencing to determine whether the virus came from humans. The paper said that over 25 zoo employees recently tested positive. The zoo was closed to the public last week.

"The situation in many countries shows that vaccines are far from a panacea", an article in the official paper of the ruling Workers' Party said.

"Over the past day, 7,770 coronavirus cases were confirmed across 82 Russian regions, including 945 cases (12.2%) without clinical symptoms", the coronavirus response centre said, adding that the rate of increase was at 0,16%.