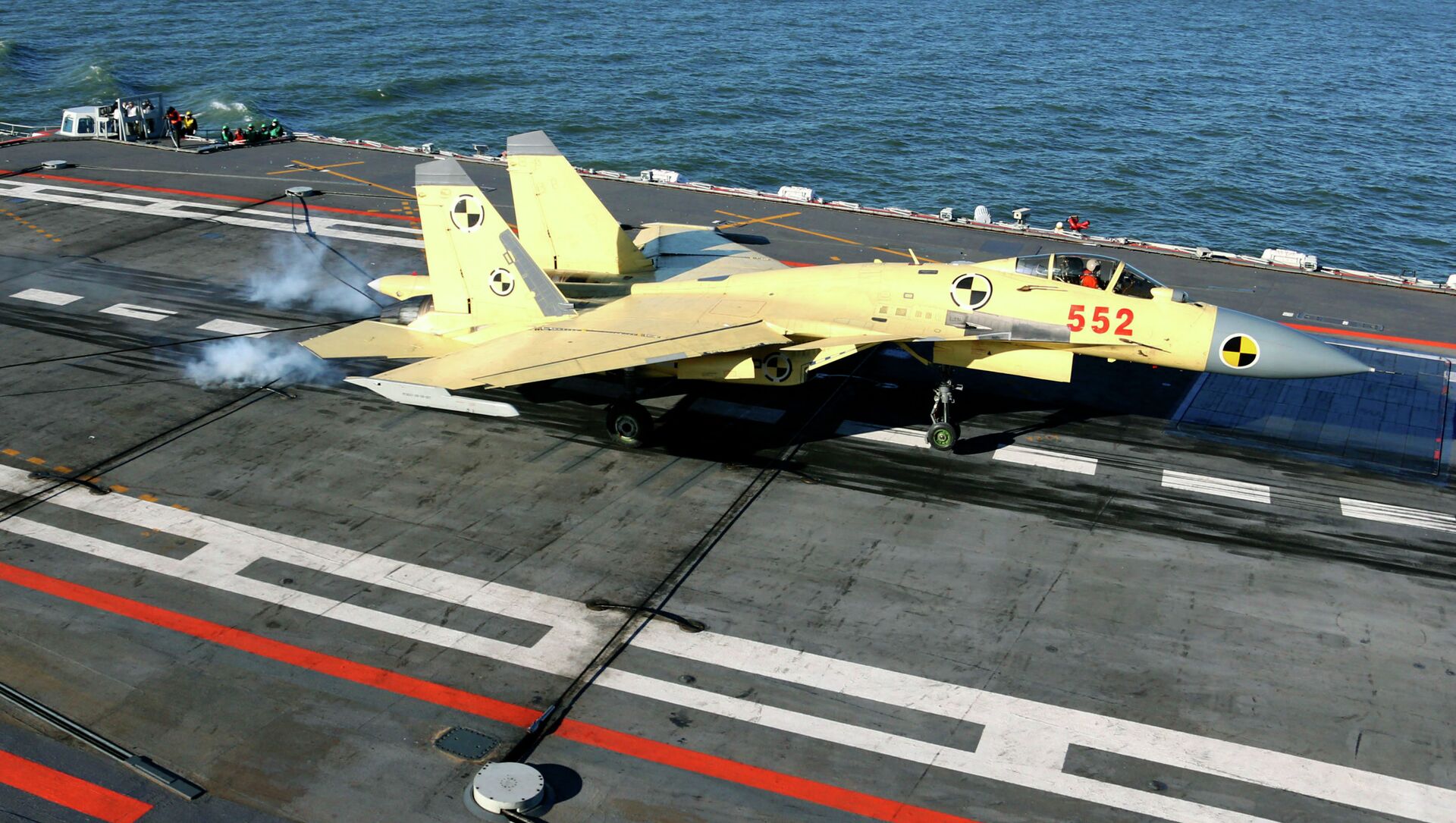 Morgan Artyukhina
All materialsWrite to the author
China’s navy is already more numerous than the US Navy, but its blue-water power projection is only beginning to emerge as it rapidly modernizes and, more importantly, builds new aircraft carriers and large strike ships.

After a month in which the US Navy held intense drills in the South China Sea, the People’s Liberation Army Navy (PLAN) held its own exercises using its first aircraft carrier of indigenous design, the Shandong.

PLAN spokesperson Gao Xiucheng said Sunday that the Shandong and its strike force had completed drills in the waterway, which sits south of mainland China and in which Beijing has claimed several chains of tiny islands.

“We hope the outside world can view [the Shandong’s exercise] objectively and rationally. The PLA Navy will continue to organize similar exercises according to the plan regularly in the future,” Gao said, as quoted by the Global Times, adding that the drills were “legitimate and can enhance Chinese capabilities to protect national sovereignty, security, and development interests.”

The ship was spotted leaving the port of Sanya on Hainan on April 28 by commercial imaging satellites before beginning drills. The ship was also noted as leaving port shortly after the Type 075 amphibious assault ship Hainan, recently commissioned in the PLAN, also set sail. Hainan did not participate in the drills.

​Shandong was launched in 2017 and commissioned in December 2019. The 70,000-ton carrier can carry up to 44 aircraft, most of which are J-15 “Flying Shark” multirole aircraft, but some of which are helicopters. It has a bow ramp for launching aircraft instead of the catapult system US and French carriers use, but uses arresting wires for recovering aircraft in the same way as them. However, China’s next carrier, the forthcoming Type 003, is expected to use an electromagnetic catapult launch system.

In early April, China’s other carrier, the Liaoning, on which Shandong was heavily based, took a combat force into the Philippine Sea and held its own drills, which US warships followed so closely they caused deployment issues for the carrier and prompted an official rebuke from Beijing.

“The aircraft carrier is not a ‘homebody’ and it will be the norm for the aircraft carriers to sail far away,” Senior Colonel Wu Qian, a spokesperson at China’s Ministry of National Defense, told reporters last week in response to a question about whether carriers could be expected to engage in such training in the future. 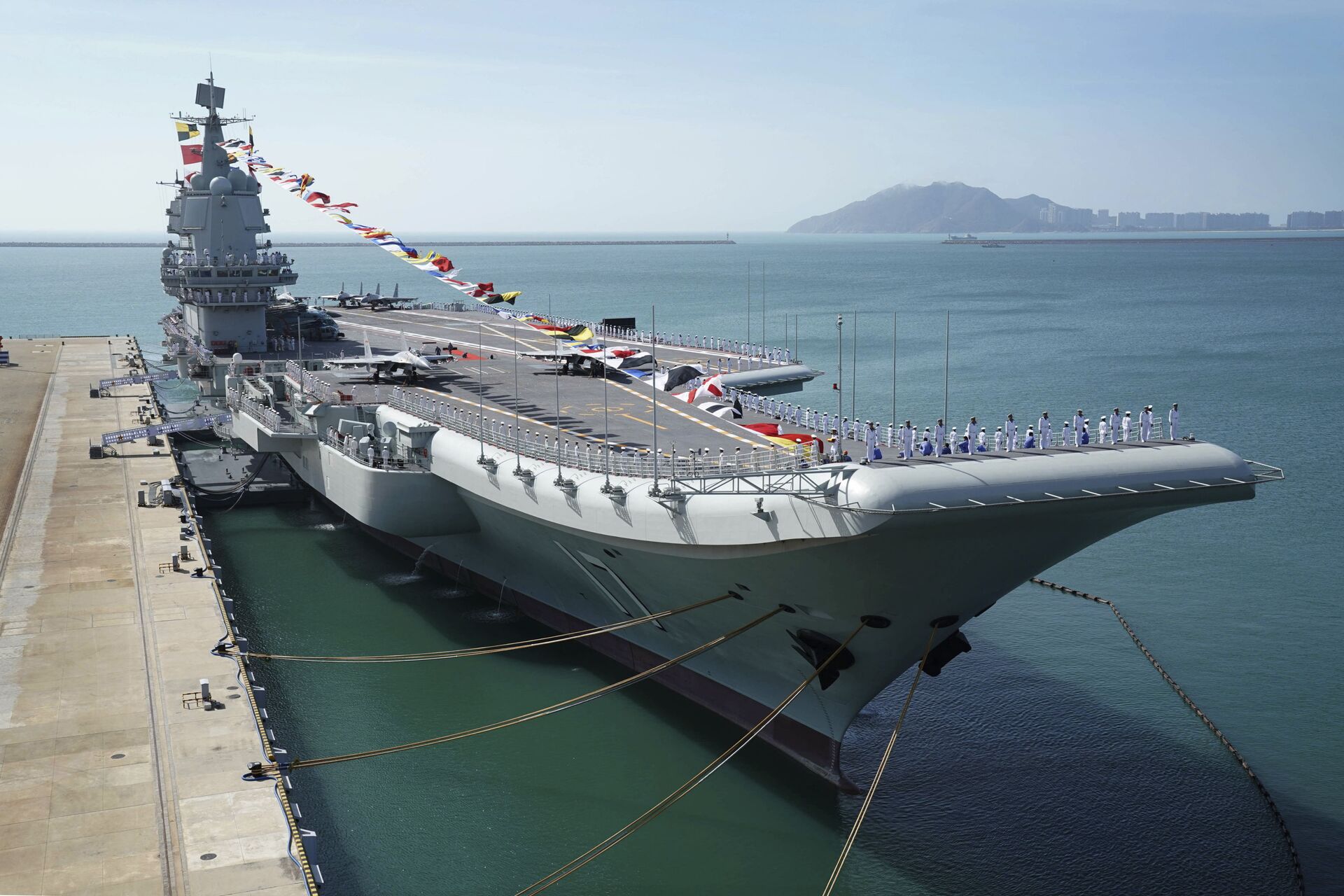 Those drills, in turn, coincided with and partially followed drills in the South China Sea by the US Navy’s aircraft carrier USS Theodore Roosevelt and amphibious assault ship USS Makin Island, which rehearsed airstrikes and amphibious deployments against Chinese-controlled islets in the waterway.

Last year, the Trump administration formally laid out its objections to China’s claims to control four archipelagos in the South China Sea and the seas surrounding them, to which several other nations have also laid claim, including Taiwan, the Philippines, Vietnam, Malaysia, and Brunei. This followed a strategic shift by the US that prioritized the “Indo-Pacific” region and “great power competition” with Russia and China over the War on Terror being waged primarily in the Middle East. Since US President Joe Biden took office in January, he has only doubled down on that drive, pledging to “maintain a strong presence” near China, with which the US is in competition “to win the 21st century.”