Activists in NY Call on US to Stop Supporting Kiev, Draw Attention to Odessa Massacre 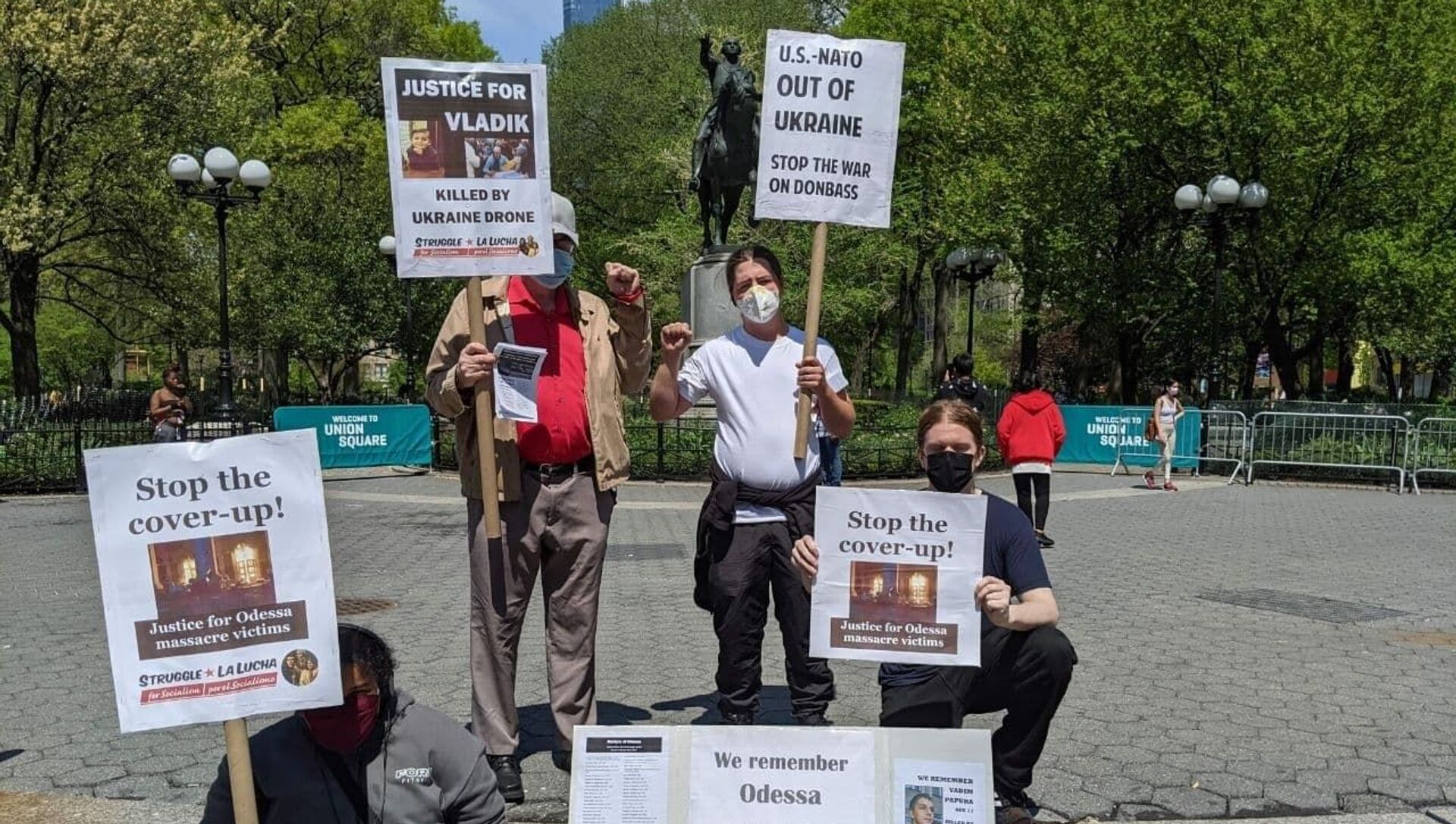 © Photo : Organizers of memorials for the victims of the 2014 Odessa massacre
Subscribe

NEW YORK (Sputnik) - A memorial for the victims of the 2014 massacre in the city of Odessa has been organized at New York’s Union Square, Greg Butterfield, a coordinator for the "Solidarity with Novorossiya and Antifascists in Ukraine" movement, told Sputnik.

On May 2, 2014, Ukrainian nationalists locked pro-federalism protesters in Odessa's Trade Unions House and set the building on fire. Almost 50 people died and some 250 protesters were injured in clashes with the radicals, according to the United Nations.

"We feel it’s important to remember the more than 40 anti-fascists who died, and also to inform the public here about the U.S. government’s role in supporting the right-wing regime in Kiev," Butterfield said.

He told Sputnik that on Sunday, activists organized events in at least 20 cities across Europe and North America in order to draw attention to the conflict in southeastern Ukraine (Donbas). During the Sunday memorial in New York, they held banners reading "[US President Joe] Biden and [Ukrainian President Volodymyr] Zelensky: Hands off Donetsk and Lugansk!", "Stop the cover-up! Justice for Odessa massacre victims", and "US-NATO Out of Ukraine!"

"What is astonishing is how completely U.S. corporate media have erased the Odessa massacre from history. So it is an uphill battle, but an important one, to break the information blockade. Today we had several good conversations with people who passed by the memorial about these issues. We will continue organizing to build solidarity with the anti-fascist people of Donbass and Ukraine and to oppose US-NATO war moves against Russia," Butterfield told Sputnik.

He stressed that the ongoing conflict in the southeastern Ukrainian regions of Donetsk and Luhansk is a major threat to global security.

"The Ukrainian state and neo-Nazi groups continue to repress opposition in Ukraine. They continue the brutal war against the people in Donetsk and Lugansk. Washington and its NATO allies continue to arm and finance this war. Only a week or two ago, U.S. and Ukrainian escalation in the region threatened to plunge the world into war," Butterfield said. 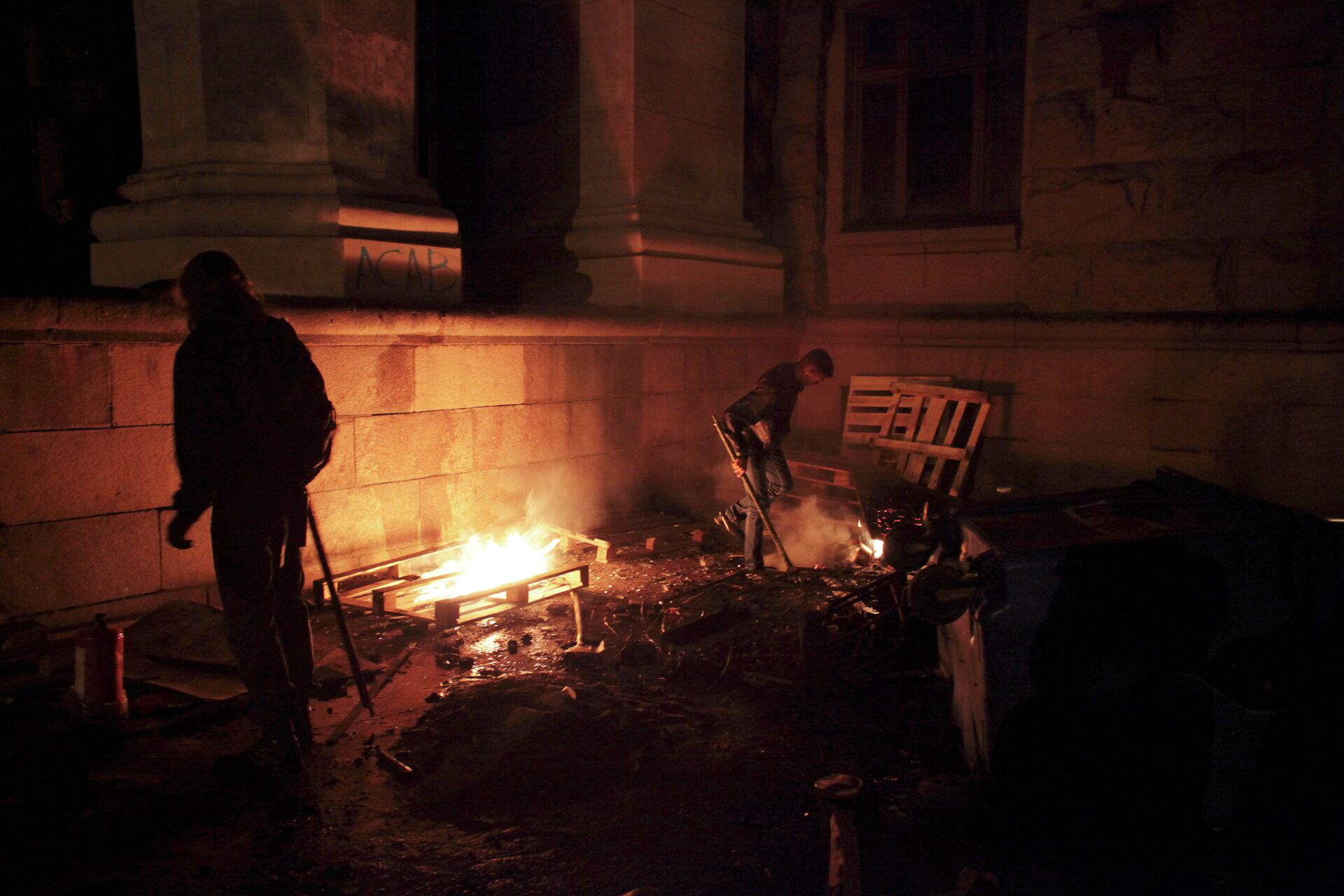 Pro-Ukrainian supporters sort through rubbish outside the burnt trade union building where more than 30 people died trying to escape during clashes in Odessa, Ukraine, on Friday, May 2, 2014
© AP Photo / Sergei Poliakov

He warned that the military campaigns the US has carried out abroad and the ongoing proxy wars will only exacerbate domestic problems.

Israel Troubled by Rally of Ukrainian Nationalists Marking Creation of SS Division
"In 1967, Dr. Martin Luther King Jr. said, ‘The bombs dropped in Vietnam also explode here at home.’ That is still true. US military bases, proxy wars and sanctions hurt people around the world, but also hurt people here by taking money away from improving healthcare, housing, education and other urgent needs of the people. When the US supports fascist groups in other countries to enforce its will, that also comes back with the spread of far right and white supremacist groups here. When the US  economy grows more and more dependent on the military industry, it leads to the militarization of the police and encourages them to act like an occupying force," Butterfield told Sputnik.

The ongoing conflict in southeastern Ukraine, where the Ukrainian military launched a special operation against the self-proclaimed Donetsk and Luhansk people’s republics in 2014, has killed thousands of people. The Normandy Four format , which includes Russia, France, Germany, and Ukraine, was established in June 2014 to mediate the conflict after the regions of Donetsk and Luhansk, known together as Donbas, proclaimed independence following what they considered to be a coup in Kiev in February of that year. Despite several ceasefire agreements reached under the Normandy format, the Donbas conflict continues.

Activists from the "Solidarity with Novorossiya and Antifascists in Ukraine" movement are calling for an end to violence in Ukraine's southeast.